AFTER 15 YEARS I FINALLY HAVE A “TULIP TABLE”. 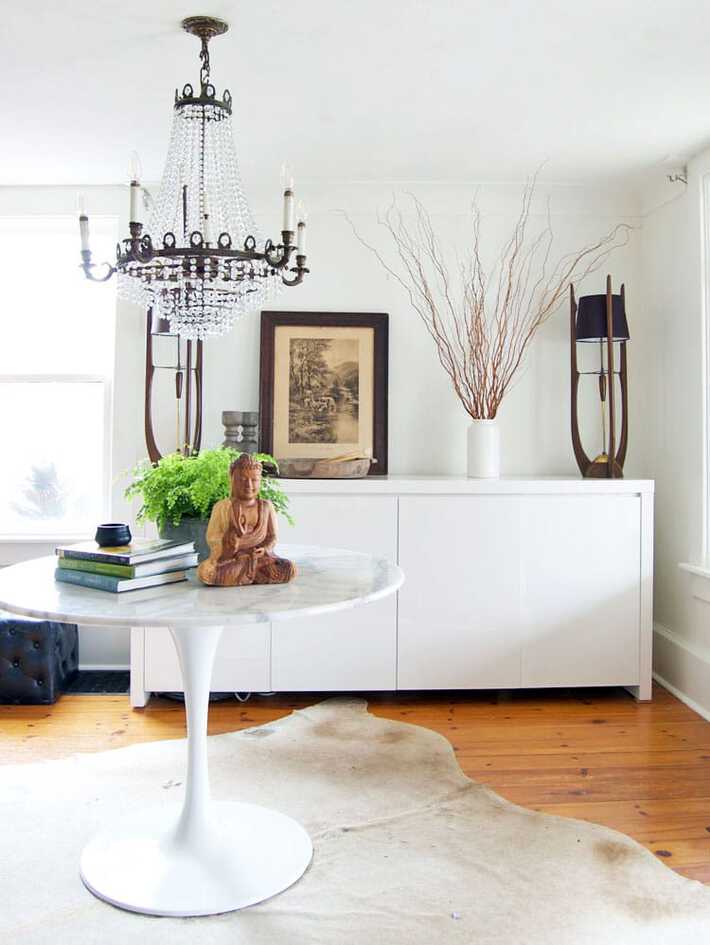 I could have started this post with any manner of clever sentences, stories or jokes but this is what’s know as an auspicious occasion and it deserves the reverence reserved for such times in history.  You’ll notice I didn’t even include an exclamation point at the end of my first sentence which obviously would have cheapened it. 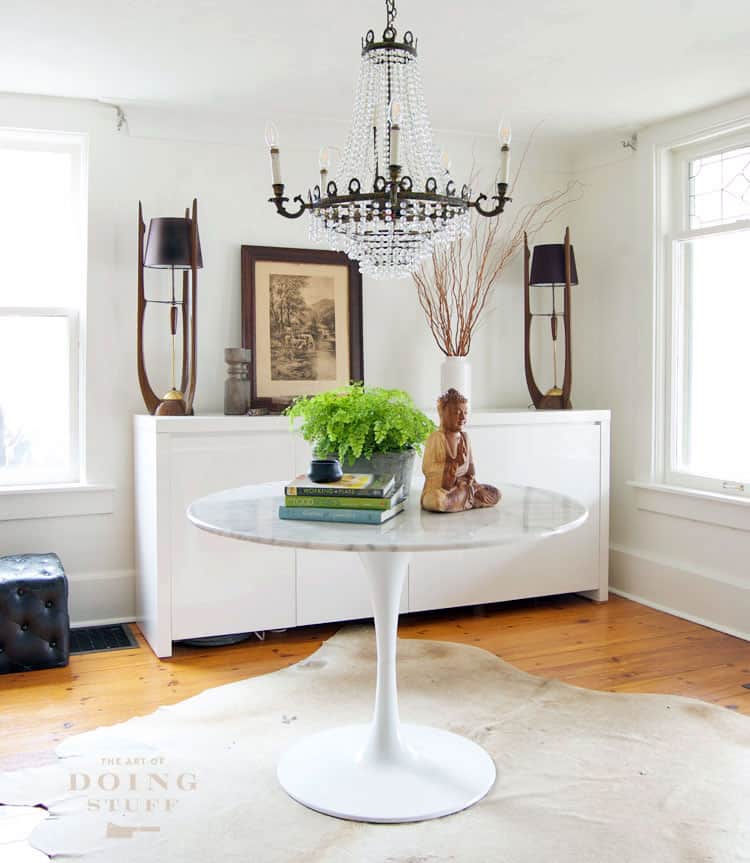 From the outside, the past 15 years of my life have looked fulfilling and happy, albeit with a few planet-sized bumps along the way, but the truth is even though everything looked great I’ve been walking around with a ragged, empty spot in my soul.   I had everything anyone could ever want, other than a tulip table.

Most people would argue that “things”, material goods, can’t make you happy and certainly can’t feed your soul, and that’s TRUE, unless it’s something you really, really, really want and has been featured on the runaway hit Mad Men. 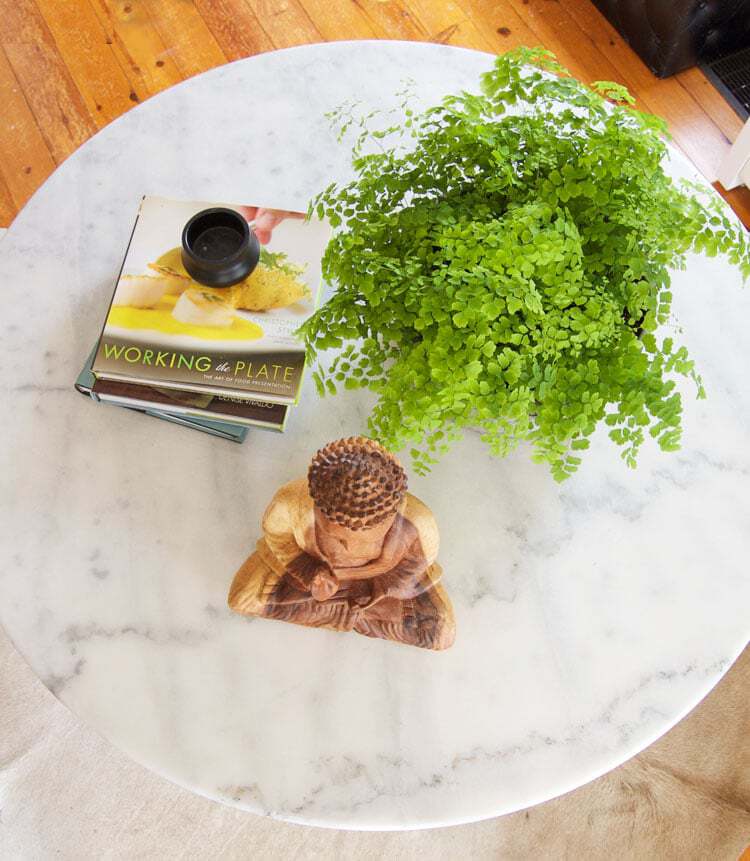 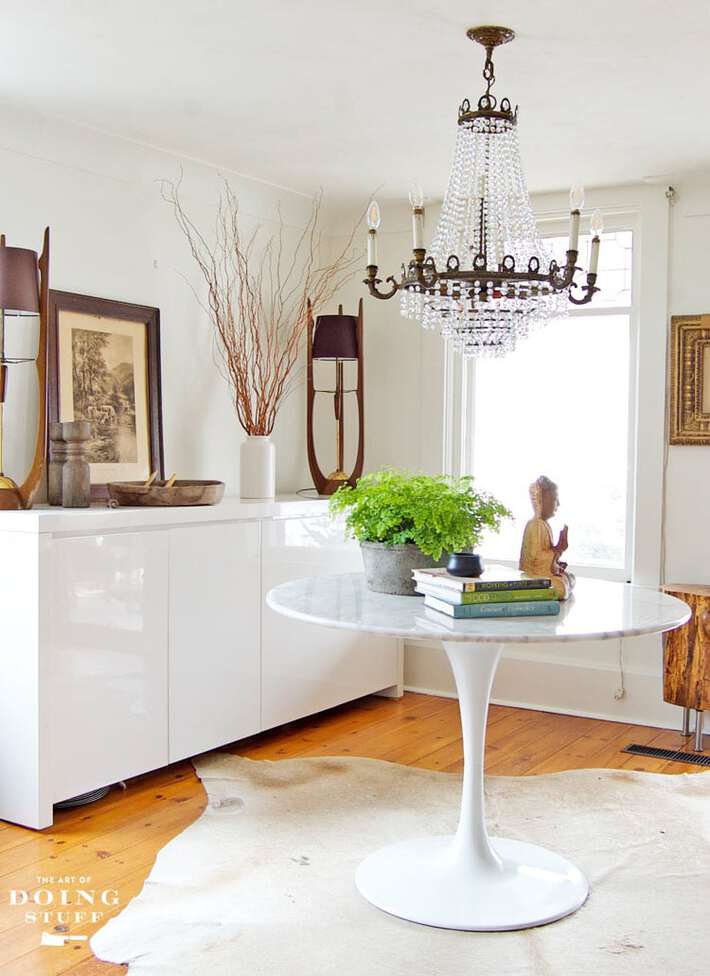 I originally wanted the table for my kitchen after borrowing my niece’s tulip table for a photo shoot of my house with Style at Home magazine.  I didn’t find one for the price I wanted and time passed until I eventually redid my kitchen with the help of designer Carol Reed’s e-design service and there was no room for any table at all.

But last November I redid my foyer and dining room and that resulted in 2 things; a) a fleeting romantic delusion about living in a condo, giving up doing stuff and instead spending my nights relaxing and posing my cats in famous scenes from the show FRIENDS  ( “Turkey on the head” is first on the list) and b) acquiring enough room and the right spot for a tulip table.

4 months ago my mother spotted a tulip table at Homesense (Homegoods) for $1,100.  Too much.  I didn’t want to pay it.  My soul would have to survive all ragged and empty.

Just before Christmas I saw the same table, still at Homesense on sale for $900.  Getting closer but it was Christmas and my pockets held only lint.  Plus at 48″ across the table was too big.  I could technically fit it in my front hall but it would actually be too large for the space.

I ran up there right away, I mean I can only be expected to have so much self control, and took a look. It had a bit of a ding on its base and the top had more than a few scratches.  PERFECT.  NOW I WOULDN’T HAVE TO WORRY ABOUT SCRATCHING IT MYSELF BECAUSE IT WAS ALREADY SCRATCHED!

There was still the issue of size though.  Then it dawned on me that I could take the marble top to a marble place and have them cut it down to a better size for me.  I wanted to take the top from 48″ to 42″ in diameter.

I made 6 phone calls and NO one would cut the top down for me. No one.   Marble is soft and easily broken.  Therefore most natural stone companies don’t want to bother with what is both a small job and one that could end up costing them a lot of money if they ended up breaking the tabletop.

Finally on my 7th phone call I had success with a small natural stone store local to me. My new best friend Madison from  Take Us For Granite was my saviour.  Yes indeed, they would cut the marble down to size for me.  That’s often the difference between a huge company and a small family owned store. The family owned operations are usually more likely to do the small jobs that bigger companies won’t bother with.

After meeting my mother up at Homesense and laying down the $350 for the table, we whisked it up to the guys at Take Us for Granite (my new favourite people in the world) where the son hauled it out of my mother’s CRV and brought it into his father to get a price on cutting it down, and a timeline for how long it would take.

Just to be smart I asked how much it would cost to just buy a 42″ piece of round Carrera marble.  It would be $900, so cutting my piece down was definitely the way to go.

The table top hadn’t been affixed to the table properly to begin with so before I left Take Us for Granite they even gave me a tube of their construction grade silicone to re-adhere the top to the base when I got home. 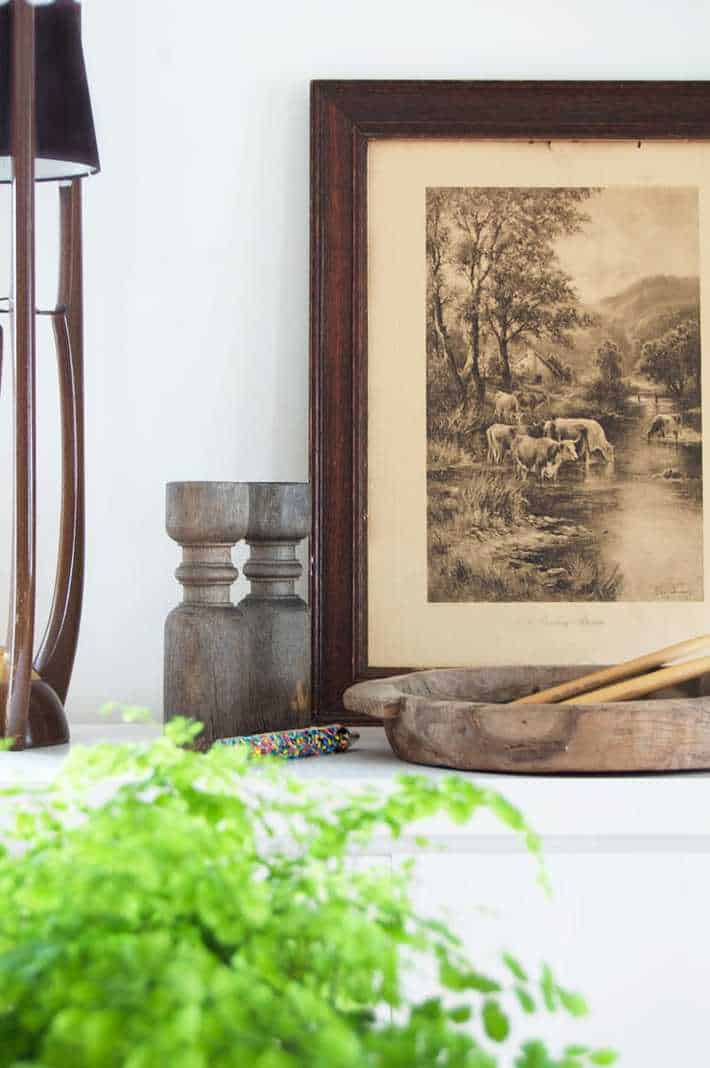 I was so happy and after 6 other phone calls, so SURPRISED that Take Us for Granite would actually do the job for me and do it right away that I promised I’d tell the world about them and how great I think they are.  Just like KellyAnne Conway did for Ivanka Trump’s clothing line, only more legal.

So if you’re in my general area and you need anything marble fixed or replaced or are looking for stone countertops or anything else granite/marble/Corian etc. related … tell ’em Karen sent you.

O.K.  That’s all.  Sorry …  I forgot to mention that Sam, the son, isn’t shy about randomly whipping off his jacket to show you his flexed muscles if you want while you’re up there, so there’s that if you’re into that sort of thing. 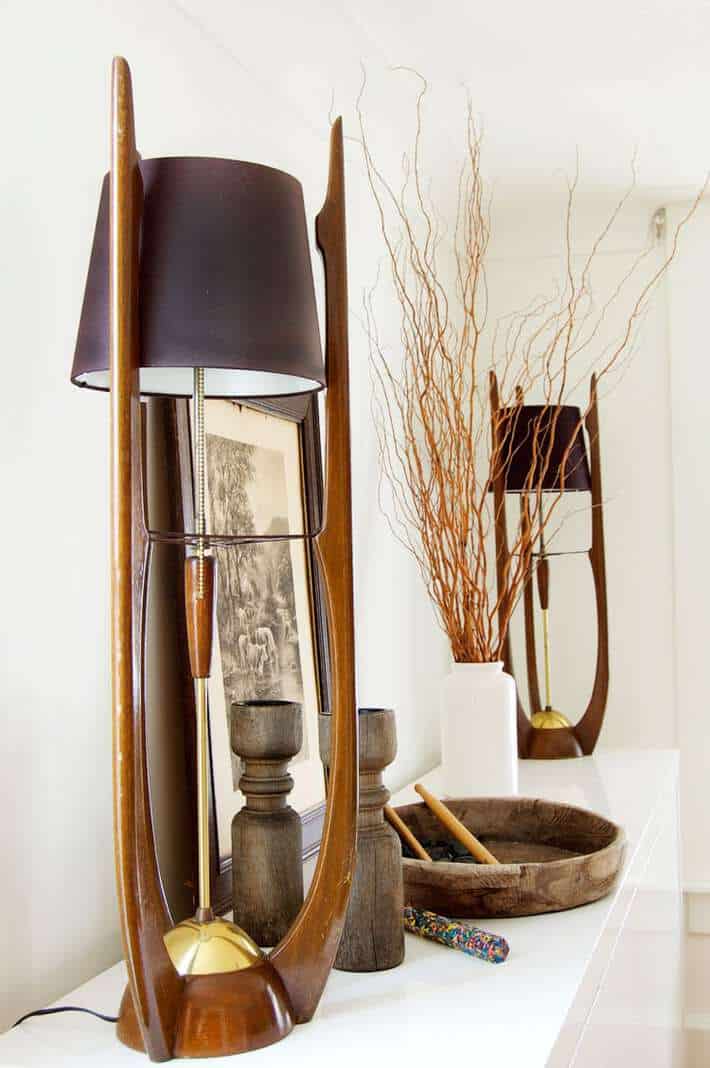 But having the Tulip Table meant I could finally pull out these Midcentury Modern lamps that I’ve been storing in my basement for the past 15 years waiting for a time when I’d actually be able to incorporate them into my decorating.

Some of you like these lamps and some of you hate them.  I get that.  They’re not for everyone.  Only for those of you with exceptionally good taste.  Just kidding.  No I’m not. 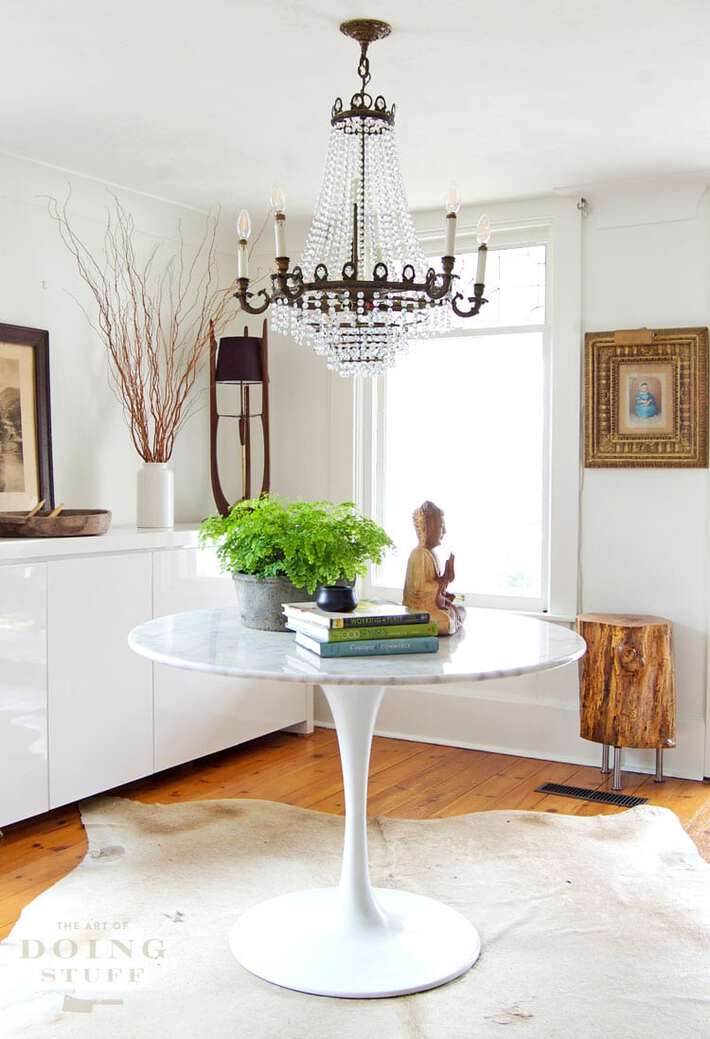 I still have a bit of layering to do and new wood shutters (hopefully) to make for the windows but the room is getting closer to what I envisioned.  The one last thing I’d like to add in is a reading chair.  My initial want was a copycat Eames lounger (more on that in Friday’s post), but with already having the Midcentury lamps and the table, I’d probably rather go with something like a men’s club chair.  Something leather, worn and cracked in black or a caramel colour. 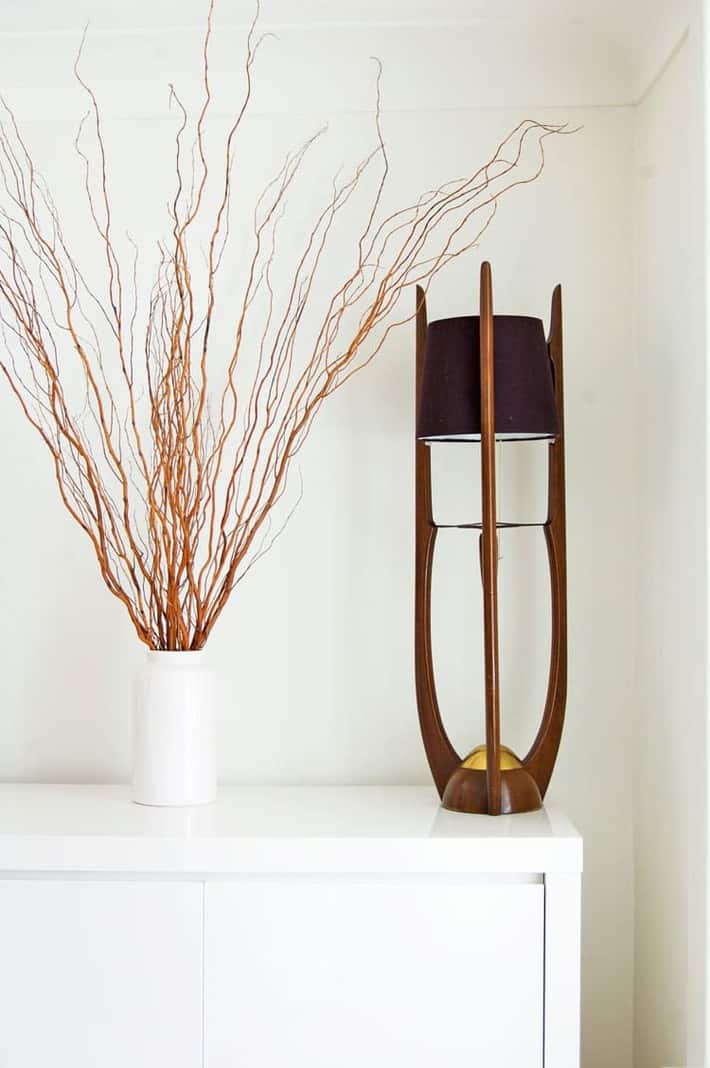 So the table I’ve wanted for the past 15 years ended up costing $750 in the end.  Not dirt cheap but buying it this way had 2 benefits.  First of all, even at $750 the table was half the price of the cheapest knock off.  And since I’ve wanted and adored it for 15 years I know it isn’t a whim. It isn’t something I’m going to get sick of in a few years.

Second of all, even if I COULD have found a tulip table on-line for the same price, this solution had a very important benefit.  I had seen the table in person.  Every piece of marble is different with its own personality.  If I’d ordered the table online I wouldn’t know what I was getting in terms of marble. I could have hated the pattern or colour variations in it. 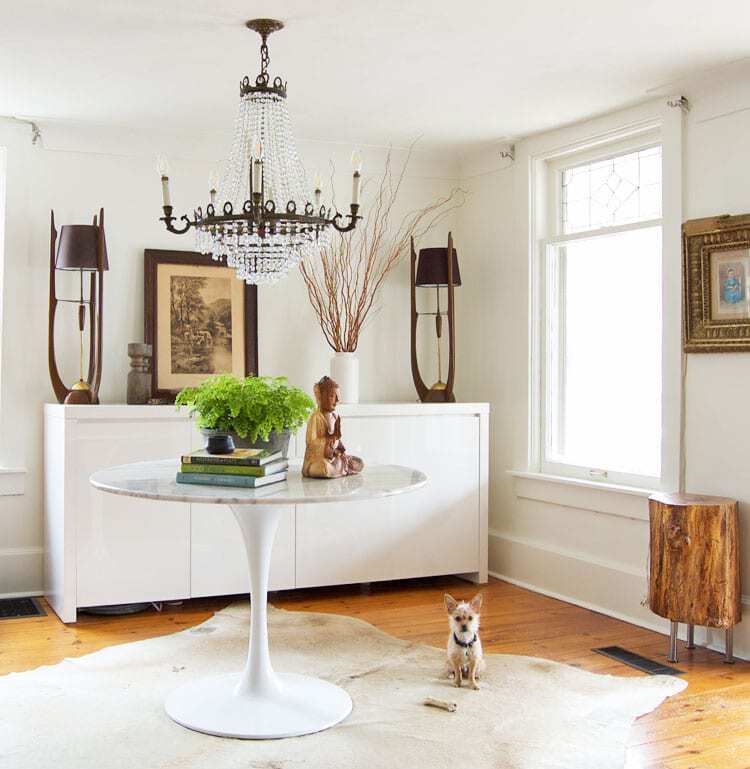