The second most magical thing about the Instant Pot is the pulled pork apparently.  I cook my pork in a smoker and even though I'll try it in the Instant Pot, I can guarantee I won't become an Instant Pot convertee when it comes to pork products.  Much like dry ice ... what makes pork magical is the smoke.

I told you a couple of weeks ago that I'd be testing out the Instant Pot for a month before I reviewed it.  I'm a little more than halfway down the Instant Pot rabbit hole and figured you'd be wondering how it was going and what I'd been doing with it. 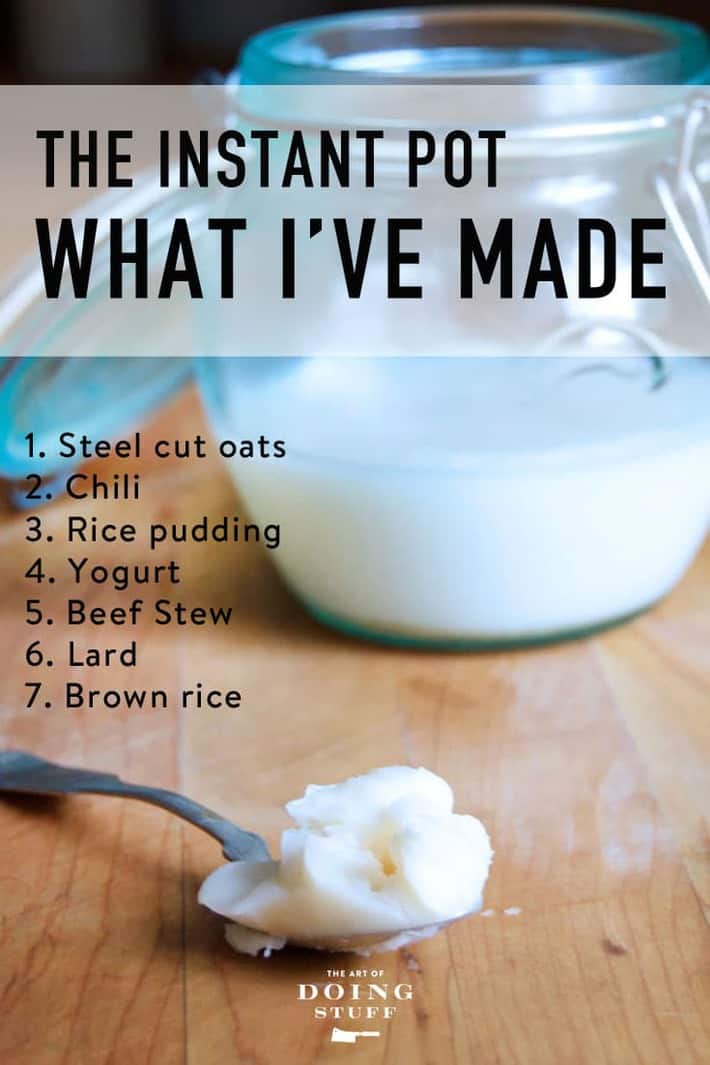 I have vague criteria for whether or not things get a passing grade.  Like does it taste good?  Is the texture right?  Is it actually easier than how I normally cook the thing or is it just a different way to cook it?  And of course, speed.  Plus there's just that general gut feeling, like Yeah that was worth it.  Or Wow that was stupid.

Wow that was stupid was my immediate thought after making yogurt in it.  Although, I gave it another shot and my reaction was Yeah, that was worth it.  The one thing that was, is and will always be stupid about the Instant Pot is their instructions and the recipe book that comes with the pot.  It is, without a doubt, the worst I have ever read.  It doesn't explain anything properly, doesn't really tell you how to use the Instant Pot and sometimes just flat out doesn't include necessary and useful information for someone who is using the pot for the first time.

Thank God for the people of the Internet. Without the blogs, sites and reviews of the Instant Pot on the net I would never have figured out how to do anything properly in it. That's the thing about the Instant Pot. There is a learning curve.  It isn't huge, but it's there.  It takes a few attempts at making things in the Instant Pot to understand how it all works and what the buttons all mean.

Of things things I've already made I can tell you the big winner was the chili.  It was incredibly fast, easy and had ... I hate to say this out loud but ... it had better flavour than any chili I've simmered on the stove for hours.  It was incredible. 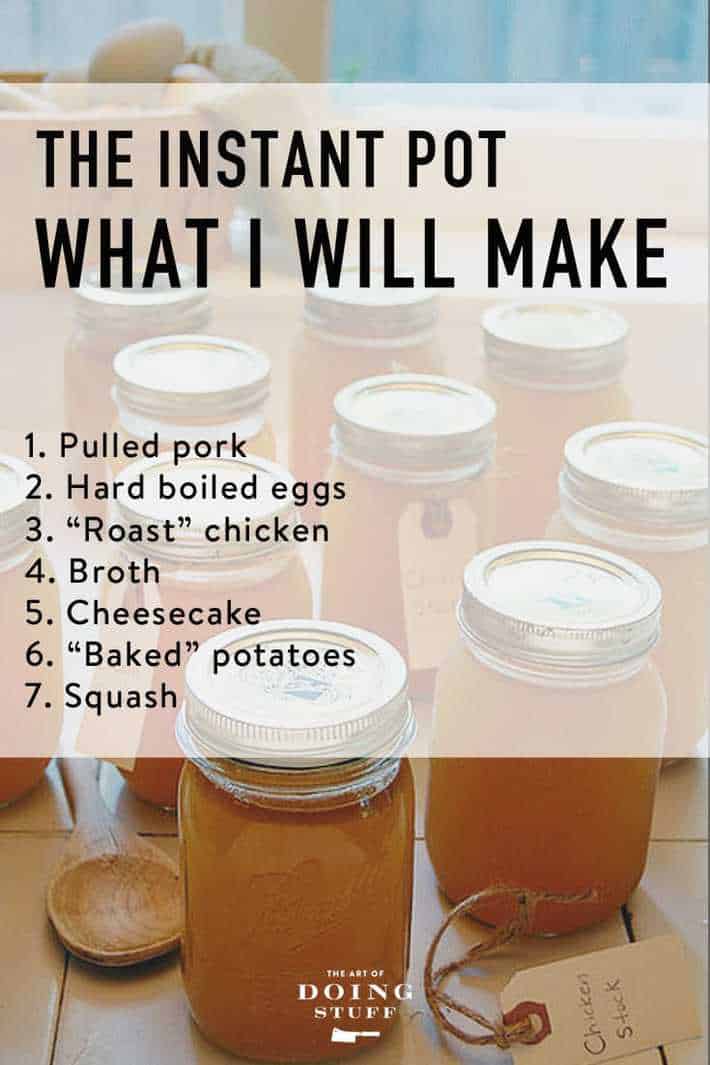 Of the things I'm going to make in the next couple of weeks I'm probably most confounded by the cheesecake.  EVERYONE talks about the Instant Pot cheesecake.  Really?  You cook a cheesecake in the Instant Pot?   Sometimes while browsing Instant Pot blogs (yes there are entire blogs dedicated to cooking with the Instant Pot) I wonder if these people aren't a bit nuts. Like Paleo people, ya know?   There are also Paleo Instant Pot people which is a whole other level of crazy with bacon on top. 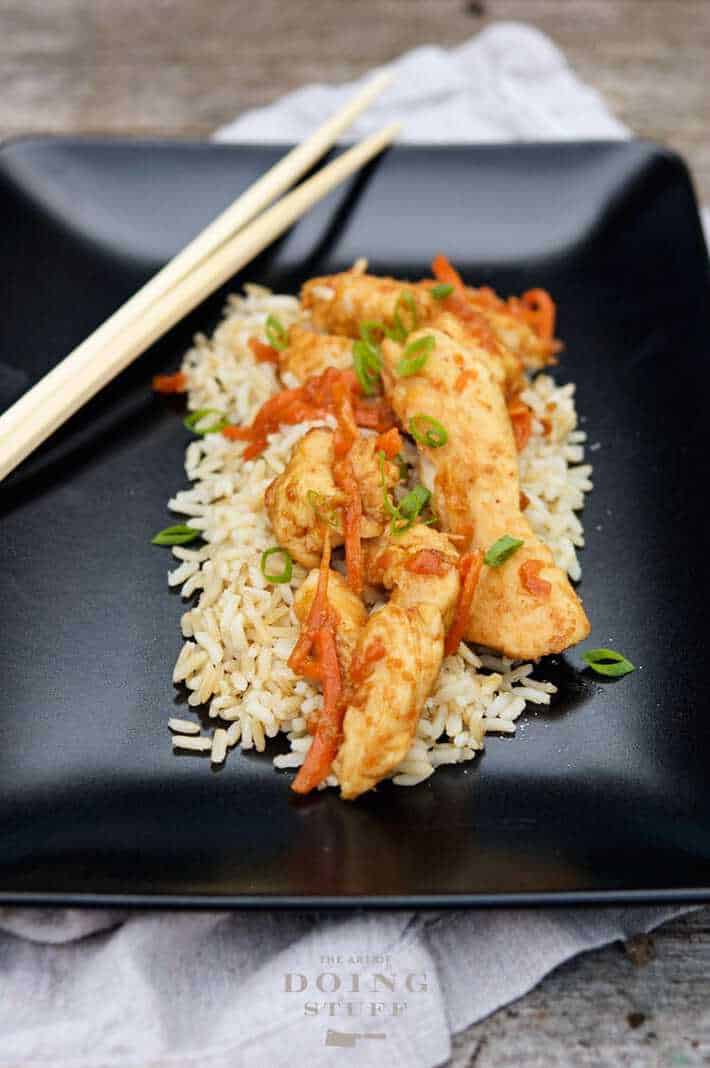 Last night I delved into the world of combining a few things because people are also always going on about one pot meals in this thing.  The chicken and rice above isn't quite a one pot meal. I cooked the rice first with a 1:1 ratio of water to rice which is recommended.  It came out nice and loose and fluffy but slightly undercooked.  Then I cooked the chicken in the Instant Pot along with some peanut sauce and julienned carrots for the recommended time of pressure cooking on high for 10 minutes.  Which had me worried since it wouldn't even take 10 minutes to cook these chicken slices in a pan.  Not even close. Plus with pressure cooking you have to wait for the pot to come up to pressure, cook for the allotted time and then release the pressure.  So we're up to around 30 minutes now for 4 little strips of chicken that could be cooked in 3 minutes in a pan.  Why they recommend 10 minutes of pressure cooking for this little bit of chicken seemed weird, but I'm no Instant Pot expert so I did as I was told.

The chicken was done perfectly.  Hard as a rock, dried out beyond belief and of a texture that closely resembled splintered, petrified wood.  Just like mom used to make.   So the chicken was a total fail.  It was edible in that I could actually chew through it, but I do have all my own teeth and very strong jaw muscles due to a lot of clenching and biting my tongue while living with the fella for 12 years.

I know the easy fix for this is to just cook it less in the Instant Pot, but seriously, it'd be way easier to just cook it in a wok or pan.  Cooking little strips of chicken in an Instant Pot that should only take a couple of minutes in a pan is just dumb.

And yet here I stand before you ... with high hopes for a cheesecake.