Have a lantern?  Load it up with forsythia branches and get your porch ready for the shortest decorating season of the year. Spring! 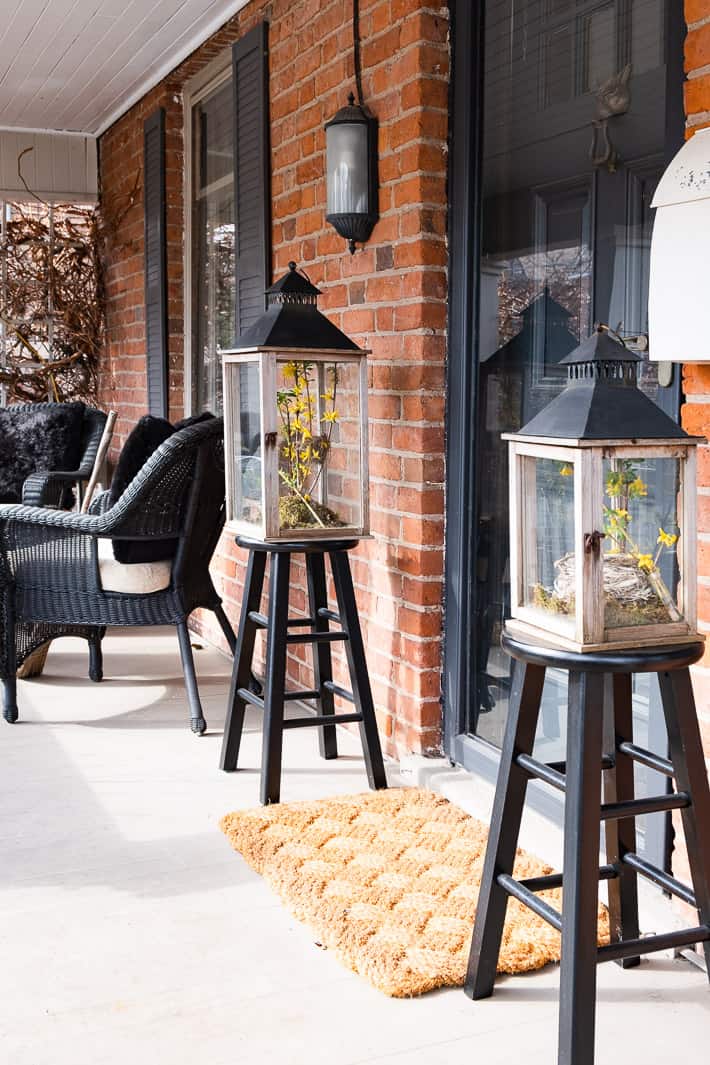 Spring, summer, winter, fall. These are the major seasonal categories for food, clothing and decorating of course.  For food you have your summer BBQs, your fall soups, your winter stews and your spring - holy hell who shrunk my pants - I'm only going to eat air.

I'm always very careful about only eating air from March to May and the air usually comes in the form of an airy pizza crust.

Summer, fall and winter I do up the outside of my house in whatever the season calls for. Ferns in summer, cornstalks in fall, garland and evergreen branches in winter.  Every year without fail I do this.

But spring?  My spring decorating outside usually consists of ripping out the crispy brown evergreen branches and trying to put a bonnet on the neighbourhood raccoon.  The season is just too short. You spend thousands of dollars on a couple of flats of pansies and before you know it, summer has hit and it's time for real flowers.  I may have exaggerated slightly with "thousands of dollars".  Maybe.

This year I upped my game though and decorated outside for spring, mainly because we all just lived through what seemed to be the longest winter in history.  It's true that by the end of March all winters seem like the longest in history, but that doesn't  make it any less true in our imaginations.

I wanted to get it cleaned up outside a bit and make it look as though Spring is more than just a figment of my imagination. All it took was some sweeping, some glass cleaner and $7 of Forsythia branches. 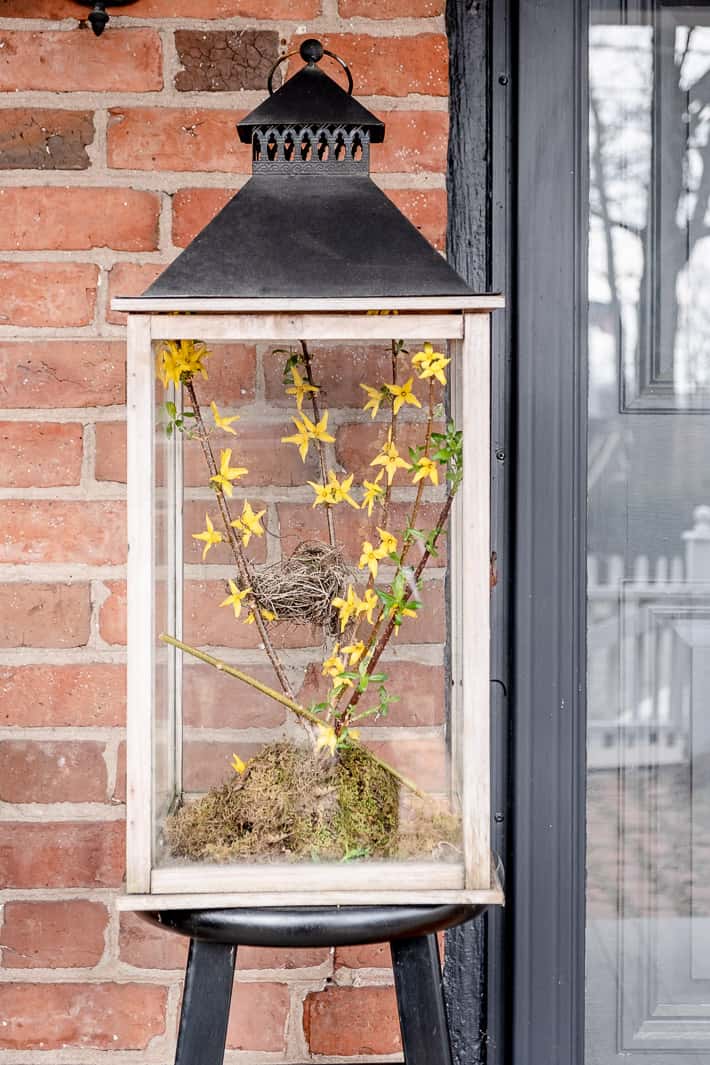 When I bought these lanterns a few years ago the woman in line behind me asked what I was going to put in them. She said she never knew what to put in them. I said, ALL KINDS OF THINGS!  You can put ANYTHING in them!!  What are you crazy??? What is wrong with you?? Have some imagination woman!!  Then I brought my limitless potential lanterns  home and promptly put a candle in each of them and left them like that for approximately 12 seasons.

This winter I finally realized I wasn't exactly letting my lanterns live up to their true potential.  I filled them with copper lights and bristle brush trees for Christmas and they were positively glowing with pride. 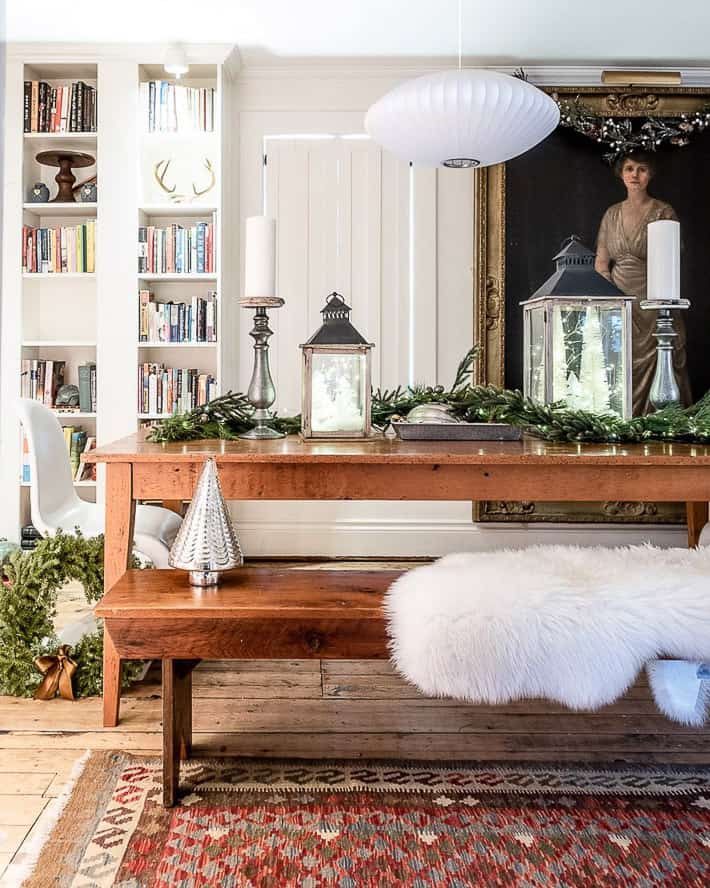 Last week I dragged them out of the basement and decided if I could make them look good for around $10 I'd actually "Spring decorate" my porch. 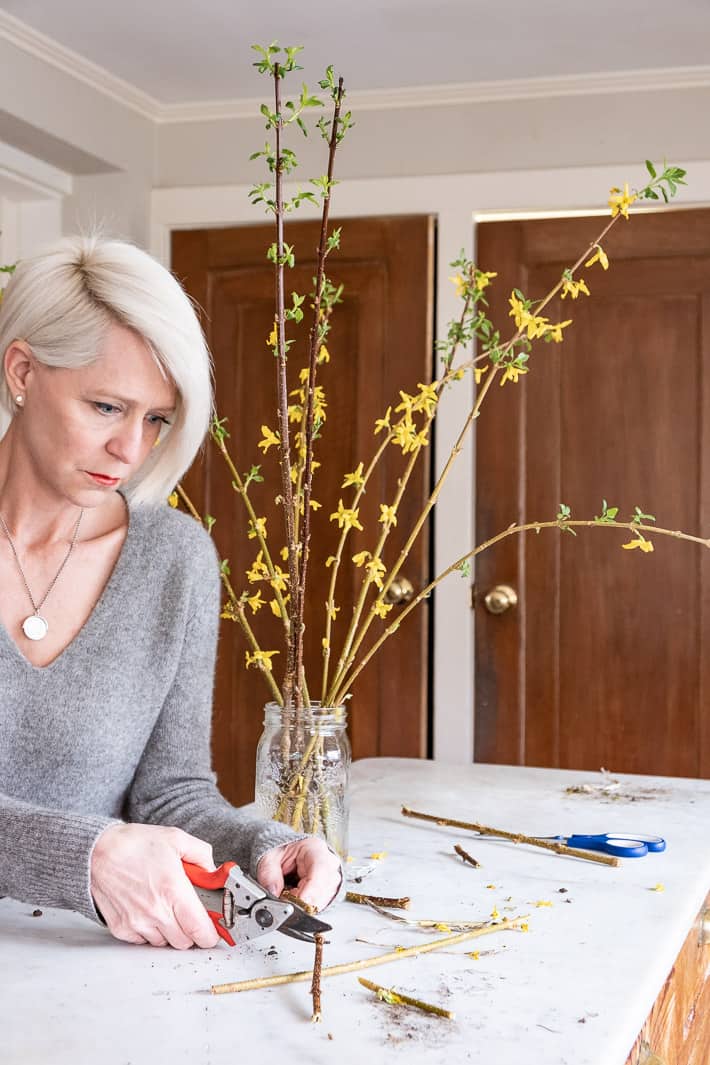 And if you happen to have one of these lanterns and YOU don't know what to do with it, you can do it too for around $7.  That's what one bunch of Forsythia branches cost me. 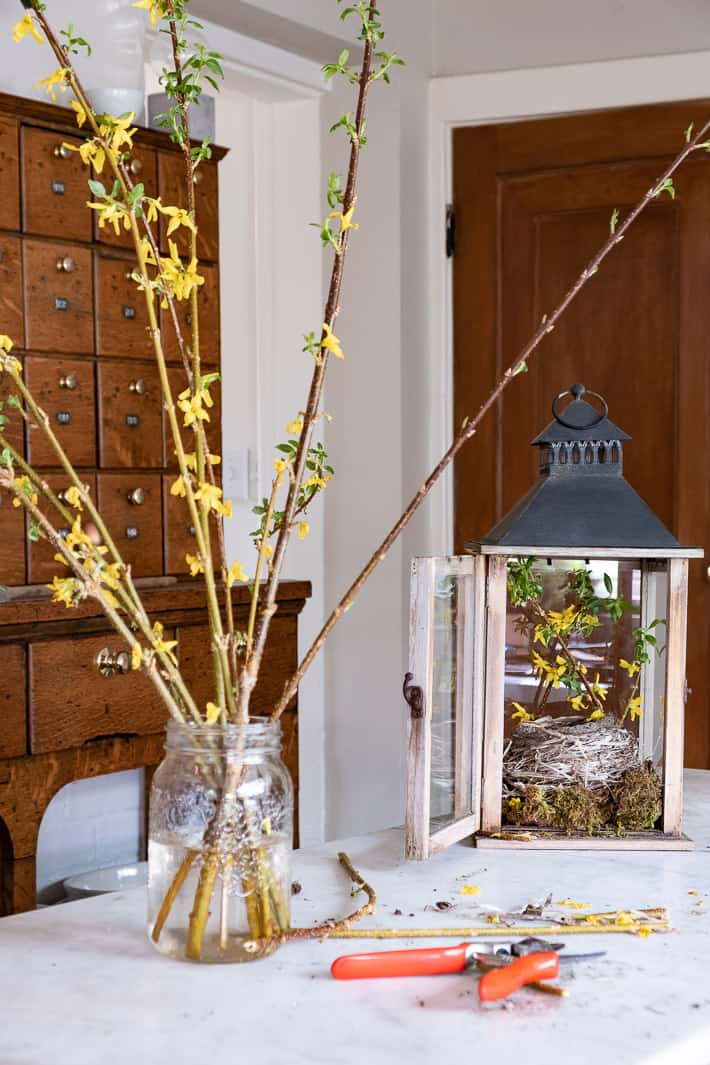 Now, I did add some moss I had in the basement and a couple of birds nests that I have.

If you don't have moss you can use a square of fake grass on the bottom, but you will need something to cover up whatever you  use as a water reservoir for the branches.  I used a very short mason jar and then just covered it up with the moss. 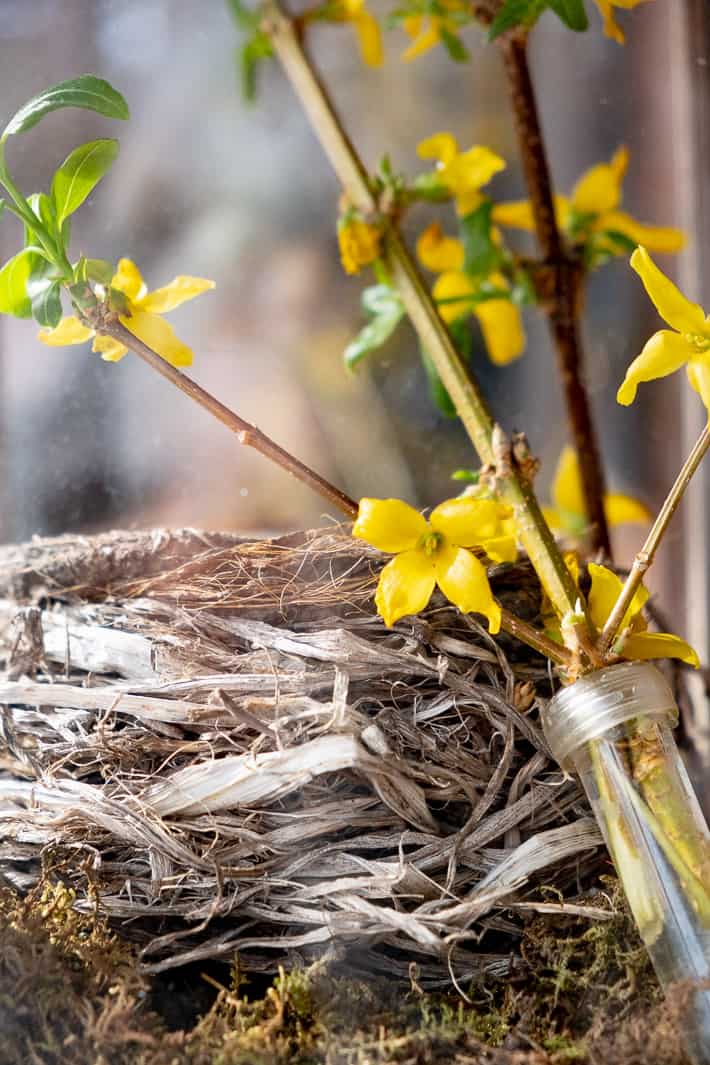 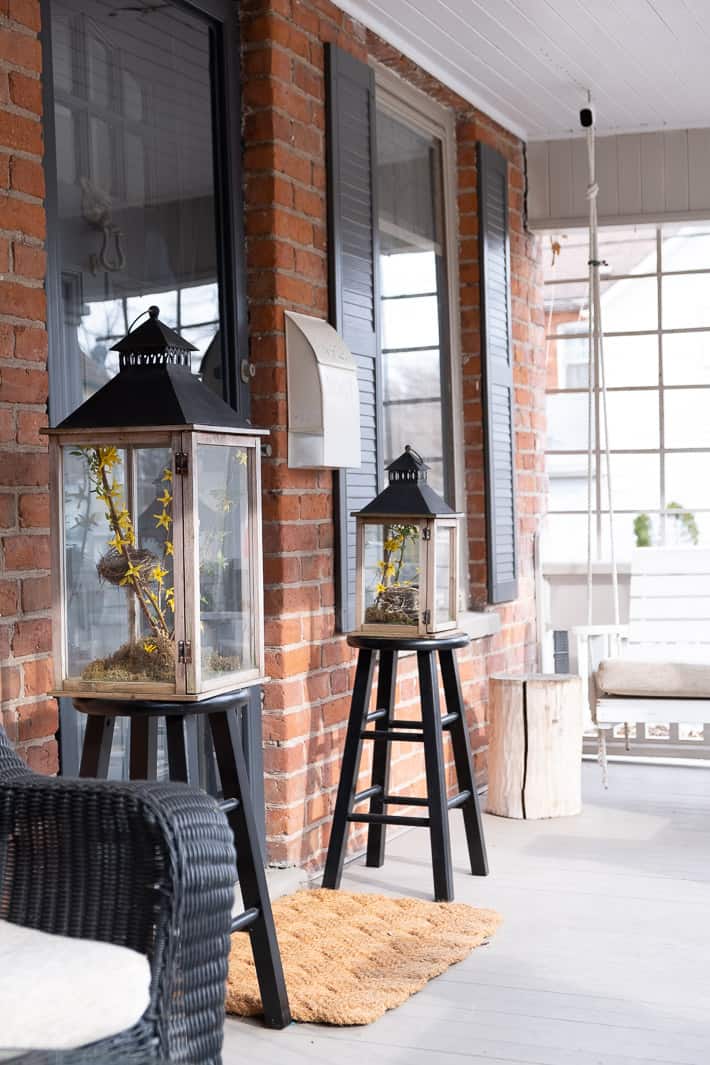 If you happen to have a birds nest either stick it on the floor of the lantern ...

... or if it's light enough, rest it in the Forsythia branches. 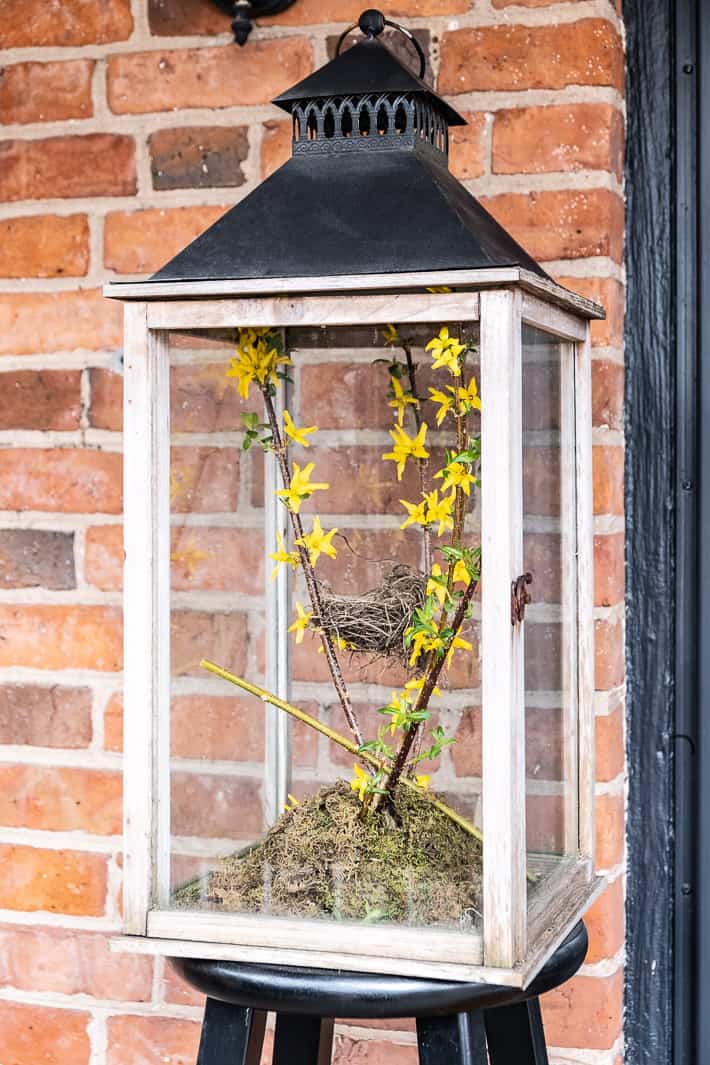 I've put these outside but obviously they can go inside too.  It never ceases to amaze me that I have to tell you these things.  Honestly. 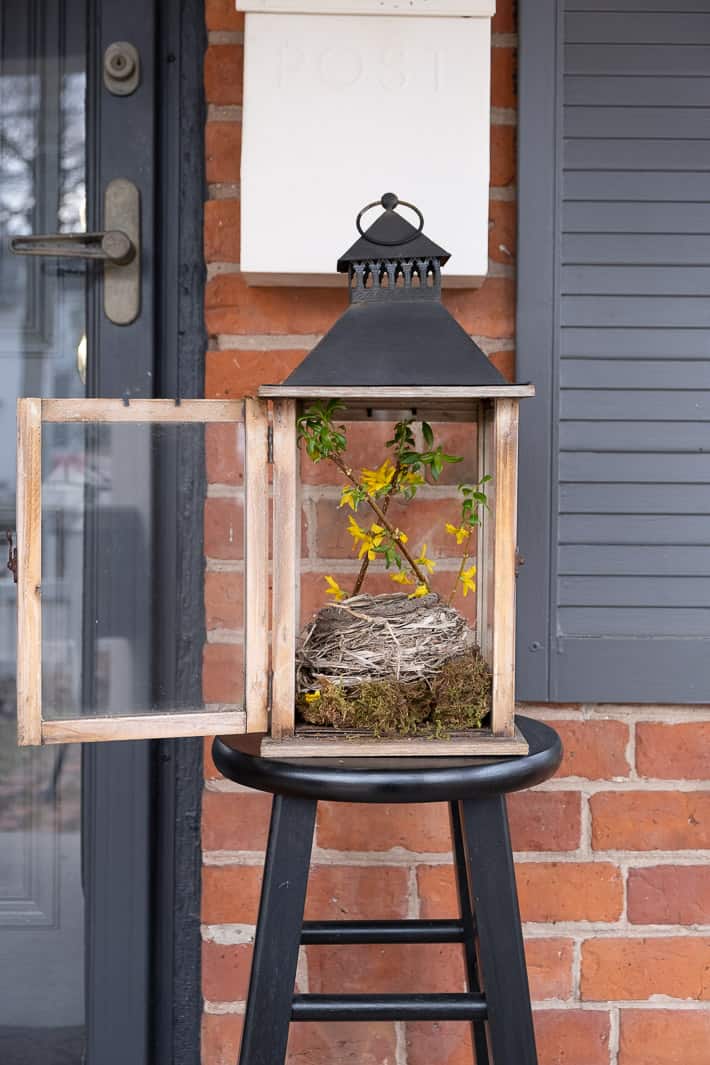 I know. You're upset because you don't have a birds nest.  Don't be. I honestly couldn't decide on whether I wanted them in there or not. I want back and forth. They look just as good without them. 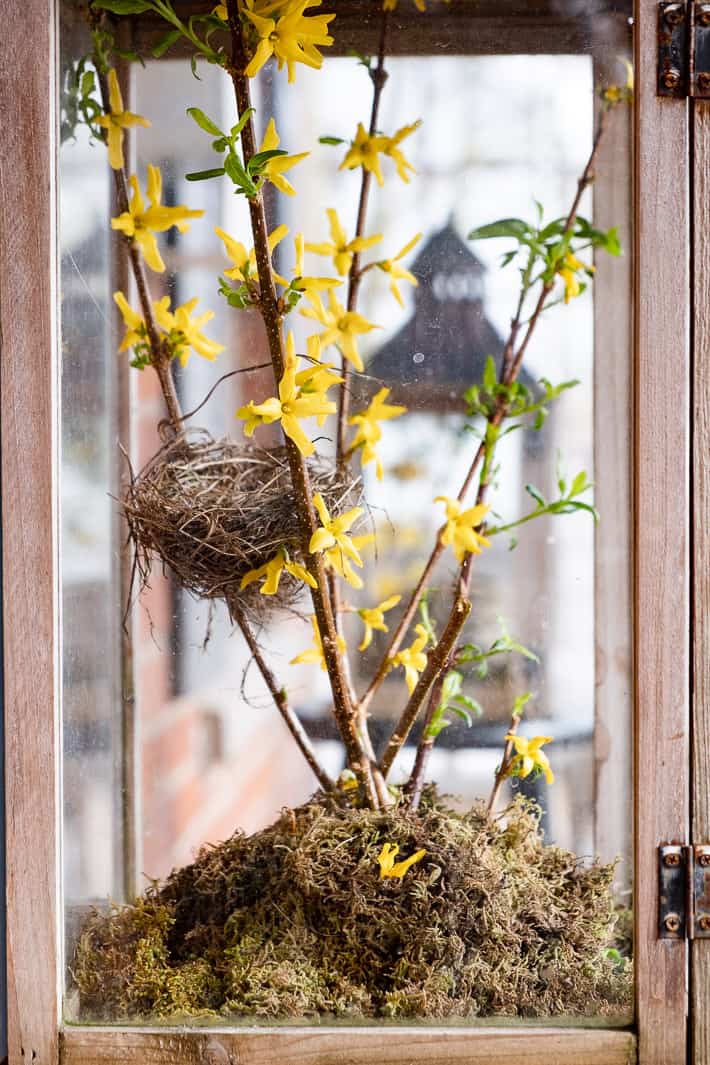 Don't be alarmed by the fact that you have to really cut down the branches (you can TOTALLY use any flowering branches, Forsythia just seem to be the easiest to get around here).  Just hack off the stems and don't worry about it.  I know.  People revere long stems and branches. We act like cutting them is similar to cutting an arm off a monkey. It isn't.  Just cut them. 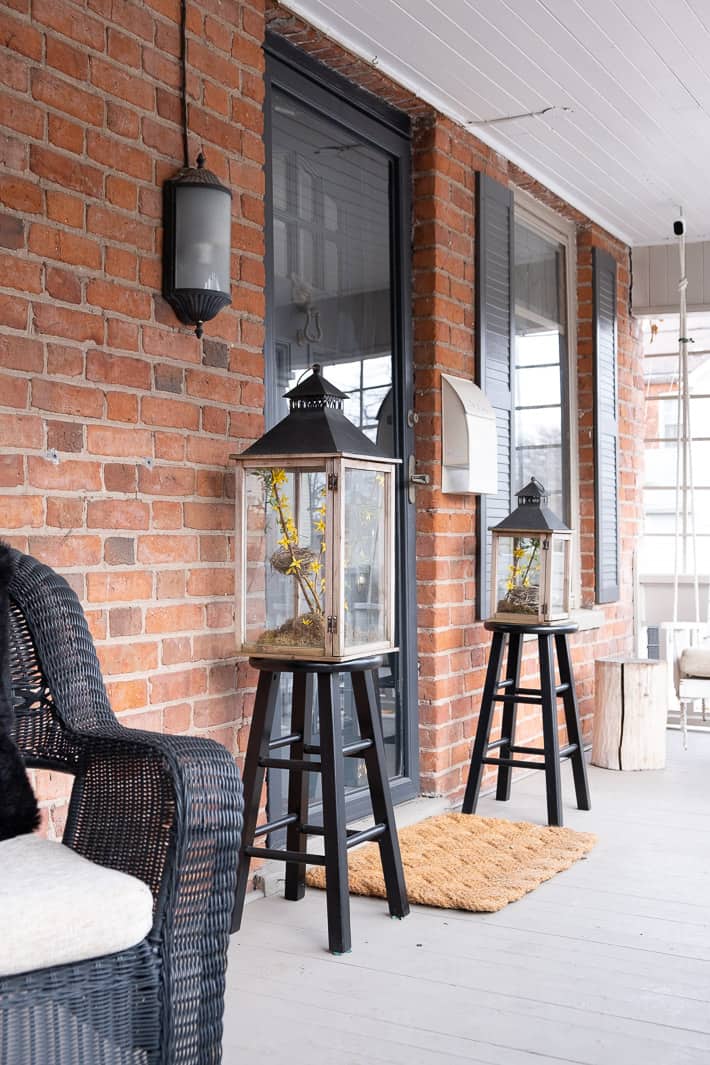 It's still pretty dreary outside, and if history is any indication we'll get one more dumping of snow this year, but that's O.K., I'll be snug inside with my delicious nutritious plate of air.