Home » Tips » Health & Beauty » A Look into Marathoning.With Quotes from the Fella

A Look into Marathoning.
With Quotes from the Fella 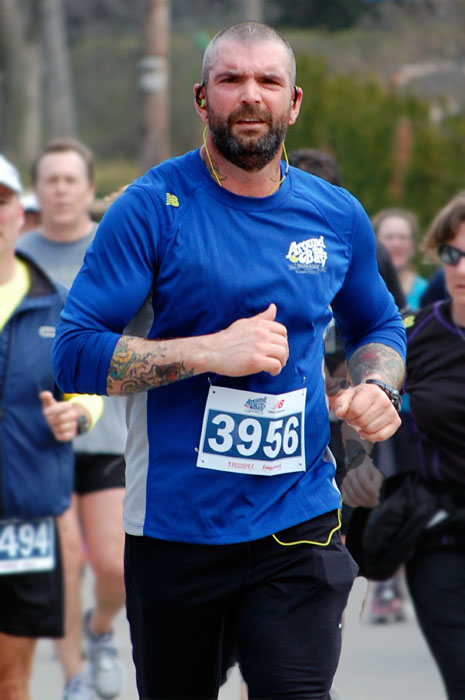 There are very few things in life that are  more emotionally draining or physically taxing than attending a marathon.  And by attending I mean watching one.   As the supporter of a spouse who performs various strenuous activites for fun, I can tell you first hand, it’s a struggle.

Between the weight lifting and the Crossfit competitions and the running races I’m a mess.   I almost regularly need to lotion my hands to prevent clapping chafing and one time I got a tiny bit of a sore throat from saying “Good job” three times from the couch as the fella attempted a handstand pushup in the front hall.  His hip also kind of blocked my view of the television so really the difficulties are endless.

For alllll the partners out there who run and jump and throw, perhaps it would do you some good to consider the effect your activities have on your girlfriend/boyfriend/husband or wife.  I mean really.  You can all be so selfish.

Think being an athlete is hard?  Try being the athletic support.

It’s all fine and dandy, and well and good.  While you better yourself and get into tip top condition, we are left falling apart at the seams.  The washing of the socks alone is exhausting.  And then there’s the injuries. I once came very, very close to tripping over a running shoe, which could easily have led to a head contusion or twisted elbow or something.  Something bad anyway.

But because I believe in bettering myself I continue to support the fella in his exercise activities.   The latest of which was a marathon.  Well, kind of a marathon.  It’s called the Around the Bay Road Race and it takes place in Hamilton, Ontario.  It’s the oldest road race in North America.  Yes.  Even  older than the Boston Marathon.  The tee shirts even say so.

It’s a 30 km run (a little over 18.5 miles) around the harbour in Hamilton.  The first 20 km. are pretty flat.  The last 10 are hills.  Mean, mean hills.  Now, I should preface this with the fella has never run a marathon in his life.  He’s very fit and quite strong, but he doesn’t have what you’d call a runner’s physique.

If these were caveman days the fella would be the guy who pushed rocks, not the guy who ran after the food.  But he did it.  And it was exhausting.  For me.

I had to wake up early, early in the morning to watch him  make a HUGE breakfast.  Then I had to eat it.  THEN, I had to walk out to the road and say good-bye as he got in his car to drive to the start line.  THEN I had to walk back in the house.  By now I needed a small nap.  As if that’s a surprise.

A few hours later I got into my car, drove all the way to my mother’s house, picked her up, then drove at least 15 minutes to where the race was and parked the car.  Thankfully I brought some water and gummy bears to keep me going.

Then we stood.  We waited.  We stood on the road like common vagrants for all to see.  It was embarrassing I tell you.  And of course, exhausting.  For around 30 minutes we stood there, getting sleepier and sleepier from all the fresh air.  So now we’re into about hour 5 of this whole “Race Day” thing and still pretty much nothing had happened. 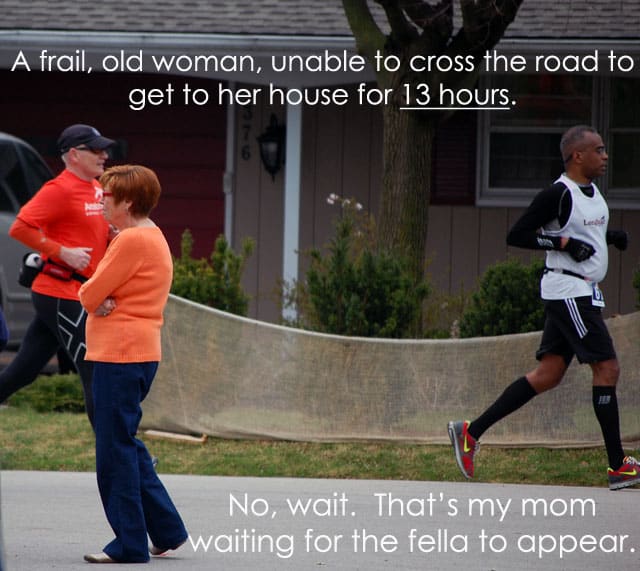 Then … out of nowhere, there he was.  The fella! Making his way down a hill.  I screamed when I saw him!  I cheered and I applauded and I yelled “I DRANK ALL YOUR WATER AND ATE ALL YOUR GUMMY BEARS!!!  SORRYYYYYYYyyyyyyyyyy!!!!!

And then he was gone.

He didn’t even stop to talk or anything.  Which, after all my sacrifices that day, I thought was kind of rude.  Actually.

For myself it was 5 months of  cheering, encouraging, washing tee shirts, cooking protein, clapping from the couch.  For race day it was 5 hours of driving, waiting, parking, and napping for this … below is a photo account, in real time,  of what I saw of the fella in the  run.  For him the race lasted 3 hours 25 minutes.  For me … it lasted approximately 4 seconds.

After this my mom and I packed back into the car and headed to a hot dog stand.  Then it was off to the finish line where as you can imagine it was craziness.  As the fella said, the smell of 11,000 runners smashed into a stadium is not one you will soon forget.  By the time we got to the end of the race I was actually starting to feel pretty refreshed.  I had a hotdog into me, a few gummy bears and other than a small blister from walking up the stairs to look down into the stadium, I was good.  I sustained a pretty gruesome hangnail from picking at my fingers while waiting for the fella to come in, but other than that I was pretty unscathed after this marathon.  It’s a miracle really.

So.  That’s my account of taking part in a marathon.  Now a few quick quotes from the fella.

And the struggles, trials and tribulations of an athletic supporter continues. 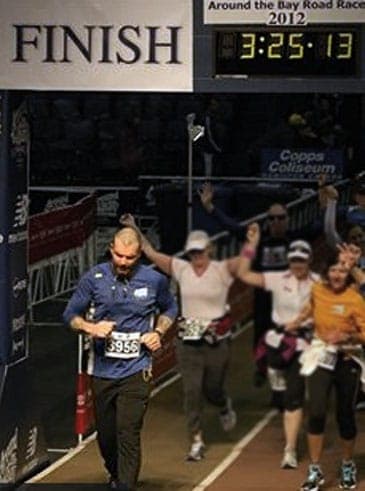 (And if you happen to see an ad for the “Tough Mudder” competition either at the top or bottom of this post, … yeah … he’s doing that one too.)