Home » My Life » My Family » A message from Aunt Jean

A message from Aunt Jean

Anyone who tells you gardening isn’t exercise is an idiot.  A real one.  The kind that mumbles and drags their hairy knuckles on the ground while searching for poop to eat.

Because last week I spent 5 hours cleaning up my 20′ x 40′ community garden and  I was more exhausted and sore after that than I was after moving and stacking 2 bush cords of wood for 12 hours.

In fact as I type this, the day after cleaning up the garden, it’s noon and I’m still wearing my pajamas.  Just  one room over from my office is the bedrom  where the two cats are sunk into the duver like liquid fur.

The day I stacked the wood I had a lot of people stopping by to ask if I needed help and one of those people was The Famous, 100 year old, Aunt Jean.

She wasn’t actually coming to see if I needed help but when my mother drove up with her in the passenger seat I tried to physically yank her out of the car to put her to work.  No go.  She wouldn’t budge.  She’s strong for 100 years old.  Even more surprisingly I couldn’t trick her into it.  You’d think by 100 a person would be really easy to trick.  Not this one.

My mother had just brought her over to have a look at what was going on in the world outside of the her retirement residence.  NOT nursing home.  Retirement home.  I showed her Mabel, who was named after Aunt Jean’s mother.

Aunt Jean and I talked a bit about politics and entertainment.  I told her how many fans she had on my website.

I asked Aunt Jean, “Do you have anything you want to say to your fans?”

Without missing a beat or thinking about it she had a message for you, her fans. It’s an insight and proclamation that I think will strike a chord with all of you. Aunt Jean has seen many changes in our world in her 100 years on this planet. She has seen 100 years worth of wars, death, births and inventions. So if she has a message for you, you can bet it will be impactful.

Here is her message. 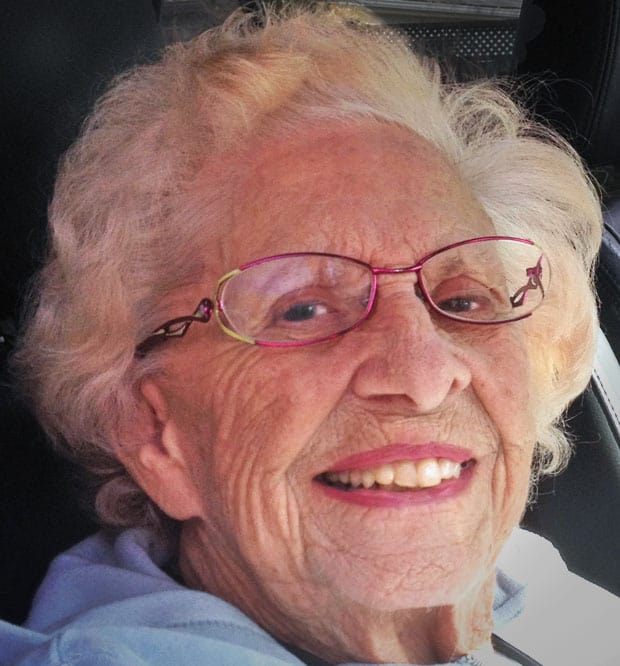 “I have all my own teeth”