Home » Everything Else » A No Fail $10 Birthday Present

A No Fail $10 Birthday Present

Speeding through the streets I had one thing on my mind.  A solitary thought so strong it rendered the flashing billboards and screaming drunks invisible to me.

I’d been driving for about a half an hour before I realized I was driving aimlessly.  Turning left, turning right with such intensity and purpose anyone following me would surely have thought this is a woman on a mission.  This is a woman who knows where she’s going.

But I didn’t.  I was driving in circles in the most dreaded place on earth.

My nephew’s 4th birthday was coming up (in about an hour) and I needed to get him a present.

I may  not have kids but I do know a thing or two about them.  They LOVE getting toys.  They just don’t love playing with them.

Anything else though?  For the most part kids play with toys once (usually the day they open them) and then the parents have to figure out a place to store those toys for the next 5 years or so while their kids ignore them and instead play with potatoes, cardboard boxes and dead bugs they find on the windowsill.

And then divine inspiration hit me right there in the toy store parking lot.  I turned the car around, and headed straight to the Bulk Barn.

And this … is what I gave my nephew for his 4th birthday. 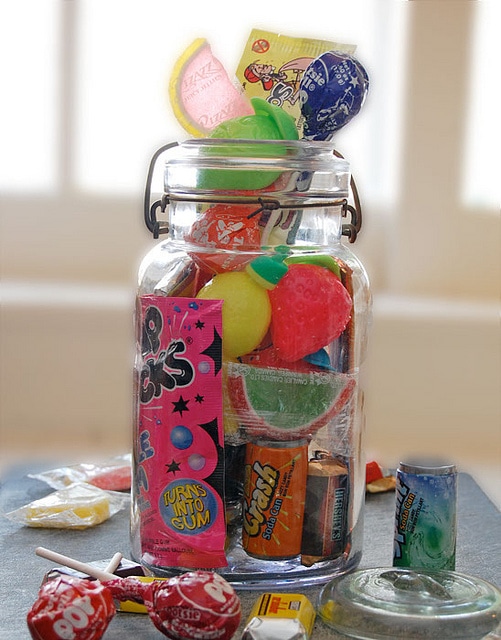 You’ve never seen such a look of surprise, astonishment and excitement.  And that was just from his mother.  The kid nearly peed himself.

So if you ever find you’re in a rush for the “perfect birthday present” for the party that you were told about months ago but only remembered an hour before the party actually began … give this big ole jar of candy some thought.

I filled it with fun stuff like Pop Rocks, tongue tattoos, Garbage Candy and other things like miniature chocolate bars, jelly candies, gum and a bunch of other sugar filled stuff.

It’s a birthday for God’s sake.  Live a little.

If the kid’s a bit older you can do the same thing, but stuff some money in with the candy.  It looks beautiful, is fun to give and will most certainly be the hit of the party.  Cater it to whatever age the person is you’re giving it to.  I know one of my sisters would love to get this filled with her favourite candy from when she was a kid.  Malt balls come to mind.  Bleh.

No need to drive around the dreaded toy store parking lot.

Grab a mason jar, fill it with $10 worth of candy and watch their eyes light up.

An even less expensive solution that’ll get an equally huge reaction … just grab the mason jar and fill it with dead bugs.