A Starry Night.
The Christmas Cloche

Every year I do my house  a little bit differently for Christmas.

That’s not the plan of course. The plan is always to do it exactly the way it was the year before because that would be the fastest and easiest thing to do.  Plus every year when I do the house I think, Yup.  THAT’S IT!  THAT is the way I should decorate for Christmas EVERY year.

Then I decide to move stuff, or add things or decide that I no longer need a near life sized Santa Claus that tromps up and down a ladder while carrying lights and toys all to the sound of really bad Christmas carols.

Just moving an end table during the year can cause mayhem at Christmas.  WHERE AM I SUPPOSED TO PUT THE BOWL WITH BALLS NOW??!

The year I replaced all of my furniture and redid my whole house I had no idea where to put anything. Nothing was the same. Christmas was a real shitshow that year.

This year I’ve gone a little bit simpler for a couple of reasons. I’m in a mess because of the kitchen and dragging tons of Christmas decorations out just makes it feel like more of a mess. And I’m tired. I’m just plain tired. And I figure if I’m tired now, chances are I’ll be tired when it comes time to have to put away the mountain of Christmas decorations in January.

So really, my pared down Christmas isn’t about me being lazy right now.  It’s about KNOWING I’m going to be lazy in January.  I’m being proactive and problem solving.  I’m kind of great.

I’m still decorating for Christmas, it’s just a little more restful looking. As opposed to most years when it looks like hungover Santa barfed Christmas into my house.

When I saw this on the cover of the Restoration Hardware catalogue I knew I had to do it. I already had the cloche … all I needed was the set of lights.

My first plan was to order them online but with shipping and duty it was going to be too much money. So then I planned to head to my nearest outlet mall with a Restoration Hardware in it.  They were sold out.

Back to my first plan of ordering them online.  Nope.  Still too much money.

So I searched around and found similar lights on Amazon for a lot cheaper.  $16 for 20 feet, as opposed to $40 for 20 feet from Restoration Hardware.

Both sets are plug in lights.  I have a very short string of these lights one of my sisters gave me years ago that work off of batteries.  I prefer the plug in, because nobody can hide an extension cord like I can, and you never have to worry about batteries running out. 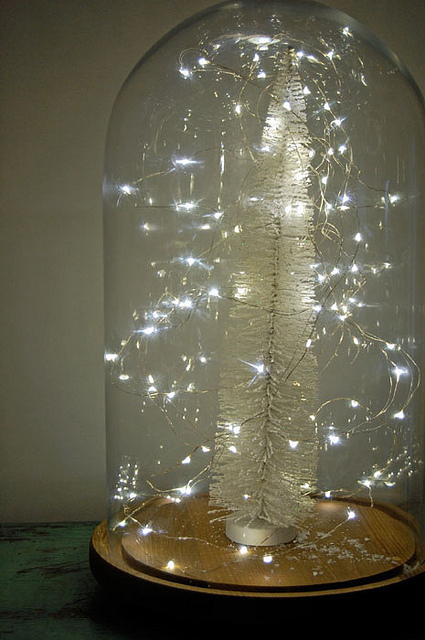 I love them they look great but … 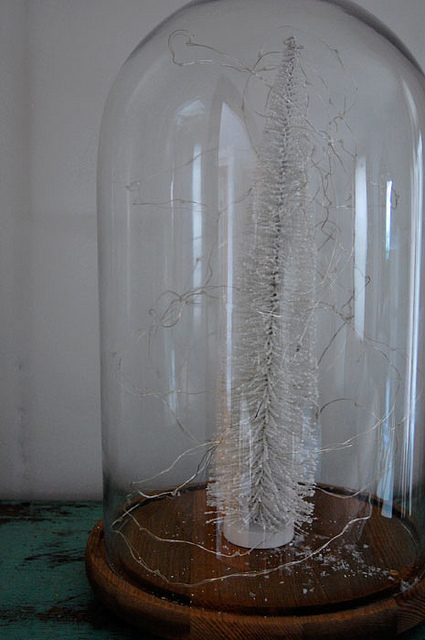 … they are hilariously bright. 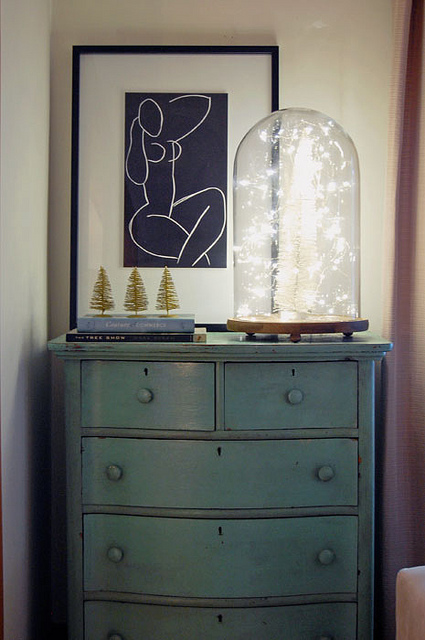 I actually laughed out loud when I first plugged them in.  I was counting on them to be subtle. They are not subtle.  They could be used in a number of emergency situations including but not limited to landing planes. 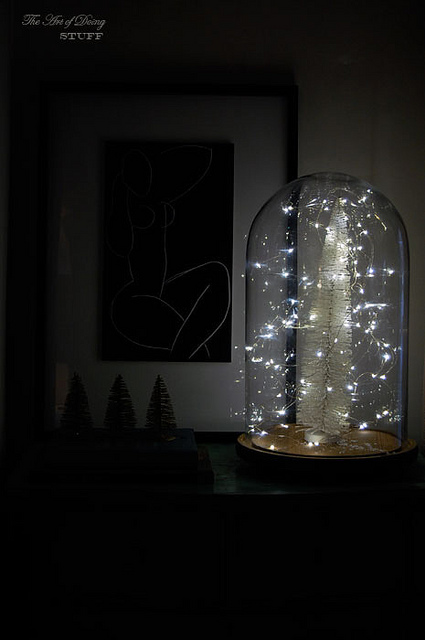 Once I got used to their brightness I loved them.  They’re beautiful, which doesn’t quite come across in the photos.  It’s remarkably hard to capture the beauty of a fake tree standing in a fake starry night.

I can rest a little bit now, knowing no matter what,  my season will be merry and bright.