Home » My Life » Me » Answers to your random questions.Including the story behind the falling pajama pic!

Answers to your random questions.
Including the story behind the falling pajama pic!

Question: What kind of camera do you use?

Answer: I use an old Nikon D40 with the standard lens that came with it and occasionally a macro lens.  Sometimes my iPhone if I’m feeling lazy or rushed.

Question: How do you do everything you do?

Answer: I don’t have kids or a very regular bathing regiment.

Question: How do you stay in shape?

Answer:  I run sporadically and do things like build chicken coops.  And chase chickens.  And clean up chicken poop. And cat poop.  Oh.  Plus I work out 7 hours a day.  If you count sitting at a computer working out.

Question:  Can you really make a living blogging?

Answer:  Yes and no.  Can you start up a blog and because a big overnight success?  Probably not.  Can you start a blog and work on it part time and make a living?  Probably not.  But if you approach your blog as a business it is possible to make blogging your career.  You need to be an exceptional writer and/or photographer and have ideas that are unique to anyone else’s.  If your ideas aren’t all that unique you’d better be an exceptionally exceptional writer and/or photographer.

Question:   Are chickens a lot of work.

Answer:   Not really.  But going on vacation can be a pain because you need a chicken sitter.  Which isn’t as easy to find as say, a baby or a dog sitter.  Actually babies are pretty easy to find.  Just look behind you the next time you’re on a plane.

Question:  Do you ever relax?

Answer:  I try very, very hard to relax, but I find it awfully stressful.  I make sure to slow down and watch an hour of television a day, usually late at night and often with the computer on my lap.  I read every, single night before bed and have done so since I could read.  That is the only time you will probably genuinely relaxing and not doing a single other thing.  I’m truly trying to remedy that though.   It’s very difficult for me to turn my mind off. I also find cooking and gardening to be relaxing.

Question:  What really happened in that picture where you’re falling down the stairs in your pajamas?

Answer:  Well, it’s a funny story actually. To me anyway.  Not so much to my niece’s husband.  Her husband, we’ll call him Garry, (because it rhymes with his real name, Barry) was at a business meeting on the other side of the country.  The business meeting was taking place over lunch.  On his way either to or from his chair (I can’t remember) he wiped out on nothing.  Literally just did a Whoop!  Whoop! and fell flat on the ground.  He tried to break his fall with a single finger.  I guess he thought that finger was especially strong or something.  That finger broke as you might imagine, but he went back to his business meeting like nothing had happened, even though clearly it did and everyone saw.  I should mention that Garry/Barry often finds himself in Whoop!  Whoop!  situations.  According to my niece, his loving wife, he’s a bit of a klutz and often has unfortunate things happen to him.

So when Garry/Barry texted his loving wife and told him he fell in a meeting and thought he may  have broken his finger she, in her loving wife way, burst out laughing.

She continued to laugh for the majority of the next 2 days. 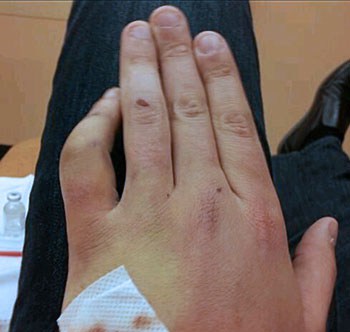 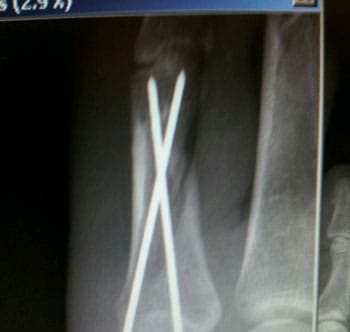 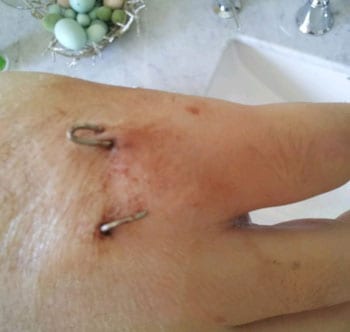 SO!  The picture.  I took the picture one night as a bit of a reenactment and sent it to my niece and Garry/Barry with the caption.  “HEY! Look!  I’m Barry! I’m in a business meeting!” 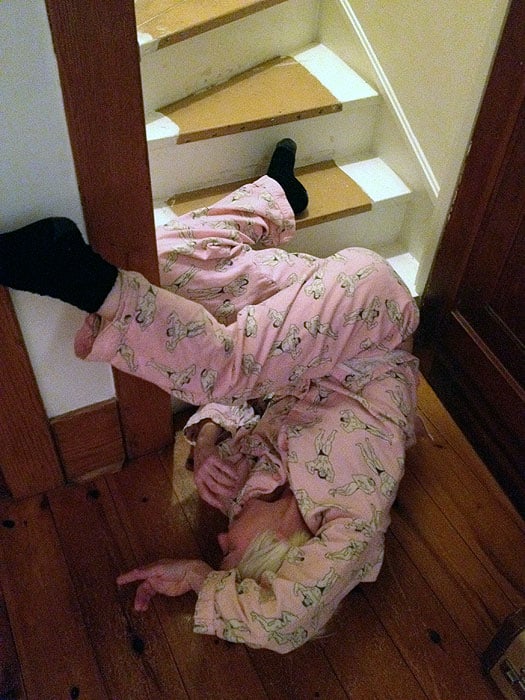 And that is all I have for you today.

Have a good weekend!  And don’t fall down.  If you MUST fall down, don’t tell anyone who might write about it in a blog.