I told you Monday about all the new things I got over the holidays but I totally forgot about the most spectacular. 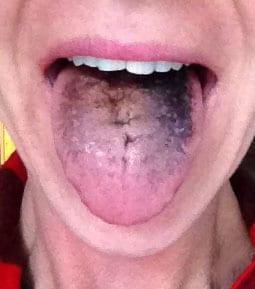 You were expecting a photo of Idris Elba weren’t you?

Let me tell you exactly how this came about.

The holiday season begins around the time of Thanksgiving for most people.  Even in Canada where Thanksgiving is a month before the American holiday.  Once it’s over, shortbread cookies and expensive cheeses and great big boxes of Poppycock start appearing in grocery stores.  All the delicious things that only appear during the holiday season.  Even the things that are there all year round that I would never think of buying seem tempting: pigs in a blanket, frozen spring rolls, toilet paper.  Just kidding.  I buy frozen spring rolls all the time.

I love it all and happily throw it into my grocery cart from October to the end of December.  I try very, very hard not to eat these things.  Just being able to look at them in my fridge is almost satisfying enough. Only it isn’t and I scarf everything down until it’s gone and I don’t feel well.

And I do this Every. Single. Day.  Some days are worse than others and I really do have a pretty good grip on it until the middle of December when I can’t hold off anymore and throw shortbread cookies into my mouth one after the other, my arms swinging around like windmills.  I’m actually too embarrassed to tell you about the bacon wrap episode.

Back to the black tongue.  One night before bed after filling my belly with enough nitrates to preserve a full sized marching band I realized I wasn’t feeling tip top.  You know?  I was a bit woozy in fact.  So I pulled on my ugliest flannel pajamas, a warm pair of socks and padded my way down to the medicine cabinet.  I found some Pepto Bismol chewable tablets that I had bought for our trip to Thailand.  I brushed my teeth, fluffed up my hair a bit in case tonight was the night Edris Elba decided to take me up on my offer, then  made my way to bed.  Just before I fell asleep, clutching my stomach and cursing cured meats, I remembered the Pepto Bismol tablets I’d put in my pocket.  So I chewed them up and went to sleep.

In the morning I was feeling much better and couldn’t think of a single reason not to eat an armful of bacon wraps for breakfast, so that was my plan.  I would do that just as soon as I brushed my teeth.  It was in that early morning foggy stage that I looked down into the sink and saw black.  All my spit was black.  Really black.  I’m dying black.

So that was it.  That was how I found out I was dying from the inside out by eating too much crap over the holidays.  I was sad of course but knew it was my fault.  I wasn’t sure what to do next.  Do I call my mother and tell her?  My doctor?  I know. I should write a note to the Canadian Pork Council condemning them for making bacon so tasty.

Or maybe I should Google it.  So I did.  As it turns out Pepto Bismol has some weirdo ingredient in it that when mixed with saliva and left to fester will turn black.  BLACK.  The night before, I had chewed up my tablets then went straight to sleep. The residue from the tablets stuck to my tongue, interacted with my saliva and blammo, I had all the symptoms of someone who lived a life hard and was paying the price.

This was just like the time I ate beets and thought I was dying, and remarkably similar to the time I was sure I was double jointed only to discover I was very, very wrong trying to prove it.

So I wasn’t dying I just had a chemical reaction brought on by overindulging in a favourite holiday treat. Pepto Bismol.

Hey!  Wanna know how this story ends?  With me.   Heating up.  Some bacon wraps.