Home » My Life » Random Stuff » Behind the Scenes of a Post

Working from home has its advantages and disadvantages.

If I so choose, at any given moment, I can do the chicken dance backwards from my front door all the way into my kitchen while wearing a squirrel on my head.  In an actual office that might be frowned upon.  Mainly because everyone would want to join in, and then where would productivity be?

It’s hard to explain to explain to people how much time it takes to create a single blog post (and I plan to do a post on exactly that later), but to give you a very small idea of the sorts of things that can happen, and the barriers we have to overcome I thought I’d give you a little behind the scenes look from one of last week’s posts.

How to Braid Onions (or garlic).

How to braid onions or garlic is pretty easy.  If you can braid you can do it.  It only took me about 2 minutes to braid my batch of onions.  But to write a post so that you could understand how to do it?  That took a bit longer.

You can have a quick look at the post here to refresh your memory.

The first thing I had to do was find a spot outside that had shade so I could take some photos for the tutorial.  Full sun is bad.  BAD BAD BAD.  It’s ugly.  My front porch seemed to be the best place to shoot, so the creation of my post began with moving all the porch furniture away so I had room to work.

Taking photos is never comfortable.  I’m usually standing on a chair, trying to get a shot while balancing a big sheet of styrofoam for bouncing additional lighting onto whatever I’m taking a picture of or scrunched down like a ball on the ground with bits of dirt stuck to my cheek for most of the day.  Today it was scrunching.

Once all my shots were done it was into the house to upload all the pictures to my computer.  Once they were uploaded I then had to go through them all to pick out the best shots.  Once the best shots were picked out,  I had to move them into Photoshop where each pictures had to be edited.

Some pictures are pretty good exactly as they came out of your camera, but a lot of times a little fiddling goes a long way to making them better.  Enhancing the colours, or desaturating them, brightening this or that … all has to be done to every photo.  With the How to Braid Onions post I had 12 photos to edit, which is fairly typical.

After the regular editing in Photoshop, I went back in and added text to all of the pictures to help make the step by step tutorial easier for you to understand.  Normally photo editing can take anywhere from a few minutes to a few hours, but usually it’s somewhere in between. 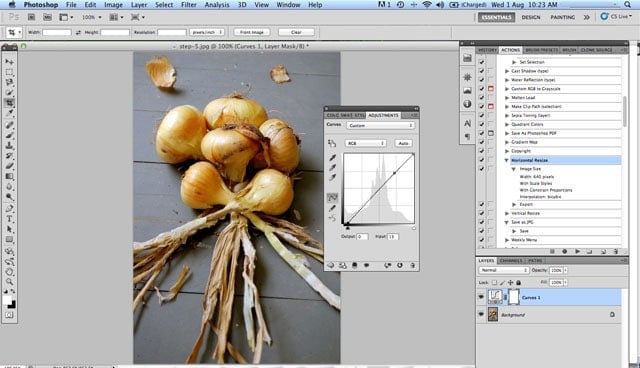 Then there’s the business of video.  I figured if pictures are good, video is an even better teaching too.  When I shoot videos I either use a couple of Flip cameras running at the same time from different angles but more and more I’ve been using  my iPhone for video.  I prefer the sound quality from the Flips, but the iPhone has great quality and has the ability to focus on any given point in the scene, where the Flip does not.
So after I shot all my pictures I thought … I might as well make a video.  Kind of an afterthought.  Well, how exactly to shoot this video?  I wanted you to be able to see the braiding from my perspective  (which if you were braiding would be your perspective).  I didn’t want the angle from the side, or with me facing the camera … I wanted you to see the braid exactly as I was seeing the braid.  But I couldn’t put the camera behind me because … my ass would block the shot.  Admittedly it’s a relatively  small ass, but it’s still a pretty good camera blocker.
I toyed with the idea of attaching it to my head, but my head was going to move around too much making most viewers feel queasy.  Like when you watched The Blair Witch Project.  Or any 3D movie from anything other than the back row.
This was turning into a thing.  But I tried not to swear, give anyone the finger or cry.  I conducted myself like a lady.  Who sometimes does the chicken dance backwards.
My shot, I decided, needed to be an overhead shot.  In television we’d use what’s called  a Jib for this.   A big, huge, crane like apparatus that the camera is mounted on.
I didn’t have a jib handy on this particular day.  But I did have string and twine.
So I ended up making an iPhone sling. 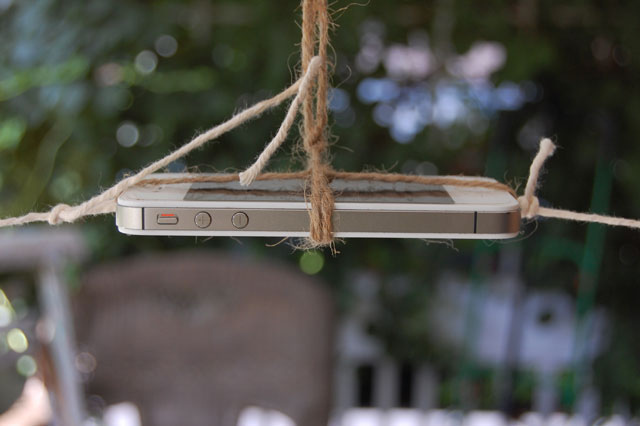 To suspend it, I screwed a cup screw into the ceiling of my porch.  But it was swingy. 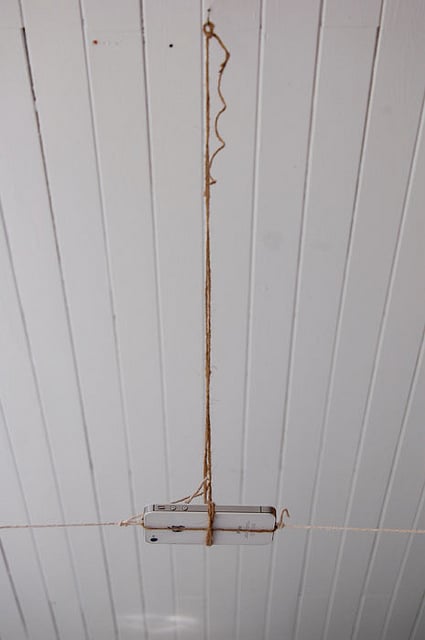 So I had to stabilize the camera by running lengths of string to a planter and my front porch light. 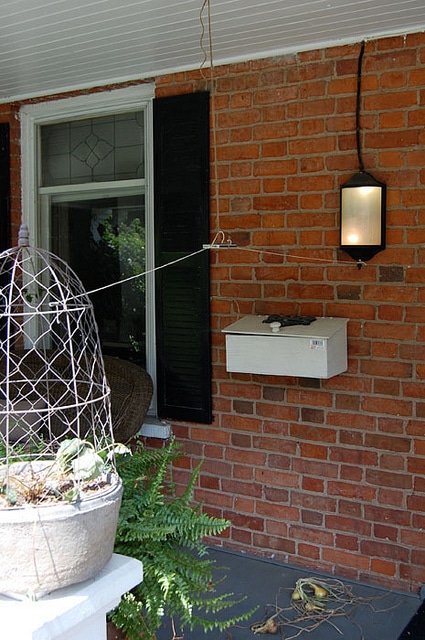 Bingo.  It was just enough to keep the camera stable.  Then after all my hard work I went inside for a snack.  Olives. 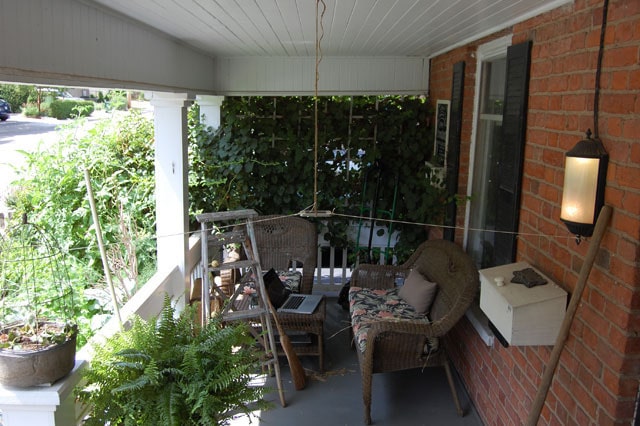 Back outside I brought my pictures up on my computer so I could refer to how my photos looked originally and how my onions were laid out so there would be continuity between the photos and the video.

Then I got down to business, pressed record and shot the video in one take. 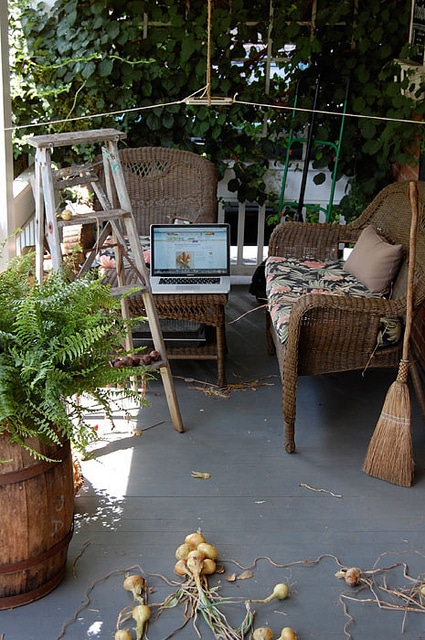 Once the photos and video were done, the front porch was a tiny bit of a wreck that needed to be cleaned up.  I should include more shots of the disaster of my house on any given day while doing posts.  It’s quite a sight. 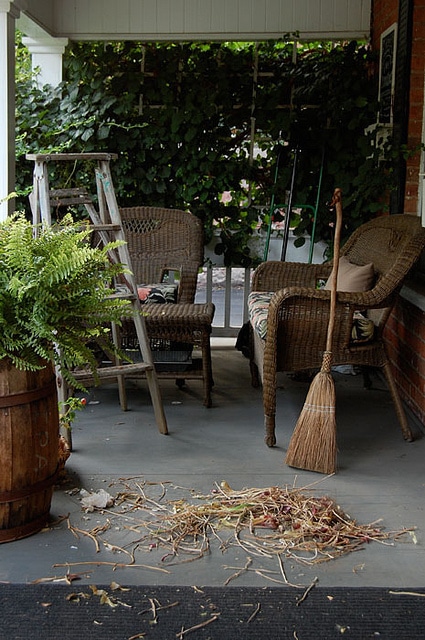 Then comes the business of editing the video which can take an long time.  A really long time.  On average it takes several hours to create just 2 minutes of video, whether you’re talking about a blog, a movie or a tv show.  So yeah … there was that to do. 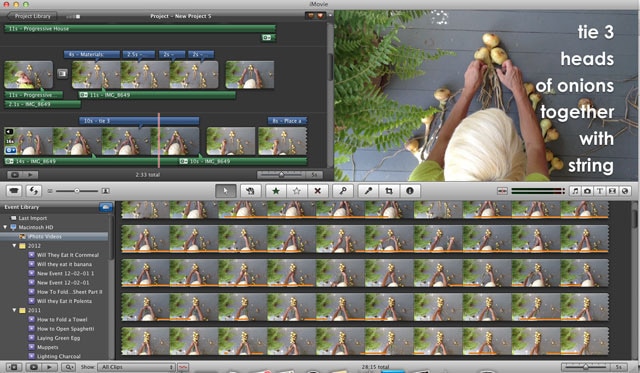 Once all of this is done I felt pretty good about myself and what I accomplished.  High fives for me.

Then I realized I still had to write the post.

And that, is what goes into creating a post.  Many hours, many screw ups, many solutions.  All done with with poise, elegance and a squirrel on my head.