I understand that *most* people don't want to set fruit fly traps up around their house and then count every single fruit fly to see which one is the best. But I do. 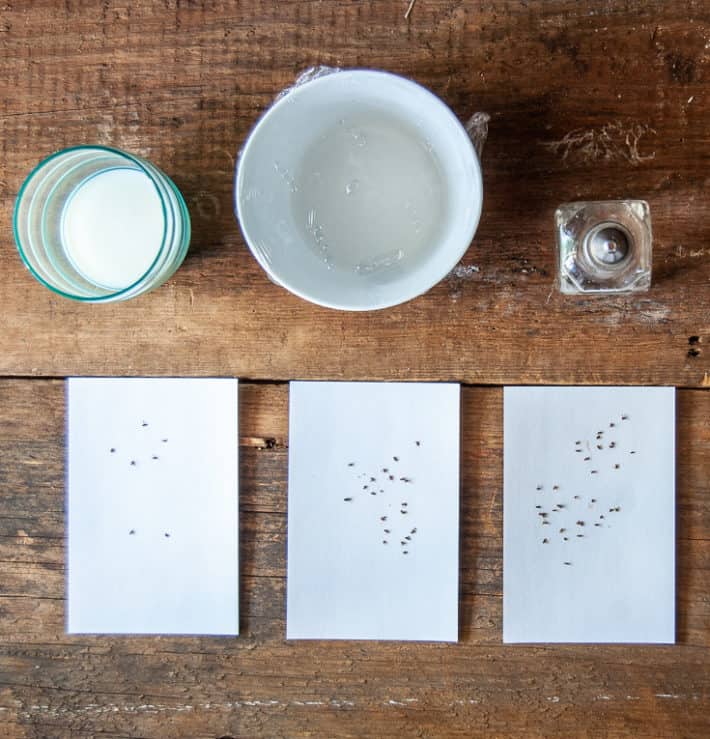 Whatever happened to the olden days when we used to just throw our garbage out the car window and it would magically disappear because we couldn't see it anymore? 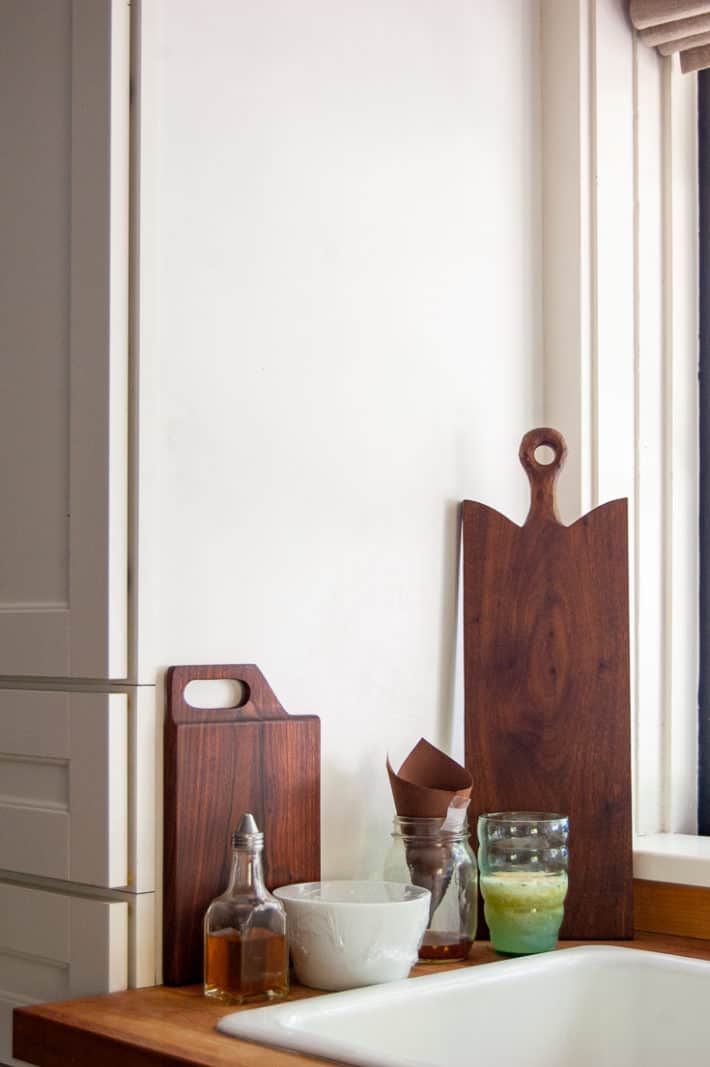 That means my compostables (fruits and vegetables) go under the sink for a week.  When I pull the compost bin from under my sink, a planet of fruit flies has been known to rise up out of it. They then disperse with military precision around my kitchen.  Their preferred assault positions are on the counter, the cupboards, and once, in my pretty, pretty hair.

I decided the best line of defence would be to dance around the kitchen flinging a tea towel at everything that moved but that didn't work because the fruit flies were like fighter jets and my tea towel was like a  sloth on Prozac.

The time they got in my hair I became particularly disgruntled and immediately set out a bowl with vinegar in it and stretched plastic wrap over the top.  Punched a few holes in it with a fork and I was done.  That's the solution to fruit flies for a lot of people.

All of the stress from the fruit fly infestation required I have a stiff drink of milk.  In the time it took to pour the milk and walk to the other end of the kitchen there was a fruit fly in it. I figured they must love milk so I set my glass of milk on the counter beside my regular fruit fly trap.  Then I remembered that whenever I have fruit flies in the summer they always get into my vinegar bottle so I set that on the counter too.  THEN I remembered about my DIY bottle fly trap from last year and made a miniature version of it with vinegar as a bait in the bottom instead of rotting shrimp.

And that is how the GREAT FRUIT FLY TRAP EXPERIMENT began.

I left the traps out for 3 days, which is how long it took to eliminate the fruit flies.

I then emptied the contents of each trap into a fine sieve, catching all the dead fruit flies, dried them on a piece of paper and started counting.

And here are the shocking results.

Pour milk in a glass and leave it on the counter. 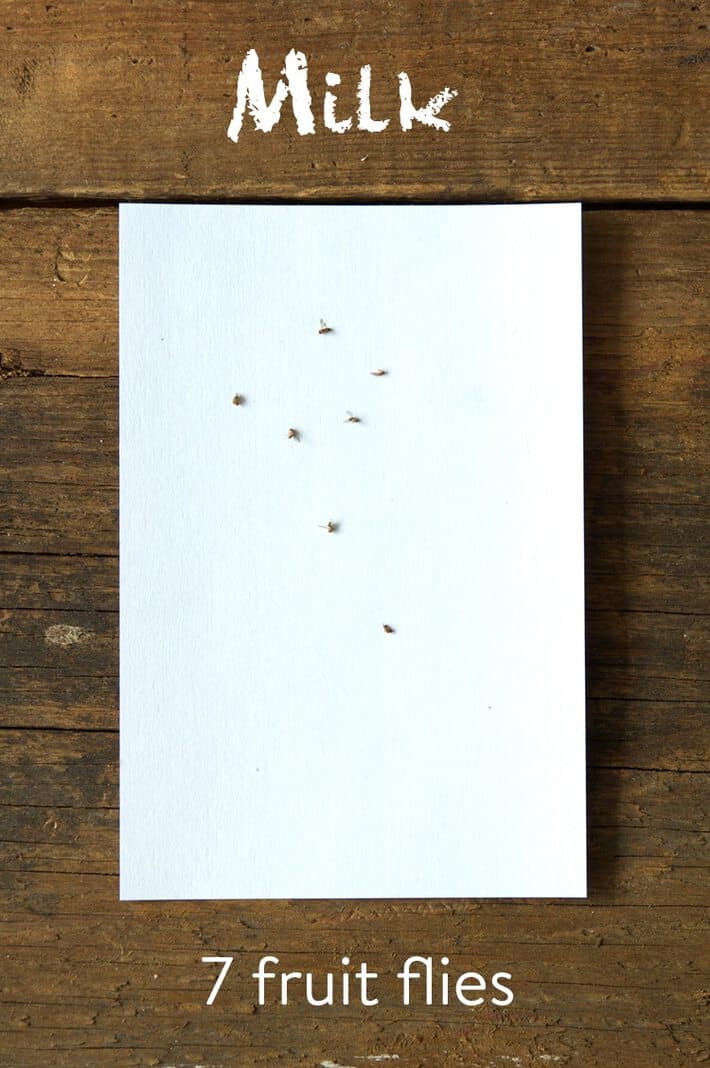 The milk probably would have caught a lot more fruit flies if it hadn't turned to yogourt overnight creating a solid surface that the flies could just walk on.  It was not an easy nor a fun job to sift out the fruit flies from coagulated, curdled milk.

Set a bowl of vinegar out and stretch plastic wrap across the top tightly.  Punch holes in the plastic wrap with a fork or toothpick. 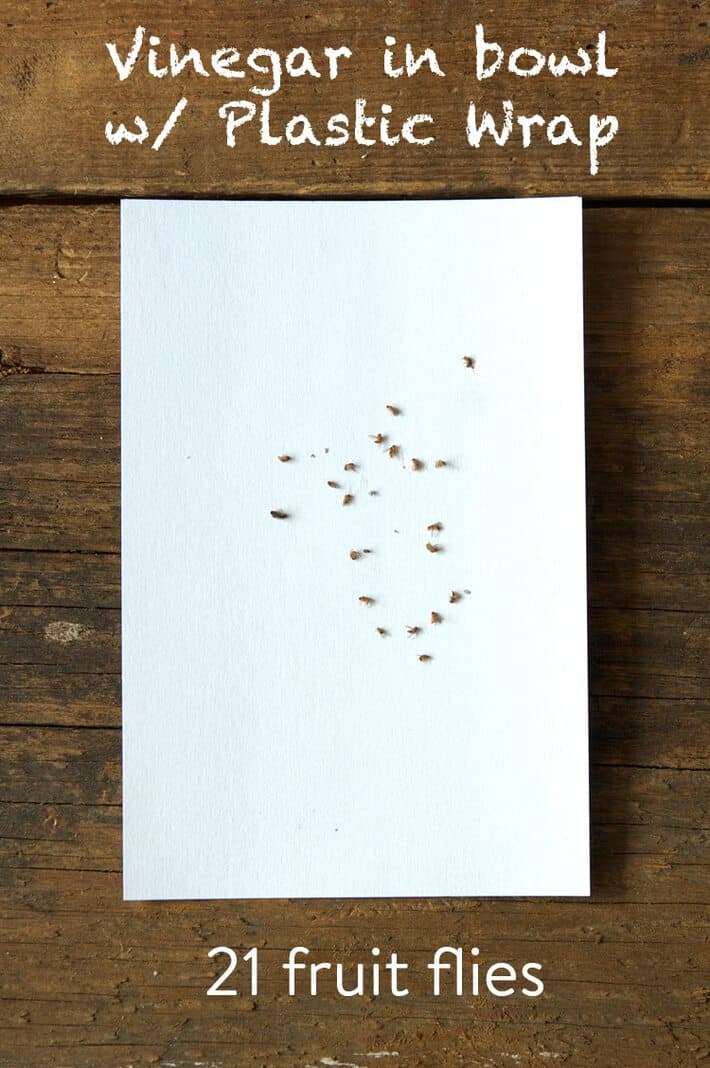 I think most of you probably know this method. It was always my go-to for fruit flies.  It came in second to last in my fruit fly trap experiment.

Leave your vinegar bottle out on the counter. Don't plan on using the fly filled vinegar in the near future unless you're training to go on Survivor or something. 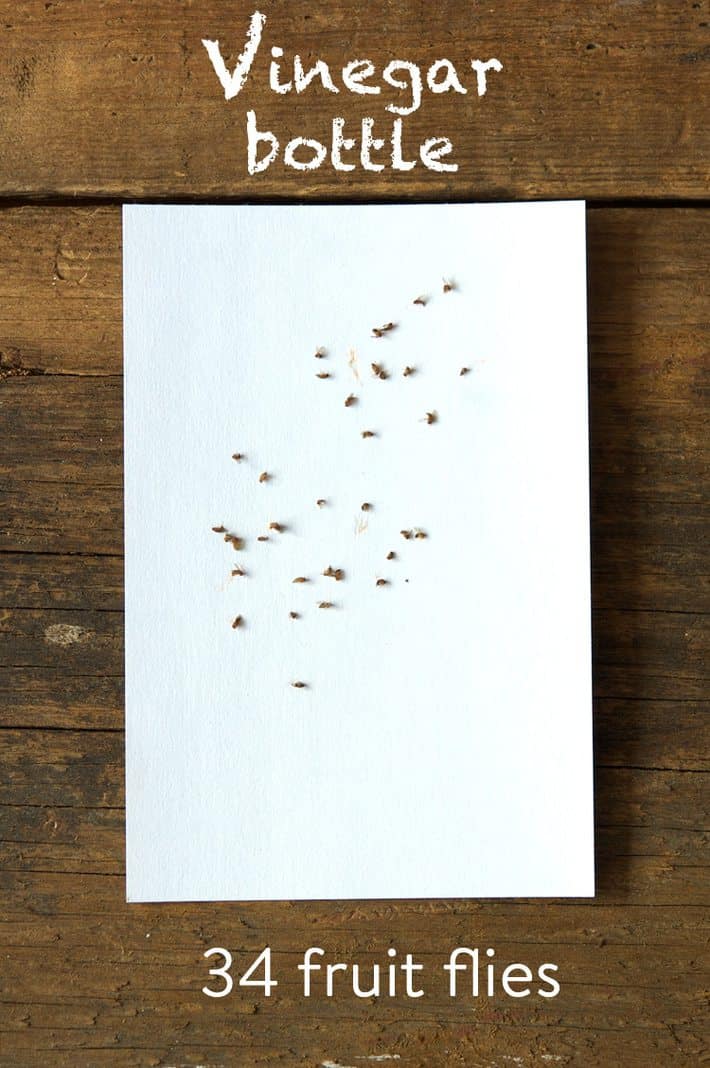 Roll a stiff piece of paper into a cone and fit it into a mason jar with vinegar in it. The cone should be quite close to the surface of the vinegar. 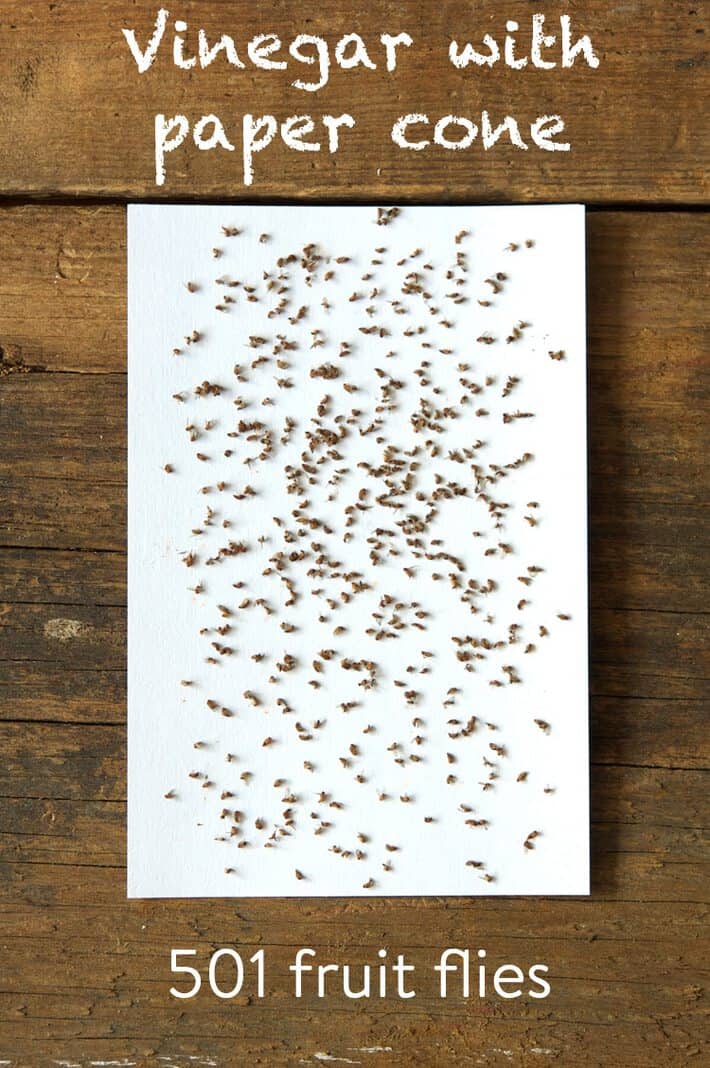 Yes.  I know.  Close your mouth, you'll get fruit flies in it.  I had the very same reaction when I saw how many flies this method caught. Once I counted them I WAS GIDDY AND NAUSEOUS.

Using a paper cone and mason jar worked THAT much better than all other DIY fruit fly trap methods. I sifted, dried and counted them.

This DIY method for catching fruit flies blows the other methods out of the water and I suspect it would do the same to any store bought fruit fly traps. 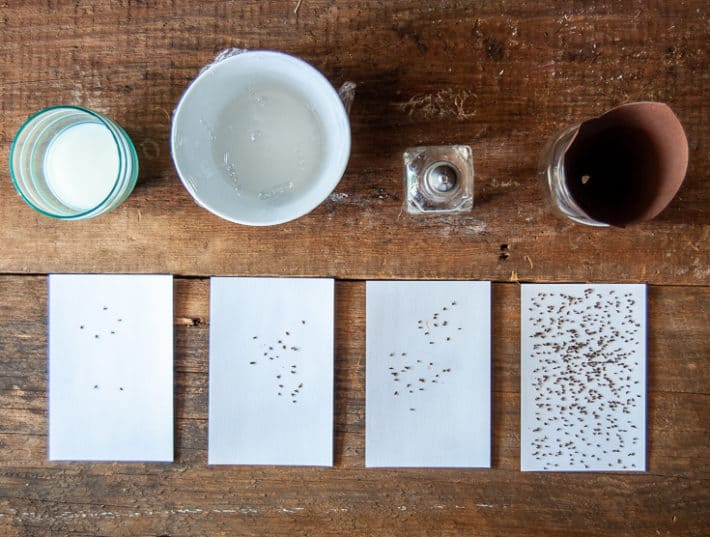 Had you told 16 year old Karen that she would make a pretty good living one day from drying and counting fruit flies she would have responded with a resounding "Yeah that sounds about right".

If you aren't sure how to do it or what it looks like  here's my full tutorial on how to make one of these traps.

Any kind of vinegar makes a good bait and as anyone who drinks knows ... so does wine. But I found they seemed to be MOST attracted to Raspberry Red Wine Vinegar. It has all the components they love. Wine, Vinegar, and the sweetness of fruit. Plus it's great in a salad dressing.

I'll be emptying my compostable garbage a little more often for the rest of the summer.

Now if you'll excuse me, I have some gathering to do, I'm guessing it's garbage night again.