So a funny thing happened on the way to the coop last night.

I had oneeee more thing to get done on the coop before I was going to allow myself to rest a little bit.  I'm that way.  I withhold things like resting, and eating and peeing until I finish doing whatever stupid, hair brained thing I happen to be doing.  It's like a reward.  Yeah.  Peeing and eating.

So basically, I reward myself with life's necessities.

As I was saying, I had one more thing to do, which was cut a teeny tiny bit of wood to be even teenier and tinier.  I had tiny, what I needed was teensy.  So I got out my handy jig saw and ...

The jigsaw kicked back and hit me in the face with full force.  At this point, I was really wishing I'd peed earlier.  O.K.  We're only a couple of sentences into this story and we've already learned 2 lessons.

1.  Don't use power tools when you're overtired.

2.  Pee whenever you have the opportunity.

The butt end of the jigsaw smashed my lower lip so hard I felt it start to swell up before I even dropped the saw.  Why did the jigsaw smash me in the face?  Because I'm stupid.  I wasn't holding the saw flush with the wood.  Basically, I was using the saw improperly.  If I had been properly rested, fed and had a newly evacuated bladder I never would have done such a thing.

I dropped the jigsaw to the ground.  But I did so carefully, because running inside to look at my face would have been even more difficult if I were to chop my ankles off by carelessly dropping the saw.  And whenever I hurt myself with a tool, I'm always very careful with that tool for the next hour or so.

I ran into the house and looked in the first mirror I could find.  The first thing I noticed was my hair was a wreck and I made a mental note to make an appointment as soon as possible..  Next, I opened my mouth and sure enough it was filled with blood.  That's what happens when your bottom teeth go through your lip.  Which is what happens when you withhold resting, eating and peeing.  And getting your hair done.

I quickly covered my mouth with a face cloth (black of course) and ran upstairs to the bedroom where my boyfriend was convalescing. He has a cold.  I burst into the room and he said "OH MY GOD!  What's wrong with your hair?".  I explained I needed highlights.  Then I showed him my already ballooning lip and the two largeish holes inside where my teeth went through.  I asked him what he thought I should do.

Evidently this whole lack of sleep, food, and peeing had got to me even more than I'd realized.  I was yet again asking the medical advice of the same person who told me I didn't need stitches to my finger during the last Coop accident.  The same person who stuck me together with Crazy Glue and a bandaid and told me to get back at it.  (I'm going for physiotherapy on my finger next week by the way)  So ... as I said ... clearly not thinking straight.

He advised "numb then one".  Numb the area with an icecube and then for a minute longer.  Dr. Crazy Glue told me the lip was going to get fat no matter what, but the ice would help reduce it.

At this point, I'd just about had it with power tools, building things, ugly hair and sweaty clothes.  For 2 months I've felt like a wreck, looked like a wreck and have basically been running in circles trying to get everything I need to get done, done.  My boyfriend could see I was one lip quiver away from a breakdown.

It was at this point he tried his hardest to say something supportive..  He got the  most caring look in his eyes, put his hand over mine and said "Don't worry.  Now you're going to look like an actress!"

I laughed so hard I started spurting blood.  Nothing says "I think that's funny" like spewing blood all over the joke teller.  Try it at a comedy club one night.

And guess what?  He was right. 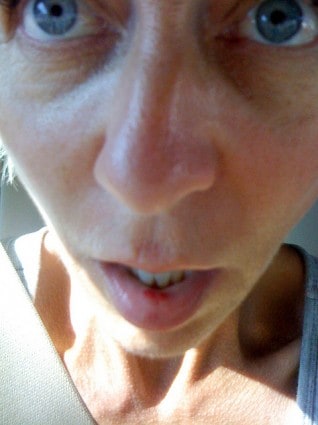 Suck on that Angelina Jolie. You'd be really threatened if you could also see my hair.

It's finally done.  Click here to see the finished coop. 2 injuries, 3 months and about a thousand dollars later.