Home » Chickens » Keeping Chickens » BREAKING NEWS! What came first the chicken or the …

BREAKING NEWS! What came first the chicken or the …

I INTERRUPT THE REGULARLY SCHEDULED POST TO BRING YOU THIS BREAKING NEWS!!!!! 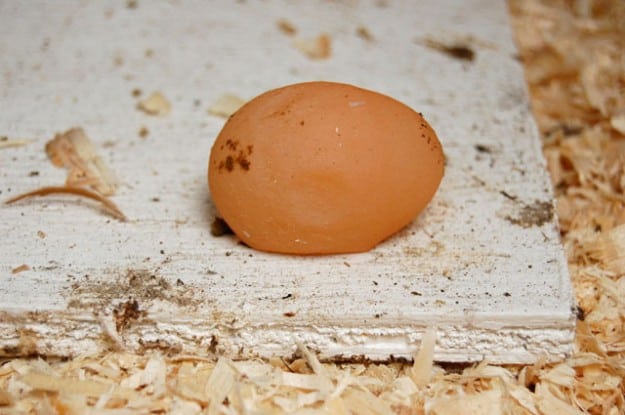 I APOLOGIZE IF IT SEEMS LIKE I’M SCREAMING, BUT I AM!!!!

O.K.  I’ll try to calm down now and tell you the story of how this all happened.

Hold on.  I need a drink of water.  And maybe some smelling salts.  This whole episode has given me the vapours.

Before we get into it I should probably explain the whole egg thing.  YES.  Chickens can lay eggs without a Rooster.  Hens produce an egg every day the same way women produce an egg every month.  You only need the Cock to fertilize the egg to produce a chick/baby person.  I hate that word.  You know which one I mean … but it seemed appropriate for the story.

Alrighty …. so I went outside this morning as I do every morning to tell the chickens to be quiet.  They’ve been a bit of a heat score lately, screaming at the top of their lungs.  You see … I’m not entirely, completely sure that chickens are actually legal in my part of town.   Heh, heh.  Cough … sputter … yeah.  I’m kind of positive they’re totally illegal as a matter of fact.  So.  Anyhooooo  … ignoring that whole issue … the hens are acting up this morning so I went out to give them some treats.

Every morning it’s the same thing.  Say hello to the girls, give them some treats and check the nesting box for eggs.  I’ve been checking the nesting box since it was built.  Even prior to putting the chickens in the coop.  I’m hopeful that way.

So I fed the chickens, checked the nesting box (empty), and then decided to clean out their coop.  As soon as I opened the big double doors, I saw it.  And I was stunned.  For someone that’s been waiting and checking for an egg every day for the past 4 months, you’d think I’d be more mentally prepared.

I slammed the doors shut so no chickens could escape, ran into the house got my iPhone, the camera and a few different lenses.  RACE back outside in case the egg decides to walk away.

Phew.  It’s still there.  So I take one picture of the egg on my iPhone so I can send it to family members and then switch over to the real camera.  By the time I got 1 picture taken, the girls started making their way into the coop.  Like so … 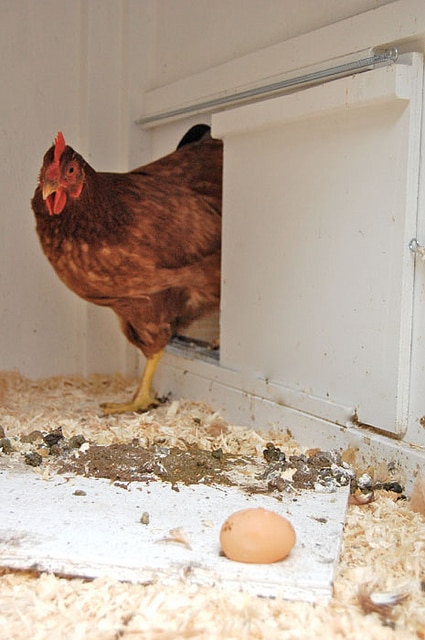 That by the way is exactly how disgusting a “poo board” becomes after one night under 4 chickens.  I was too excited about the egg to worry about offending you with the dirty poo board so you’ll have to deal with it.  Gross.  I know.

It seemed awfully cute!  A chicken had come to inspect the egg.  The egg, by the way, had a shell as soft as tissue paper.  You can see my finger indent where I touched it. 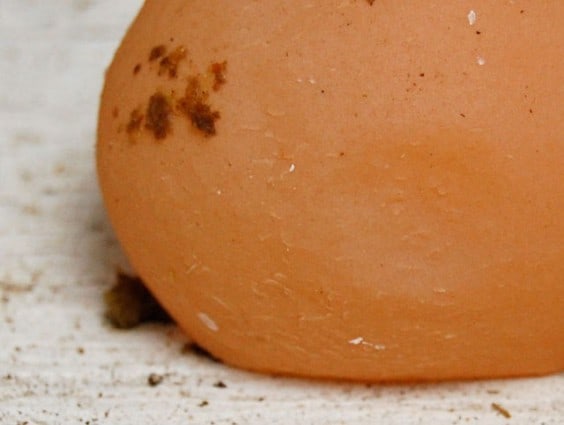 Chickens get better at making eggs with practice.  Plus now that they’re laying eggs I’ll start giving them more calcium in the form of milk and oyster shells.  It helps to make their shells strong the same way it helps to make your bones strong.  ‘Cause I know you’re all sitting around eating oyster shells.

Norma made her way over to the egg.  Norma has ALWAYS been the most curious chicken.  So curious I considered changing her name to George.  I suspect the egg was laid by Norma because she’s the most mature looking. 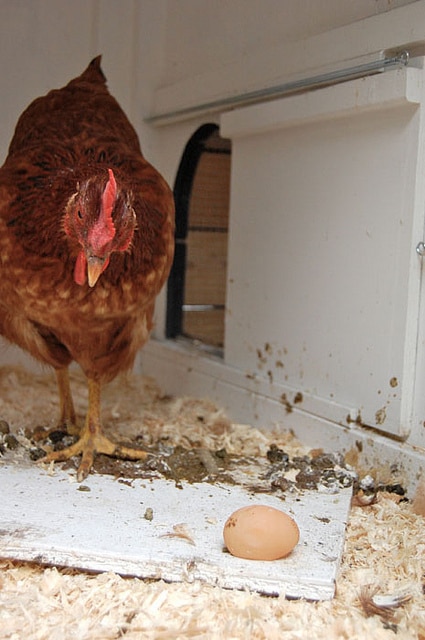 After looking at the egg for a milisecond she tilted her head back as far as it would go and smashed her beak into the egg.  Seconds later Walnut showed up and all hell broke loose. 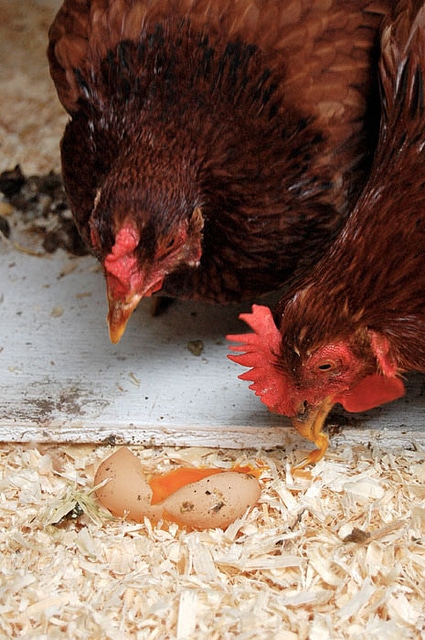 THEY ATE THE EGG!  WITHIN SECONDS THE ENTIRE COOP WAS FILLED WITH CANNIBALISTIC CHICKENS! 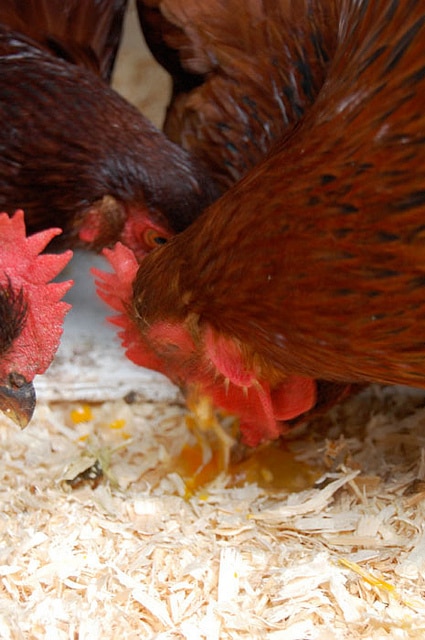 Prior to them eating the egg I should have stopped them.  I should have done something. Anything!  But I was so stunned, and looking at it through the lens of the camera as it was happening made it even more surreal.   It was horrifying on so many levels.  #1.  My chickens are born cannibals.  #2.  My chickens are eating MY eggs!  If those hens wanna eat eggs, they can raise up a duck from scratch and built it a coop and feed it and so on and so forth. Until they do that, they’d best leave MY eggs alone!

So … straight to the Internet to find out what to do about this little problem.  Suggestions included giving the hens a bowl of milk in case they’re craving the calcium in the egg.  It also suggested you put a fake egg where the real egg was.  They’ll come around, bash their beaks on it and when nothing happens, they’ll lose interest in eating eggs.  Finally … if these two techniques don’t work, break an egg into the coop but spice the yolk with tabasco and pepper.  They won’t like it and they won’t come back for more.

I did the first two suggestions and I’m hoping it’ll work.  If not … I have a certain pepper grinder waiting in the wings …

Back to our regularly scheduled posts tomorrow …  for those of you who haven’t seen it … see the entire coop I built here.