Home » House » House Tour » BRING IT ON NEW YEAR! SHIT’S ABOUT TO GET REAL.

BRING IT ON NEW YEAR! SHIT’S ABOUT TO GET REAL.

But I feel like at my age it’s time to slow down my Ninjaing.  This is my New Years Resolution every year by the way.  To slowwwwww down.  To stop whipping around all hours of the day and night and hang out with the other Ninjas who have slowed down, discussing our past accomplishments over $1.99 breakfasts in a Ninja friendly Boca Raton strip mall restaurant.

I still like doing things, I love doing things in fact, but when you’ve been doing things your whole life, non-stop, there comes a time you’d like to not do things.  Or at least not do them so quickly that your neighbours refer to you as a Chihuahua on speed.

Here’s a list of some of the things I’ve done to my house in the past 15 years. 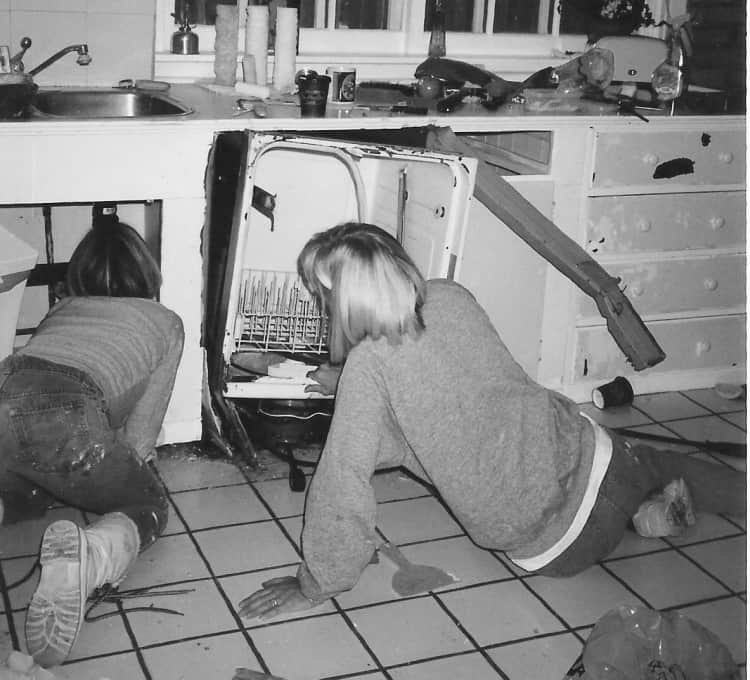 The first year in my house I fixed all the weird things that the people before me had done. Like cementing the dishwasher that didn’t work to the floor or covering up the “awful, stupid subfloor” with dirty carpeting.  The awful, stupid subfloor was 20″ pine planks from 1840 by the way. I ripped up, sanded, drywalled and painted every inch of every room, installed new appliances and tricked out the house with central vac. Let’s keep in mind when I say I installed the new appliances I mean that I, me, installed the new appliances. I ripped out the dishwasher with the help of my sister and a random delivery guy that appeared at my door at the time we were doing it, and I bought the new dishwasher and hooked it up myself. The delivery guy said he couldn’t stay long enough to help me install it. Something about this being really weird and not having time and unlawful and restraining.  Something like that.

In the first years I also hired a company to replace my backyard fence which was teetering over like the cast of Shameless at an ankle monitor removal party.  (open bar of course)  The fencing company built one entire panel of the fence to be about a foot shorter than the rest of the fence and secured everything with nails that were 2″ too long and stuck out the other side like a vertical version of a bed of nails.  In this company’s defence at least when they showed up to give me a quote they arrived upright and sober as opposed to the first guy who showed up at 10 a.m. smelling like Boris Yeltsin and leaning as far over as my fence.

That’s the time I really became a Ninja, fixing, making and doing pretty much everything myself.  If it can’t kill me or permanently mess my hair I do it myself.  That means things like electrical panels and roofing replacement are jobs I hire for while everything else is either done by me or at least attempted by me. 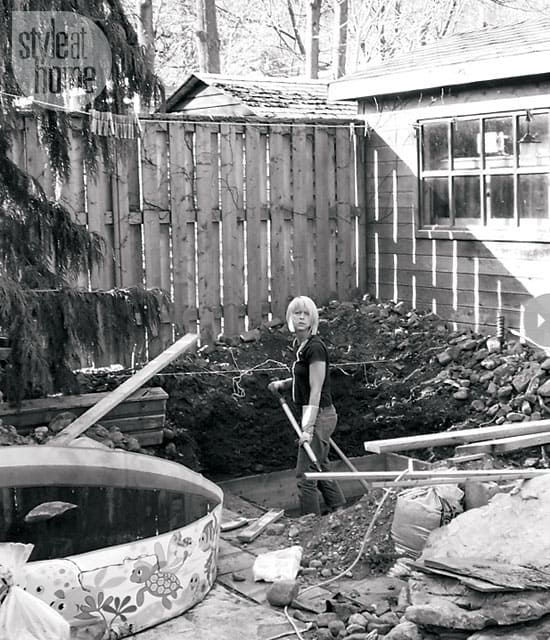 Seriously. LOOK at the size of my biceps after about one month of hard labour. Crossfit can suck it. Just do shit yourself if you wanna get fit.

In 2007 I ripped out my entire backyard, everything in it and started from scratch.  This wasn’t  a whim, like OooooOoooo wouldn’t it be fun to haul ass, shovel dirt and compress my spine for 3 months?  The same owners before me who warned me of the “awful, stupid subfloor” had done a really great job of designing the backyard with the worst possible material choices imaginable. I mean if they had chosen to pave the backyard with marshmallows it would have been a better choice than what they went with.  The flower beds around the backyard were 1″ thick cedar boards with  no barrier between the soil and the cedar which meant it took all of around 3 years for them to completely rot away. The ground was paved with slate, which is a beautiful material when used either in a bathroom, hallway or high end Hawaiian outdoor massage parlour.  It’s not the optimal choice for an outdoor patio in Ontario, Canada where for 6 months of the year the ground gets wet, then freezes, then heaves, then thaws.  Slate is all shaley so the second water gets into it and freezes it expands, basically making the slate erode and explode then eventually turn to magical slate dust. No seriously. It’s like magic. One day you have a beautiful patio, and the next day you walk out to  what looks like a violently sharp sandbox.

So I redid the entire backyard with more appropriate materials like flagstone and 2″ thick wood for the beds.   I also redid the pond by digging it out larger and changing the shape, adding some waterfalls and a few tiered levels. I’ve stuccoed the back of the house (hired people for that actually since stucco in my hair could probably ruin it forever), built a 2 level chicken coop and a really fantastic cob pizza oven.  Myself.  With my own two hands that seem to know the difference between a bottle of wood glue and a bottle of Vodka. They’re also pretty good at knowing the difference between a  1″ and a 3″ nail.

I also had the redone fence redone again by a contractor I’d struck up a good relationship with after he rebuilt my historic porch and everything came out the same height.

REDOING THE ENTIRE INTERIOR IN A SINGLE MONTH 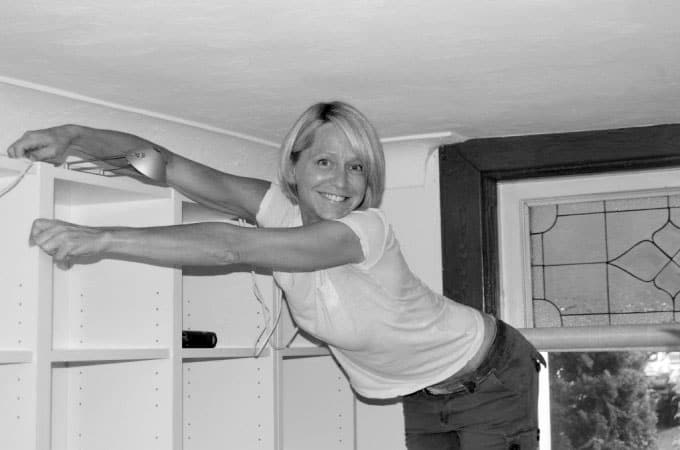 At the time of my big house makeover, I ran an antique booth at an open antique market so a lot of my curb finds were sold there and everything else was either gifted, sold on Craigslist or returned to it’s natural habitat, the curb outside of student housing rentals.

With the money I  made plus the money I’d saved over the years by doing everthing myself I took one month and redid my entire house.  Painted the whole thing white, had a dining room table custom made, found a new couch, new accessories and installed the all important bookcase in my foyer to hold the books that had previously been stored under anything that was higher than 2″.  Couches, chairs, dining room buffets, the cats.

I flew through this project at such an impressive speed I considered starting a business doing it for a living but the only business name I could come up with was Speedy Interiors which sounded weirdly like a hipster laxative. 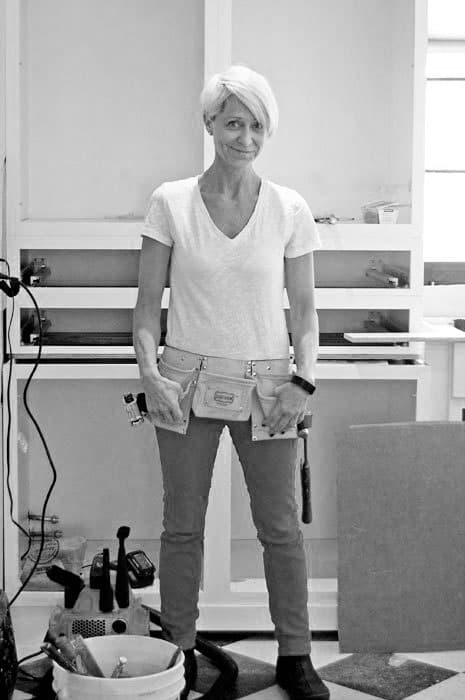 In the past few years I’ve ripped out my front yard to put in a front yard vegetable garden, taken on a 20X40′ community garden plot and redid my entire kitchen. I also switched over from pre-ground coffee to beans which may not sound like  big deal but basically solidified my entry into the world of grown ups.  My furniture was now “purchased” as opposed to dragged away and I ground my own coffee every morning while floating from room to room, head tilted back, laughing playfully in case someone was looking in my windows. I wanted them to see I was a well adjusted, coffee drinking grown up without a care in the world about  having curbside furniture bedbugs. 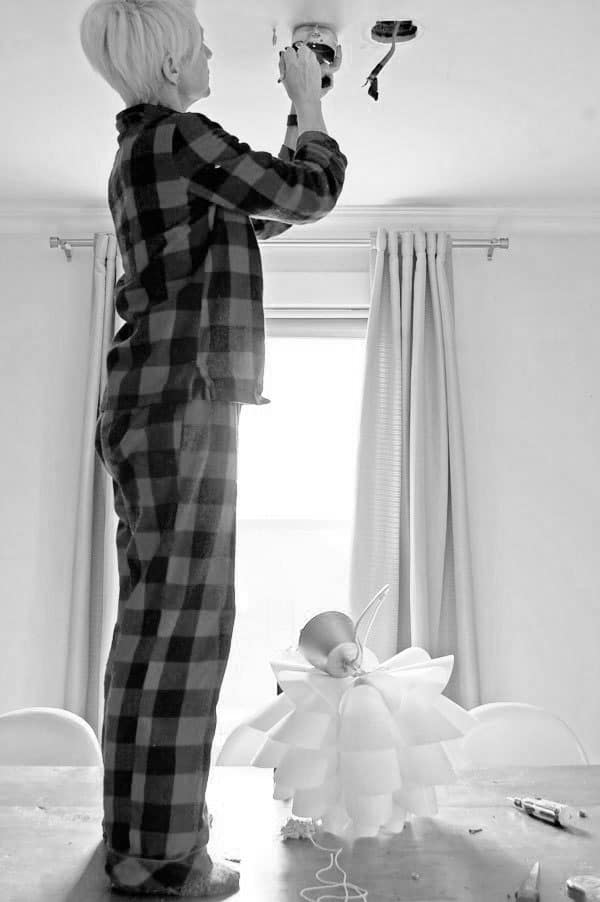 Last year I made a list of what needed to be done like I do every year and started tackling it with the non-stop energy of a Ninja full of coffee made from freshly ground beans. I painted, stained, rehung lights, moved garden plots and lifted more slate.  I nursed my chicken Cuddles back to health. Twice.  All of this by mid-summer.  And then something weird happened. I saw that the 10 year old garden beds around my backyard were starting to rot and I left them. I just left them to rot. I propped them up a bit, said a little Ninja prayer over them and wished them well until next year. Normally I’d be right on those garden beds, ripping them out and replacing them like … well like a Chihuahua on speed.

But not last year.

Last year I said. Meh.  I’ll leave it for another year.  Who cares.  I was having a really good time taking care of my community garden and spending more time writing and talking to people in grocery stores about how yes, I am super-funny, and yes I do like it when they tell me that.

Which brings me to this year.  Here it is January 4th. The entire year of doing stuff stretching out before me at the exact same time I’ve decided it’s time to semi-retire from being a nutcase.  What to do, what to do.  I know I’m dying to get this whole house cleaned up from top to bottom, and like every January I’m thrilled to have the Christmas crap relegated to the basement alongside the Easter and Halloween crap.

In fact, I’d like to clear things out even more. After 7 years I’m kind of thinking it’s almost time for another house makeover. Not quite as huge as the get rid of everything I own, rubbing my hands together and cackling makeover of 2007, but big enough that there’s a dramatic change.  For one thing when I made over my house, I never did find a living room chair to replace the one I found in the garbage. I’ve never liked my coffee table and even though they’re crazy-useful I’m getting sick of the Ikea Billy bookcases. Maybe they don’t feel like something a coffee grinding, semi-retired grown up Ninja would have.

My bathroom has never, ever been made over other than putting down heated floors, new flooring  and buying a new toilet for it a few year ago.  So that’s one thing I’d like to tackle on a really limited budget.  I’d also like to declutter the living room and give it a new look or feeling.  I threaten every week that I’m going to drag everything out of the living room onto the front lawn and slowly start putting pieces back in the room item by item. Anything left on the front lawn gets a sale sign put on it.

Speaking of the front lawn, I also want to somehow make it look better. It’s really hard to make a front yard full of sprawling, 10′ high tomato plants look like anything other than a condemned lot that may or may not be home to Randy Quaid.

Then there are those beds in the backyard that I shunned last year.  Those pretty much have to be done this year.  It won’t be as big a job as the first time around but it’ll still be a big enough job that the neighbours should probably keep their kids inside for a couple of weeks while I scream my newly invented swear words from approximately 9 a.m. to 9 p.m. while also shouting out a lot of the old favourites.

Also on “the list” for this year are refinishing all my wood floors, redoing the roof of the chicken coop, building a couple of new gates for the backyard and building some sort of antique looking bookcase in my upstairs hall because my stairs are so narrow and my windows are so small I can’t actually get anything up to my second floor. If I want a half decent sized bookcase I’m going to have to build it myself and I’m going to have to build it where it’s going.

Let’s review the year ahead ahead shall we?

Build an “antique” bookcase from scratch

That list seems kindda fun actually.  I’ve got gates to build, bookcases to erect, foyers to make sparkle, living rooms to redo. There’s a backyard that needs new beds, a dining room that needs sprucing up and floors that need refinishing.  Also there’s a book to write, Randy Quaid to kick out and new swear words just waiting to be invented.  I’ll slow down next year.  I’m gonna Ninja the hell outta that list.

Look out New Year. Shit’s about to get real.

ARE YA WITH ME?