Last night my boyfriend asked me go grab him a bar of soap before he jumped into the shower.   Apparently he couldn't get it himself because he was naked and didn't want to go wandering around the house with the blinds open whilst naked.

I don't know why not.  He does it all the time.  Men, I'm convinced would grocery shop, mow the lawn and change their oil naked if they thought it wouldn't involve a trip to the local police station afterwards.   And whether they have a good body or not has absolutely no bearing on their decision to prance around naked.  Where women have disproportionately poor body images, men have equally disproportionate inflated body images.

This gut?  This one here?  Show's I'm determined!  And that I always clean my plate.  And my beer bottle.    And  more importantly, I'm ready to dress up as the always hilarious pregnant nun at any given moment.  Besides.  "Outie's" are sexy.

What does this have to do with broccoli soup?  Nothing. But it's a good story.

So I then asked my fella why he couldn't use the soap that was already in the shower?  He picked up the 3 largeish slivers or soap from the soap dish and proclaimed "I do not use slivers!" before dramatically throwing them into the hair filled garbage can with a flourish.

It was at that point I informed the fellow that we didn't have any more bars of soap.

So he had to fish the soap out of the worst, most disgusting garbage in the house. The bathroom garbage.  I felt kind of bad for him.  It definitely took the wind out of his sails having to bathe with soap filled with ick.

What you can expect, however, is ... eventually ... a broccoli soup recipe.  This one's perfect for a quick meal.  There's no measuring, very few ingredients and it only takes about 15 minutes from beginning to end.

Half & half Cream (optional) 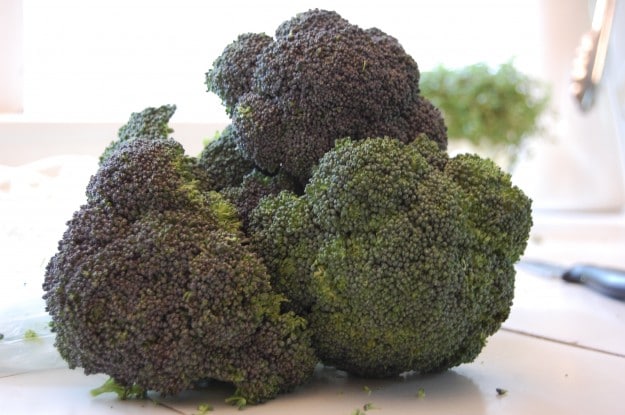 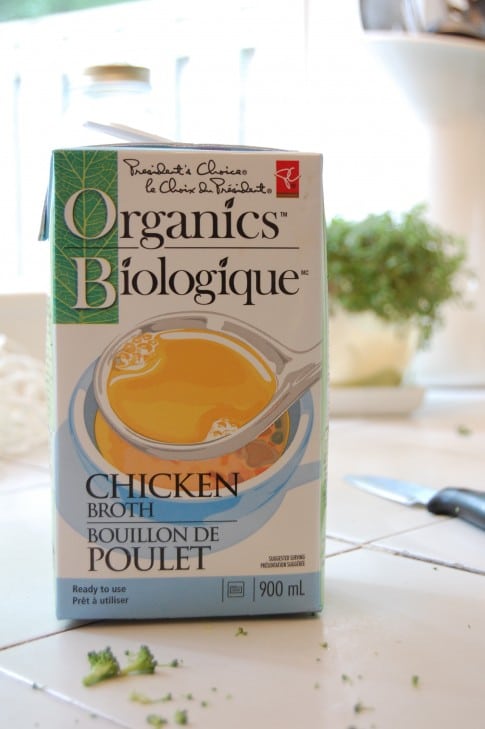 Put your box of broth in a pot and get it boiling.

Cut your broccoli up into bits.

Reserve some bits to add to the soup later.

Below are my "later" bits.  I've cut them smaller than the rest of the broccoli which I'm going to make the soup out of.

Cook the "later" bits in the microwave for a couple of minutes, or steam them.  They'll be added to the soup after it's blended.

If you don't like "bits" of stuff in your blended soup, skip this step. 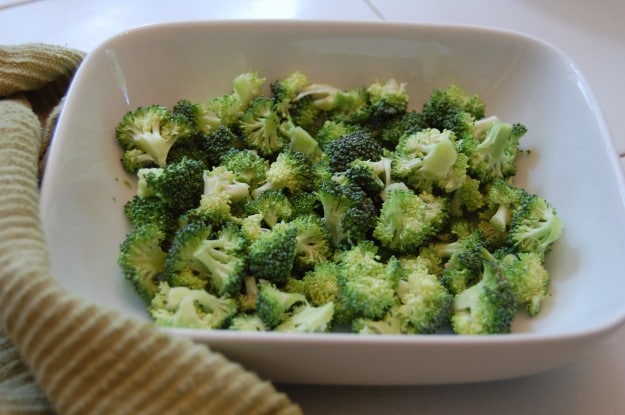 Add your broccoli to your boiling broth. (Not your later bits, the bigger bits)

Throw in some salt and pepper.  (no salt if your broth is already full of it) 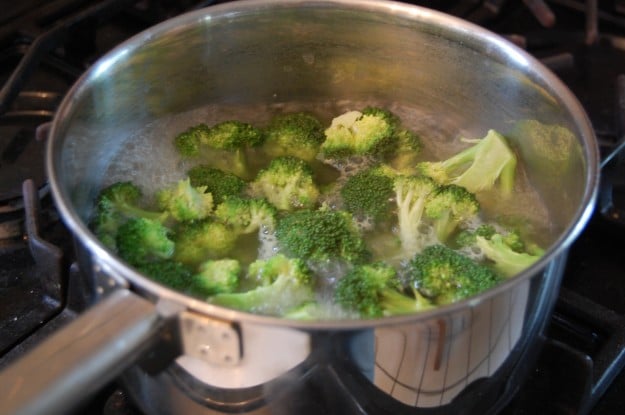 When your broccoli is soft (not firm at all) drain the liquid. 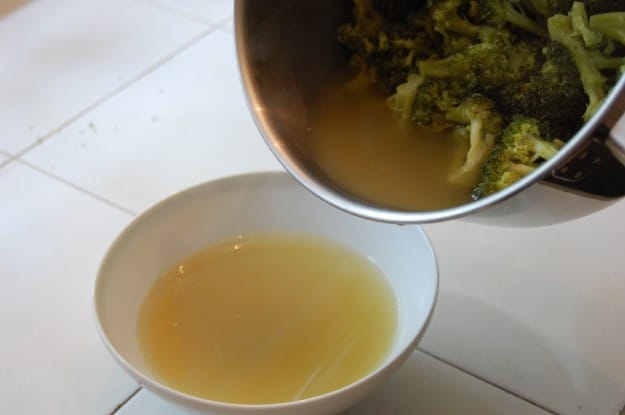 Put your broccoli in a blender and blend away.

If you only have an immersion blender that's fine. Use it.

If you only have a potato masher, you're probably going to want to invest in an immersion blender. 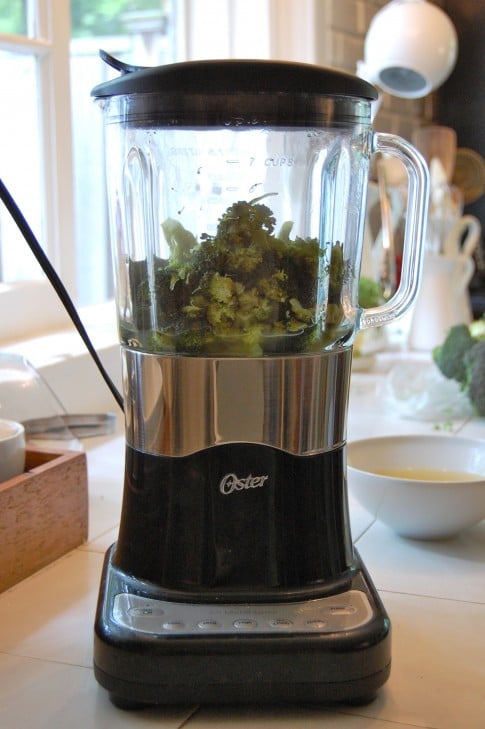 Little by little add the broth that you drained until the soup is the consistency you want.

If you added the liquid in at the same time as the broccoli and blended it you might end up with too runny of a soup.  Then your life would be ruined and you might even take to eating something like processed cheese and bread sticks for dinner instead.  Which would be bad.  Well ... on a regular basis it's bad. 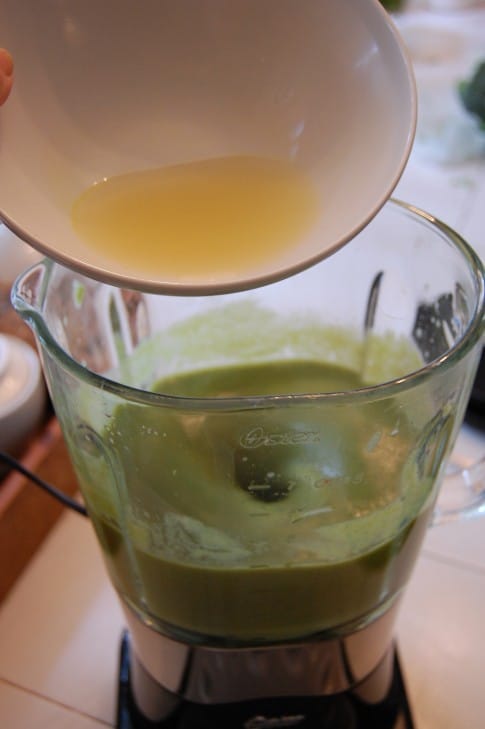 If you like cream in your soup (I do but didn't add any in this particular soup on this particular day) now is the time to add it.  Pour in a ¼  or so and give the soup a stir.  If you want more add more.  Simple as that.  Isn't this easy?

If you're one of the ones out there who likes "bits" in their soup, add them to the blender now.  Do not blend afterwards.  Dummy. Then you'd lose your bits. 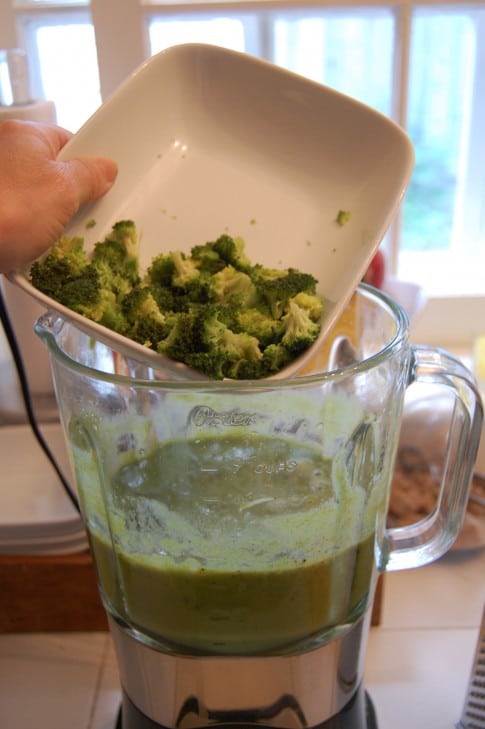 Shred a little cheddar cheese and put it in the bottom of a bowl. 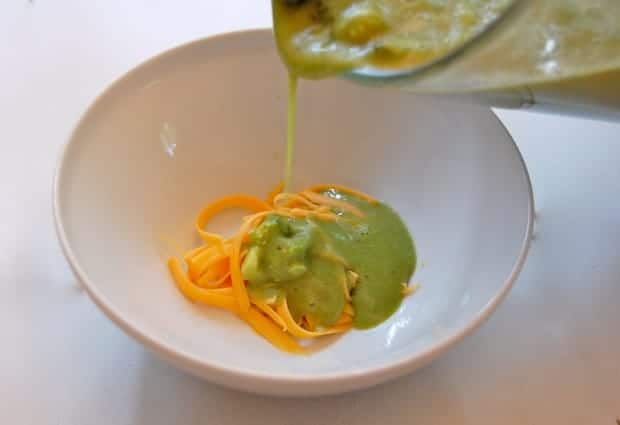 Top with garlic croutons and enjoy. 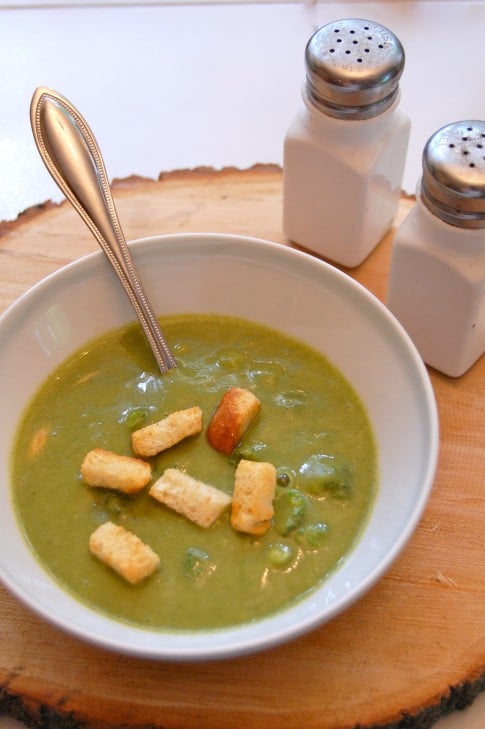 And don't forget to pick up soap.