Armed with little more than backpacks, canteens of water and energy bars, a group of specially trained people woke early Saturday May 26th to finally accomplish what they’d been working towards for months.

After months of research, special training and practice, those who can only be described as the elite in their field, strolled, hopped, skipped and jumped their way through the Christie Antique Show & Sale.

It was a licensed event so there was a little crooked meandering as well.

I am proud to say that I, my sister and my mother were all part of Team Antique at Christie’s this year. We were joined by what is scientifically referred to as a “bunch” of other people. Scientifically speaking.

We were going to invite the fella but frankly, none of us thought he could handle it. Crossfit? Heh. Antiquers EAT Crossfitters for breakfast. On a Blue Willow plate.

If you want to get what you looking for you can’t be passive or indecisive.  I lost a beautiful pair of black iron candelabras that way.  If you want to be a successful antique show shopper you need to possess a combination of stealth, weaponry, charm and decisiveness.  Being a little shifty doesn’t hurt either.

It was a quick run through this year that left one of our team members down for the count by hour 4.  She received hydration and is expected to be out for the rest of the season. 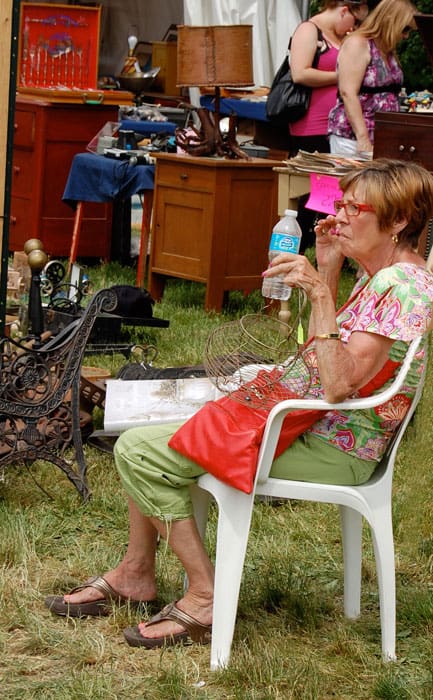 The rest of us worked through the pain and pressed on.

Here’s  a little of what we saw.

A lot of people complain that Christie’s is overpriced. And indeed … some items are. You get that many people in a confined space, all frothing at the mouth for something unique, old and decrepit, there’s bound to be a little price gouging.

But there’s also a lot of opportunity to get some great buys. The smart dealers who go are set up at Christie’s Antique Show are also there buying.

The 6th or 7th picture down from the top shows my sister holding a bust. A bust. Not her bust. It was one of a pair. As are most busts. I thought they were hideous. She loved them. And I have to admit they’re very her and would look great in her house. After a bit of debating (she knew they were a bit odd looking but loved them anyway) she slapped down the $50 for the pair of them (a girl head and a boy) and continued to wander around. We bumped into a very knowledgeable antiques dealer we both know and showed him what she got.

Turns out … she did quite well for herself. They’re Victorian era (probably around 1890) bisque busts worth … about $450. So there are deals to be had at Christie’s. Another lesson here is to just buy what you love. Don’t worry about it’s value or sometimes even it’s cost. If you love it … buy it.

For those of you thinking of attending the fall show, I have 3 words of advice.  Drink plenty of water, get lots of rest and eat well.  If it doesn’t prepare you for Christie’s you’ll at least be fully prepared should you ever become a celebrity and need an acceptable lie for how you stay looking so good.

The fall Christie Antique Show & Sale is being held on Saturday, September 8th.