A tour of my community vegetable garden for July of 2021. Complete with drone video, more row cover than I've ever used and a turtle giving birth in my potato patch.

It's currently July 20th as I write this post. These photos were taken just over a week ago. By the time this post is published a few more days will have passed. Why am I telling you this? Because by the time you see these photos everything in the garden will have doubled or even tripled in size. All in the span of 2 weeks.

If you're looking longingly at this post it could be you need to start your own vegetable garden. This beginner's guide on how to start a vegetable garden might be a good one for you to look at.

In fact, if you take a look at the tall row covered structure in this photo you can see the cucumbers have grown almost halfway up the house. As of today, (a week and a half after taking these photos) the cucumbers are all the way to the top of the structure and making their way across.

In fact they got so big I had to make the tunnel taller by adding some hoops to it. Watch for the taller hoop house in this drone video that gives an overview of my garden.

If you spotted me sitting in my chair in the back of my garden YOU have just witnessed the longest sitting session in my garden to date. I do not know why I have those chairs there. I rarely use them. They're there for when I get visitors to the garden, but since COVID is still a thing we aren't allowed to have any visitors to the garden.

Which SUCKS. Half the reason you and I garden is so we can show our gardens off to other people. Just like we do with scabs and bruises.

One of the big hits of my garden is always the loofah sponges. If they've always been on your list of things you're curious about growing (or you're mind is currently blown realizing that you CAN grow your own loofah) then read my guide on how to grow luffa sponges at home.

Garden from Back to Front, Left to Right.

Squash, potatoes, zucchini, a mess of potatoes and Amaranth.

The border running the length of the left side:

Garlic (which has since been pulled), dahlias, second planting of broccoli.

The border running the length of the right side:

The reason for grafting tomatoes (literally chopping off the tops of tomato plants when they're young and clipping them onto a strong rootstock) is to get the disease resistance and production characteristics from the hybrid rootstock while keeping the flavour and look of the heirlooms.

Grafting is one of this year's experiment in my garden.

Another experiment was creating this arbour. You normally see these types of arbours in gardens made out of something called hog panel. Hog panel is very stiff, heavy, metal mesh. Strong enough that a 250 lb pig wouldn't be able to break out of it.

They sell it at farm supply stores. The problem with hog panel is it's heavy and big. You need a truck to ship it and even then it can be a pain to bend it into shape in the truck bed.

I do not have a truck. I have a Volvo.

So for years I've wanted to build one of these arbours but couldn't figure out how to transport the hog panel. Then one day at my local feed store I found goat panel. It's like hog panel but slightly more delicate. You can roll it up.

So I grabbed a roll, put it in my car last summer and couldn't wait until spring to see if this would work. So far so good.

If it proves to be 100% successful (doesn't come crashing down with the weight of the gourds that are going to grow over it) then I'll do a post on how easy this was to do and how it did not require stealing a truck.

Here you can see the rye just before harvest. I planted it last fall as a cover crop on several of my beds, tilling the green plants into the soil at the beginning of the season as a green manure to nourish the soil.

This small section I left for seed for the cover crop next year and for making rye flour.

The most important thing for a garden is to keep feeding the soil.

One of the biggest mistakes I see people make is not taking care of the soil on an ongoing basis. You need to feed it whether you use a commercial fertilizer, compost or cover crops like this.

1. You plant your garden and the plants take up both water and nutrients that are in the soil. This gives the plant energy to grow. Certain crops are "heavier feeders" than others. For the most part, plants that grow ABOVE the soil are heavy feeders. Things like corn, tomatoes, and zucchini. Plants that grow BELOW the soil are light feeders. Things like beets, carrots and potatoes. This means beets and carrots will do fine in slightly depleted soil. Tomatoes, corn etc. will NOT do well in depleted soil.

2. At the end of the season you pull up your harvest, happy that everything did so well! You are a FANTASTIC gardener and should definitely consider starting a podcast about gardening.

3. You plant everything again the next spring and everything looks small and crappy. You cancel your podcast and cry. You don't know why everything looks so terrible. I know why. It's because last year's plants used all the nutrients in the soil. This years plants want so badly to grow for you but are starving to death.

So feed your soil. At the very least at the end of every season cover your garden with a 3" layer of compost. You can also feed your soil when fruit is forming to give an extra boost of nutrition during a time when the plants are expending a lot of energy.

People always ask me how I rotate my plants in the garden. I don't. Some things I will rotate, but when people talk about rotating crops it's really a concept meant for large farms that have acres in between crops. But in a backyard garden it just isn't all that possible.

If you move your garlic 15 feet away from where you grew it last year it isn't going to make any difference to the pest. Bugs have been known to travel 15 feet.

Now if this entire area was my garden, it might be beneficial to migrate crops from one corner to another. But not in a single plot.

Speaking of migration, the day I went to the garden to take pictures as soon as I walked in, I noticed a little something in the pathway into my potato patch.

A 4 year old painted turtle had just laid her eggs.

My garden is right smack dab in the middle of a turtle sanctuary and is monitored by turtle people. I happened to have the phone number of one of those turtle people on me so I texted her right away. She was at the garden within 15 minutes and collected the eggs to bring home to incubate. Once hatched in 11 weeks she'll release them into a swamp/marsh so they'll have 100% survival of making it to water when they're born.

In other critter news, I had to cut my wheat down earlier than I wanted to because the rabbits took a liking to it. In fact seconds after spotting the turtle I took a few more steps and found a rabbit taking off from my wheat patch.

The other thing I did a bit differently this year was to really make use of row cover to keep pests off of my plants. Some covers will stay on the entire season, others I take off once the plant is big enough to withstand a rabbit or mouse attack.

Potatoes I grew both under cover and without. I'm testing whether the row cover does a good job of keeping out Colorado Potato Beetles. These things can decimate an entire potato crop. In fact they decimated mine last year which you can read about in this post on how to grow and harvest potatoes.

So far it does look like the under cover potatoes are doing better and even though there were a few potato beetles under there, it wasn't nearly as much as the uncovered potatoes.

July really is the month your garden looks its best. Things are in tip top form, blight hasn't yet set in, there aren't big gaping holes where you've pulled out your failures (or successes!) But it isn't the end of planting.

In the past week I've planted second crops and you can too.

I'm sure there's more, but those are the main crops I do a second planting of at this time of year. If you decide to try a second planting of something remember it takes longer the second half of the season than it does in the first because temperatures are lower and day lengths are shorter.

So for example if a seed packet says it takes 45 days to maturity, a fall season planting will take closer to 50 or 55 days to mature.

Questions? Ask away. I'll just be over here showing my garden off to nobody for the second year in a row.

P.S. If anyone wants to see my latest bruise let me know. 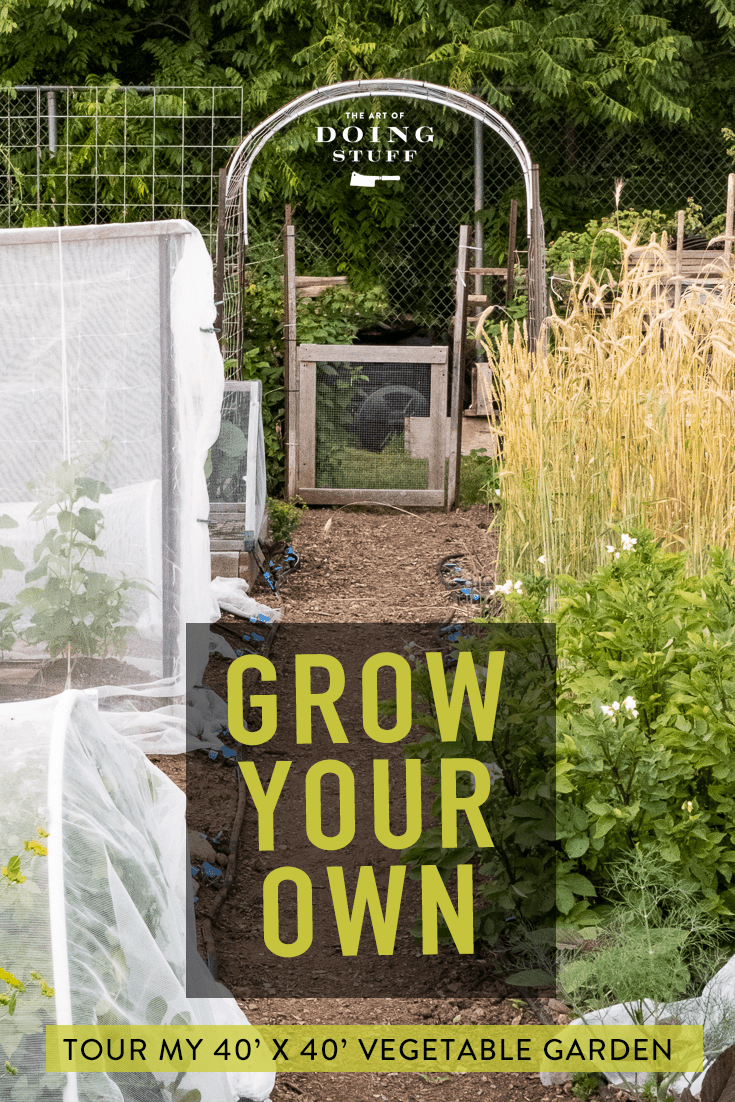