Cuddles is still cuddling. The last update until something significant happens.

O.K.  I had a different post planned for today.  A good one by the way.   Much better than this stupid movie Neighbors I’m trying to watch for some reason.   I was watching something a little more high brow but it was incredibly boring.  So I put this movie on.  Which is incredibly boring with the added bonus of making me feel bad about myself because unlike the intelligent, thoughtful movie, I’m actually still watching this one.

God I miss you John Hughes.

Up until half an hour before posting I was running that post I had originally planned for today damn it.  I was not going to go on about Cuddles again.

Then I took a look at her sleeping in the coop and caved. 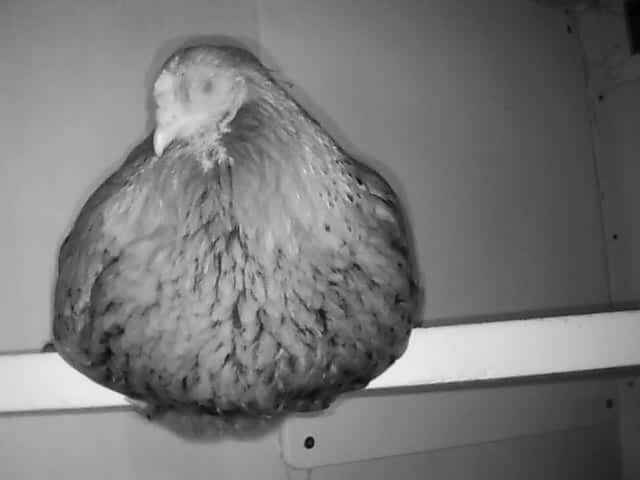 I also figured I couldn’t just stop posting about Cuddles because all of the comments on today’s post would be asking about Cuddles regardless of what I was talking about in the actual post.  When you people grab onto something there’s very little to stop you.  See the comments regarding the Silver Fox in this post for example.

This will be the last Cuddles watch until something significant happens.  Either good or bad.  I’ll post the odd update on Facebook so you can check in there if you need to know what’s going on.

Today I spoke with several vets and one nice lady from the Internet.

Terry Golson runs the website HenCam.  She’s the original coop cammer.  She answered my questions and supplied me with follow up emails all day long.  She’s been keeping chickens for years, gives workshops on keeping chickens and does her own chicken necropsies (chicken autopsy).  She is full of information and willing to share.  What I liked best about her was she didn’t sugarcoat anything.  Cuddles could die.  In fact she probably would. In her opinion Cuddle’s symptoms were what you would expect from a hen with cancer or a very, very bad infection.   She outlined her reasons for thinking this including the fact that Cuddle’s poop is still green even though she’s eating.  Later in the evening I sent her some new information including the fact that Cuddles had a dust bath today and she was quick to reply that that was very, very encouraging.  Chickens who are getting ready to die, don’t bathe.  But they don’t have green poop either.  Reason for optimism and reason for pessimism according to Terry.  I agree.

Mike Petrik runs the website Mike the Chicken Vet.   He is a poultry vet exclusively and as it turns out is just a few towns over from me.  Just hearing Cuddle’s symptoms he had a few ideas in terms of what may be wrong with her and he gave me some good, solid information.  But most impressively after I emailed him originally a couple of days ago, he took it upon himself to go to my blog post and ask how Cuddles was doing.  Mike the chicken vet was a great help.

Mark Camilleri is a cat vet at a cat clinic I used to take one of my cats to.  :)  But he also happens to own rare chickens and is a registered poultry judge.  He was also incredibly generous with his time and called me on the phone to see how Cuddles was doing and what her symptoms were like today.

With all this new information I sort of extrapolated from everyone I decided I should do a couple of things, one of which was take Cuddle’s temperature.  A chicken’s temperature should be around 104 or 105.  Cuddle’s temperature was 107.5 yesterday afternoon.  Walnut’s by comparison was 105.  So that meant she has some sort of infection.

She was in much better shape yesterday, moving around and eating the Michelin star food I was syringing her.  On the menu today was a chicken crumble, mineral oil, pumpkin, oregano, yogourt and honey smoothie. 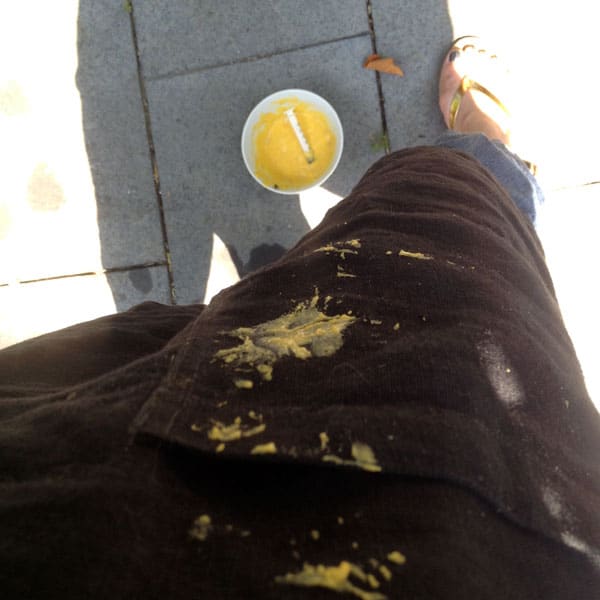 By the afternoon she was still pooping green but it looked slightly more like regular poop.  By late afternoon she was sun bathing.  And by sunset she was eating a whole leaf of romaine lettuce by herself.  All good signs.  Except for the poop.  It’s the damn poop.

So I called Dr. Robinson, who did Cuddle’s fecal smear the other day, and told him she had a fever and did he think she should be on antibiotics again?  Dr. Robinson explained because it seemed like her body was trying very hard to get better in terms of her behavior, he’d like to leave her for another day to see if her temperature would come down on its own.  He would prefer to see an animal get better on their own without the interference of antibiotics if possible.  This way there isn’t any disturbance in her gut flora which could create more problems down the road.  He wouldn’t have recommended this if she was still lethargic and uninterested in grooming or food.

So some time this afternoon I’ll take Cuddle’s temperature again. If it’s low, we’ll continue on as we are now.  Feeding her stuff she’s happy to eat with the hope that she’ll get her appetite back enough to go back on her regular feed.  If her temperature is still high she’ll get the same treatment but also go on antibiotics for I’m guessing 5 days.  Then we’ll just have to wait and see if she pulls through and her poop clears up.

The general consensus from all vets and experienced advisors was if Cuddles doesn’t eat on her own or gain weight  in the next 5 days or so, it’s a sign that she’s very sick and I can have her euthanized in good conscience.

But that’s a ways off yet, so I will continue on with with holding Cuddles, syringe feeding Cuddles and doing laundry.  Enormous amounts of laundry.