We all know what it is, but why exactly is Black Friday called Black Friday? The TWO truths behind the name of this wildly popular holiday are revealed. 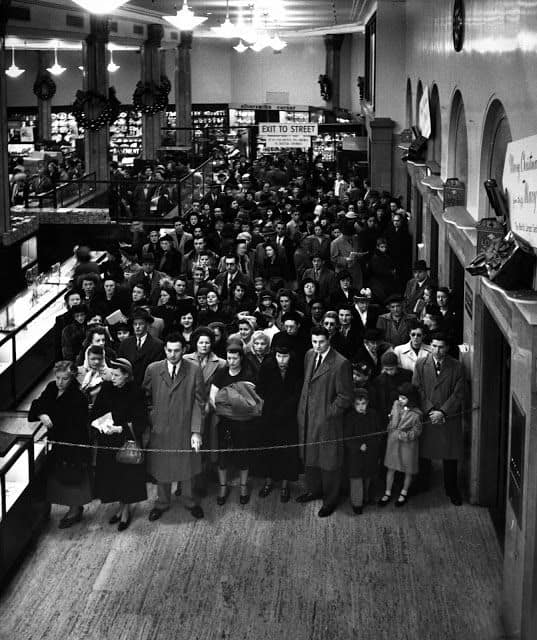 Hello everyone. Sit yourselves down.  I have a holiday treat for you.

This is the story of how Black Friday was born.

In 1951, business owners across the U.S. were faced with what to do about a problem that had been escalating over the years.  Their employees were all coming down with what the November 1951 issue of Factory Management & Maintenance magazine referred to as “Friday-after-Thanksgiving-itis”.  Employees across the land were all mysteriously coming down with colds, sore toes, stomach flus and general malaise the Friday after Thanksgiving.  I mean it was WEIRD.  You see,  at that point in time the Friday after Thanksgiving  wasn’t a paid holiday.  These people wanted a 4 day weekend so they took it upon themselves to get one.

In the magazine article, the author mentions that the amount of people “falling ill” on the Friday after Thanksgiving was on par with the Bubonic Plague – otherwise known as the Black Death. He then goes on to use the term “Black Friday” to describe the annual day of communal sickness across the nation.

Factory owners and other businesses that year began adopted the practice of giving their employees that day off since they weren’t going to come in anyway.

It was quiet for another decade or so until the term Black Friday popped up again.  And this time it stuck.

Picture it.  The Friday after Thanksgiving, 1961, Philadelphia.  It was a cool 48 degrees and raining.   Many people had the day off, kids were out of school, and today was the day that Santa was making his very first appearance in department stores.  Those same stores were also officially kicking off their holiday shopping with displays and different items they wouldn’t normally carry.  Hoards of people from all over descend upon the Centre City on foot and by car to get  their Christmas shopping started.  They park their cars on curbs and stop in the middle of streets, no traffic is flowing, intersections are blocked. It’s mayhem.  All traffic cops in Philadelphia were forbidden from taking the day after Thanksgiving off because all hands were needed downtown.

By later in the day even MORE people started to worm their way into the Centre City, landing in Philadelphia to watch the annual Army-Navy football game.  The police marching band has to be called in with trombone players directing traffic and reporters scrambling to the scene.

Now this wasn’t a new thing.  This had been going on for a few years, so when reporters assigned to cover the story, the police already had a term for the enormous gridlock that paralyzed the downtown every Friday after Thanksgiving.  The cops called it Black Friday.

In the mid 1960’s (possibly 1966) Philadelphia reporters Joseph P. Barrett and Nathan Kleger wrote a story for the front page of the Philadelphia Bulletin about the terrible traffic conditions and they reused the term they heard the cops using, “Black Friday” in their story.  They wrote a similar story year after year and soon enough television stations started using it too.

The description held true for what more and more cities across the country were going through.  It was an unpleasant name for an unpleasant experience.  Crowds, pushing, shoving, traffic jams and I’m sure more than one person giving another person the finger.  It was not the most wonderful time of the year. But this didn’t stop people from  heading downtown. In fact the more popular Black Friday became the more stores lured customers in with great deals.  Knowing that no one can say no to 50% off of anything the deals kept getting better and better and Black Friday kept getting worse and worse.

Since the late 1980’s people have thought that the term Black Friday referred to the fact that businesses could finally move from being in the red to being in the black during the month of November.  That rumour originated with the stores themselves, who were trying to put more of a positive spin on the festival of fracas.

There have been 10 Black Friday deaths and 105 injuries in the past decade or so.

Want a little advice from me?   Skip Black Friday shopping and head out to shop locally the next day, Saturday, which is shop local day.  Or, as it was known in Philadelphia in 1961 believe it or not … Black Saturday.