Scrumptious turkey pot pie (and I NEVER use the word scrumptious) filled with peas, carrots, turkey and just the right amount of gravy.  These pot pies are the epitome of comfort food and the best way to use up leftover turkey.

This is - for real - a delicious turkey pot pie recipe.  I know because I have very acute memories from my childhood to compare it to.  Ah, the sound of the little cardboard box opening, the frost covered mini aluminum pan landing on the counter with a thud.  Always, ALWAYS served with a bottle of ketchup and canned peas.  Some nights if we were very lucky and the pot pies had been sitting in the freezer for long enough we could actually taste the metallic aluminum with every bite.

These kind of meals were not uncommon in my neighbourhood at the time.  Every kid who ran outside after dinner to play a quick game of hide and seek either had fish sticks, frozen pot pies or canned mushroom soup on their breath.   Mothers worked, frozen stuff was always on sale and kids would eat it because it was a non threatening shade of beige and all pretty much tasted the same; like salt.

I found a recipe online that acted as a good base and over the years I've changed it over and over again until it's now ready to present to the world.

This is an easy recipe. Don't worry about it. You can do it.  But when I say easy, I mean it isn't difficult to make, but you ARE going to make it, from scratch.

The best part is you can use leftover turkey from Thanksgiving to make it, which is exactly what these you're looking at are made out of.  After Thanksgiving I stripped the remaining meat off of my turkey and the turkey I pilfered from my friend.  (Every year I pilfer at least one Thanksgiving turkey carcass from a friend or neighbour.) Those two turkeys gave me over 20 jars of delicious turkey broth (here's my recipe) and several of these delicious dinners.

You can make your own pie dough or just use a frozen crust.  You can make it BIG or you can make small individual ones. I used disposable aluminum pie tins from the Dollar store but I just saw that Amazon has reusable 5" pie plates that would be perfect for meat pies.

However, having said that, I often just do 50/50 because I'm math lazy. This is the genuine classic Canadian Tenderflake pastry recipe. It is now the only one I use. It. Will. Never. Fail you.

It's filled with chunks of turkey (you can use chicken if that's what you have), peas, carrots and seasoning.  Nothing weird.  Nothing you won't have on hand.  Well ... except the celery seed.  You might not have that and it is CRUCIAL.  The celery seed is what gives it that indescribable but delicious flavour.

It took a while to figure out the ratio of liquids I liked.  I like the pot pie to be creamy and gravy filled but I don't want it to be so filled with gravy that it oozes all over the plate when you cut into it.  If you're an oozer I've got you covered in the recipe, with an adaptation for you.

If you're short on time (say maybe it's a weeknight) you can make a quick version of this recipe by taking these shortcuts: 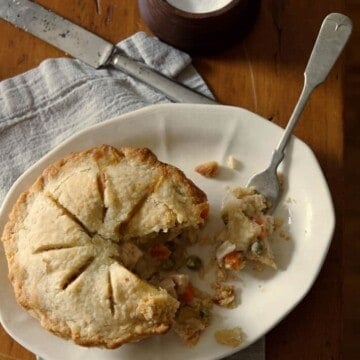 You bet! You can make these in advance and then freeze them unbaked until you're ready to eat them.

Again, yes!  If you've made extra filling you can freeze that for up to a year for best quality.

It's really a whole meal in itself, but if you like to have a side (I do!) then serve it with a salad. Roasted carrots or peas would also work really well with it and if you want to go BIG a classic side dish for pot pie is french fries.

I don't like peas. Can I make this pot pie without peas?

You can do whatever you want with this pot pie! Add mushrooms (I mean, supergross, but you might like it), take away peas, use no top crust ... do whatever you want.  This is how I make it and how I like it best.  Use this as a guide.  But if you don't put peas in it people will think you're a weirdo. You know, normal people who like peas.

Because the pot pies have a good amount of gravy but aren't *too* saucy, the crust stays crisp. If you aren't going to cook them right away make sure you freeze the pot pies. If you just refrigerate them, they'll soak the pastry and could be soggy when you cook them.