Home » My Life » Does Your Mother Scare the Crap Out of You? Or Is That Just My Family?

Does Your Mother Scare the Crap Out of You? Or Is That Just My Family?

Mother’s Day is a time to celebrate those women who told us we were perfect, protected us from danger, and guided the way for us.  Soooooo, what about the ones who laughed maniacally while chasing us around the house with bugs? Or a box? 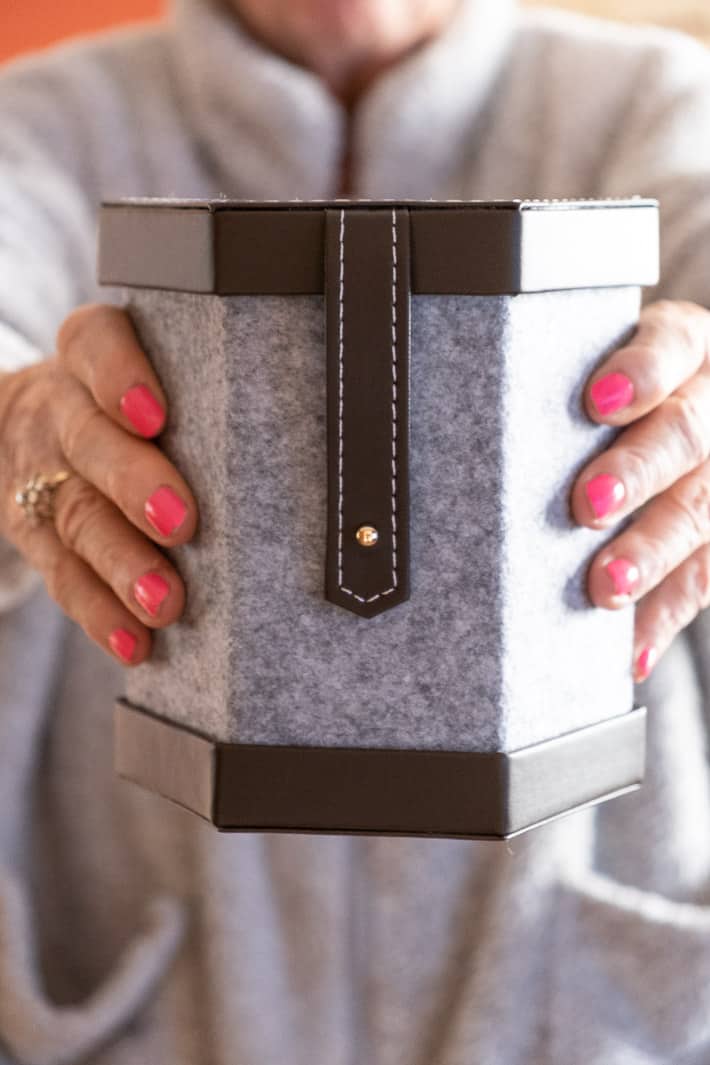 Gathered in my mother’s over the top living room were my sisters Pink Toolbelt, Fish Pedicure and myself. We were there to celebrate Mother’s Day. We all arrived at different times; me first, Pink Toolbelt second and Fish Pedicure last.

As I sat across from my mother Betty’s overstuffed, fringed floral sofa waiting for the others to show up, my mother slipped out of the room to grab something she wanted to show me.  Something she’d bought recently and was really excited about. The reaction from a normal daughter would be Great! Show me what it is.   But to be a normal daughter – you have to have been raised by a normal mother.

That was not my reaction.  My reaction was to jump up out of my chair to ensure I was in a fighting position for when she came back into the room. What the hell was I thinking showing up here without wearing a goalie mask?

When I was 5 or 6 years old we would go to visit my mother’s mother.  Her name was Doris.  Doris, my grandmother, was also not normal.  Instead of being greeted with a warm hug and kisses, I would be greeted with a knowing snicker and a sense of impending doom. My tiny veins would course with pounding blood, my vision blurred, waiting for whatever awful thing she had in store for me.

The more terrified I was, the happier she was.  She put plastic bed bugs in my bed, Whoopee cushions under my chair pad, wrapped dead mice up like presents … Unless I cried she didn’t consider it a successful visit.  It was always a successful visit.

I prepared myself in my mother’s living room for what was to come.  As a child my mother would chase me around the house with the broken off eyes of potatoes screaming that they were bugs, would walk into my room wearing elaborate and terrifying rubber masks at night, give all my date’s dribble glasses to use on their first visit and if you were to ask her what her favourite type of nuts were she’d tell you the kind in the can where a snake jumps out when you open them.

Betty loves to scare her daughters.  A lot.  And her grandchildren.  Anyone really if I’m being honest. It’s kind of her thing.  As you might have deduced, she gets it from her mother.

So when Betty rounded the corner from the kitchen I was ready. One foot planted firmly behind me, and one in front, the exact position I needed to either attack or flee. I wasn’t sure which I’d need to do yet so I kind of danced in between the two. She came closer and I could see that she was holding a box. HOLY SHITTTTTTT A BOXXXXXXX.

My reflexes kicked in instantly and I inadvertently fear-farted. I knew this was the moment to flee not fight.  I clumsily backed away bumping through furniture on my way to the dining room, never taking my eyes off of the box.

That familiar feeling started to overwhelm me; the dizziness , the cold sweats, the weak knees (and a new addition as I get older … the weak bladder). I could barely hear her hysterical laughing over the pounding blood rushing through my ears. As she got closer and closer to me with the box I knew there was no way out of it.

Like it or not, I was going to have to find out what was inside that box.

My money was on something that jumps, bites or died 10-12 years ago.

My mother walked towards me as I cowered in the corner, the unpleasant scent of my fear response the only thing coming between us.  She finally shoved the box towards my face, convulsing with laughter, and demanded that I open it.

Lord help me, I opened the box.

Inside the box were 6 neatly placed pair of eyeglasses and a bottle of lens cleaner. 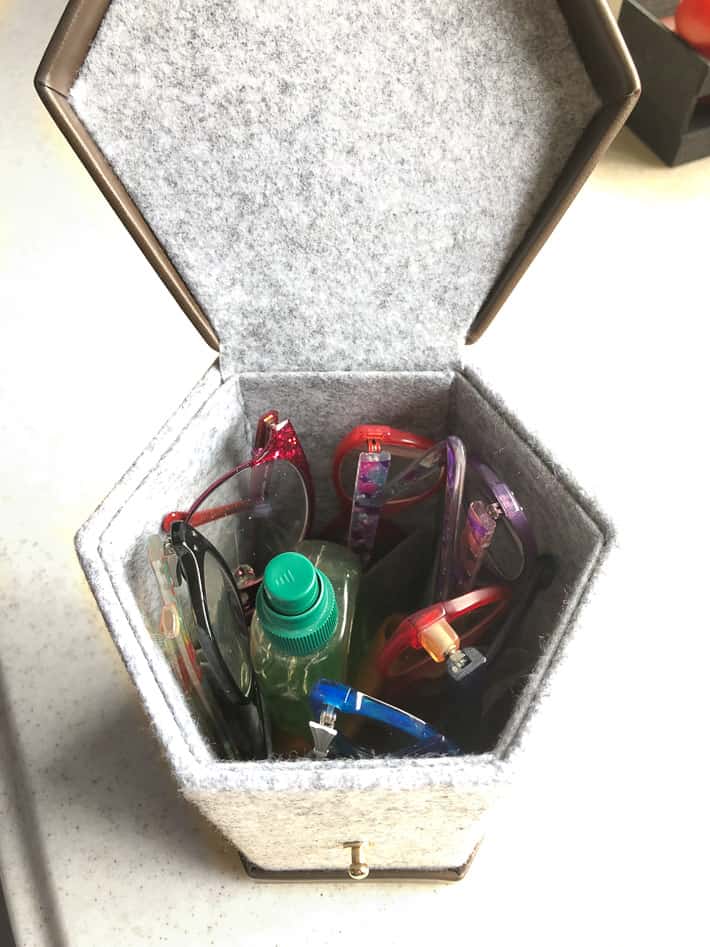 That’s it.  She’d seen the box at a fabric store and knew it would be perfect for storing her collection (she’s an addict) of eyeglasses.

By now my mother was laughing so hard she had to sit down. That’s part of the wonder of being a lunatic.  Everyone expects everything you do to be motivated by some sort of lunacy.  She knew the whole time that there was nothing scary in the box. But I didn’t. And that was the fun of it for her.

I made my way back to my chair, catching my breath and uttering a silent “you’re welcome” to all the kids I never birthed into this horror show of a family.

Moments later my sister Pink Toolbelt showed up and sat across from me in the living room. The minute her ass hit the chair, my mother declared “I have something to show you!” and shoved the box into my bewildered sister’s hands.  On cue, she stood up and yelled “NO, I’M SCARED, I DON’T WANT TO OPEN IT. I’M NOT OPENING THAT!!“.  And didn’t for about 5 minutes. She’d put her hand on the top to open it, then jerk it away laugh/crying until the urge to open it boiled up in her again.

She eventually did open it but not before crying, laughing, cursing my mother and asking me why I was backing away.  She found the glasses.

Enter sister #3, Fish Pedicure and the same scene repeating itself.  Presented with a box, some initial nervous laughter, the stink of stress sweat, a declaration of NO, I DO NOT WANT TO OPEN IT!  followed by eyeglasses, relief and laughter.

We spent a good chunk of the rest of the afternoon talking in more of a normal mother/daughter fashion. Fish Pedicure talked about how she had the best fake poo anyone has ever seen and wondered where it was, Pink Toolbelt got really upset talking about her very best fake vomit which she’d lost  and Betty basked in the daughters she’d raised.

While this was going on I took “the box” into the kitchen so I could take a quick picture of it for this post. (10 minutes into the visit I knew I’d be writing this post.)

I came back into the living room and set the box down on the coffee table in front of my mother who – you guessed it – immediately jumped up and started pointing at me violently with stabby motions.  What did you DO???  Why did you have that box?? What did you do to it?? YOU DID SOMETHING I KNOW YOU DID!

And that ended our Mother’s Day hellebration.

Nope. I wasn’t raised by your typical women. And because of that there isn’t a single thing in life I’m afraid to do.  Other than open a box.