I ATE A FROG THIS WEEKEND.

I woke up early Saturday morning on this, the first long weekend of the summer in Canada.  I had it all planned out with the regular long weekend things to look forward to like smoking some ribs, getting my plants in the ground and developing a flip flop callous between my first and second toes.

I’m gonna be perfectly honest with you right now, I had a surprisingly hard time looking forward to eating a frog.  Believe it or not , it’s something you really have to talk yourself into being excited about.  Like undergoing a horrifically painful hernia repair.  Or going to a baby shower.

But I did it, it’s done, and now I don’t have to think about eating that frog anymore. 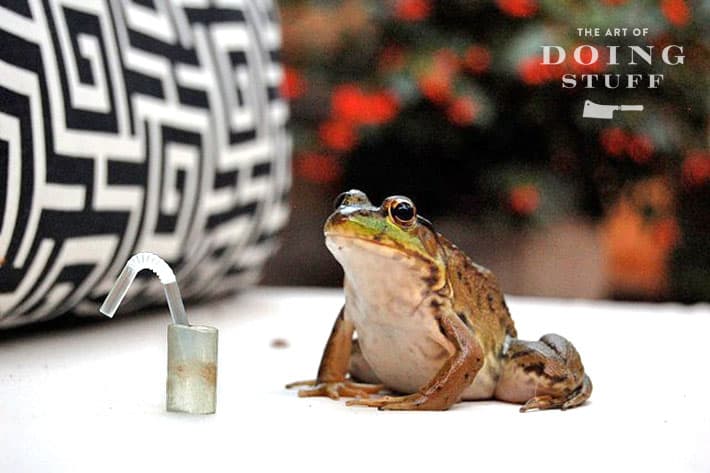 If you’re any sort of normal human being you’re wondering one of two things right now.  1)  Why the hell did you HAVE to eat a frog?  and 2) Where did you get the frog and how did you eat it and how can I get a frog and eat it?

The frog was in my backyard and I smoked it.

I’m sorry, I completely forgot to mention that “Eat the Frog” is just an expression for getting something done and over with as soon as you can.  It’s taken from Mark Twain

I’ve needed to build 2 gates to cover up my garbage cans in my backyard for years now.  It’s the thing I always dread doing for some reason and I put it off until it’s close enough to the end of the summer that I can justify not doing it because soon it’ll be winter and I won’t be in the backyard anyway.

This method of avoidance has served me well and I’ve managed to not build gates for at least 5 years now.

But here’s the funny part.  I maybe haven’t built gates for 5 years but I haven’t stopped THINKING about building gates.  It is constantly on my mind, sometimes right there in the forefront and other times, hidden in the back just behind the spot in my brain where I keep the memorized recipes I don’t cook anymore.

Thinking about building gates has consumed more of my time and energy than actually building gates ever would.  That’s the big mistake we all make with large projects. We put them off, because we don’t want to do them, but by putting them off we’re keeping them hovering over our lives like a black cloud raining down frog guilt on us for months or sometimes years.

There is no worse rain than frog rain.

So how did I finally Eat the Frog?

I did 3 things that are essential for completing any project.

That’s it.  Do those 3 things and your chances of getting any big (or small) project done are increased by 3 trillion percent.  That’s a scientific fact based on a mathematical algorithm pie chart graph fortune teller.

So the next time you look at a big project and think “UCH … how in the world am I going to ever get this done?????”, just remember my 3 steps.  Buy materials, outline your steps, do it as soon as possible, eat the frog.  I’m sure you’ve kissed a few, and I can tell you from experience that eating one is far more palatable.