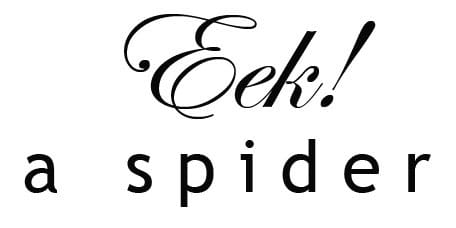 First things first.  I’m afraid of spiders, I don’t like spiders, spiders are the devil.  Big, fake spiders however, don’t bother me none.  Until last year while going through the checkout at my local Dollarama, I had no idea how lucky I was to have the bravery in me to be able to face a fake spider.

The dollar store I shop at employs a woman who is deathly afraid of spiders.  All spiders.  Even giant, obviously fake, styrofoam,  made in China spiders.  Which makes her job as the cashier at Dollarama a bit of a struggle from August until October when they get all their Halloween decorations in. At least 2  out of 5 people in line for the entire month of October are buying fake spiders of some sort.

She’s so terrified of the fake spiders she can’t even touch them.  If you take it upon yourself to buy spiders and go through her cash, you’re gonna be bagging those spiders yourself.  Depending on her mood that day she might not even be able to look at them and you just have to shove them in a bag and let her know how many you put in there.

Just so you know … as it turns out, she can distinguish the difference between the sound of a spider and the sound of a bag of chips so don’t try to fake her out.  It’ll make her angry and no matter how frightened and  innocent looking she is, you don’t wanna see a small Filipino woman in the throes of spider terror go ape-shit on you.  It’s not a pretty site.  It involves saliva.

So, the point of all this is go out and buy some spiders.  Big, small … doesn’t matter.  The other thing you need is some string, fishing line, or what I’ve used here … that fake spider web stuff you get in a bag.  Just pull a long string of it until it’s thin and tie it to a few of the spider’s legs.  Fasten the other end to a chandelier or the ceiling so it’s dangling down.

Then … just for fun … invite your local Dollarama cashier over for a visit and get ready for a real spit-show.