Eggs in a Basket 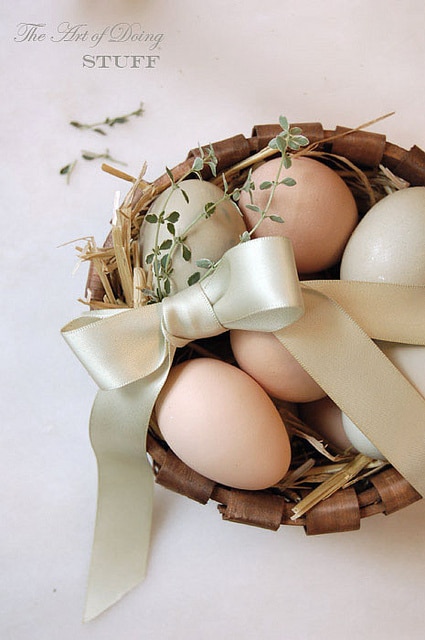 Yup. Eggs in a basket. I’m feeling quite literal today.

When I first got my chickens, before they even sprouted real feathers, I knew once they started laying eggs I was going to present each of my neighbours and family members with a beautiful basket of eggs. Something that would say “Thank you for being such a good neighbour. Thank you for being my friend.  Thank you for not ratting to the cops about the coop full of livestock in my backyard which may or not be legal.”

I don’t really have anything to be worried about.  Most of my neighbours have one thing or another that they’re doing that’s illegal.  There’s the recording studio across the street, the addition built too close to my property line  and of course there’s the house built entirely out of human bones.  So if anyone were to rat on me, I could just rat back.

Even so.  I figured it was  probably best to keeping the peace over my illegal ranching with some eggs,  a wicker basket and a bow.  Like Mahatma Martha with a little Clint Eastwood thrown in for good measure.  A goodwill badass basically.

Then a few weeks ago I happened to mention to one of my neighbours that I was getting eggs now and had scrambled eggs that morning with them.  She hugged her toddler closer to her thigh, made a squinchy face and said something that was very close to “ick”.  So scratch  her off the list.

I told my mother the story and she made a barfing sound.  Like blechhhhh, only with more gurgles.  I thought this indicated she thought my neighbour was disgusting. As it turns out, she thinks my eggs are disgusting.  She’s grossed out by them too.  This is a woman who doesn’t think food has gone bad until it starts to talk back to her.

Then my sister, the one who helped me build the coop also dissed me and my eggs.  I gave her a basket like the one you see here for helping me with the chicken coop.  She LOVED the presentation.  She gushed over how great the eggs looked and the little sprig of thyme, but when I asked her a few days later how the eggs tasted there was a long pause and then she mumbled something inaudible.  Huh?  What was that?   She fed them to unsuspecting children.

Back up the Zoloft truck, yet another person who has backyardeggophobia. 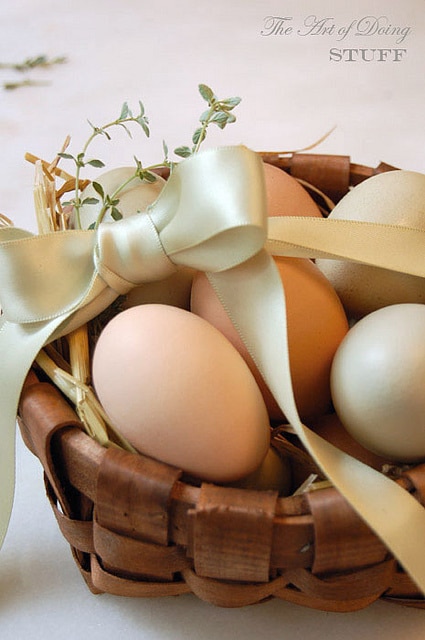 There are plenty of other neighbours who have specifically asked if they could try the eggs.  They’re excited about them. And even the fella, who was a bit leery of the eggs at first now eats them almost every day.

But a LOT of people have the same reaction as my family and neighbour.

They’re weirded out by an egg that doesn’t come from the cooler in a grocery store.

So out of curiosity … does the thought of eating these eggs gross you out? 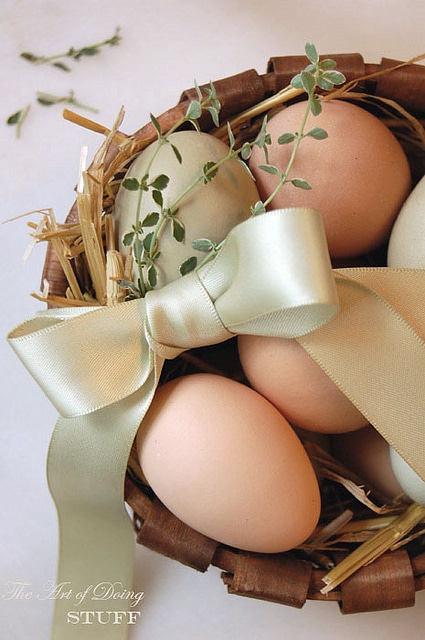 Don’t worry about offending me with your answer.  Chances are I wasn’t going to send you eggs anyway.  Plus, if you’re not offended by my Frozen Yogourt Tampon post, how could I be offended by your honest opinion on eggs?