Home » Tips » Fixing » EXACTLY HOW MUCH MONEY YOU FLUSH DOWN THE TOILET EVERY YEAR.

EXACTLY HOW MUCH MONEY YOU FLUSH DOWN THE TOILET EVERY YEAR.

Let’s all just take a moment to contemplate the thousands of dollars we’ve flushed down the toilet.

According to some study by someone I don’t remember on the Internet, the average person uses 20,805 sheets of toilet paper in  one year.   If you assume toilet paper rolls have on average, 500 sheets (some more, some less), that means each person uses 50 rolls of toilet paper a year.  I’ve rounded up there a bit to allow for things like killing centipedes, blowing noses and cleaning the sink when you can’t be bothered to get a cloth.

If you pay full price for premium toilet paper the cost is around $8 for 6 rolls of toilet paper.  So a low average estimate is that each individual person in a household consumes $66 worth of toilet paper a year.

That’s $5,500 every 20 years on toilet paper.  Not accounting for inflation of course.  Right. Down. The toilet.  And if you buy the WRONG TOILET PAPER you might end up spending a lot more money than that.

The past decade or so has seen a lot of changes in terms of our bathrooms.  Low flush toilets, combined with the creation of premium, super-strong, it could double as a winter blanket,  toilet paper in 1999 has brewed up the perfect sewage storm.

Toilet’s don’t use as much water to flush as they used to.  And toilet paper is now much stronger than it used to be.  It was assumed 17 years ago that we all needed much stronger toilet paper for some reason.  Regular toilet paper was not enough.  We needed something tougher, thicker, stronger.  Something you could use as toilet paper/mountain climbing rope.  This means … sewer line trouble.

Which I’ve had.  About 7 times in the past 3 years.  I’ve had sewer lines replaced, lines flushed, cameras sent down to take a look, more lines replaced and a backwater valve installed.  All in an attempt to stop my sewer line from getting clogged.

I know my sewer guy by name. Roger. I know how he takes his coffee.  Double Double.  THAT is how often I’ve had problems with my sewer lines in the past 3 years.

So I am now very, very careful with my sewer lines.

I only use toilet paper that completely dissolves so there’s almost no chance of it clogging.

And I replaced my toilet.

I just replaced my toilet 3 years ago. BUT, I did not  buy a good toilet. 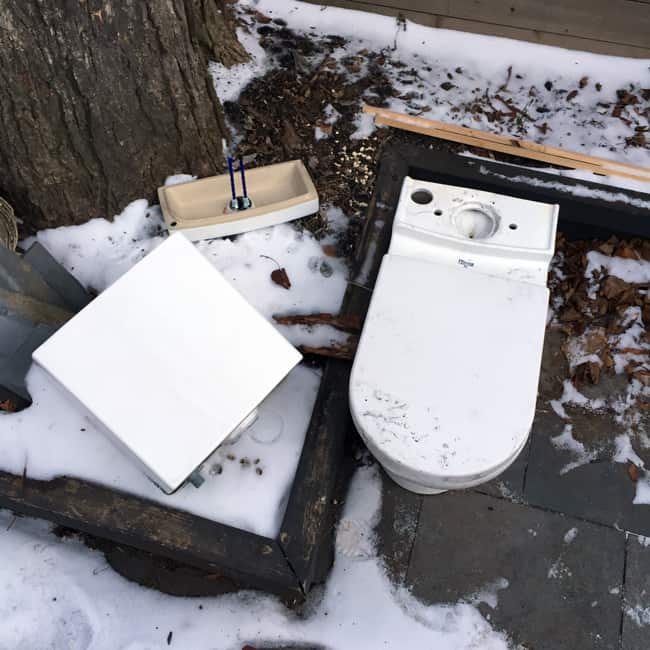 I bought a good looking toilet.

A good looking toilet that couldn’t flush a bug.

When I got the offending toilet (A Pfister by the way) I even called the company and said, Hey.  This toilet doesn’t seem to work very well. I think it’s defective.  The bowl doesn’t fill up with enough water and it doesn’t totally flush and it just doesn’t seem very good.  I was told that’s the way these low flush toilets work.

Huh.  So what makes these new low flow toilets different than older toilets is that … they don’t actually work?

It didn’t make much sense, but the toilet I had before was an ancient water glugging toilet that could suck your spleen out if you flushed it before standing up.  So maybe they were right. I just wasn’t used to the more new age, lackadaisical approach low flow toilets had to flushing stuff away.

So I started to do what everyone who has a bad toilet does.  I’d stand in front of the toilet, wait for it to complete its flush; and then I’d flush it again.

But I persisted with my low flush toilet because it’s better for the environment because it uses so much less water.  It’s also the only type of toilet you can buy anymore.

I’m just a toilet water layman and certainly not an expert in mathematical toilet flushing formulas, but this whole having to flush twice, sometimes three times method didn’t seem to be saving Mother Earth much water.

Also when people came to visit unannounced on more than one occasion I threw a pie in their face as a way of sedating them for a few moments while I ran into the bathroom to make sure the last time I used it I double flushed.

So on January 22nd I bought a new toilet and on January 23rd I installed it.  (this is the toilet that I bought and LOVE) And I filmed the whole process.

On Monday I’m going to have a STEP BY STEP GUIDE TO INSTALLING A TOILET.  I’ll show you exactly how easy it is to install a toilet BY YOURSELF and prove to you that NOT all low flow toilets are created equal.  In fact, some of them actually have that impressive spleen removing flush.

How long does swapping out your old toilet for a new one take?  As little as an hour or two.