Home » Chickens » Keeping Chickens » Field Trip to a Farm! A peek at a henhouse.

Field Trip to a Farm!
A peek at a henhouse.

I took a field trip to a farm last week to check out what a real,  honest to goodness henhouse looks like.  ‘Cause I have to build one and all.  Ack.  In the next … 2 weeks.  Double ack.  I really need to build that thing.  Or at least think of building that thing.

So I went to my old family doctor’s farm.  Yup.  I had a farmer doctor growing up.  He would talk about how the cows were doing while looking up  your nose.

Dr. Richardson delivered me,  he gave me penicillin when I was sick and prescribed my very first round of birth control pills which I needed for “cramps”.   Yup.  He’s a good guy that Dr. R.

Dr. Richardson, who is now retired, was a family practitioner, but he was always a farmer at heart.  In the words of Lady Gaga,  I think you’re born that way.   And frankly, there isn’t much you can do about it.     If you’re a farm lover at heart and you happen to live in the city, life can be pretty miserable for you.

It would be like Chaz Bono being trapped in Chastity’s body.  Only it’s easier to tell your parents you’re buying a farm than having your boobs cut off.

I’m a farmer at heart.  I’m Laura Ingalls at heart.  I love the city and all the sparkle of it, but if given the choice I’d muck out a stall before I stood in line to see what the latest designer has to offer at H&M.  O.K., maybe that’s not true.  They have some astonishingly good guest designers at H&M.

Bad example.  But you get the point.

Farm living is the life for me.   Only problem?  I don’t live on a farm.  Yup.  I’m Chaz Bono.  I have 9 fish, a couple of cats, 5 chickens and 2 frogs.   I figure if I can somehow add a goat to the mix I’ll officially have created my own downtown Green Acres.  Plus it’ll have the added bonus of changing my nickname from “The Crazy Cat Lady on the Corner“, to just plain Crazy.  It’s more succinct.  I like it.

So back to the farm.  I took a trip up to Dr. Richardson’s farm last Wednesday  to check out his chickens.  If it were up to me I’d still be there.  But he kicked me out. 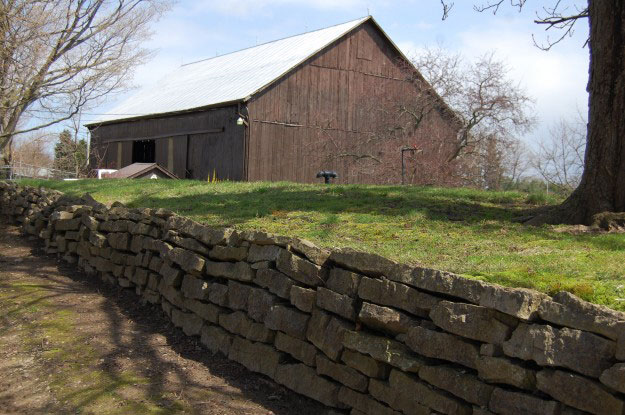 The cats and the Clydesdales. 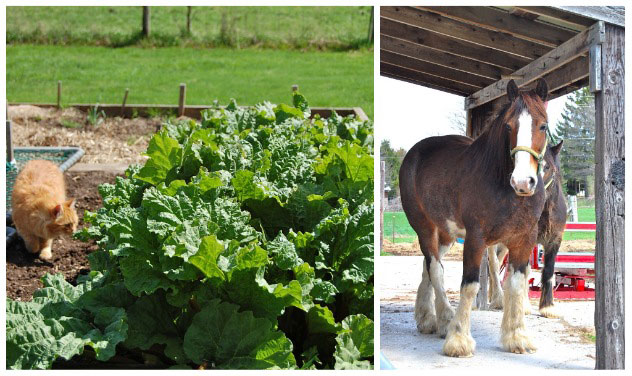 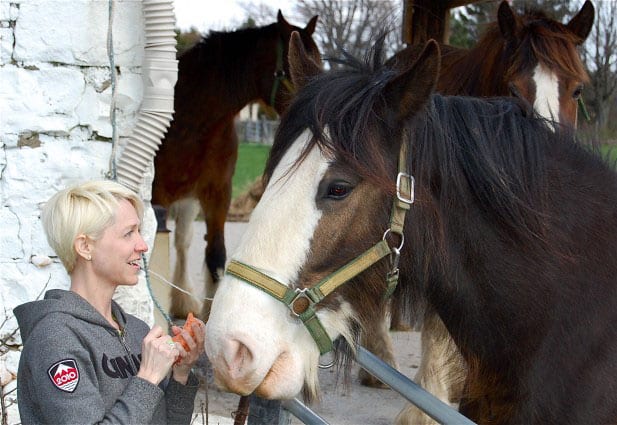 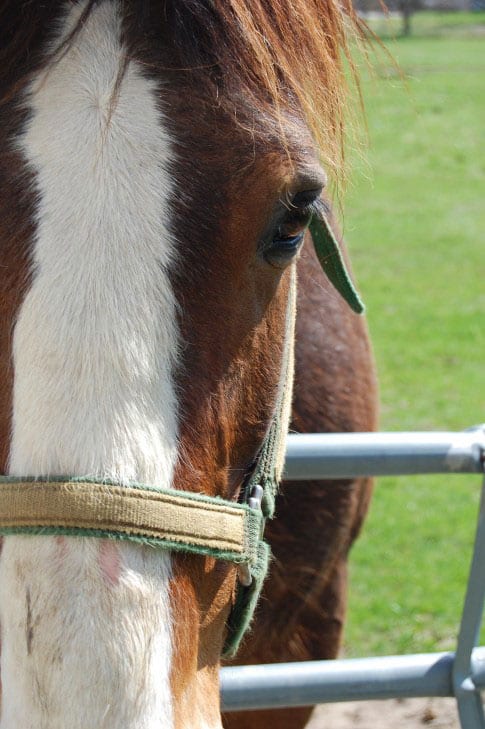 Honestly, this is the most perfect barn ever.  Dr. Richardson holds dances and fundraisers in there with bands and pies and everything.  There’s twinkle lights strung around the whole place and it’s breathtaking.  If you’re into barns that is.  The posts holding up the barn,  which are older than the barn itself are all hand hewn. (that’s part of one of the posts in the below right picture) 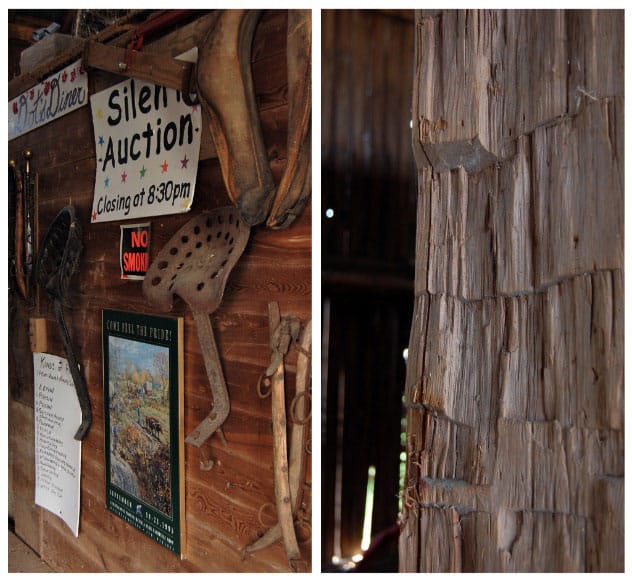 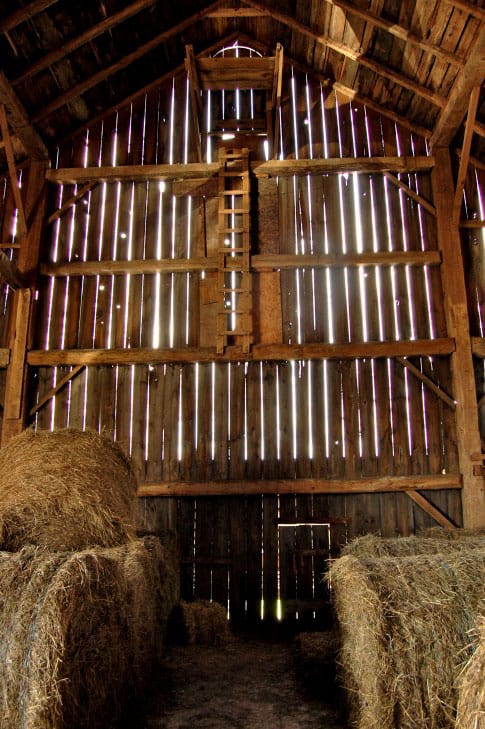 Of course the point of this whole trip was to take a look at the chicken coop to see if I could get any pointers.  Pointer #1 was to built this cage type thing if I can.  The chickens roost on top of it, and all their poop falls below into an area that they can’t get into.  It makes for a clean coop and a clean chicken.  Chickens generally poop a lot when they’re asleep, you see.  Not unlike a really drunk person.

I love the metal feed buckets on chains so they can be lowered. Dr. Richardson’s chicken coop used to house a bull so it’s fairly large.  A lot larger than mine is ever going to be so there only a few ideas I’ll actually be able to use in my own coop.  The one I’m thinking about thinking about planning.   But I did find out some crucial information on the trip.

For instance, chickens don’t need a whole lot of heat.  I was terrified mine were going to freeze in the winter but he assures me they won’t.  Also, while Dr. Richardson spent days building a row of regulation sized nesting boxes (elevated boxes that hens lay their eggs in), day after day the hens kept laying eggs exactly where they wanted to;  in some old box stuck in the corner of the coop.  So the nesting box now sits empty, while the old wooden box is filled every day with eggs.   And as you can see the occasional egg escapes into the poop pile. Best to leave those there I would imagine.  Unless you plan on throwing them at someone’s house of course. 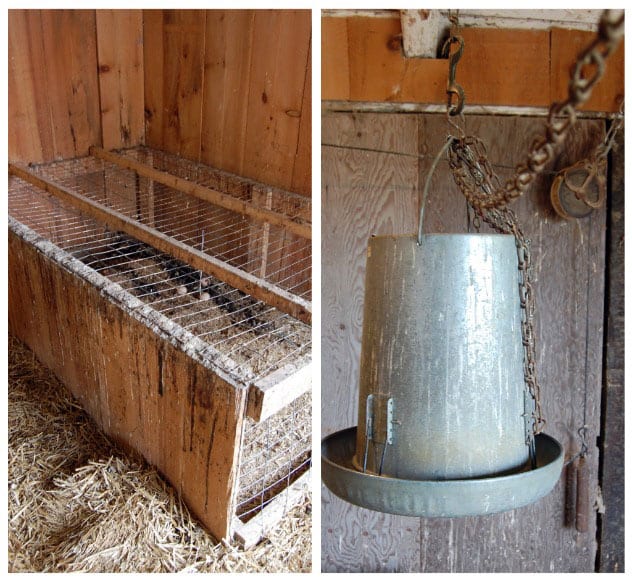 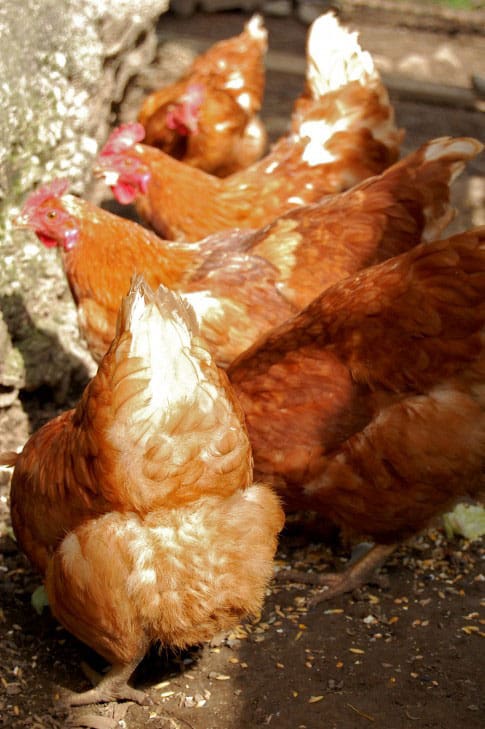 Because I was the guest of honour that day at the farm, I was allowed to take home the day’s eggs.  You ever get so excited you think you’re going to cry and pee all at the same time?  No?  Me either.  By the way, if anyone finds my upper lip, have it delivered to me as soon as possible, please. 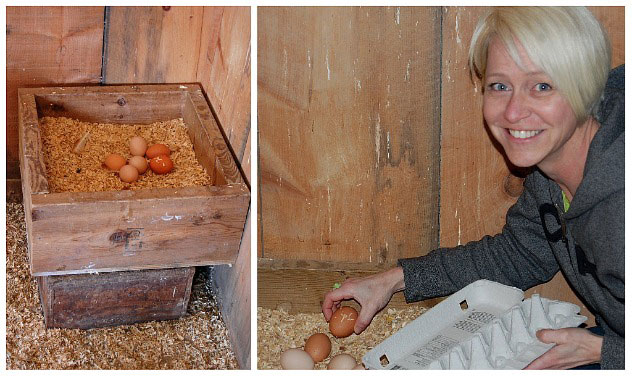 Without a doubt the very best part of the field trip was this thing.  An egg scale, which I measured my eggs on.  All extra-large, thank you very much.  I am OBSESSED with this egg scale.  How couldn’t I be?

If you’re not obsessed with it I’m pretty sure we can’t be friends anymore.  I’m also pretty sure something’s wrong in your head and you probably spend most days wearing a helmet and licking brightly coloured nail polish off the wand like a popsicle. 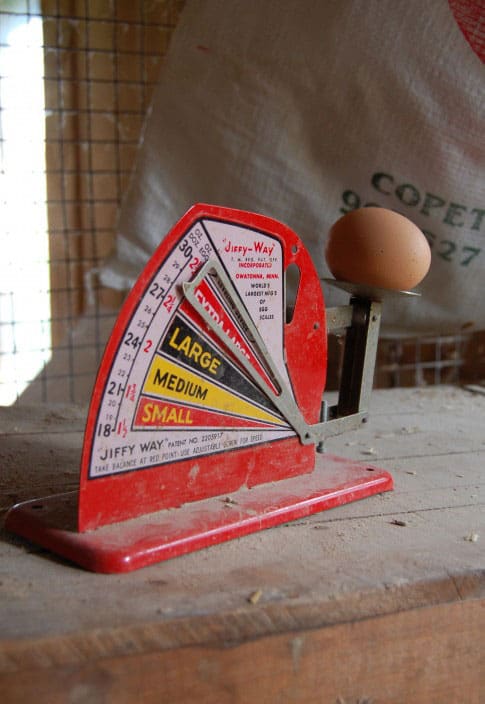 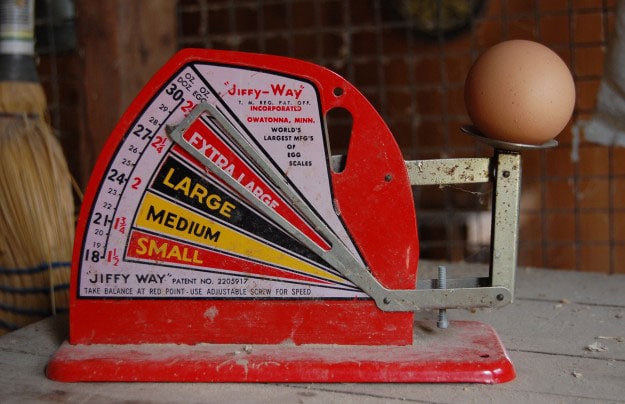 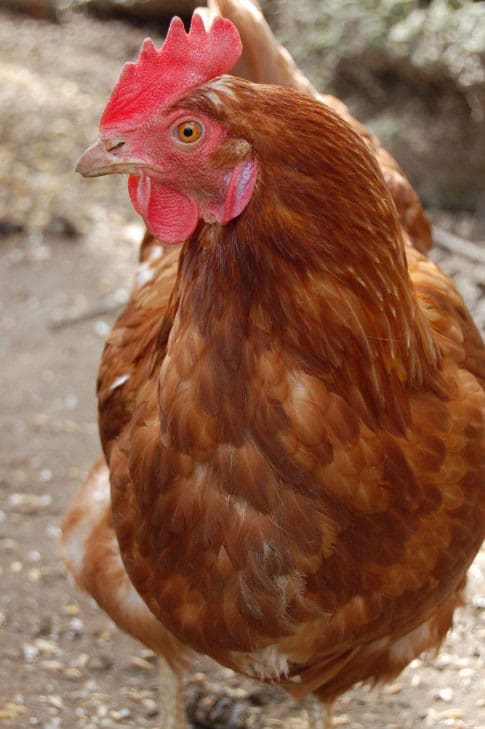 After a couple of hours (I refused to leave)  I finally made my way down the driveway where I got a quick glimpse of the bees Dr. Richardson’s wife keeps.  They’re all in those boxes.  She’s an award winning honey maker.  I know.  The perfectness never ends.  (hence my refusing to leave) 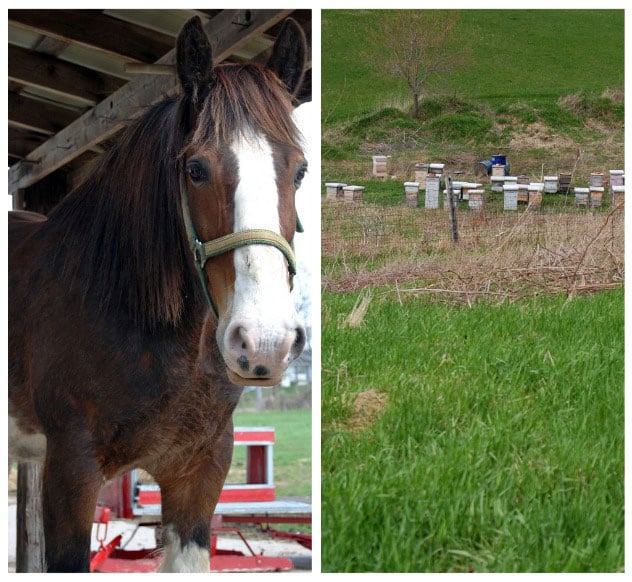 And our tour guide through it all … Dr. Richardson.   The family farmer/doctor. 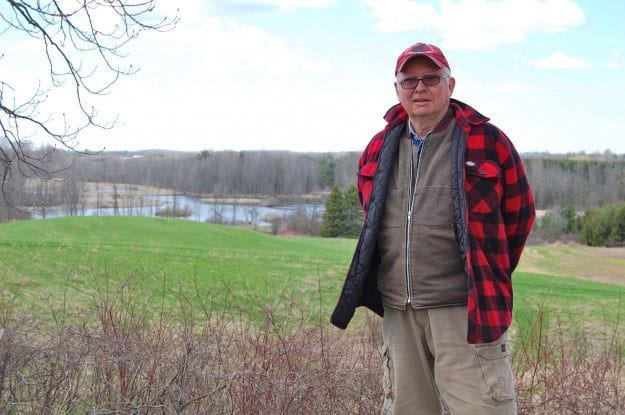 I finally left the farm after some kicking and screaming … 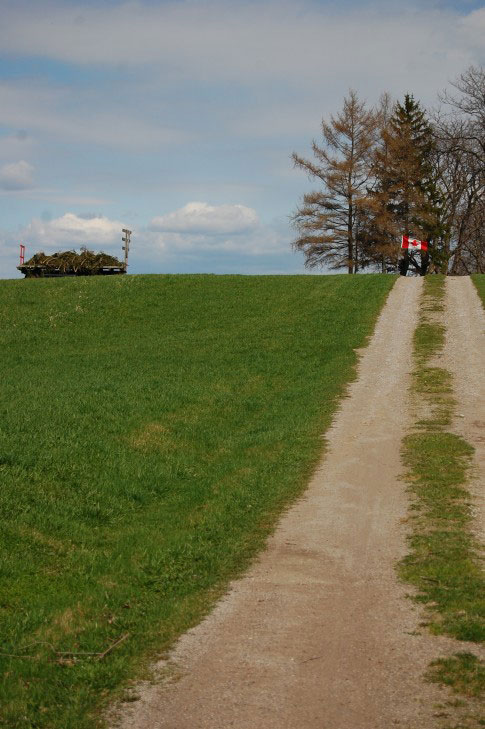 With these under my arm and a plan in my head.  Later that night … 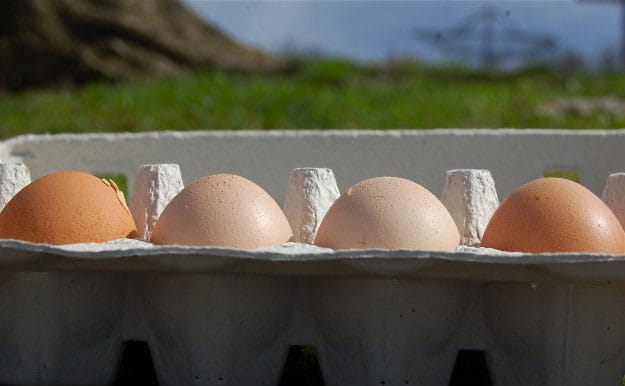 Cheese Souffle.  Courtesy of Dr. R., the farm and the chickens. 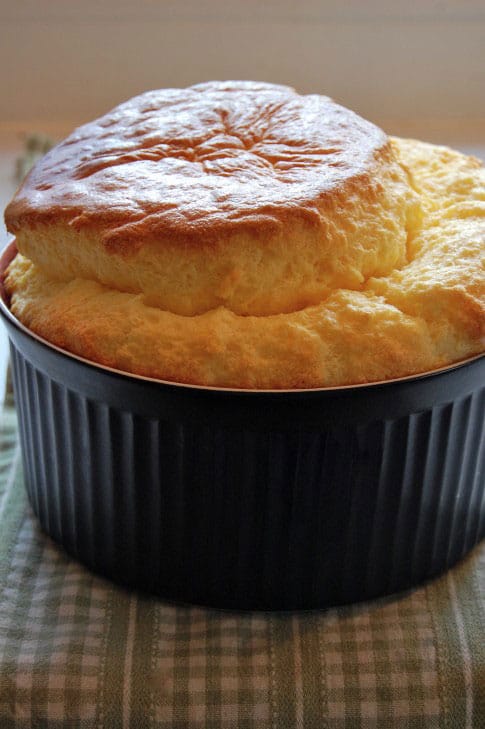 If you’d like to see more of Dr. R.’s perfect farm life you can take a look at it here on Christie View Farm.

In the meantime, I have a coop to build.  I mean plan.  I mean think about planning to build.