It’s not done, but it’s more done than it was a couple of weeks ago.  For days on end I woke up, went to the garden, dug dirt, then went home.  Occasionally I bathed. 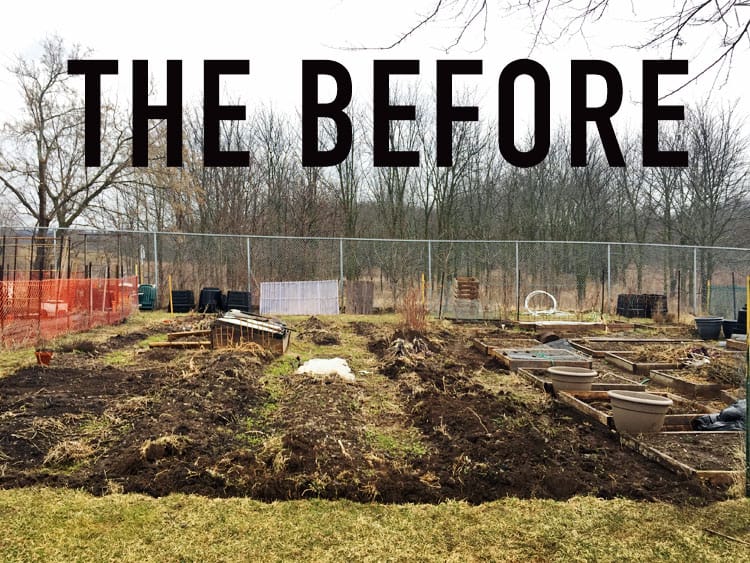 The community garden I’m a part of has a very special place in my heart because I started gardening there 2 weeks after my spouse of 11 years walked out the door, never to return, (except to come back for all his work boots).  Weird.  He should have known they weren’t at home since I sent him a live video of me winging them out of the back of my trunk into the local dump.

I had planned on planting a bunch of tomatoes in my sister’s large backyard that year but we realized she wasn’t going to have room for the 20 or so plants I had.  Not only was I going to be boyfriendless in 2013, I was going to be something even more devastating.  I was going to be tomatoless.  That would never do.

So a few days after the fella left, when I still couldn’t see straight, when each passing day seemed to contain way more seconds, minutes and hours than possible, I walked through the gate of my local community garden.  I was recognized (as the very famous medium sized blogger that I am) right away by a woman at the garden who has come to be my friend. One of the many friends I’ve made over my years there.  She helped me find a place for my tomatoes, allowed me into their community and I’ve been entertaining them with the insanity that is me ever since.

That garden is what got me through the breakup relatively unscathed. It gave me something to do, something to focus on and as anyone who loves gardening knows, it gave me a few hours of dirt meditation every day.  Hours where I didn’t think of what I was going to do, how I was going to pay my mortgage or if I’d ever have someone to make memories with again.

So thank you garden.  I love and appreciate you.  But this year you were a real f*cker. 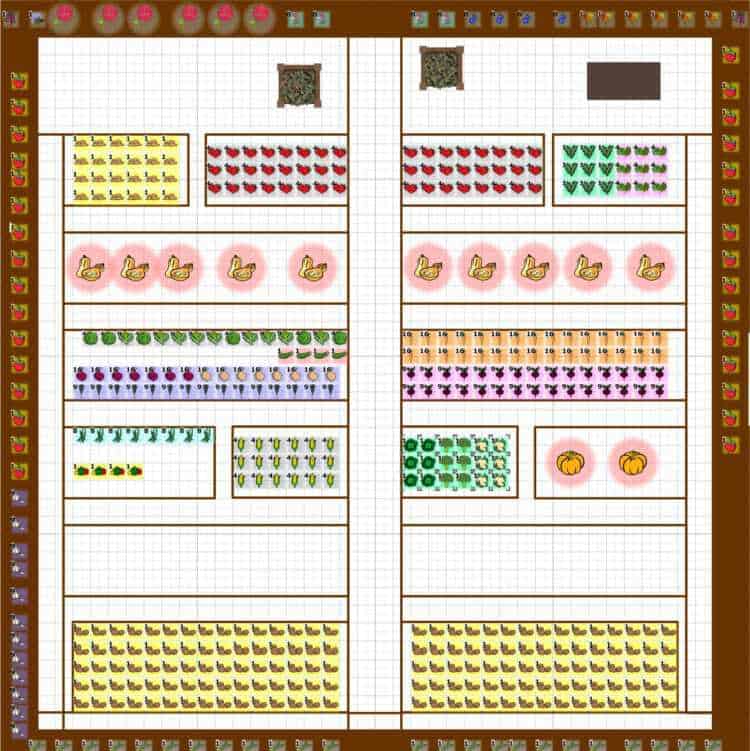 I had to somehow make 2 unlevel side by side plots work and I had to do it in the span of a couple of weeks.  Those weeks have come and gone and it still isn’t done but at least I’m at the point that I can start planting.

I had originally configured a completely elaborate gardening plan with focal points, arches and underground french watering channels.  Then I snapped out of it, scrapped that plan and realized I’m super and I’m a human but I’m not superhuman.  I simplified everything, made a basic, old fashioned layout and started digging. 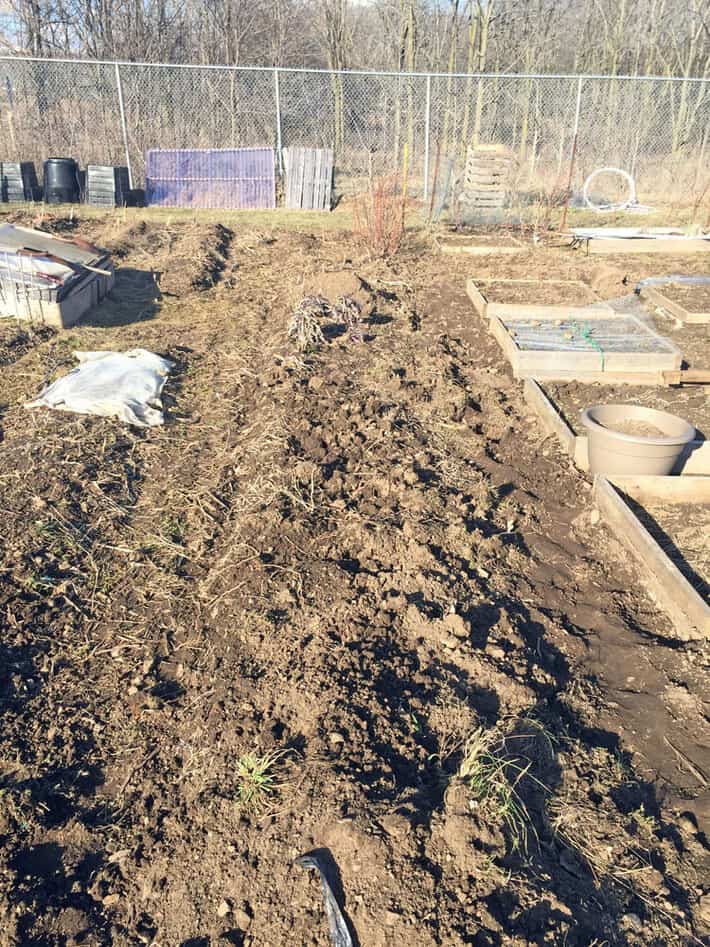 Here’s a breakdown of past few years at my community garden.  The first year I rented half of a plot from someone so I could just plant my paste tomatoes for making tomato sauce at the end of the year.  I managed to mash in a couple of squash plants as well. So I was gardening in a 20 X 10 foot area and was perfectly happy with it.

The next year an entire plot became available in the garden so I moved and set up shop in a different plot.  The year after that another plot in a location I liked better came up and I moved to THAT plot and built my raised bed garden in it.  The following year the original plot I was in with my tomatoes came up and I got that plot in addition to my raised bed plot.  At this point I’ve therefore graduated from a 10′ x 20′ plot, to two 20′ x 40′ plots.  But they weren’t next to each other.  Which lands us in January of this year when I found out the plot next to my raised bed plot was coming available.  Are you getting confused?  That’s O.K.  We’re almost at the end of my saga. 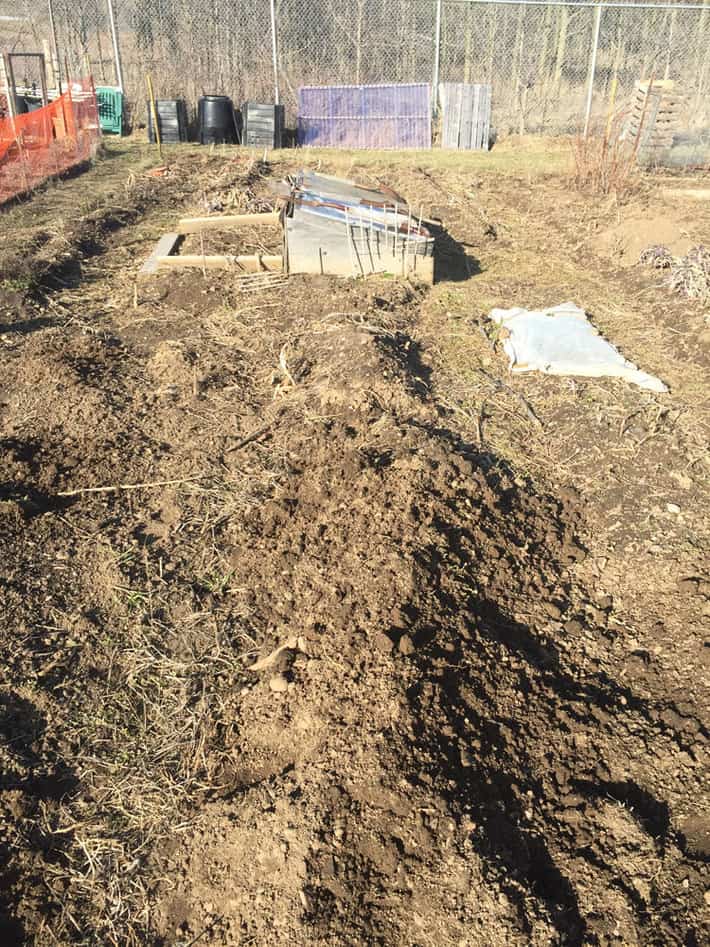 This is how my new plot (which sits to the left of my old plot) looked when I started.  It may look like a mess but it’s actually a great plot with great soil.  The guy who had it before me created raised rows that he amended with compost and manure, plus he planted green crops for green manure in between all the rows.  It just about killed me to have to level it out, but level it out I did.

THIS is my raised bed garden which I ended up disassembling completely to make my new plan work.  No more wood on the raised beds for me. Not for this year anyway.  I’m using all the wood from my raised beds to create a perimeter around my new double garden.  I’m still doing raised beds, they just won’t have raised sides.  It’s too much money and too much work for this year.

The process of combining these two unlevel plots had me pondering two directions.  Either leave the left garden as it was, slightly raised and terrace it down to my lower plot.  Or level them both out.  I figured I’d just start digging and see where the soil took me. 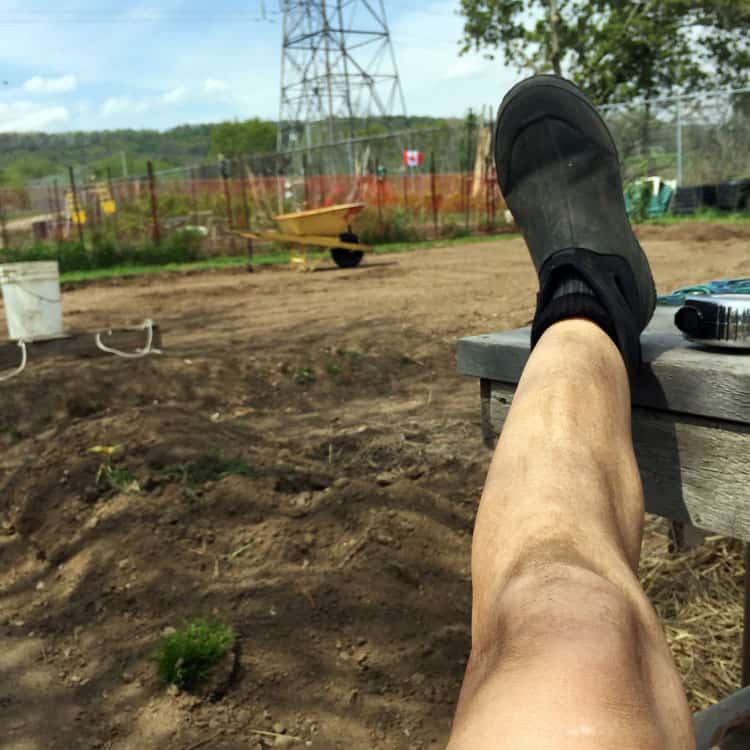 The first thing I had to do no matter what was level out the new plot.  That involved lugging a few wheelbarrows of dirt to some low points on the land and then using this old fashioned, tried and true method:  dragging a wood pallet behind me like a donkey.

If you have a lot of land to level there is NO better way than dragging a pallet.  Unweighted it simply levels the ground, if you put a couple of buckets of rocks on it, you can actually drag huge amounts of soil to different spots in the garden.

I did this for 2 solid days. 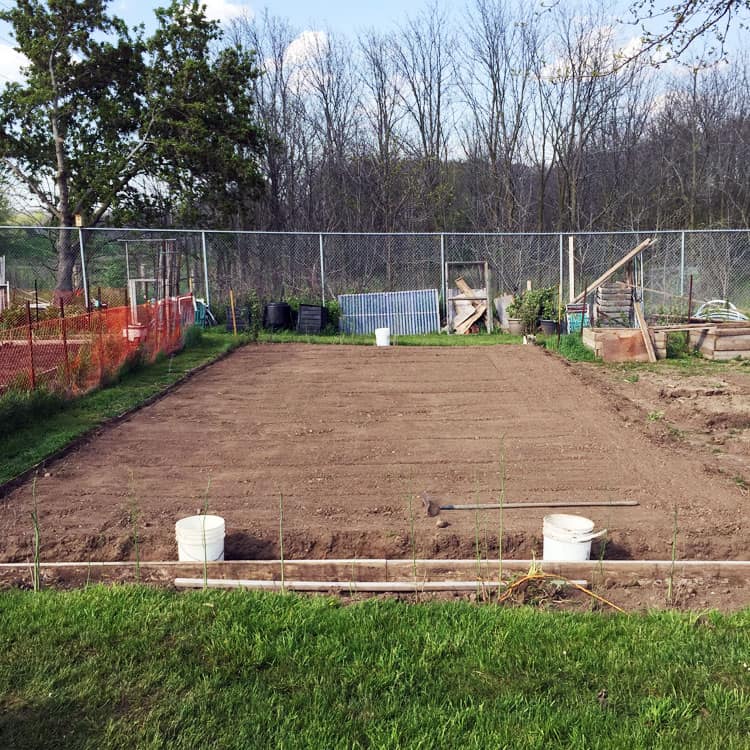 The end result.  The end result was also a stomach bulging with newly formed muscles that’ll turn back into non muscles in about a week.  I was excited, thrilled, filled with the overbrimming sense of accomplishment one normally only gets after cleaning out the fridge crisper.

Then I looked to my right. 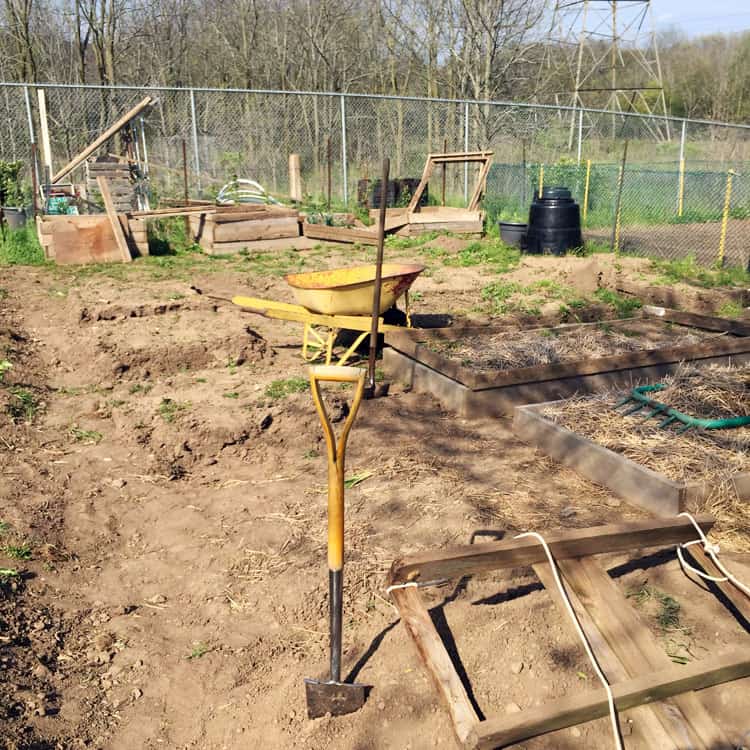 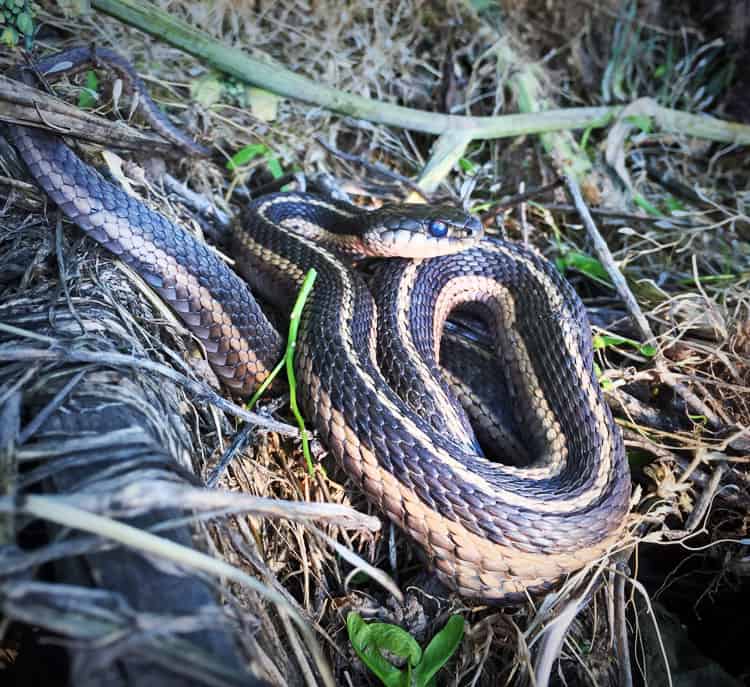 For the next few days I hung out with my friends the snakes while I transferred soil from the left half of my garden to the right.  It was at this point that I realized making both plots level was going to be the easier of my two options.  I just had to dig down on the left side garden to make my beds and transfer all of that soil to the right side of my garden to build it up.  Easy. 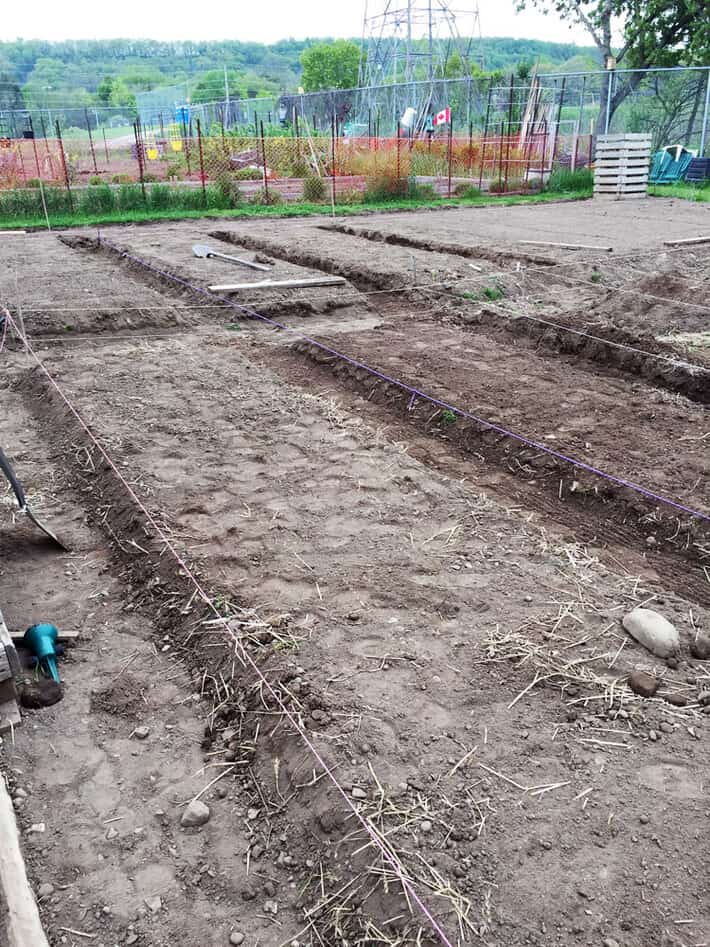 It was around this point, on day 6,  that I cried.  Just a little.  Then I remembered my epic stomach muscles that I’d be the proud owner of for the next week or two and I stopped crying long enough to take a picture of them and send them to my niece.  Then I noticed that after burning 37,000 calories a day and buliding washboard stomach muscles I still had my blobs of back fat.  And I started crying again.

It was a very emotional time. 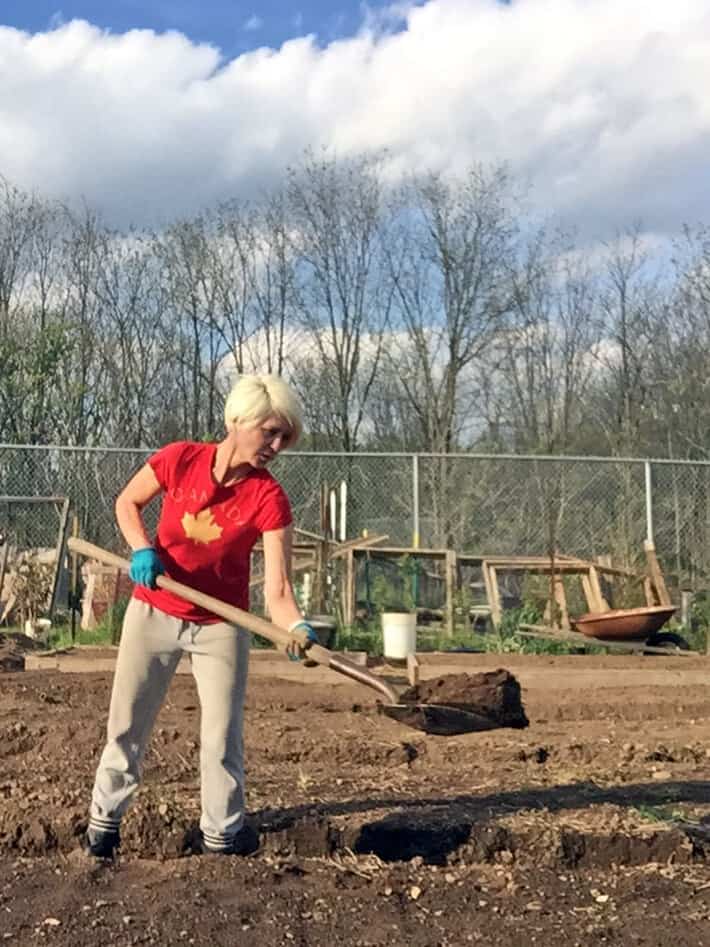 That’s me. That’s my shovel. That’s the prettiest I looked the entire time.  Proof of that coming up. 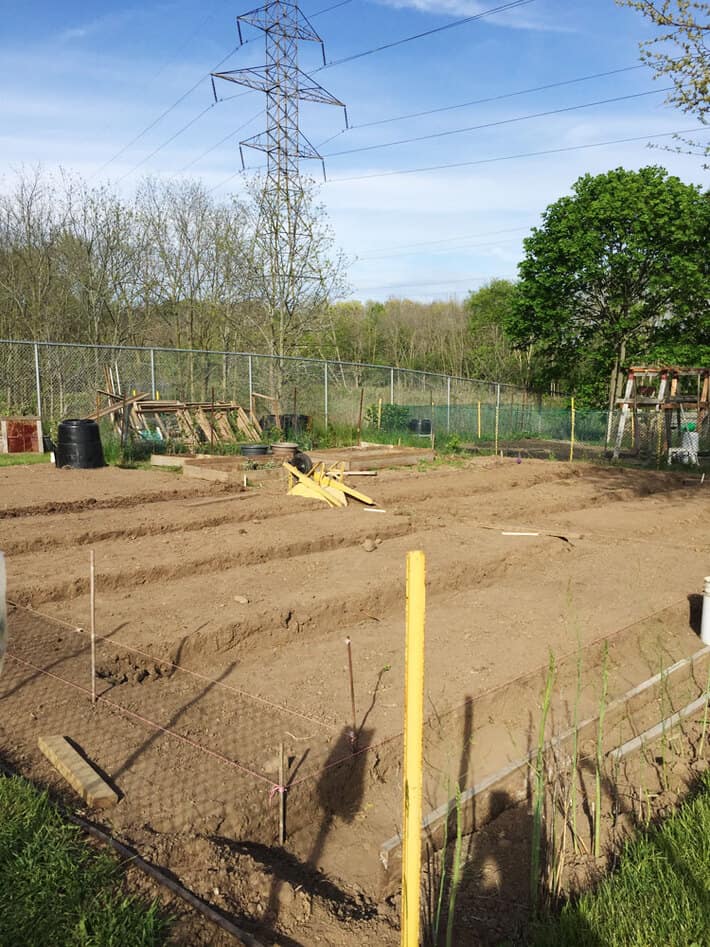 By this point in the whole situation I’d lost count of how many days I’d been doing this, why I was doing it and if it was normal to repeatedly punch yourself in the head at night from sleep shovelling.  A friend at the garden saw I was perhaps a bit overwhelmed and dug at least 4 of those trenches for me.  Had he not, instead of writing this blog post, I would most definitely have just buried myself in one of my trenches and called it a good life while sadly humming Amazing Grace to myself as a raccoon ate my face. 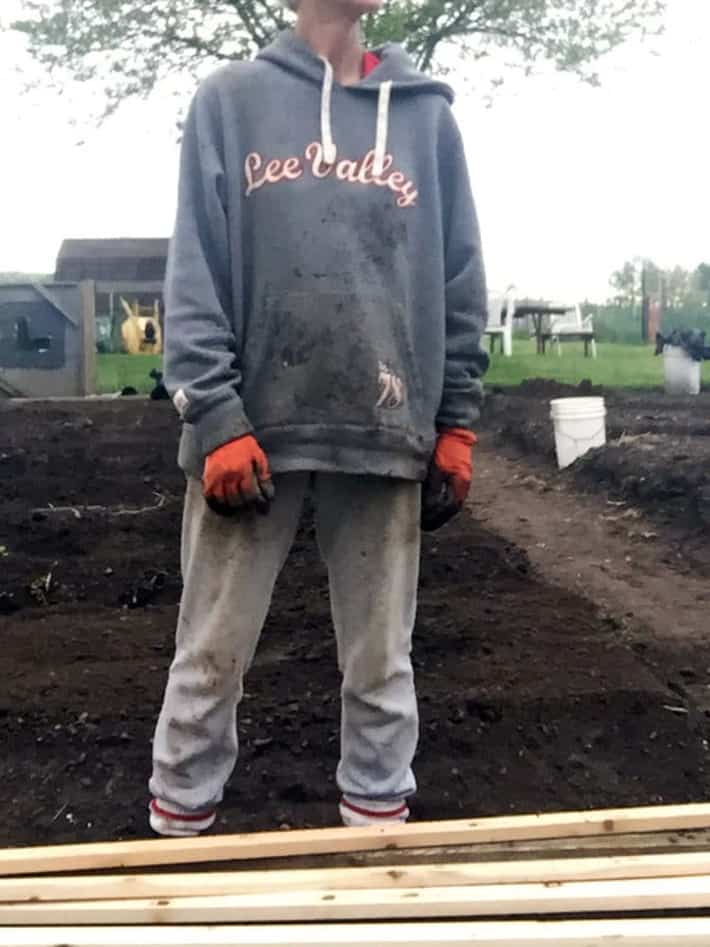 There are people up at my garden who can be there the whole day and still look like they’d be able to go out for dinner straight from the garden.  With the Queen.  I became this mess after 4.5 seconds in my plot. I gardened from morning until night. 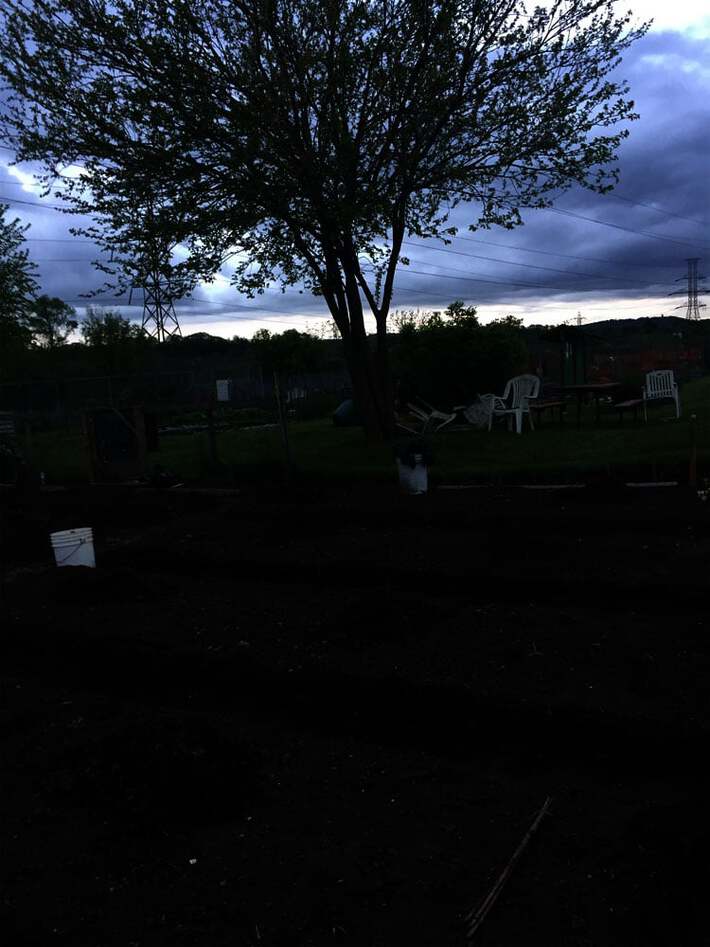 Are you bored yet?  Because I was by the point.  I was also delirious and as I would later discover, hypoglycaemic.  My friend Serena spotted it and gave me juice.  And part of a chicken carcass.  And some salad, which I ate off of the lid of the salad container, because I forgot about how Survivor taught me you can fold a leaf and use it as a spoon. 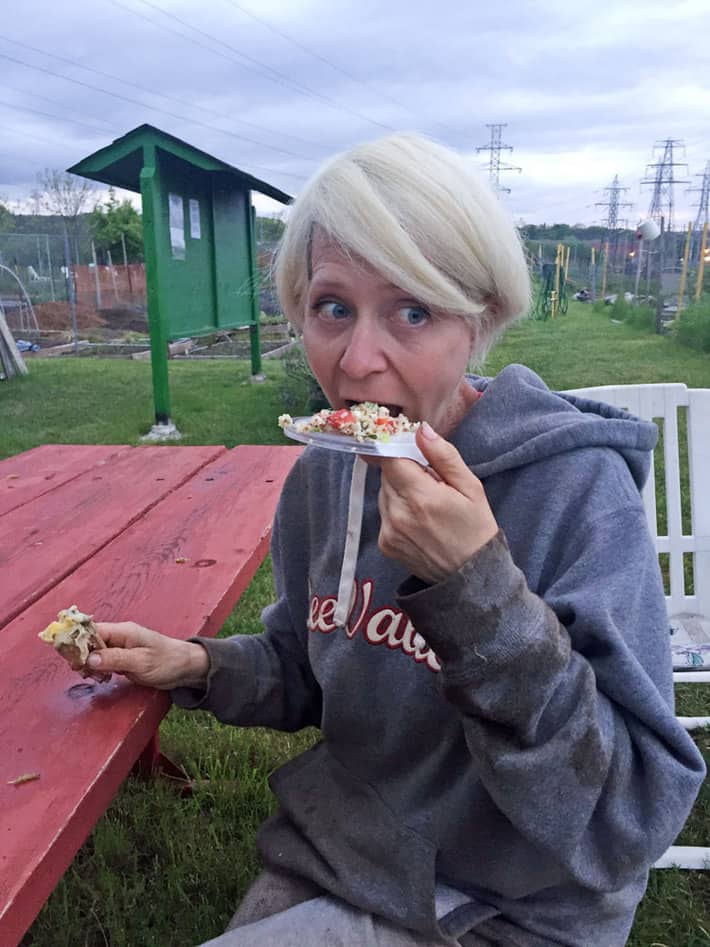 I love how pretty I am.  I’m so very proud to be so pretty. 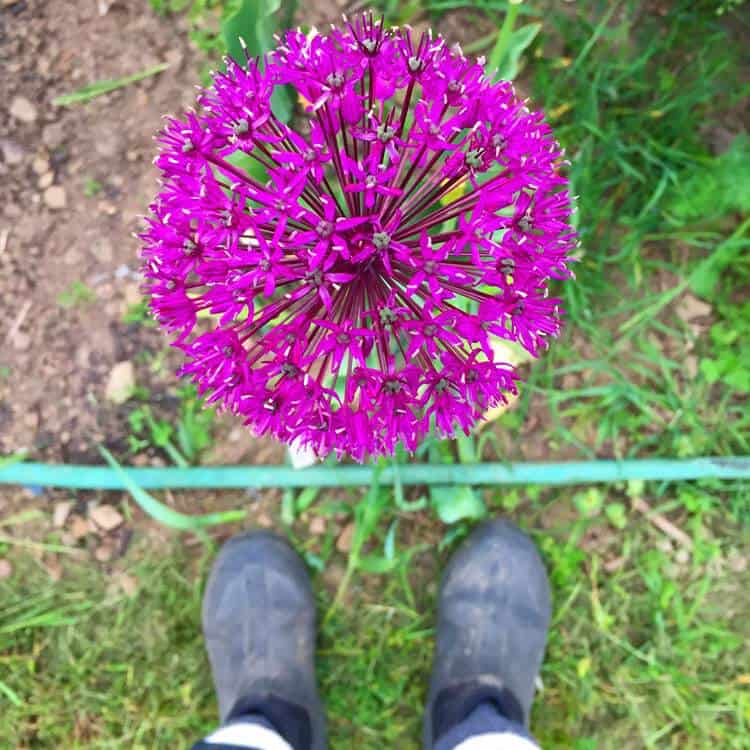 Another day, another moment to stop and smell the onions.  Here we go again.  Someone pass the juice.  Along with the snakes, voles, raccoons, and general crawly things that live in the garden I made friends with something astonishing.  Something I’ve never seen before and didn’t even know existed.

I made friends with The Green Hornet. 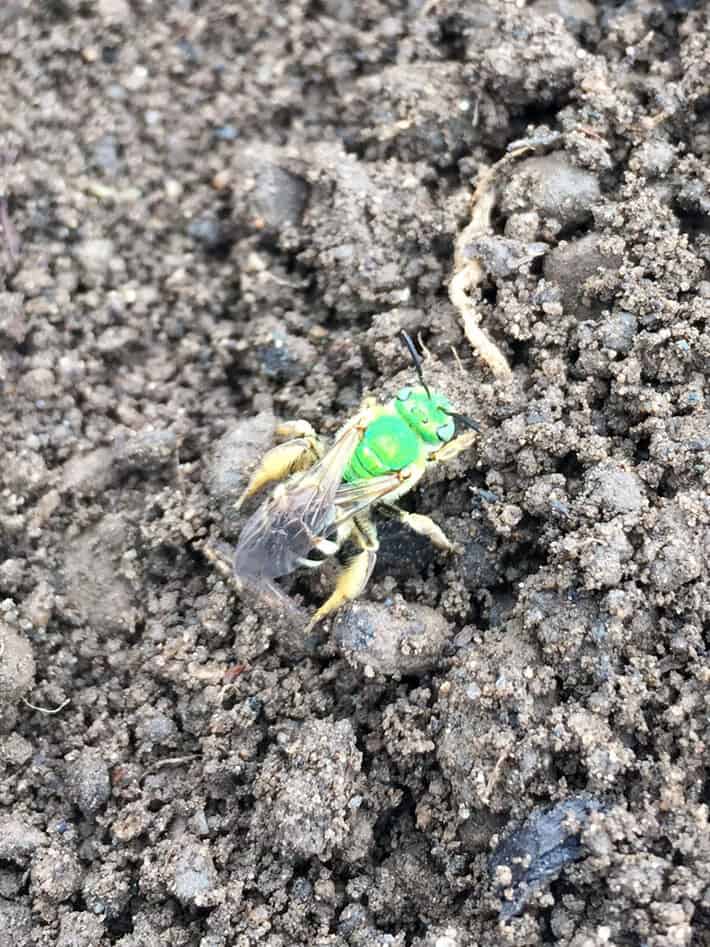 Except it isn’t a hornet, it’s a bee and it’s called a Sweat Bee and it lives in the ground, not in a regular bee hive.  But it is a genuine bee and it is LIME green.  That photo is straight out of my iPhone camera. No enhancing, no increasing the colour, no nothing.  THAT is how the bee looks.

Seeing that little bee gave me all the energy I needed to plant the very first thing in my garden.  I haven’t finished building the garden but I had to get my strawberries transplanted from my old plot to my new one. A few more hours of digging later and they were moved to their new home. 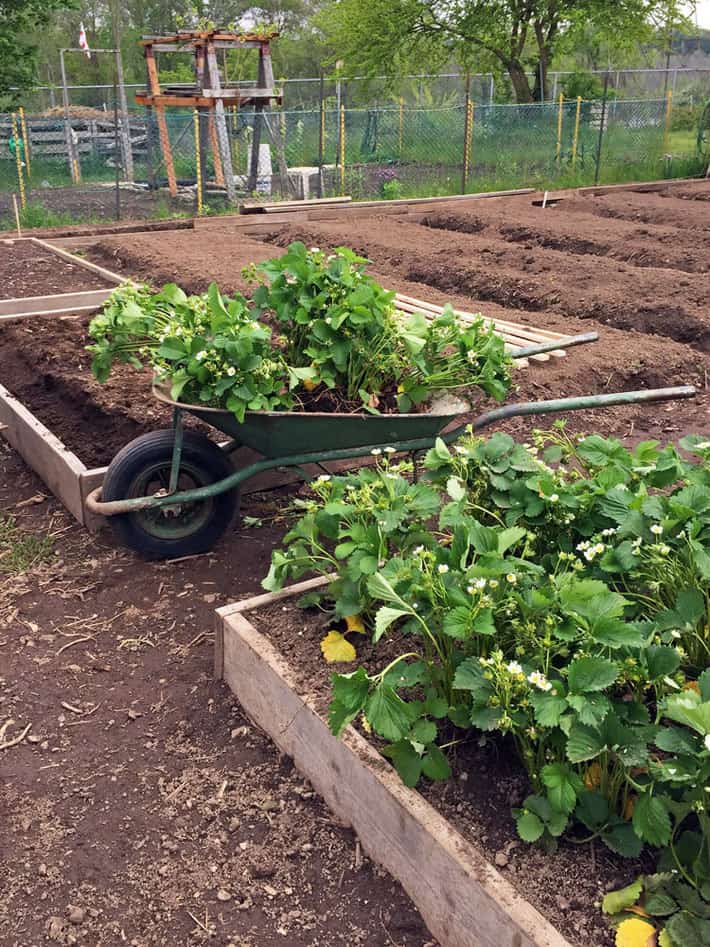 Like I said, the garden isn’t done but it’s more done that it was.  And that’s all someone who ever wants to accomplish anything can ask for.

As long as you’re closer to your goal today than you were yesterday you can rest easy in knowing that you’ll eventually get there.

(As long as you don’t punch yourself unconscious in your sleep and remember to drink lots of juice.)