Home » Tips » Fixing » My tip on how to fix almost anything. Plus a cat poop story.

My tip on how to fix almost anything. Plus a cat poop story.

I just had to throw a hunk of cat poo down the toilet.  It was stuck to my cat’s trousers.  That sort of thing happens when you have a long haired, fluffy bummed cat who is also a champion pooer.

This particular cat is also pretty skilled at smelling like puke.  Like you’ve never smelled anything as alarming as the blobs of gut death that are expelled from her innards.  It’s like I feed her the devil.

And then I had to remove the devil shit from her bum with some toilet paper and walk it to the bathroom.

The distance at which you hold something away from your body is directly proportionate to the disgustingness of that thing.  Everybody knows that.  Let’s just say if my arms were 3 feet longer than they are, I still would have been uncomfortable walking this toilet paper wrapped horror to the toilet.

Ernie’s (that’s her name) litter box happens to be in my office, which is where I spend 80% of my working day. That means I spend a lot of time with a sweater tied around my head trying to filter out the stink after she poops. Nobody gets a good days work done when they’re choking on a wool blend.  Every once in a while the smell lingers though. It seems to follow me around and then suddenly … it’s gone.  There is reason for that.

Occasionally, and I mean occasionally, the devil poop will liberate itself from her furry cat ass and drop right onto my bed. 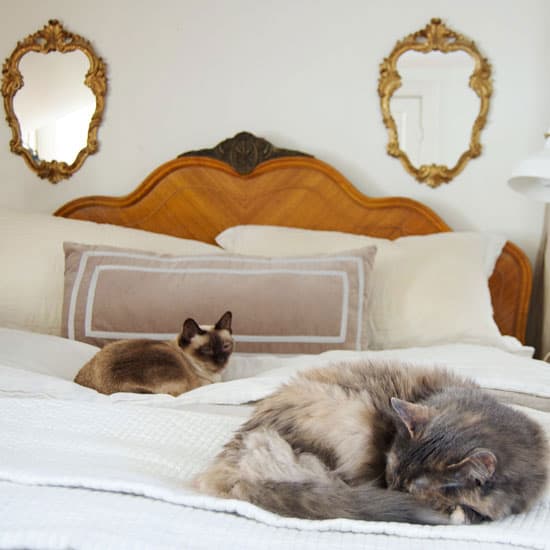 That is her.  That is the shit smuggler sitting at the foot of the bed.  She’s so cute.

One evening, not too long ago, cute little Ernie worked the poop off of her trousers right on my sheets, up near my pillow.  So let’s say exactly where my head was going to lay. There it was laying there.  Like a hotel chocolate.

Poop isn’t the type of thing you want hanging out on your sheets no matter where it comes from let alone the hellish bowels of Ernie, so at midnight I was forced to strip my bed and wash my sheets.  I’d dry them in the morning I figured.

Only when I went to make the exchange from washing machine to dryer things didn’t go very well.  I started the dryer up and began to walk away when it started to sound like it had the devil inside it too. I can’t really describe the sound the dryer was making and if I were a far better blogger than I am I would have thought to record it.  It was kind of like a really low pitched monkey howl squeal hiccup.

So I did what anyone would do.  I introduced myself and asked my dryer if it knew the Ikea monkey.  It did not. I don’t think … it didn’t answer so I took that as a no.

I couldn’t find any information about this particular sound on the Internet so I took the dryer completely apart and stared at it.  That didn’t do a thing.  I looked and prodded and tugged.  Nothing appeared to be broken, the belts were all fine, the thing I knew the name of when I searched about my problem on Google was good and there wasn’t any lint or anything else in the body of the dryer that could cause problems. 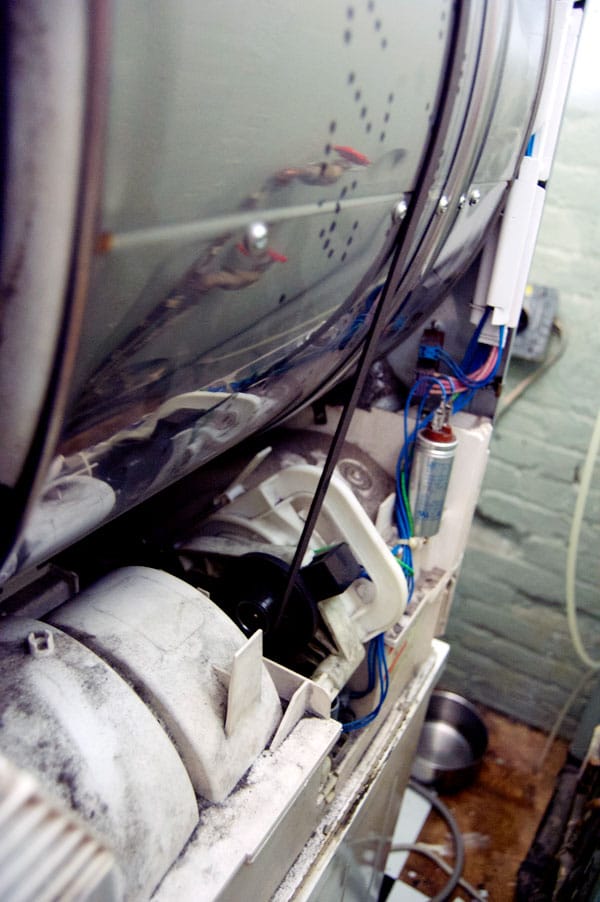 I have a really strong commitment to never calling a repairman because even in this day and age they tend to talk to me like “the lady of the house” and use hand motions when saying words like screwdriver or hammer in case I’m not familiar with such technical man terms. But I was exasperated and didn’t know what to do.  Finally, the only thing I could think to do was to find some motor oil for machines and grease ‘er up.

I squeezed little bits of oil onto all the moving parts I could think of.  Including this … 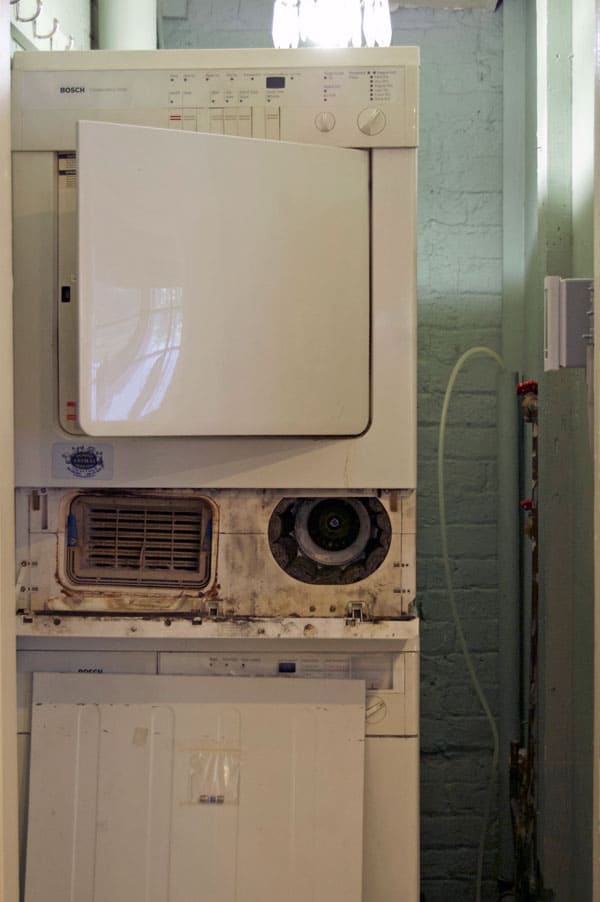 Here’s a closer look at it, and before you judge tell me when the last time you cleaned the inside of your dryer was.

I cannot even believe you’d think to judge me on this. 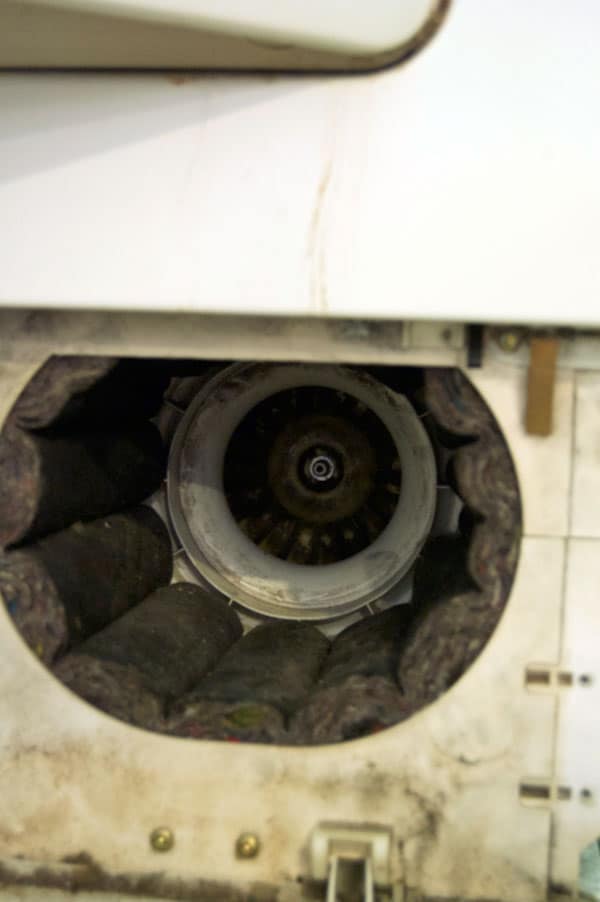 I call it the Whirley McSwivel-bob.  And it was the culprit.  That right there, behind the circular looking filter is the howling devil monkey.

I’ve said this time and time again. If you can’t figure out why something isn’t working, take it apart, blow on it, then put it back together.  9 times out of 10 (completely made up statistic, much like Jennifer Aniston’s age) it fixes the problem.  In this case it took a little more than blowing, it took some oil.

That’s all.  A few tiny drips of oil.  Which doesn’t explain why after fixing the dryer my kitchen looked like this. 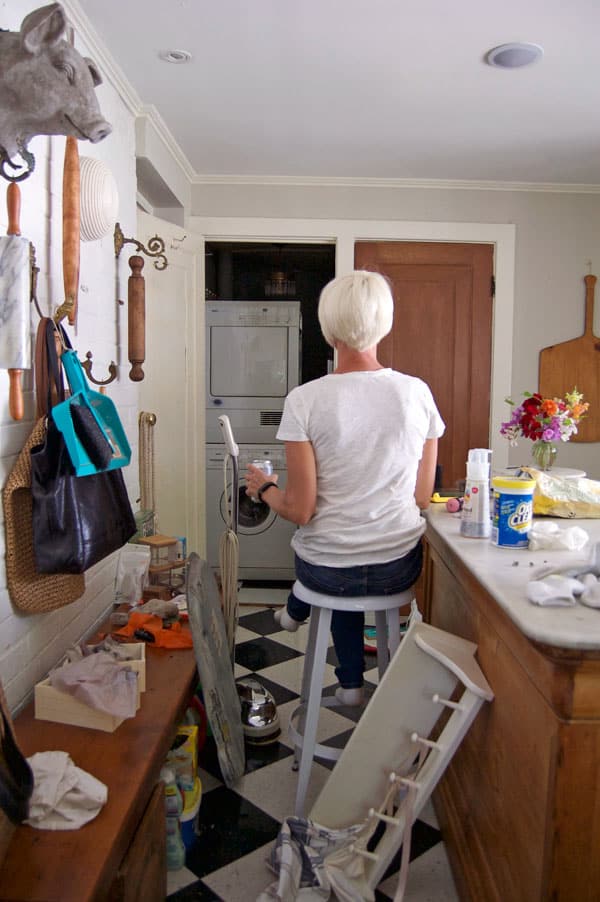 I blame the cat.