But that's all semantics, right?

Last week I took a week off from blogging to tackle the job of turning my front yard into a vegetable garden.  See Day 1 of this fiasco here.

Here are a few highlights of things that happened.

The week of work was broken down into 3 stages.

I took forever deciding whether or not to include some grass in my plan or not.  I went back and forth on the notion of an all vegetable front yard but in the end finally decided on a small amount of grass.  I know it's useless, I know it's impractical, I know it's a pain in the ass.  But I like it.  I think a bit of grass looks  nice, adds a huge amount of nice green colour, and is really nice to walk on in bare feet.  Yup. That's a whole lotta nice. Especially when you don't own a dog.    Also since I had just ripped out all of our evergreen bushes, I felt like I needed something that would anchor everything.  And the grass is it.

The fella put his boots on and got down to work while I drew up plans for the garden.  Remember if you're going to do this and you have bulbs, decide whether you're going to save or chuck them.  I saved a few and chucked a few. 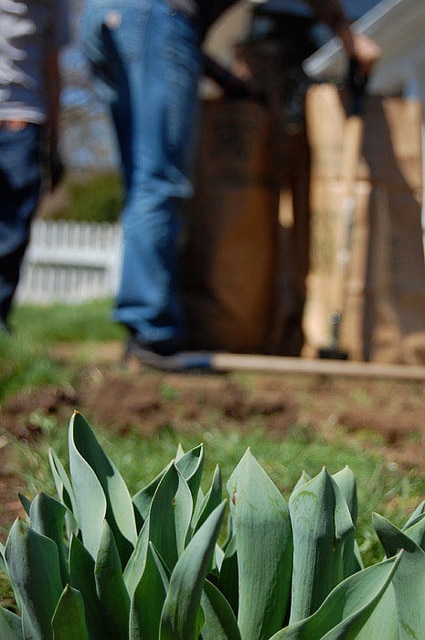 Digging up the grass took the fella an entire day.  And we don't have a lot of lawn. If you plan on doing this next year, lay black plastic over your entire lawn at the end of the summer.  By next spring it should be dead, and way easier to dig up. 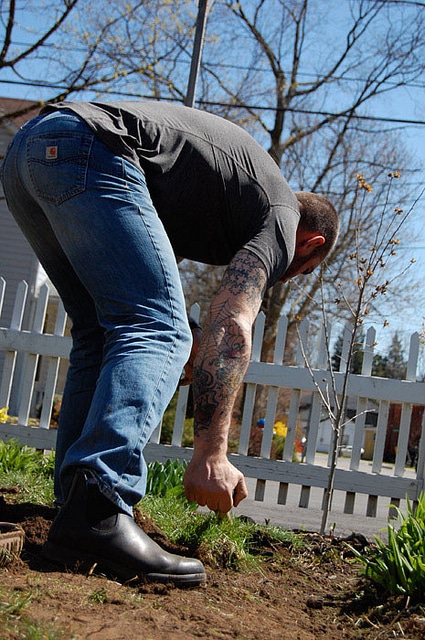 They sell actual spades for digging up lawns, but we just used an edger to slice under the lawn and roots. 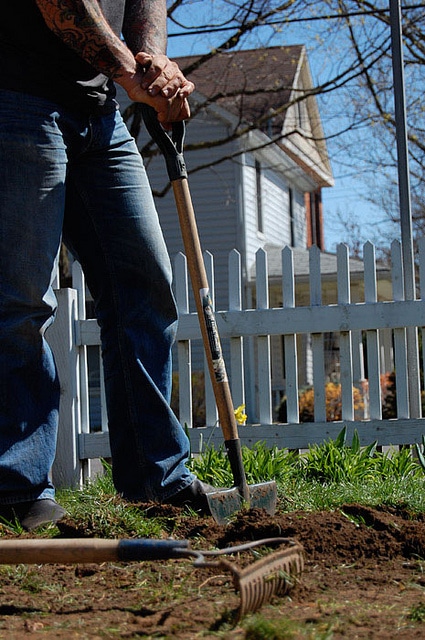 Once your lawn is dug up you can go ahead and dig your grave. 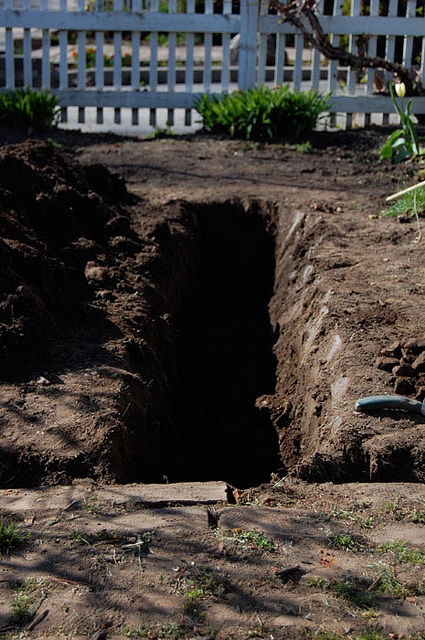 Just kidding.  It's actually a trench for an automatic sprinkler system.  To get under our brick walkway the fella used the pressure washer I gave him for Christmas to blow a hole underneath to run the pipe through. 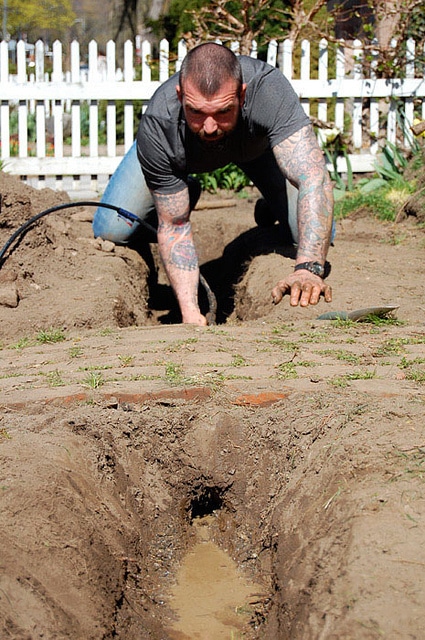 Then it's just a matter of connecting and running pipe in the trench and adding the sprinkler heads.  For now we're just going to attach the sprinkler system to a regular water timer from a hardware store.  That way we avoid the pesky problem of installing a solenoid and dealing with electrical work. 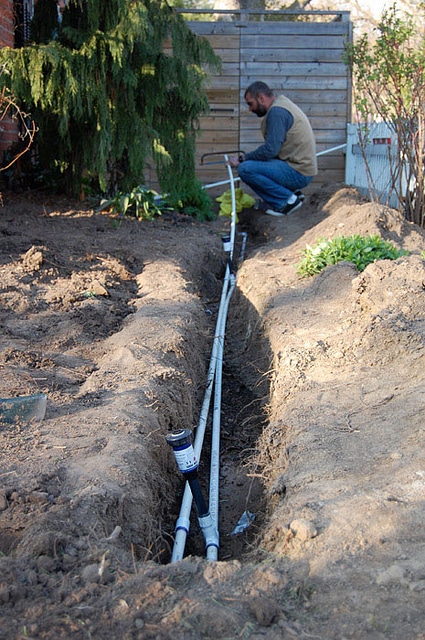 Fill the trench in with dirt, pack it down, fill it in with more dirt, pack it down until your trench is filled.  Sprinkler system complete.  By now of course the fella is getting tired and my brain is positively exhausted from trying to decide where and what to plant.  I'm pretty sure I developed a callous on my frontal lobe. 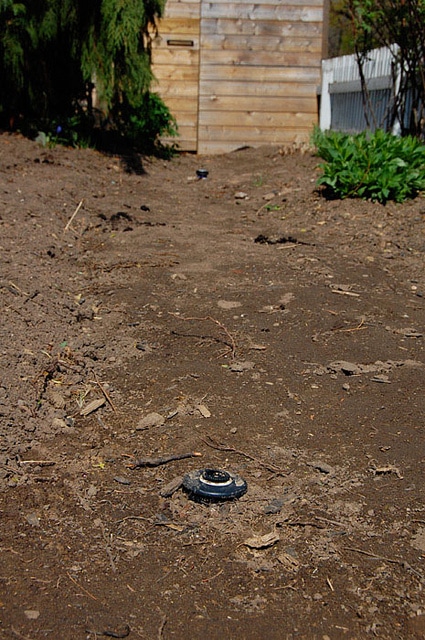 Once the lawn was dug up and the sprinkler installed I had to get rid of all the  sod which is no easy feat in itself.  Most recycle centres do not take sod and oftentimes  you have to actually pay to get rid of it.  Luckily for me I have Dr. Richardson and Christie View Farm to come to the rescue.  We borrowed a trailer and took the sod up to his farm where he's going to use it to fill gopher holes.  Because he has a real farm not a pretend farm - like me.

Once the yard was relatively cleaned up I could start working on the beds.  I planned out where they were going to go then started digging.  And digging.  And digging.  If your plan is to grow root crops like carrots or potatoes you need to make sure you soil is loose and rich with compost.  Otherwise, it'll get all hard and angry and you'll grow small, round, poo ball looking carrots.  So dig, dig, dig.  Turn that soil. 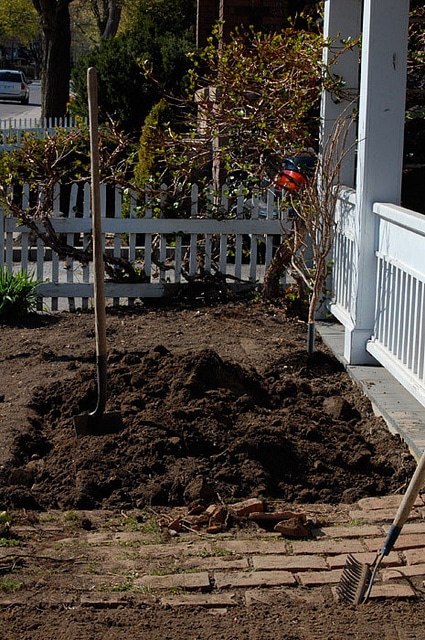 As you can see, the bed on the right has been turned and levelled.  Just turning the soil raised the bed up by a good 5 inches. 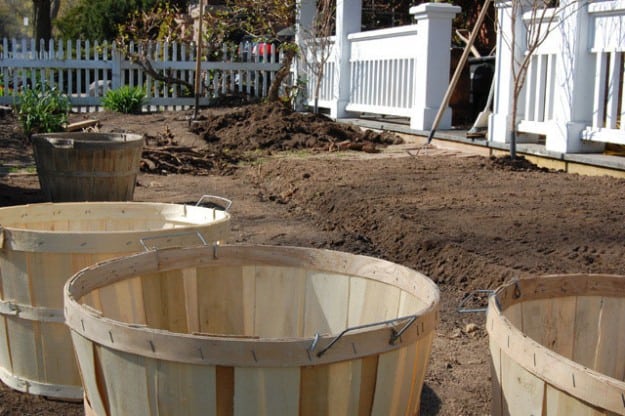 On my last day off I got outside early and started laying out my beds for planting.  Don't be fooled.  Just because it isn't warm out doesn't mean you can't plant yet.  In fact there are many crops that do better in this kind of weather (if you're in Southern Ontario I mean) than hotter, summer weather.  Lettuces and peas to name a couple.

I'm loosely basing my plantings on the Square Foot Gardening Method, which involves planting in square foot patches as opposed to the more traditional way of planting in rows.  You can get more vegetables in that way.

I would like you all to take a moment to admire my attire by the way.  Yes.  Those ARE Ikeda overalls, circa 1992 as seen on Jennifer Aniston in many an episode of Friends.  I found them in the bottom of my jeans drawer.  This is the fanciest outfit I wore all week.  I did a lot of p'jama gardening.  Which no one in my neighbourhood blinked an eye at.  Which should probably worry me. 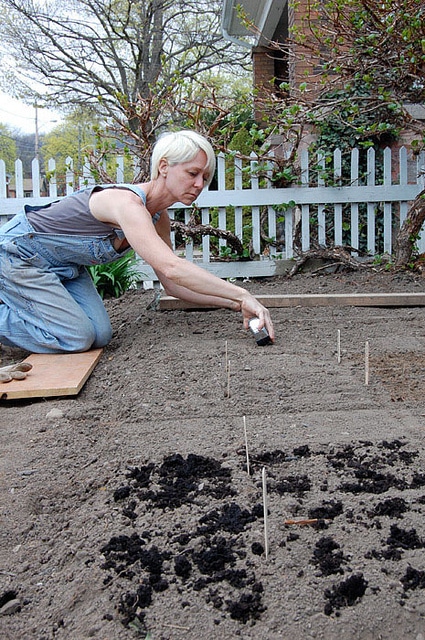 Once my seeds were down I checked the weather forecast 'cause that's what all good farmers do.  And clearly ... I mean I'm wearing overalls ... I'm a farmer now.  So, I discovered there was a huge thunderstorm coming complete with torrential rains and high winds.  So down went the feed bags.  Torrential rains and harsh winds would mean my day of planting my seeds in perfect, precision squares would be wasted.  And quite frankly, if that were to happen, Snacklefart wouldn't even come close to covering the obscenities that would fly out of my mouth.

I gently wet the soil then covered all my rows up.  They can stay like that until the seeds germinate.  The seeds don't need light to germinate, just moisture.  The second they germinate, you have to take the row covers off so the plants get light.  By now they will have established a tiny root system to help them stay in the ground during rain. 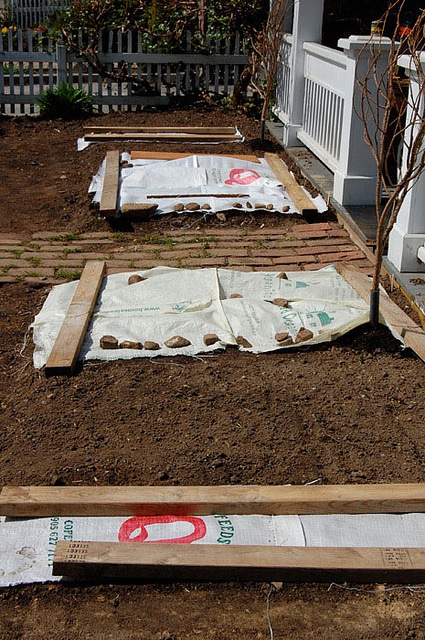 Everything's still quite a mess, but the garden is getting there.

When I pulled out the huge Yew that was on my front lawn, I salvaged several large branches from it and removed all the needles from it.  I then cut some PVC pipe, hammered it into the ground and stuck the branch in the pipe as a support.  I did this in a few places around the yard.

They will be my pea brush.  Support for my peas.  When the peas grow, they'll cover the bare branches, giving the look of a small bush.  I'm very clever sometimes.  I mean, my mom doesn't think so, but other people do. 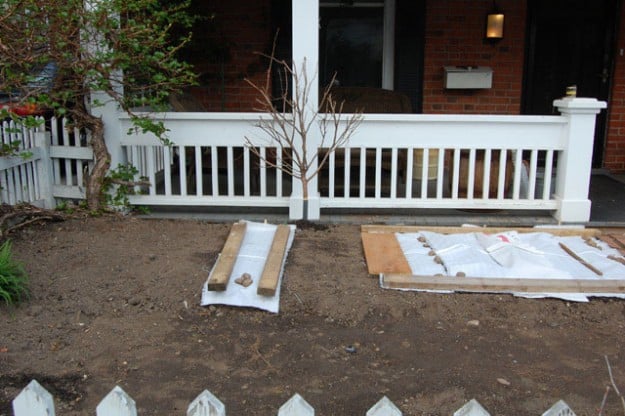 The tee pee support to the right of the picture was made out of bamboo sticks I bought at the Dollar Store for $2.  I'll let you  know what they're for ... next gardening post. 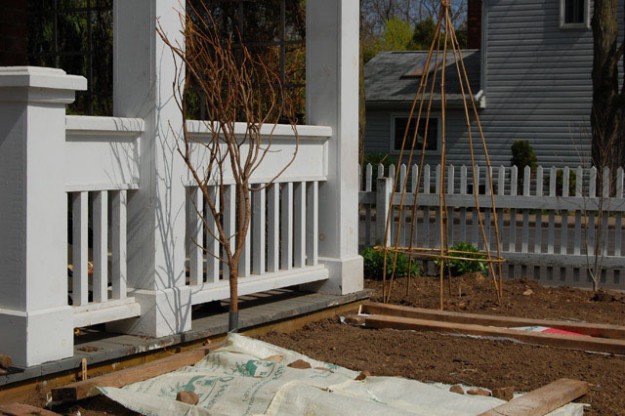 Next week I'll show you the complete vegetable plan, what I'm growing, where and how much I expect to get from my very small front yard garden.  Right now I have to go hunt down that one person who said my garden was going to practical and let them know it is also going to be beautiful.