It's done. Kind of. Actually it's not done. A vegetable garden is never really "done". It's what's known as a constant work in progress.

So, more preciesely, it's done more than the last time you saw it.

I welcome you to (but keep your paws off my vegetables) my Front Yard Vegetable Garden. 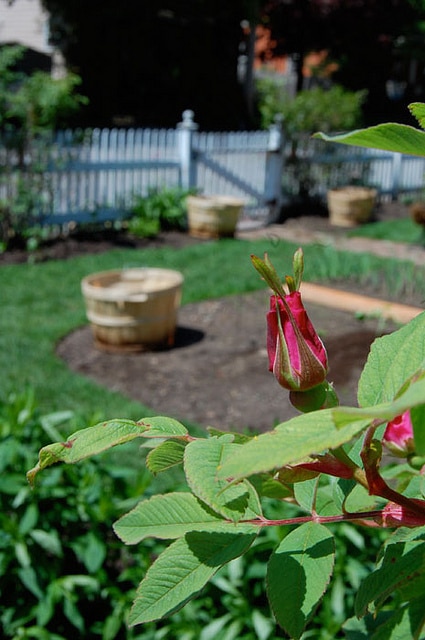 As you can see, I ended up leaving some grass.  I went back and forth about whether or not to have grass but finally ended up deciding, even though I know it uses up a lot of water, it's a lot of work and prone to up and dying ... I like it.  I mean, those things don't stop me from owning pets so ....  I'd like to introduce you to my newest pet; Blade.

It adds a nice amount of green and it's soft on  my feet.   Plus it plain old looks pretty.

If you read this, you know the baskets all around are filled with seed potatoes. 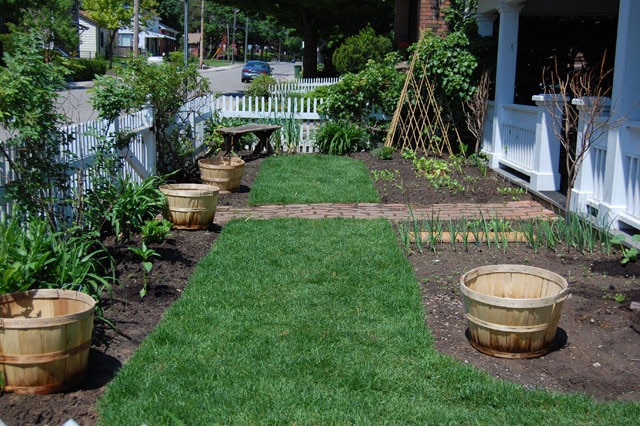 The left side of the garden has radishes, beets, Kale, spinach, swiss chard, all kinds of lettuces, herbs, peas, fennel and to the far left, a couple of the heirloom tomatoes I grew.  Unlike regular tomatoes from the garden centre the heirlooms will grow very tall.  Heirloooms are "indeterminate" which means their height and size isn't pre-determined.  Most garden centre tomatoes have been hybridized and genetically altered to make them "determinate".  A specific size that they grow to and then stop.  I knew heirlooms could grow very tall, but was shocked, stunned and kind of frightened when a reader commented that hers had grown to 14 feet. That's not a tomato.  That's a character in a Brother's Grimm story.

Of course the height is determined a little bit by the length of your growing season.  So hopefully mine won't go too far past the 6 ft bamboo tee pee I'm supporting them on. Eep. 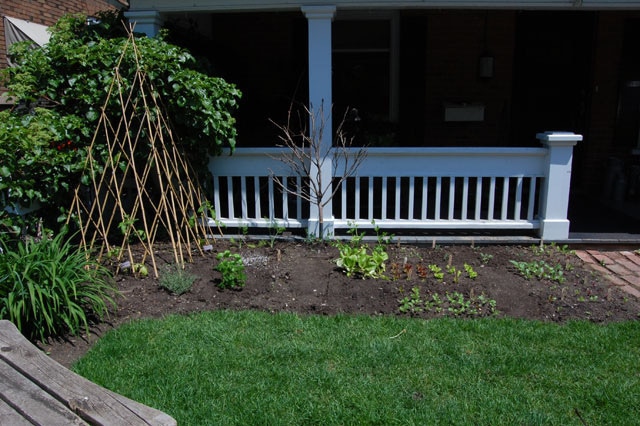 You've probably noticed my wooden board in other pictures.  Because I only have access to my garden from one side, I've left strips of soil that aren't planted with anything.  I can then lay the board down onto any of those strips and stand on it to weed and pick the vegetables all around me.  Otherwise I'd be stomping down and compacting the soil.  Works great. 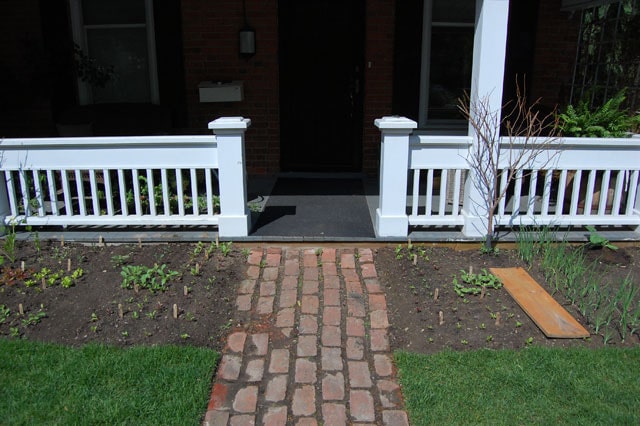 The right side of the garden also has radishes, beets, peas and swiss chard.  Then there's carrots, zucchini, acorn squash, potatoes, and a spot where sweet potatoes will go once the soil gets a bit warmer. 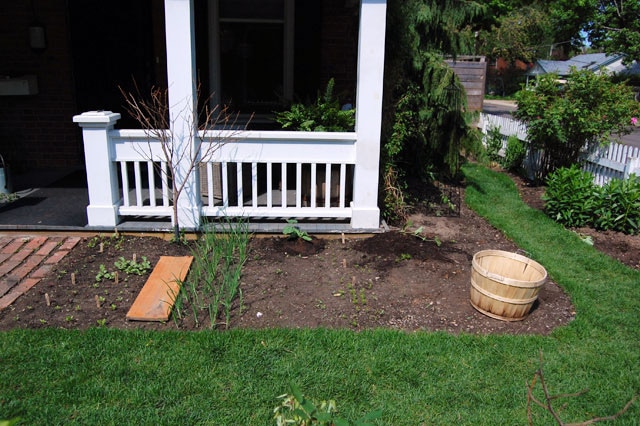 This I am proud to announce is my first pick from the garden.  A French Breakfast Radish  as grown from seed.  (purchased from Cubits) 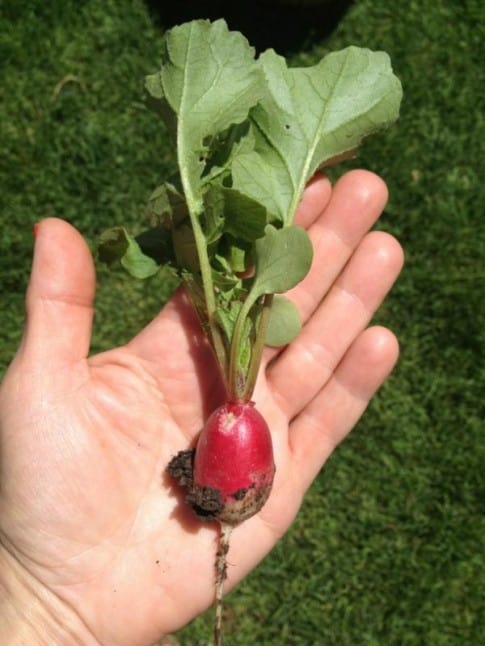 The entire outside of the garden is still filled with perennials like roses, phlox, lavender and other english garden staples.  BUT ... 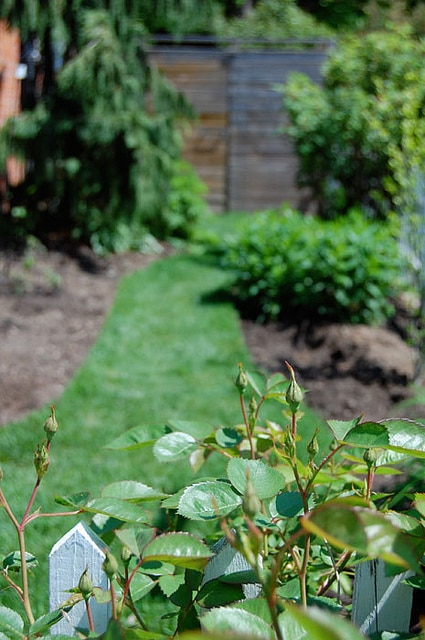 I've also filled in areas with rows of a variety of potatoes.  They're planted in baskets and right in the soil. 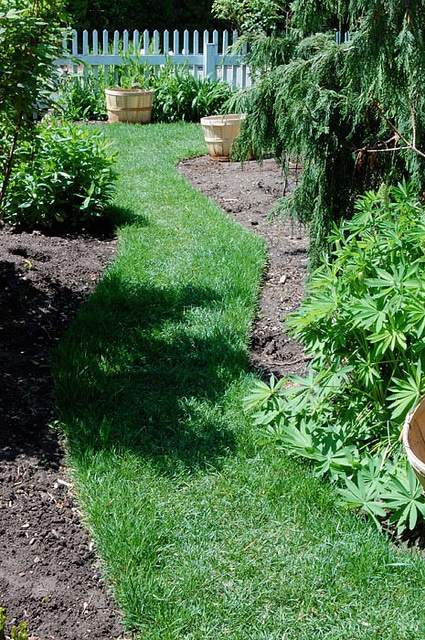 Seriously.  Wherever I could shove a basket of potatoes I did.  In this case the potatoes have lupins on one side, peonies on the other and ... 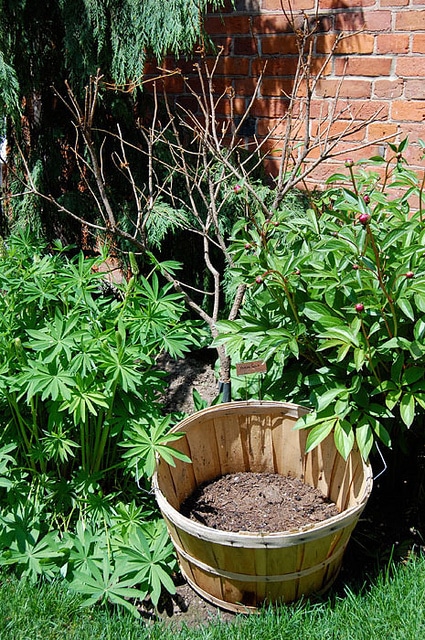 Peas right behind it.

The general look of the garden is organized but not pretty, perfect, cutsie.  I can't even begin to tell you how much fun it is to come out and see how much everything has grown overnight.  In a few more days I'll have more radishes to pick and the lettuce is just about ready to use tiny bits in salads.

I'M FREAKING OUT.  It's so very, very exciting. 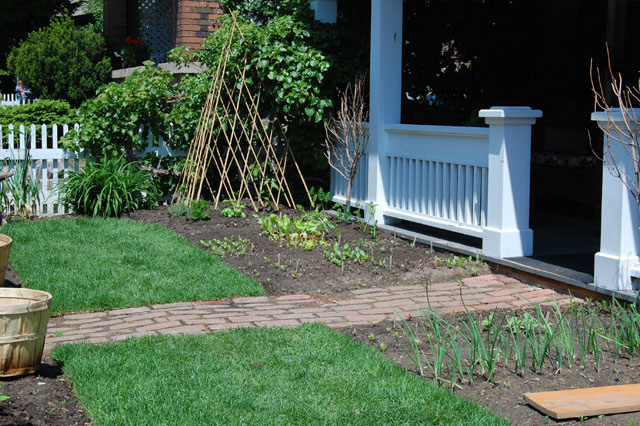 I grew 80% of the plants myself from seed, like the heirloom tomatoes.  The two at the front are Black Krim (a dark, almost black tomato) and Costoluto Genovese (a large irregular shaped, scalloped tomato). 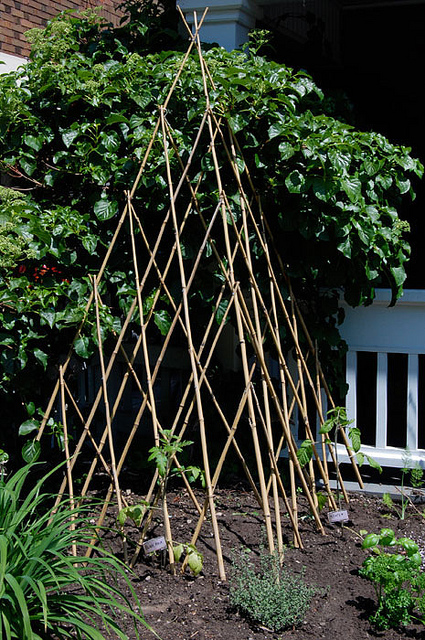 As the tomato grows I'll just loosely tie it to the tee pee to keep it from toppling. 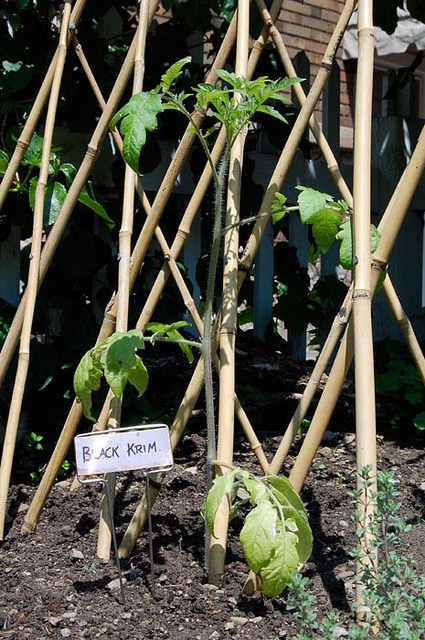 The basil I grew from seed ... the parsley I did not. 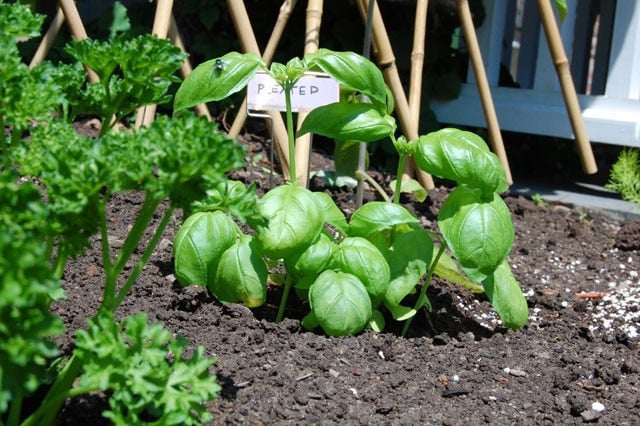 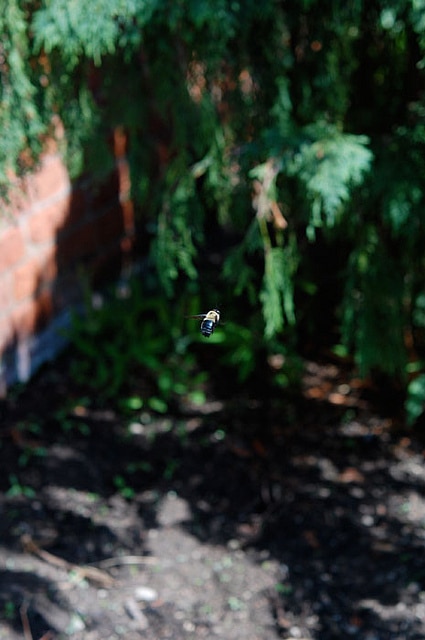 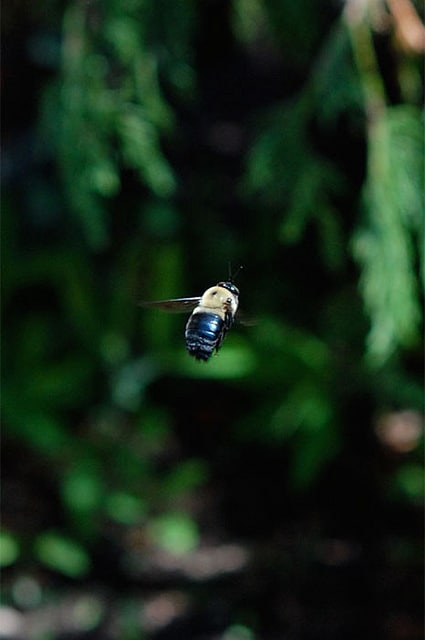 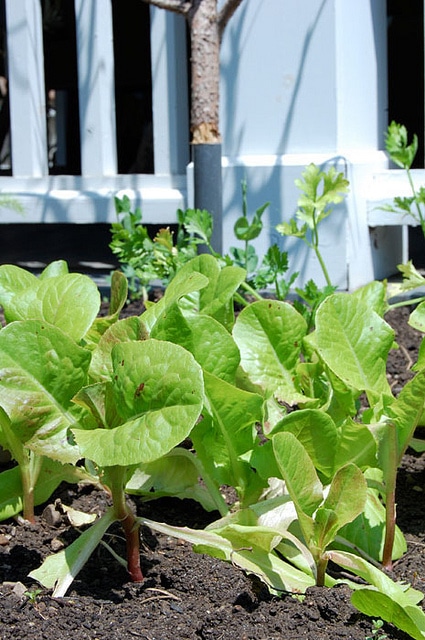 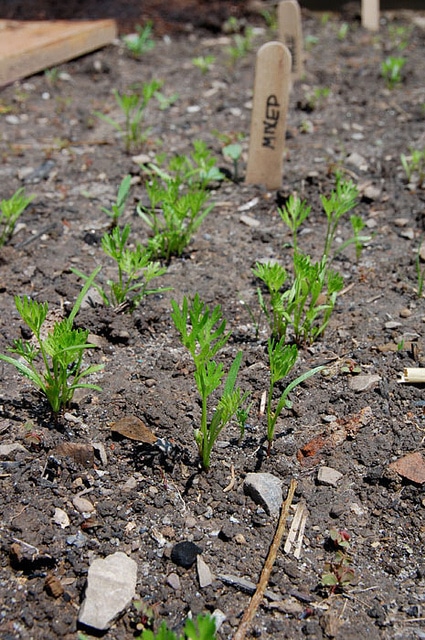 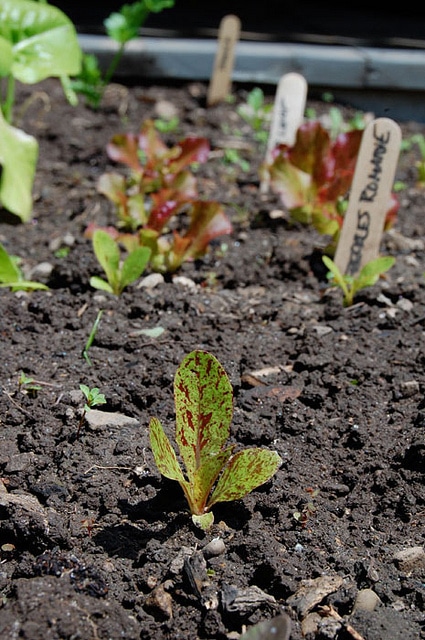 Red and Green leaf lettuce.  Seeded in garden beginning of May. 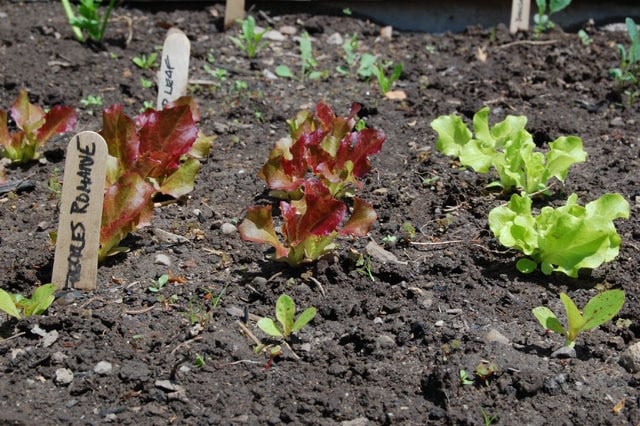 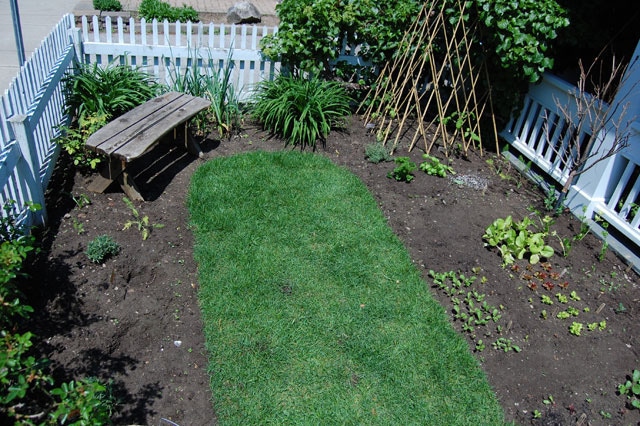 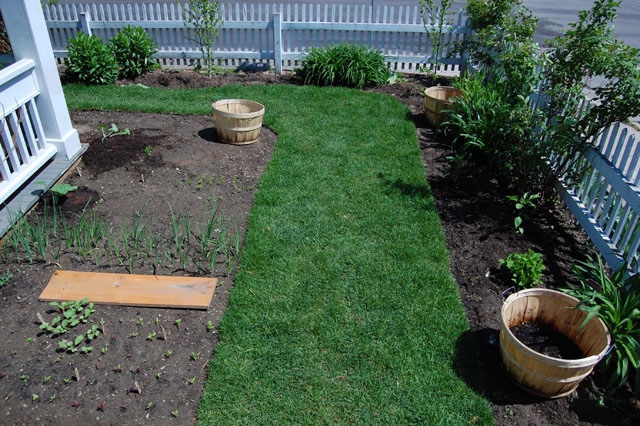 Red and yellow onions.  Planted from dutch sets in April. 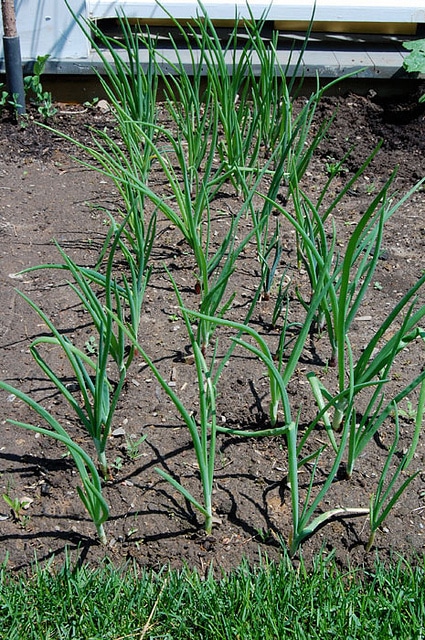 MY POTATOES ARE ALREADY GROWING!!!  Planted in baskets beginning of May. 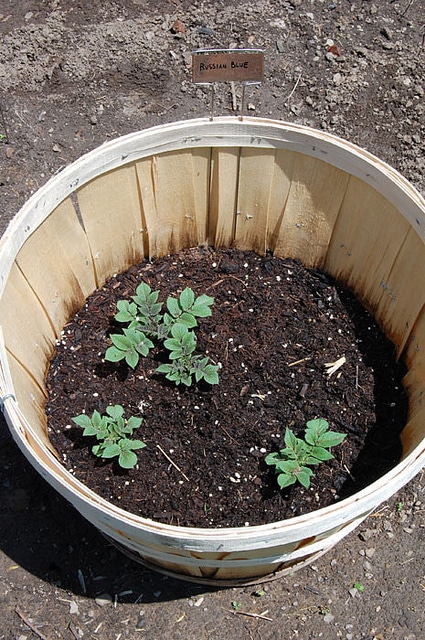 French Breakfast radishes.  One of the many radish types I'm growing.  Direct seeded into garden in April. 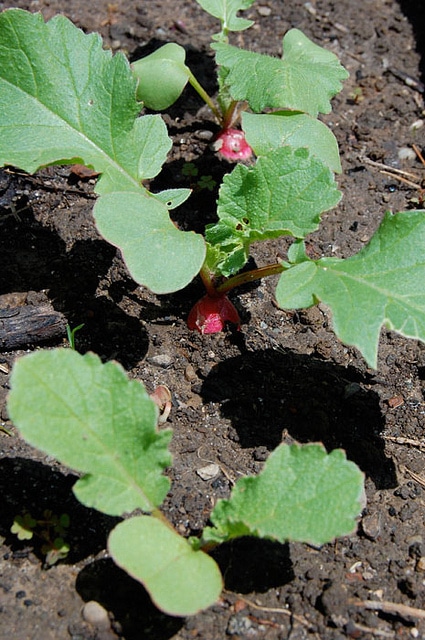 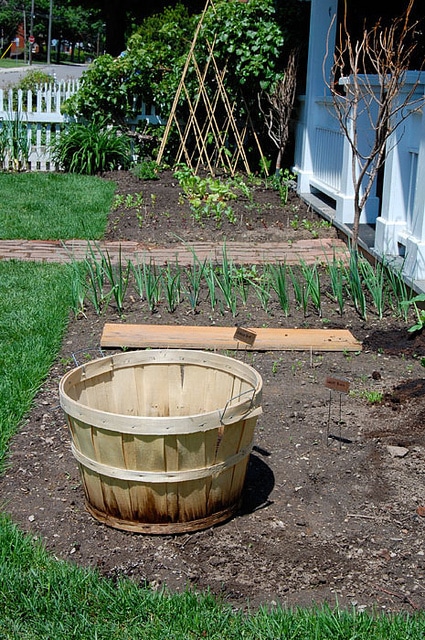 And finally ... one of the plants I bought at the nursery 'cause I just couldn't help myself.  I love growing everything from seed, but there's comes a time in gardening when you're sick of waiting and you want some INSTANT gratification.  I got it in the form of celery. 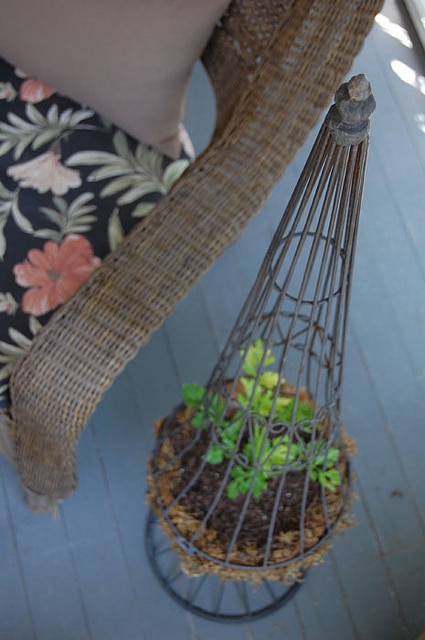 I planted the majority of it in the garden, but decided to throw this one in a topiary cage.  Just for fun.  It'll probably die. 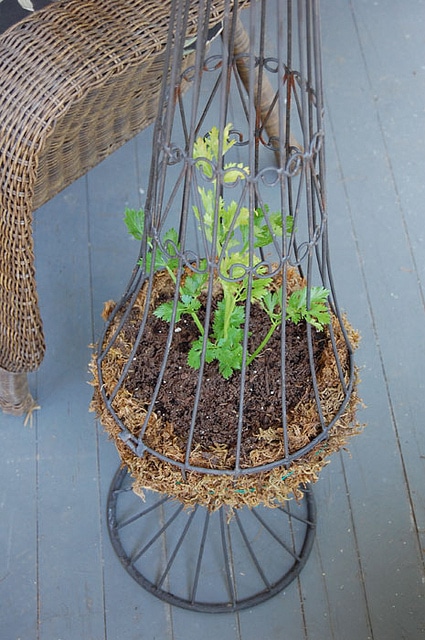 But until then ... I will sit, relax and enjoy looking at it. 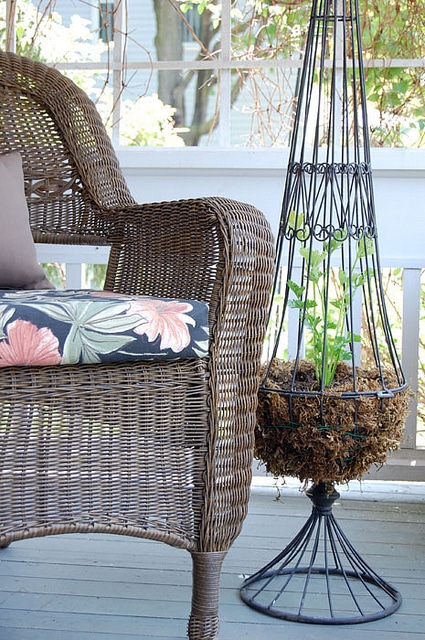 This isn't  every plant I've stuck in the ground, but the majority of them.  I also have jalapeno peppers, green chile peppers, zucchini, a few more tomato plants, a bunch of acorn squash, some fennel (did I already mention the fennel?), and the plant I'm probably most excited about ... a Bay Laurel.  Yup.  Growin' my own bay leaves.

This long weekend in Canada I got everything planted other than the Sweet Potatoes which I'll put in next weekend when the soil has warmed up a bit more.  And then ... it'll be done.

Wait.   No it won't.  I already explained that.