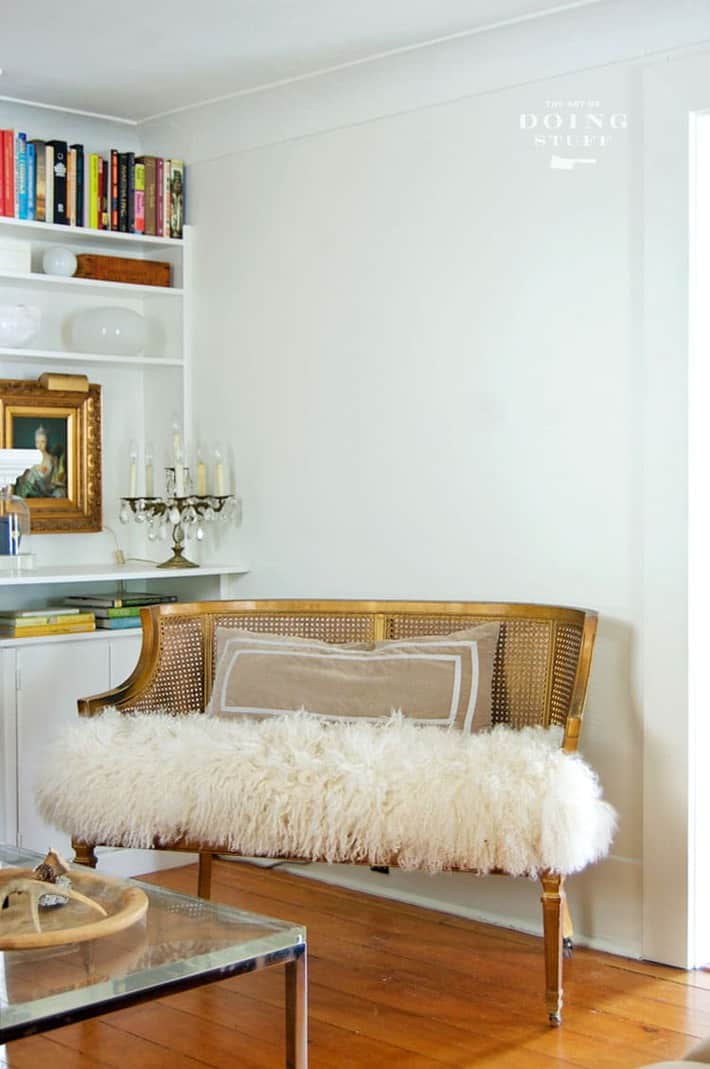 Staring around my living room right now can see 5 or 6 things that were bought at regular stores. And by regular stores I mean the kind that have customer washrooms and their own catalogues.

The couch I got from EQ3. It's hopefully on it's way out soon.

The coffee table I got from The Bay.  It will be painted soon.

And the throw on the settee (or the tutu as my neighbour Jane calls it) is from Homesense.

And a couple of accessories and lamps from other credit card accepting stores.

Anything else of any significance in the room was found, scrounged or otherwise had from a unique place.

If you want a unique room you have to shop unique places.  Like an antique store or thrift shop or dumpster.  Wherever. Just not at a big chain/box store.  Step away from the box.  You need places like Ikea and Homesense (Homegoods) for certain things and they're way easier to shop at than say, a pop up flea market in the middle of Memphis, but if you're looking for a home with a little soul, take the road less travelled when you're looking to decorate.  And also take cash. 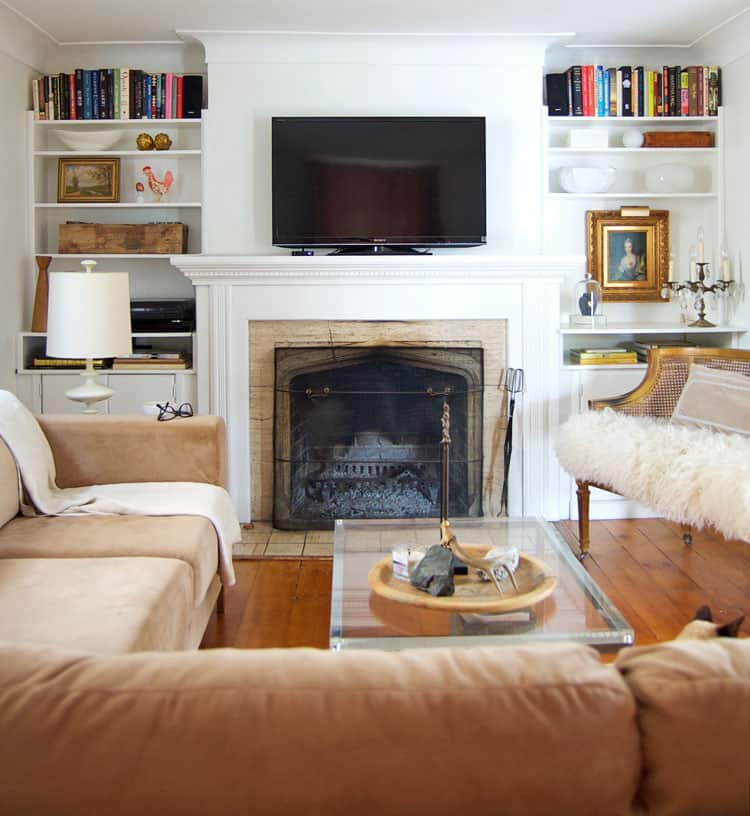 You don't need to spend a fortune to make an interesting room.  You just need to be interesting.  Or at least be able to fake being interesting.

If you ARE interesting and have actually left your house and done things, prove it.  If you go on vacation buy something that you love and will actually look good in your house.  Don't want to buy anything? No problem.  Steal something.

On my coffee table I have a round wood platter filled with things I got when I was away having fun, doing something other than feeding chickens or typing on a computer. There's an antique Burmese tattoo gun I bought in Thailand, an antler from my grandfather's house (he was a hunter, I am not) and 2 rocks.  The one black rock is from the beach where I went surfing in Tofino, British Columbia this fall and the other is from the stupid, stupid mountain I climbed like an idiot on that same trip.  I love those damn rocks.

Take my shelves as an example.   In my slowly progressing mini-makeover I took everything out of the bookcases in my living room and only put back things that were I loved.  As it turns out, the things that I loved were also the most unique things.

Like my 3D, clear model of a chicken, a gift from a reader.

Beside the model is the very first egg I ever got (from Norma).  Well, if you read this post you'll see technically it was my second egg, due to the chickens going mental. And beside that is a beautiful little painting of grazing sheep I got at a garage sale for a few dollars.

Beneath those things are the barn board planter box I built a few years ago. I also used  my waxed paper transfer technique on it (all you need is a printer and wax paper). 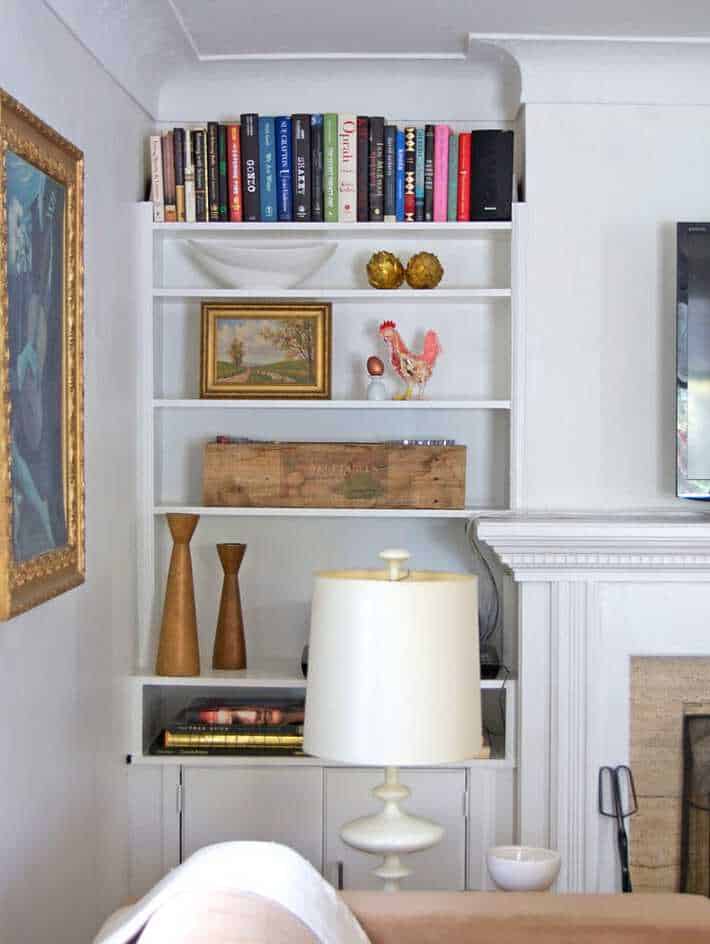 The mid century modern candlesticks were from a local antique market.  The white bowl near the top *did* come from Homesense and the gold artichokes from a garage sale.  So that's one thing out of everything that came from a big store, but I like the shape of the bowl so I keep it.  Just because it came from somewhere other than a Tibetan cave doesn't mean you can't value it.  Although stuff from Tibetan caves are pretty cool. 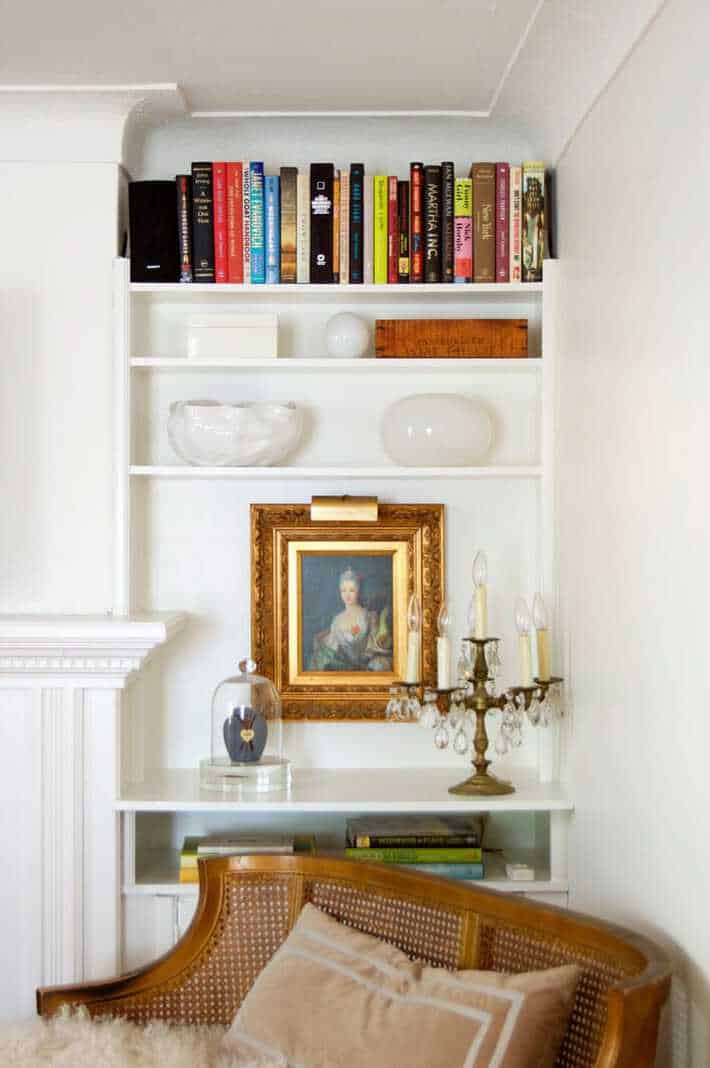 Over on the right side of the bookcase, same story. The lamp was from a lamp store that was going out of business and the antique chandelier lamp was the only thing in the store that wasn't regular, new stock.  I'm not sure why they had it in there, but they didn't value antiques at all so they practically gave it to me.  I think it was $20?

Behind the chandelier is a portrait painting I bought at a very small accessory store. The owner had different portraits like these shipped in from Asia somewhere where they're mass produced by artists. They're copies of famous English paintings.  Except as skilled as they were, the Asian copy artists hadn't perfected the caucasian eye; so all their portraits of British nobility etc., have Asian eyes.

The last thing on the lower shelf is very interesting and meaningful indeed.  It's Cuddles.  World's greatest cremated chicken.  Under a glass dome.  On a glass block.

You can't pick up one of those at your local Costco. 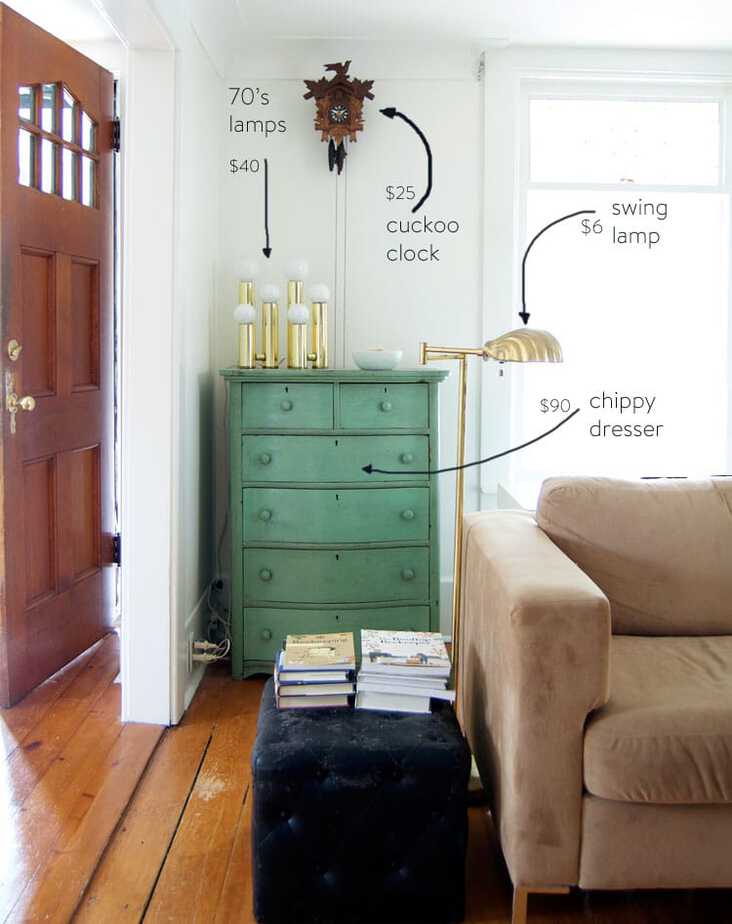 This corner isn't quite done but it's pretty close.  And it too is an amalgamation of cheap local thrift store or flea market finds.

Also.  Don't follow the rules.  Don't worry about the rules.  Sometimes the rules are right, but really, just try stuff out.  Move things, pile things, do things WRONG.  Sometimes doing things wrong is really the only way to get them right.

When I get a bit more under control with work in the next week or so I'm going to start installing my built in dining room bookcases.  I don't think it's going to be too big of a job, which means it's going to be the world's worst job and I'm probably going to end up having a nervous episode and run screaming through the streets wearing my pajamas, work boots with a hammer held high over my head.

But that's O.K.  It makes me interesting.