Tonight is the night. All Hallows Eve. A night for apple bobbing, door answering and candy stealing.

Most Halloweens I make a big pot of chili for dinner, and once the kids have thinned out, I turn the lights off, put on a scary movie and curl up in front of the fire with my dinner. It inevitably goes untouched because by 8:00 or so I’m actually bleeding chocolate from my ears but chili is tradition so I make it anyway.

In terms of the scary movie I lean towards things that are actually scary. Like The Exorcist or The Shining or anything with Rob Schneider. Eek ick.

O.K. I actually lied about The Exorcist. I watched it when I was really young and it scared me so much that I can barely even type the words The Exorcist. And I’m not the only one who feels like this. The Exorcist is often listed as the scariest movie ever made. Anything to do with the devil, being possessed or ghosts scares me WAY more than a dude in a mask with an inferiority complex.

My house was built around 1840. I know if you’re reading this from anywhere in Europe you’re probably wondering how I manage to live in something so modern and soulless, but around these parts, the 1800’s is about as old as it gets. When you think of an old house you immediately think that it could be haunted but the truth is, if you’re the type to believe in ghosts or hauntings, then the fact that your house is hold doesn’t have a ton to do with it.

According to people in the know, a house can be haunted by ghosts or entities regardless of how old the house is. They can come in on objects or other people. And of course they can arrive through death.

I have no idea how the ghost in my house arrived but I can tell you it lived here before I did. When I moved into my house I was kind of hoping for a ghost; in that, ghosts don’t really exist, kind of way.  Then as the days wore on and the confusion of moving in settled down I noticed something. It wasn’t a big thing.  It was just big enough to be noticed. 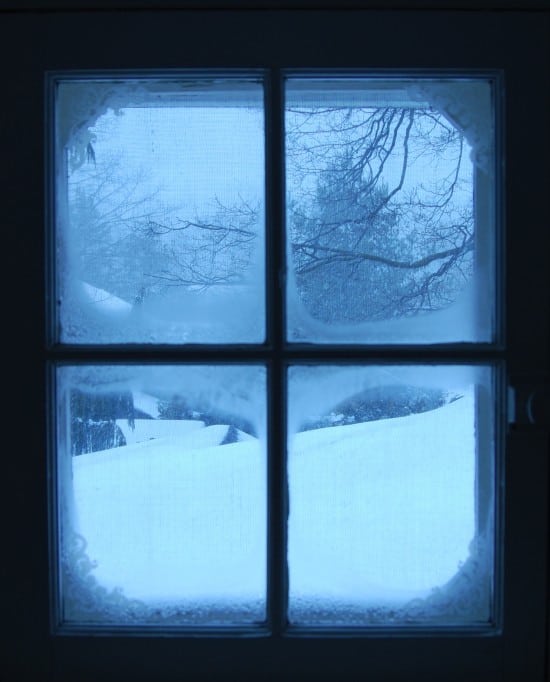 At the top of my staircase is a an old window.  It has  four panes of glass, a wood frame and a latch.  The first couple of time  I noticed the open window I figured it had just blown open, or I had forgotten to close it even though it was the middle of December.  I soon started to pay attention to pushing the window closed and clicking the latch into place before descending down the stairs.  Without fail when I came up those stairs, no matter how long or how soon later,  the window was open.

It didn’t scare me, didn’t startle me, didn’t really frighten me at all.  If I were to dream my house was doing things like this it would terrify me.  If I watched a movie about it it would scare me even more.  Not even a fun scare.  A heart pounding, maybe I should turn all the lights in the house on kind of scared.

Soon I started to notice shadows moving and little black smoke-like puffs darting into corners or behind doors.

At the advice of a friend who actually really does believe in these sorts of things (I was still on the fence, even though I had a house that was beginning to show more personality than my first cat) I told it to leave.  I closed the window one last time and said, enough.  This bugs me, I don’t like it, you’re pissing me off now, so GO.

And it went.  The window never mysteriously opened again.

I understand it’s not the most remarkable ghost story in the world.  Or the scariest. There were no bloody hands shaped as hooks or furniture swirling up to the ceiling or gauzy apparitions floating across the room.  Oh wait, yeah, there was that actually.  They were more like black clouds of smoke is all.

What makes it unique, to me at least, is that it’s the truth. One that I experienced myself and have no doubt about its authenticity.

Have a ghost story?

Now is the time to tell it.