Home » My Life » My Family » Goin’ to GRACELAND

At this very moment I am in the United States of America getting ready to take Betty through Graceland.  Pink Tool Belt and Fish Pedicure and I have brought Betty here for her 80th birthday.

This is how it happened.  Betty called me a couple of months ago to say she didn’t want anything for her birthday.  Certainly not a “big” present from all of us and she’d be really, really angry if we did that.  We were already in the planning stages of organizing a trip for her, plus we tend to ignore Betty on most things (including but not limited to haircut suggestions) so we ignored her on this too.

We presented her with her gift at her birthday party, but all we told her was that she was going on a trip and she’d have to figure out on her own where we were going.  Because there’s nothing more fun than screwing with an 80 year old.

She was given a series of clues over a few weeks and by the end of it if she hadn’t figured it out she got the final clue. If she didn’t get it by the final clue she didn’t deserve to go where we were taking her and the whole trip would be called off. 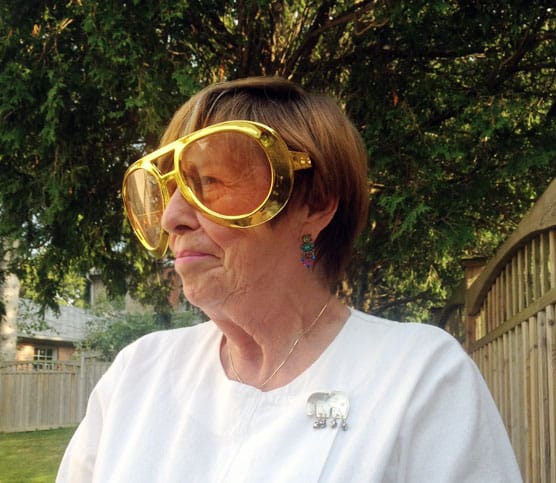 She got the clue.

Betty isn’t the kind of gal who is all that interested in anything other than Paris Fashion week so finding a spot that she’d want to go for her birthday was a bit of a challenge.  We wanted it to be just for a few days, not too far, but something she would really like. Also it couldn’t have anything to do with architecture, churches, history or any other boring thing.

Even though my mother grew up in the 1950’s she has a remarkably limited knowledge of any pop culture from that era.  Seriously.  She knows nothing about what was going on at the time. I’m not sure if it’s because she was stuck in a nunnery for a while or because she was more interested in the clothing store she opened in her bedroom when she was 16, or what, but this woman missed out on the greatest period in music history entirely.

The one and ONLY thing she knows about pop culture from that time is Elvis.  She loves Elvis.  This makes no sense when you consider that now, at the age of 80, she could pick the real Lady Gaga out of a drag show lineup,  identify all of the Kardashians based solely on their manicures and can name the past 10 Bachelors and their occupations.

I won’t be posting on Monday, but I WILL be Instagramming, Tweeting and Facebooking throughout the trip so even if a post isn’t going up you’ll still be endlessly entertained by everything going on.   If you don’t follow me on those things you should probably do that right now.

Now if you’ll excuse me I have some architecture, churches and history to not experience. Thank you. Thank you very much.