Home » How to (Halloween)

The pumpkin that'll induce fear year after year. Turning a Funkin (fake foam pumpkin) into a genuinely creepy Halloween decoration. Allow me to introduce you to the Pumpkin diorama. Or as I like to say ...

A decade ago when I was first starting out as a blogger, a magazine emailed me to ask what I would do with a "Funkin" (fake foam pumpkin). They were getting ready for their next year's Halloween issue and wanted to feature bloggers' ideas. This was it. This was my shot at being featured in a magazine and getting great exposure for my new blog.

I can't remember what magazine it was, just that THIS WAS MY BIG BREAK.

I immediately emailed them back saying if it was hollow, I would cut it open and make a creepy Diorama inside. I clicked send and waited for the response. And then just like in the movies ... I never heard from them again.

I guess the magazine didn't like the idea. I liked my idea so much that I made one just for myself. And you of course.

The pumpkin diorama is one of the most shared and copied posts I've ever done. Because it's GREAT. 10 years later and I STILL can't be humble about it.

I love it with all of my heart and the first knuckle of my baby toe.

The absolute BEST part about it is you can do ANYTHING.  Scary, cute, childlike, eerie. I go for creep, but you could also turn one into a cute woodland scene, or turn it into Cinderella's carriage.

You can be as detailed as you want as well.  I went so far as to fray the rope on the noose, put dirt on the ground and use battery operated mini lights to light up the skulls. But I didn't go so far as to clean up blobs of hot glue. 😂

I also cut a little hole in the astroturf so I could pop a mini light up from there. I then stuck the skull on top and BOOM you've got a glowing skull.

To create your own Pumpkin diorama there are only a few tips you need ... make sure you have a foam pumpkin that's hollow inside and ... actually it's just the one tip.

I got my pumpkin at Michaels and I was shocked to see they still carry the exact same ones. At the moment (mid-October 2021), it looks as though they're sold out in Canada but do have them in stock in the US.

A few more tips to make things easier for you ...

* If you use mini lights try to find ones that are on a timer so the Die-O-Rama will come on at the same time every night, and go off at the same time. It just makes life easier and batteries last longer.

A lot of the things I used to build the Die-o-rama I already owned so it didn't actually cost me $30.  I already had the bat, the lights, the grass and a few other things.  But if you were to duplicate mine exactly and owned none of the materials it would cost you around $30 provided you  have string, cardboard and twigs.

This post has 70,000 shares and counting. One of the people who shared it was Elvira: Mistress of the Dark. She Tweeted it. To have your little Halloween craft approved and tweeted by Elvira is like being a yoga instructor in a strip mall and having the Dalai Lama retweet your daily affirmation.

Take that magazine I can't remember.

I have something better than a magazine feature - I have Tweet cred.

If you make a Die-o-rama send me a pic. & I'll feature it on my Instagram Page.

Wanna see a Behind the Scenes shot?  It's fairly pedestrian.  Just a shot of me while I was working on my Die-Orama years ago at the dining room table in the middle of the night. I look like a celebrity in it. 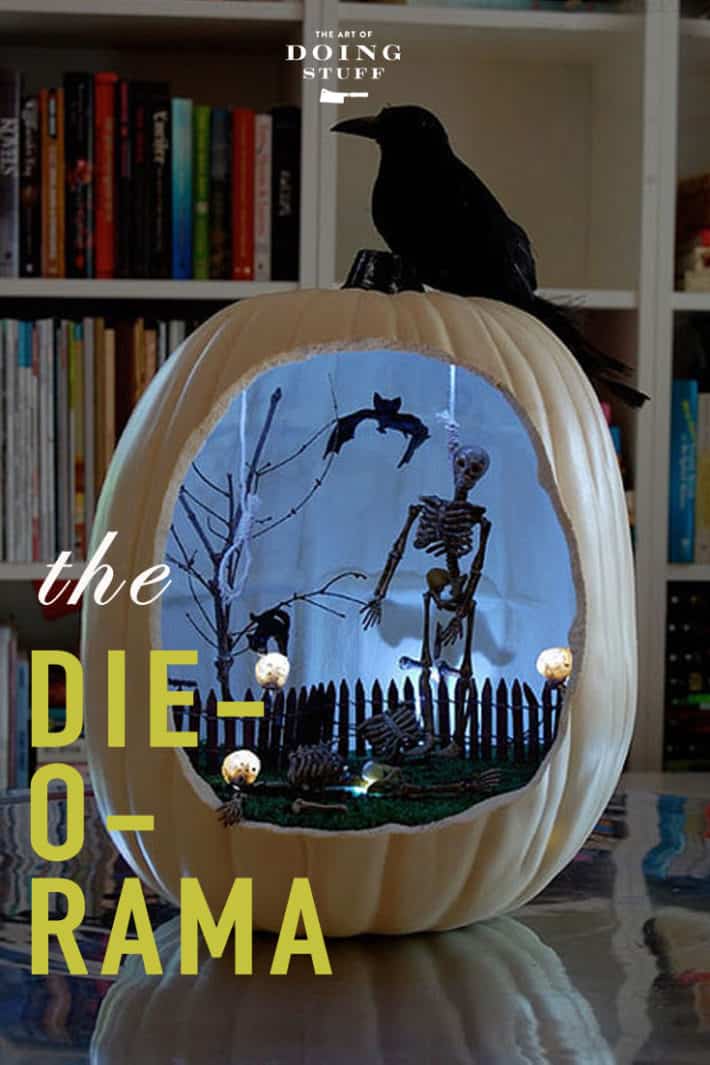 More How to (Halloween)