Home » My Life » Random Stuff » Hit Me With Your Best Shot

Hit Me With Your Best Shot

Today is a bit of fun.  Which of course makes today no different than any other day at The Art of Doing Stuff.  Unless I lose a contest.  In which case it’s a little bit of hell for each and every one of you for a few days.  Flying Monkey’s hell.   It’s also hell when someone leaves a stupid comment, but that hell is usually reserved for the person who left the comment.  And anyone who agrees with them.

So, onto the fun!  The other night I mentioned to the fella something a reader in Australia had said. He said, Australia? I said, Yes. The place where kangaroos run wild and everybody looks like Elle MacPherson.   Everyone think’s they’re from England.  That place.  At which point he said, “Have em send you a picture of a mailbox“.

Then I thought about it for a bit and decided.  Hell.  That’s a pretty good idea.  I have no IDEA what an Australian mailbox looks like. Or one from England really.  Or Guyana or Costa Rica or Mexico, or Spanish or Italian or … you get the picture.  Or I hope you will.

One of the most fun parts of having a blog is being connected (albeit in a rather tenuous way) to people all around the world.  I can’t tell you how odd and amazing it is to get an email from someone in Germany who says they just made your soup, or stump table, or laughed at something you wrote.

It’s certainly more fun than dealing with a daily commute.  Or an office gossip.  Or worse.  The office “know it all”.  Uch.

It’s been a while since I worked in an office, but … her name was Cindy and the term originated in Middle English around 1450.   And was spelled “slutte”.

So if you’re still following me you may have figured out what I’m going to suggest here.  I’d like you all to become sluts named Cindy.  No.  No, that is not what I want at all.

What I DO want is pictures of mailboxes.  Not your personal mailbox … the letter boxes that are used for your country.  You know, for when you go to mail a letter.   I want as many mailbox photos from as many countries as possible.  Just take a picture and send it to me at karen@theartofdoingstuff.com.  Next Friday I’ll post the best mailbox pictures.

I’m hoping to have at least 10 different countries.

There is absolutely no reason for this request, no prize and no sane reason to do it actually.  Other than it seems like fun. 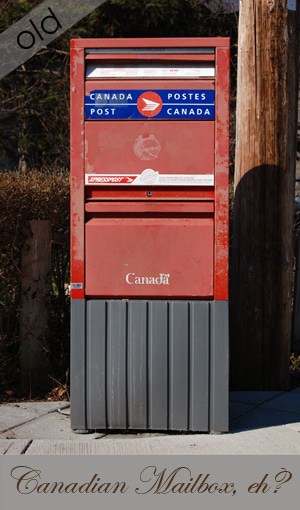 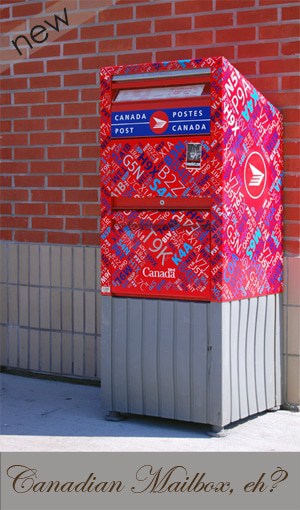 The “new” Canada mail box was designed this way to discourage graffiti.  Can you classify it as bona fide “graffiti” when someone spray paints a dink on a mailbox? Anyhow, they’re also made with a teflon like laminate that prevents spray paint and permanent markers from sticking to it!

Now it’s your turn.  Get your camera, get outside and hit me with your best shot.  (send photos to me at …  karen@theartofdoingstuff.com)

Have a Good Weekend!