Home » My Life » Me » How the little lost cat Sugarbear found a home.

How the little lost cat Sugarbear found a home.

I try to do good with this website of mine. Can I be crass, bitchy, impatient, rude, or sarcastic? I sure hope so. But the goal is to entertain and inform. And to get you off your asses and get you doing stuff. To make a change. To have an impact.

I get so excited when people say they’ve cooked something of mine and loved it, or that they got chickens because of me, or they attempted to repair something around the house they’d normally ask their husband to fix.

But I think what happened last week may have been the greatest thing this blog has ever accomplished.

I found a home for a stray cat that undoubtedly would have died otherwise.

The cat I dubbed “Sugarbear” has found a home.

Last week I posted about Sugarbear; a cat that’s been roaming the neighbourhood for the past few months. She is the nicest, sweetest, most affectionate cat I’ve ever encountered. Even after having lived on the streets. Even after having no food. Even after being covered in fleas and scabs and wounds.

Every day for the past 3 months she’d walk up onto my porch, roll over and offer her belly to whoever happened to be around. As time went on and the neighbours and I realized this little cat really didn’t have a home, we took to feeding her and giving her what she needed most; attention.

It then became a mission to find this cat a home.

We both looked into shelters and the SPCA, but the SPCA never got back to me and the shelters were full to the gunnels with cats. So we started asking friends and family. Church members, grocery store cashiers, random people walking down the street. Do you want a cat? Hey LADY. You with the cat sized dog … wouldn’t you like an actual cat?

I knew the second anyone met Sugarbear they’d want to keep her.  Even one of my sisters who has never owned a cat, has no interest in cats and is also allergic to cats considered taking her.  THAT’s how nice a cat Sugarbear is.

So when I posted about her last week I hoped Sugarbear would finally find the home she deserved.

At 10:00 a.m. last Tuesday, the morning the post went up,  Karla emailed me.  The mother of 2 was over 2 hours away but she loved Sugarbear based on her picture.  Karla used to own a cat but she had to give him up for adoption when the cat became aggressive towards her newborn baby.  Her vet said it was for the best.  Her vet said the situation would only get worse, not better.  Her vet convinced her.  So Karla gave away her cat and has regretted it for the past 7 years.

But she didn’t feel she had a choice.

So when she saw Sugarbear she knew immediately she had to have her.  Because Sugarbear looked exactly like Max, the cat she was forced to give away.

24 hours after that initial email, Karla was standing on my front porch to pick Sugarbear up.

My neighbours had to bring Sugarbear into their house overnight so we knew where the cat would be when Karla showed up.  Stray cats have a curious habit of … roaming … so when she came for her nightly feeding they just opened their back door and Sugarbear walked straight into their kitchen where she spent the night curled up on the kitchen table.  And then the kitchen floor.  And finally the kitchen chair.

I walked Karla over and she met her new cat.  It was love at first sight for both of them.  I couldn’t have picked a better owner for Sugarbear. 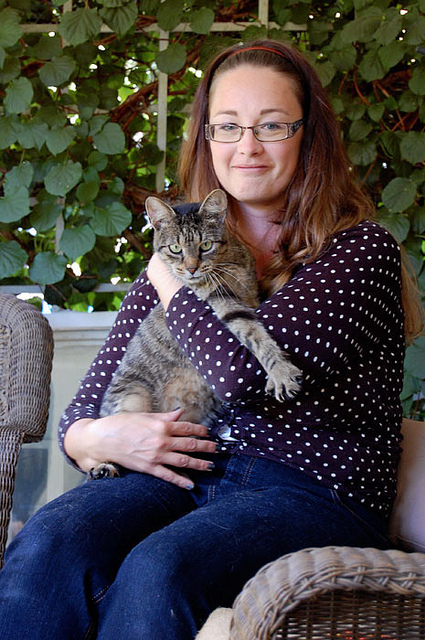 After a 2 and a half hour drive, a 15 minute meet and greet with the cat, Karla was back in her van ready to take the cat home.  In less than 24 hours she managed to arrange a 5 hour road trip, get a cat carrier, and book a veterinary appointment for Friday. 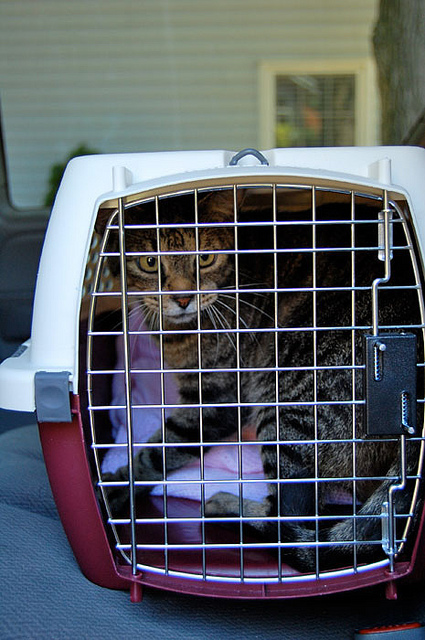 They made it apparently.  According to Karla the cat napped, talked and lost her lunch twice.  Which by her standards was quite a success. 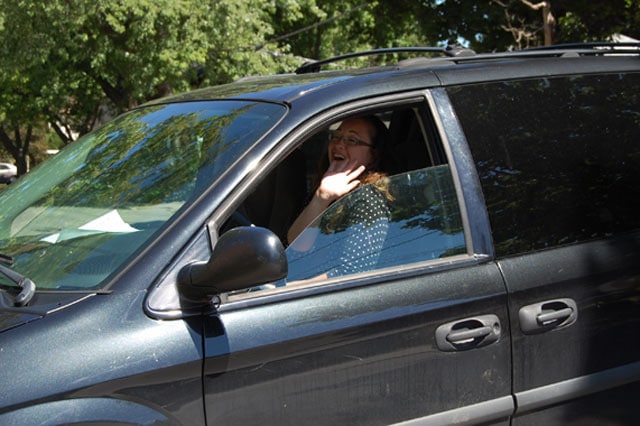 A small price for the cat to pay in exchange for what is going to be a happy, happy life for her.

Oh!  And before she left Karla told me what she was going to name her new cat.   Curled up on my neighbour’s kitchen floor with her new pet, Karla looked up at me and said, Her name is Sugar. 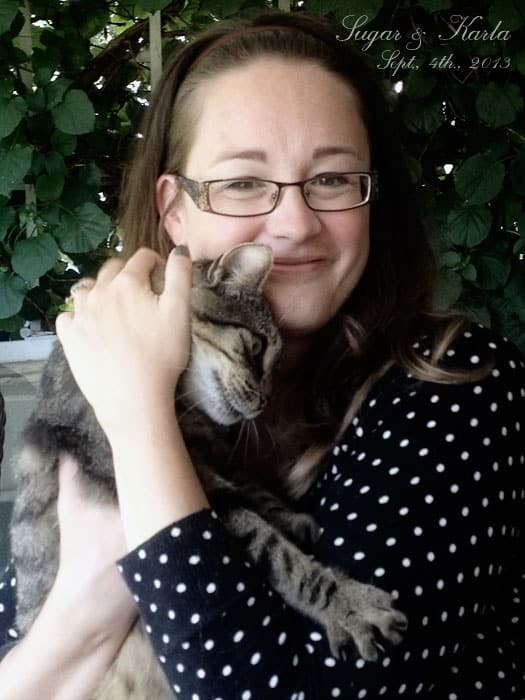 update:  Karla says Sugar is happy as can be.  And as it turns out, Sugar isn’t a she.  She’s a he (with a couple of parts removed).