Hi there! Does your turkey look perfect when you take it out of the oven and then like it was attacked by Wolverines by the time it makes it onto the serving platter?  Here's how to carve a turkey with minimal effort and maximum visual impact. 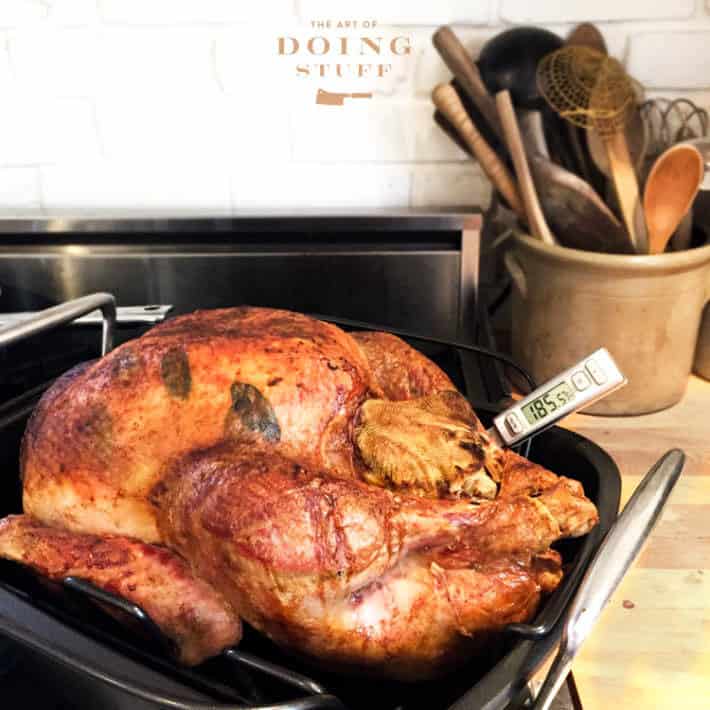 On television, families are always shown serving their entire, whole turkey on the Thanksgiving table.  The cardigan clad father stands over it, 2 tined prong in one hand and a carving knife in the other.  Ready to pierce through the crisp skin of the turkey into the succulent meat beneath as the whole family looks on.  Waiting.  And starving.

Whenever I celebrate Thanksgiving, the turkey is kindda throw on the table in a lump, it's occasionally dry as opposed to moist and someone inevitably ends up with mashed potatoes in their hair.  And sometimes one of the fathers at the table is drunk.  But we don't have to wait for anyone to carve.  As soon as the food hits the table, it's ready to eat.  But ... it's not pretty.

So several years ago I started copying how my one sister carves her turkey at Christmas.  Oddly it's the sister who doesn't really like cooking.  Holiday meals always seem to go smoothly at her house (except for the time her fingernails caught on fire, her son threw up from overeating and someone ended up wearing underpants on their head).

I can only assume her dinners go so smoothly  because of the way she carves her turkey.

Carving your turkey this particular way allows you to present what appears to be a whole turkey on the table, when in fact it's a completely carved, ready to go turkey.  Cuts down on the risk of having a drunk carver with a sharp knife in their hand.

How to Carve a Turkey 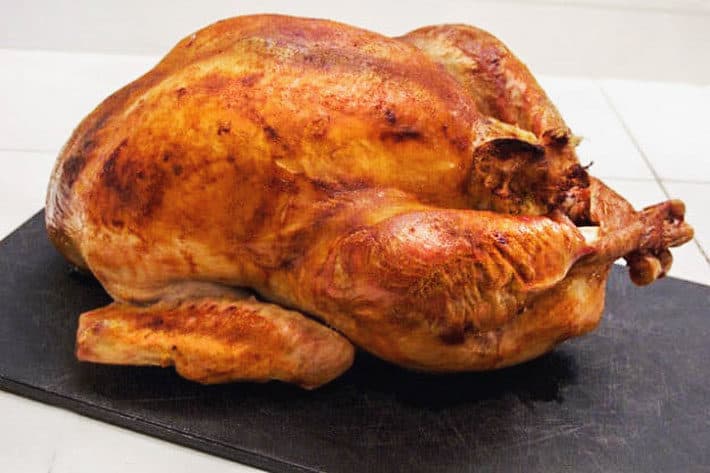 Line your turkey with cheesecloth so when it comes time to remove the stuffing you can just pull the bag out! 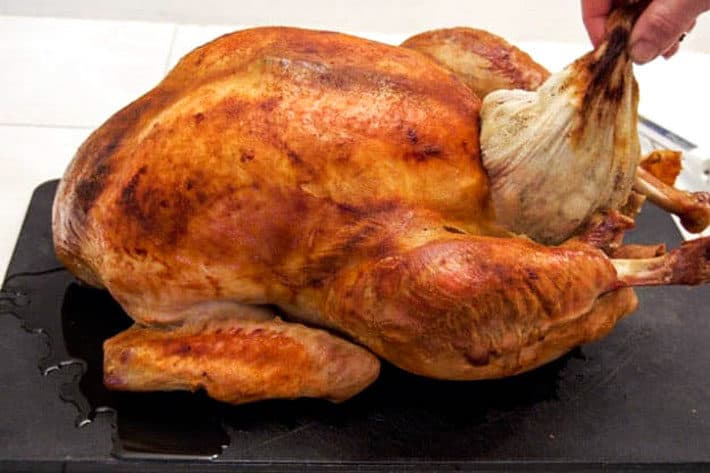 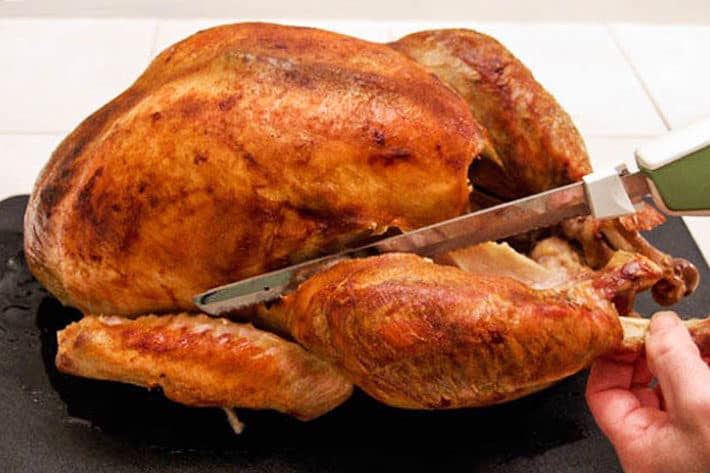 2. Now you're left with the thigh meat on the turkey. Remove that using the same method.  Cut around the meat, then pop the joint. 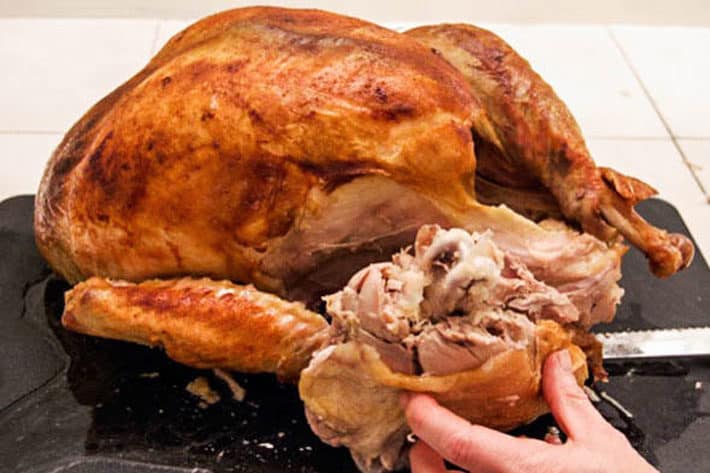 At this point your turkey should look like this ... 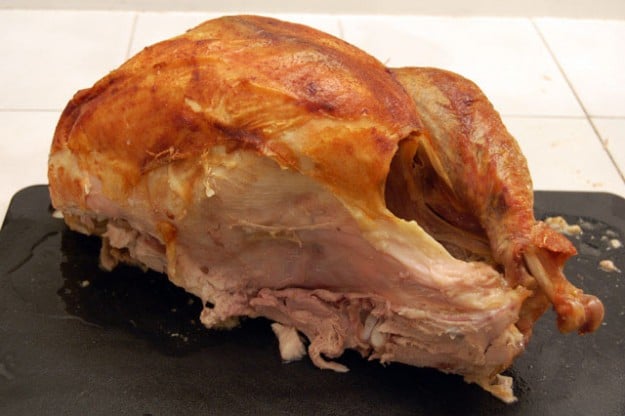 4. Now slice down the breastbone, keeping close to the bone, to remove the entire breast.

Stuff both ends of the turkey.  The butt and the neck.  More stuffing equals more happiness. 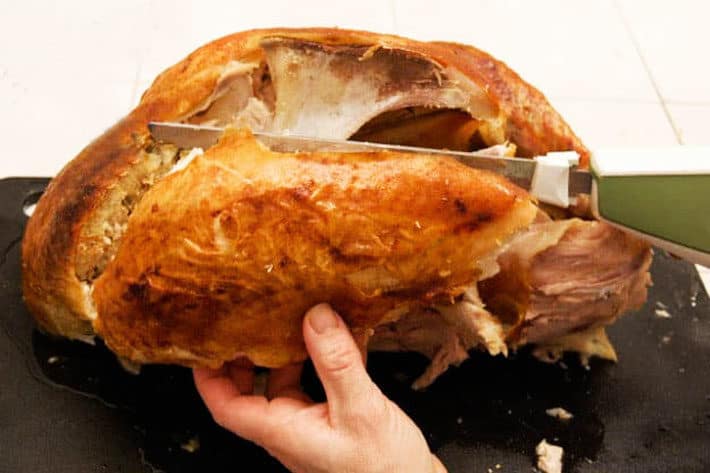 You now have all the parts off the bird.  (do both sides, you weirdo ... I just showed you the one side for demonstration purposes)

Take your breast and admire it for a while.

Then put your turkey breast on the cutting board and slice it like so ... 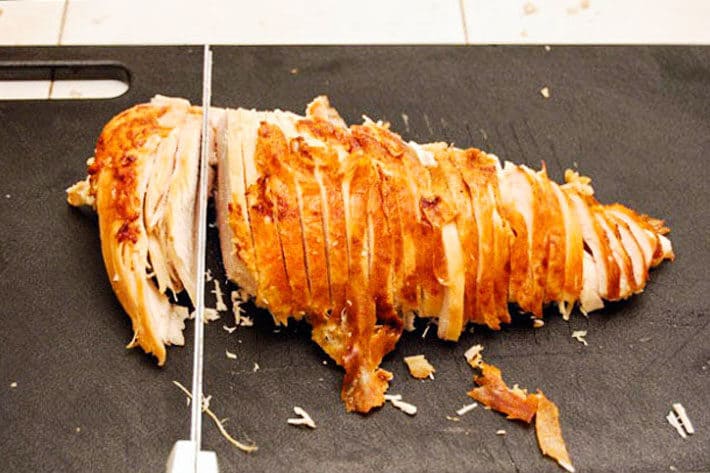 Do the same with the meat from the thigh.

Now's the fun part.  Start piling it on the platter.

You need something for all the parts to rest on so first fill your platter with stuffing.  Then you can lay down all the bits of thigh you cut and any remaining meat you can get off the carcass.

You're creating a mound which you'll rest the larger turkey parts on.

Then, picking them up with a long spatula, carefully lay your breast slices on either side of the stuffing.

Next place the wings and add the drumsticks on the end.  I've also included the neck/breast portion of the bird which when you cut it off is a sheet of skin, filled with stuffing. 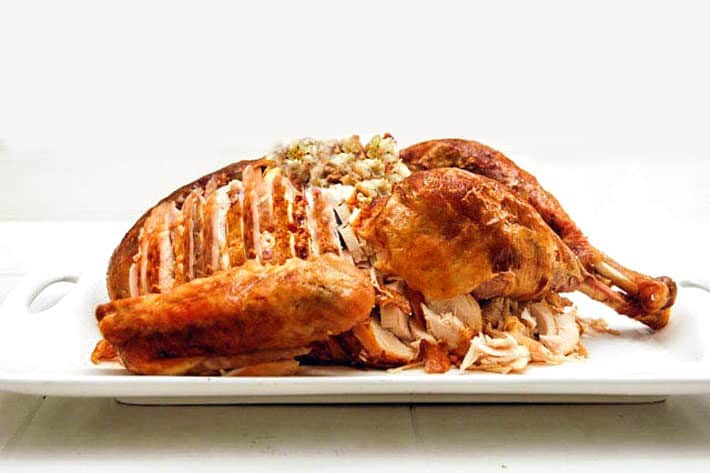 I didn't spend a ton of time making this platter of turkey look perfect because I didn't want to show you something you wouldn't be able to recreate.

You could spend a lot more time assembling it so it looks spectacular.  But ... it's Thanksgiving.  The cranberry sauce is on the stove, the potatoes aren't mashed yet, you have to make the gravy and Uncle Jack is getting drunk again. Not to mention the fact that your own wine glass seems to be empty.   So ... you might have other pressing matters to attend to. 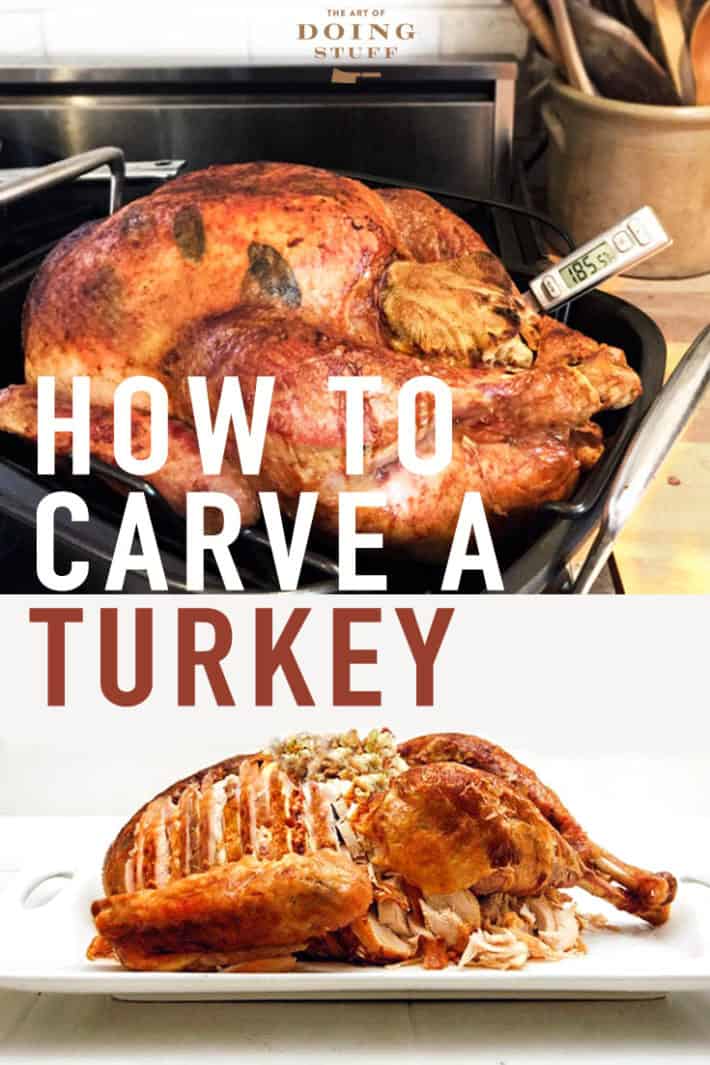