Home » Tips » Fixing » How to fix a broken computer/phone charger.

How to fix a broken computer/phone charger.

Here is my general routine.

Wake up, make a coffee.

Immediately start working (this usually beings with going through all the comments and emails that came in throughout the night.  It also gets me out of doing the dishes from dinner the night before that are strewn across every available work space in the kitchen even though I only made a grilled cheese sandwich. Yep.  I must get to work immediately and therefore, regrettably, do not have time for cleaning up or doing other things I would like to avoid.)

Start on whatever project I’m working on for the day.

Go back into office to Photoshop those pictures.

Call my mom. Cry that I don’t have time to do my dishes in the hopes she’ll come and do my dishes.  No. She can’t. She has a full social calendar that involves avoiding doing my dishes too.  Something about quilting and gambling.  I stopped listening after the word NO.

There are 2 points to this story.  I don’t like cleaning up after cooking and I rely on my computer A LOT.

So when it exploded the other night you might say I was miffed.  If you were a Mormon.  If you’re anything other than Mormon you’d say  I went batshit crazy with a side dish of f*cked.  My computer is my life.  Literally.  It is how I make every single cent I make.  Sadly it isn’t so many cents that the thought of buying a new $2,500 computer doesn’t phase me.  It does phase me.  It phases me a LOT.

Once it cooled down I plugged the computer back in again only the have the charger do nothing.  It didn’t charge.  So I pulled it out and took a good look at my charger.  It was frayed and fried.

It wasn’t my computer that was fried. It was my charger.  Most of the chargers I own seem to separate where the actual plug is.  I don’t know if this is just with Mac products or if all chargers have this problem, but I did know I didn’t want to spend $70 or so for a new charger.

So I fixed it.

And you can too.

This is a really common problem with chargers.  The wire gets pulled, twisted and bent until it finally separates from its connection inside the plug.

You can see how this has happened on my charger below. 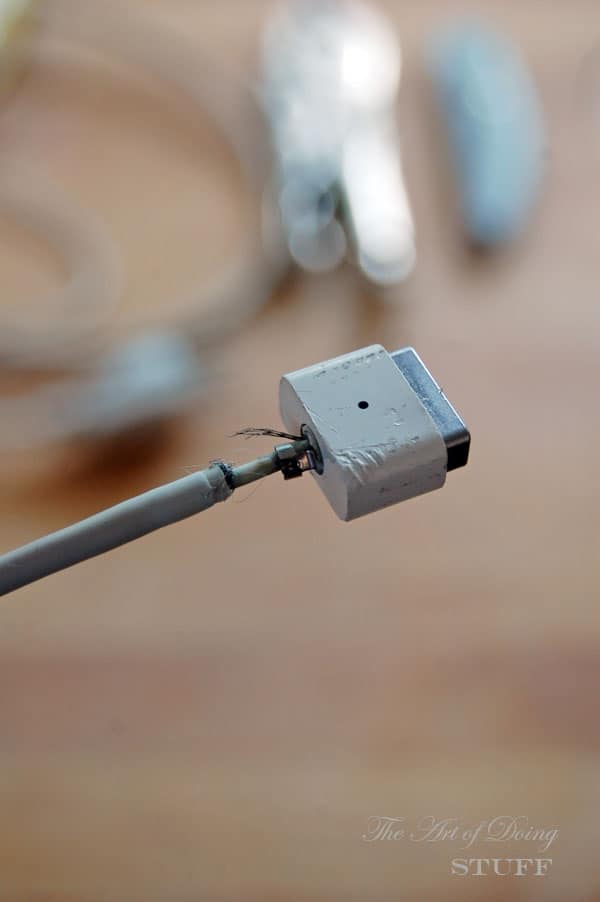 To fix it (and you can’t break it any more if it isn’t working, right?) you have to remove the plug cover.  The pretty white thing. 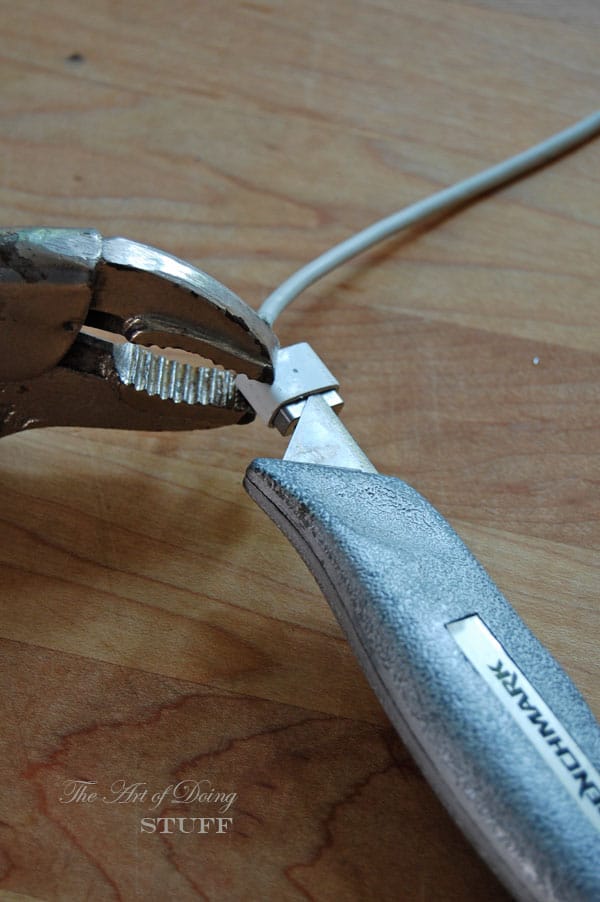 I used a set of pliers and a box cutter to carefully cut the covering off.  I used the pliers to hold the plug in case the knife slipped.  It only takes me 2 trips to the ER to learn my lesson. 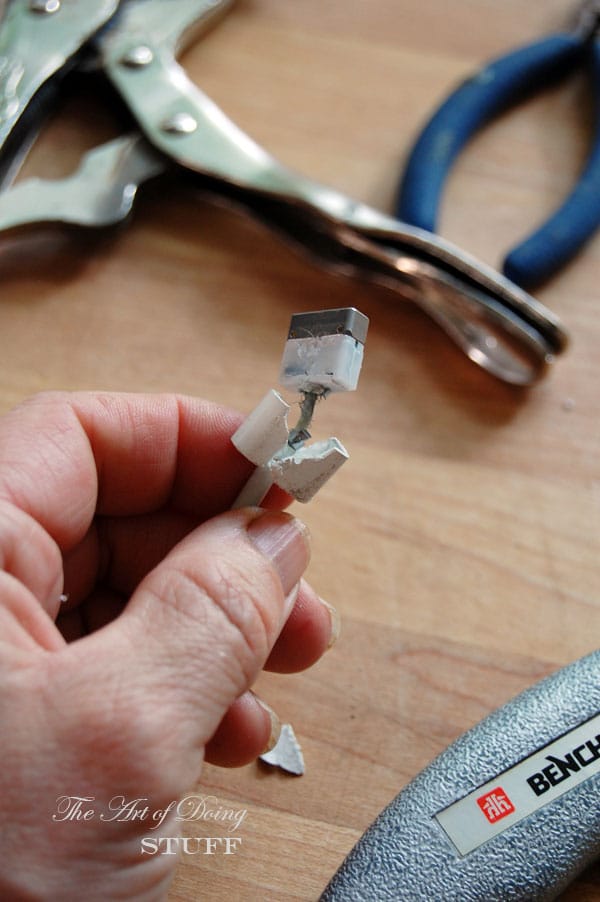 Once you get the first white covering off, there will be another one underneath.  Be careful removing both parts. You don’t want to damage the electrical board underneath. 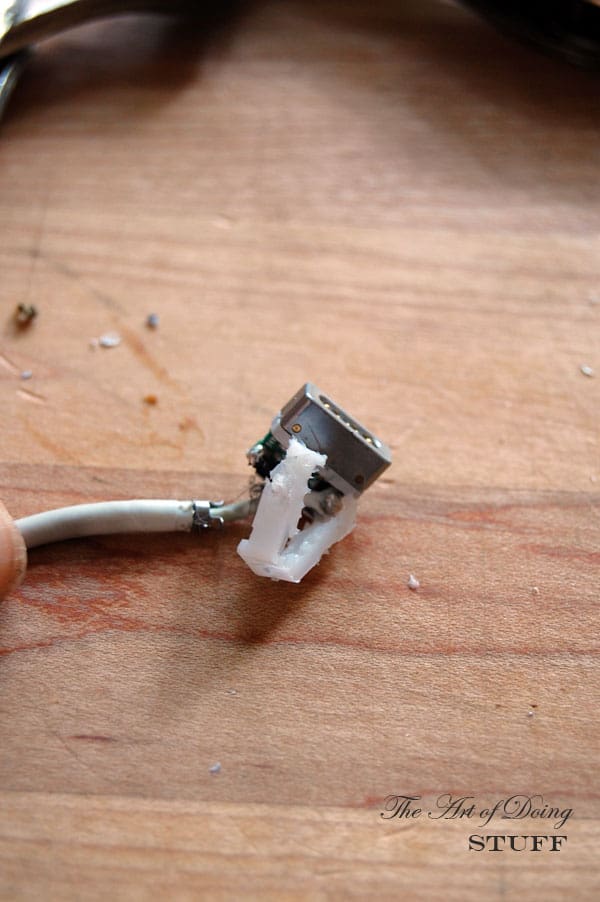 Once everything is off you can see the guts of your plug.  In this case you can see where the white wire is attached still on the right of the electrical board, but the black wire on the left has frayed off. 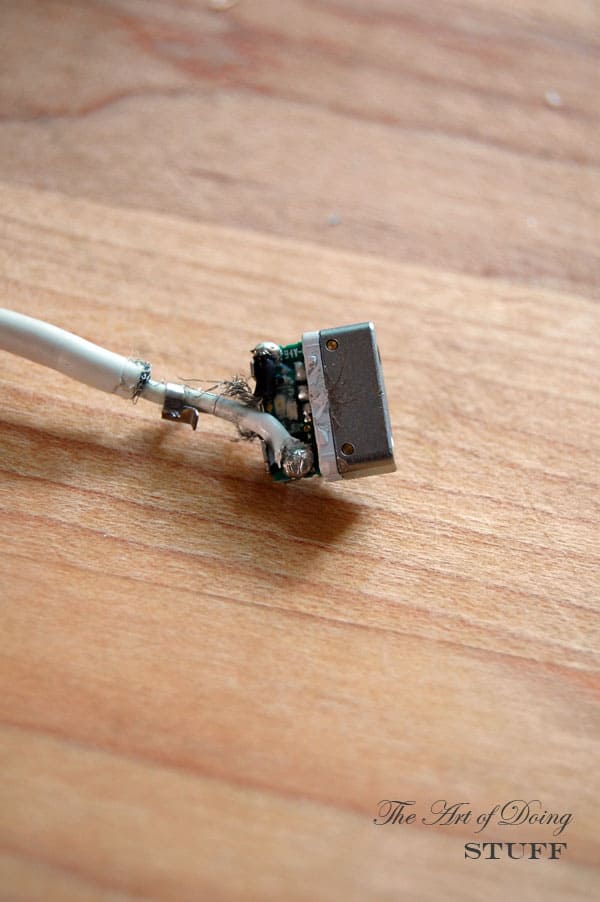 If your wire has separated like this, just put your fingers at the bottom of your wire sheath and pull it towards the plug. This will stretch the sheathing (which holds the wires you need) up closer to the plug.

Now using wire cutters or whatever you have on hand, take about an inch of the sheathing off. 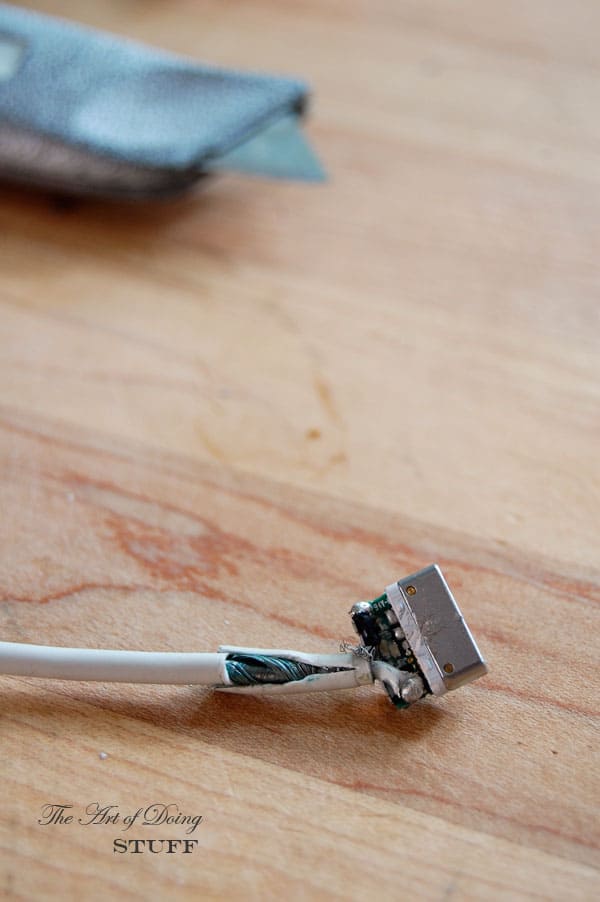 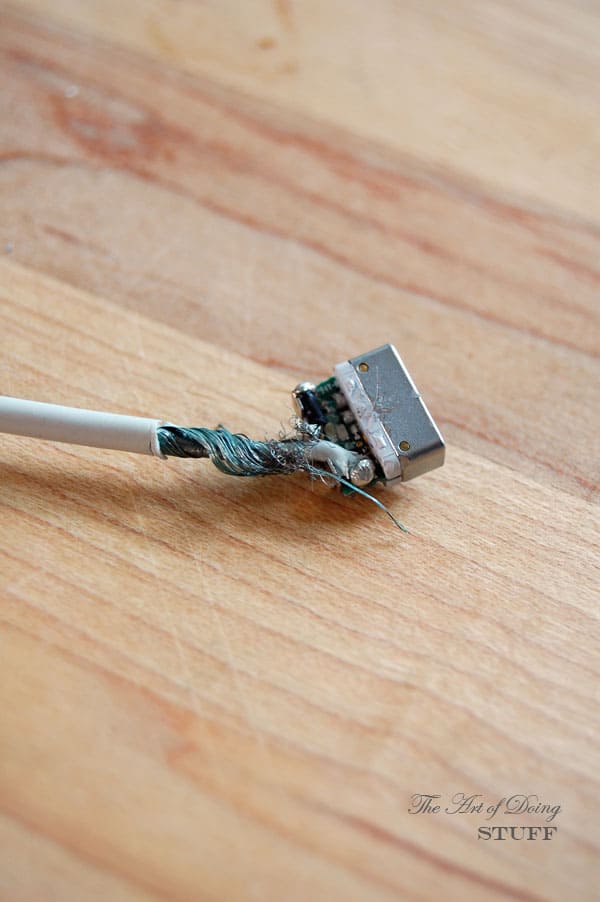 Unwind these bare wires and then twist them together. 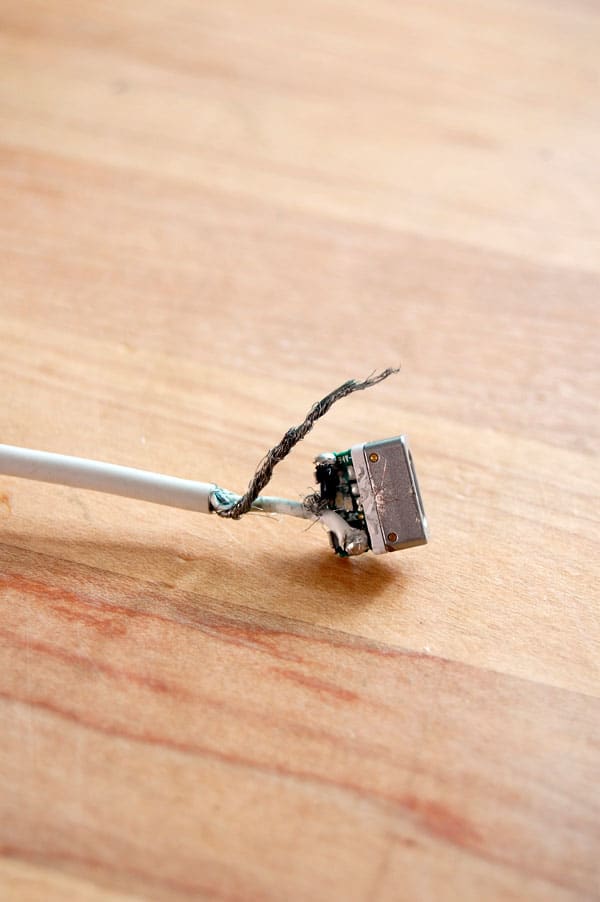 If you have enough wire left on the terminal, twist it too. 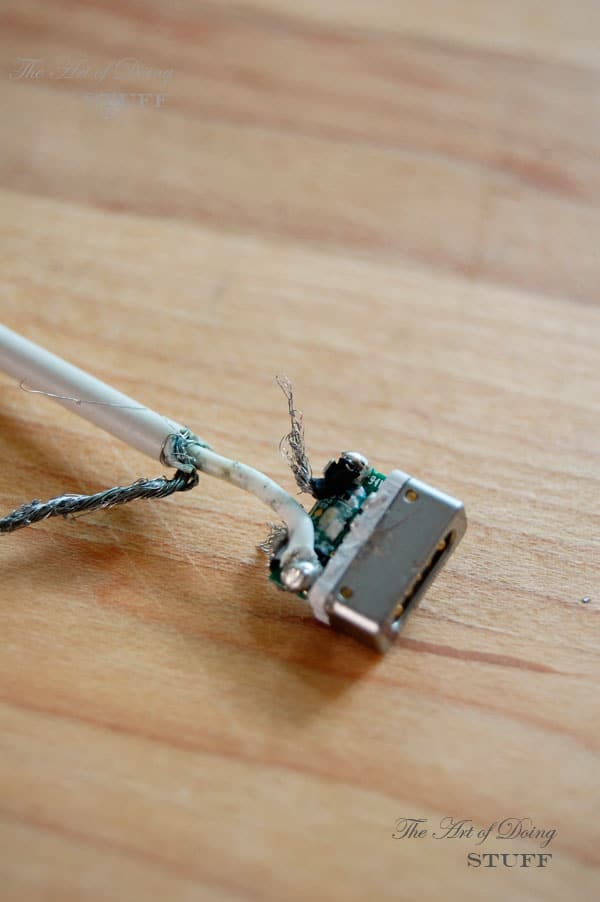 Then twist the two together, making sure there aren’t any bits of wire left out in the open, touching anything else. 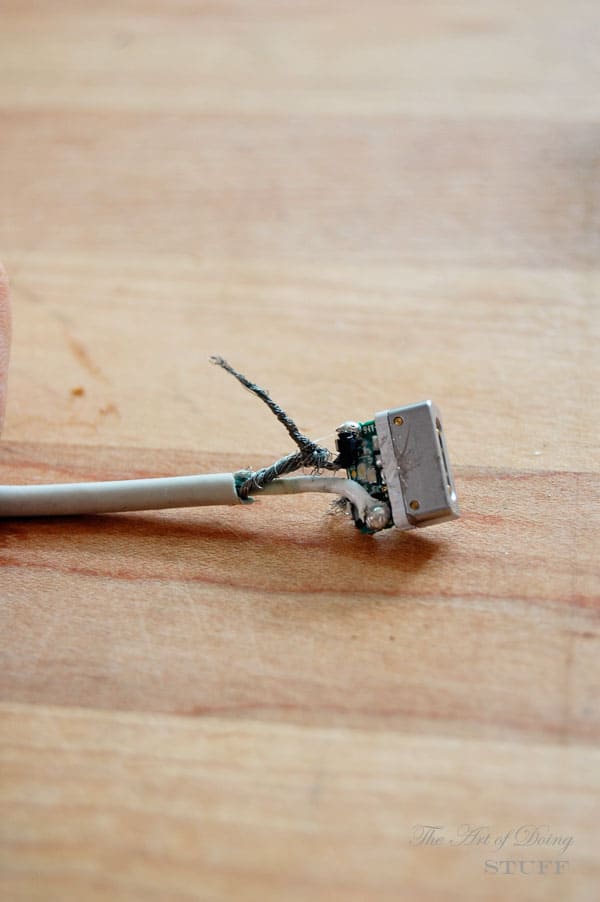 Now plug it in and see if it works.  If the charging light comes on, you’re good. 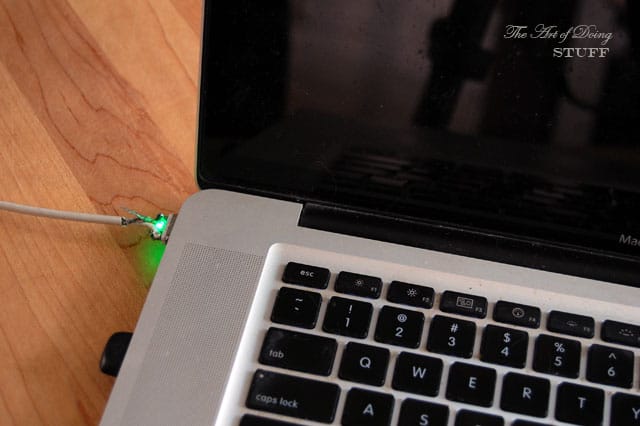 Because there are bare wires, unplug the charger from the wall first, so there isn’t any power, and then remove the plug from your computer or phone.

Twist your wires together well and neaten them. 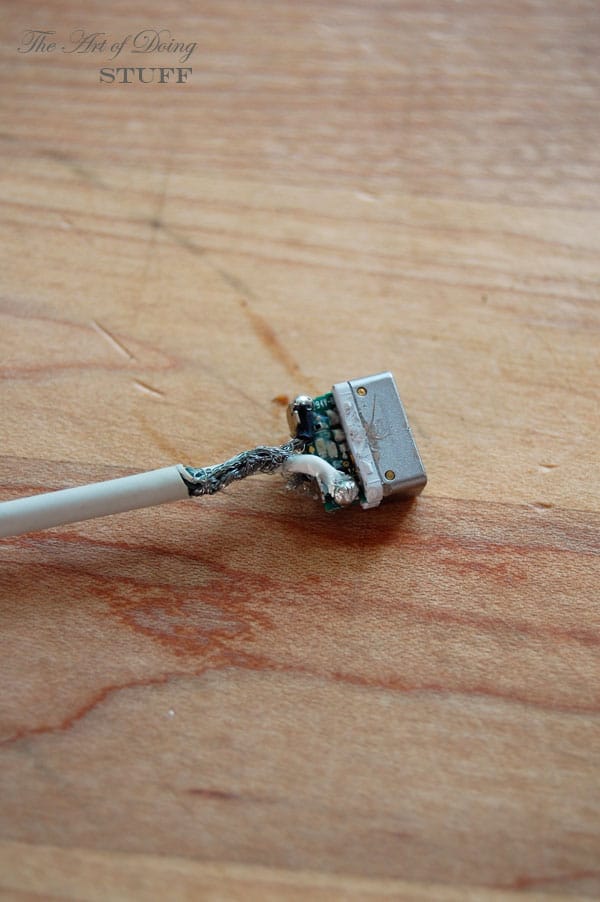 Wrap everything in black electrical tape (or equivalent) so the wires can’t move and none are exposed. 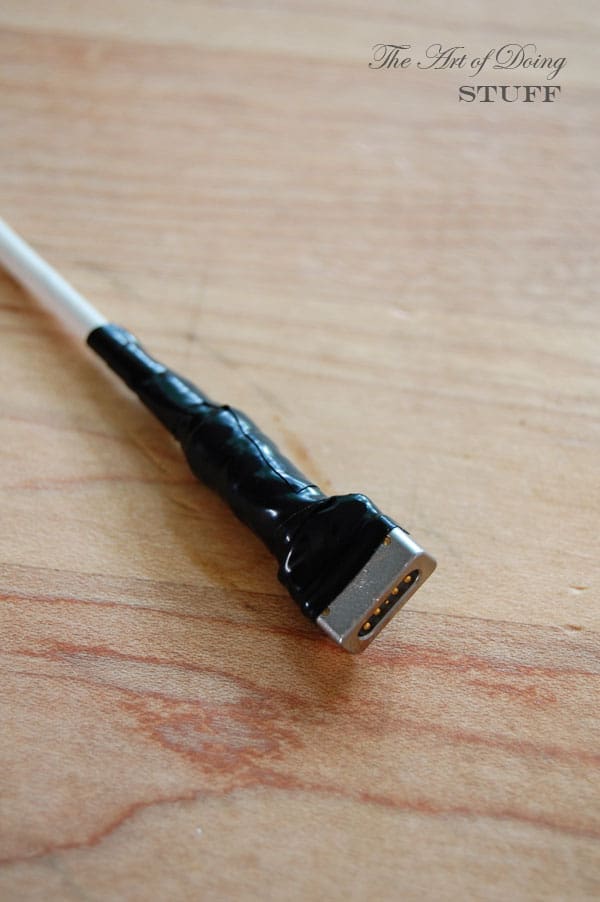 Cut a small hole in the tape so the light can shine through letting you know that your charger is still working. 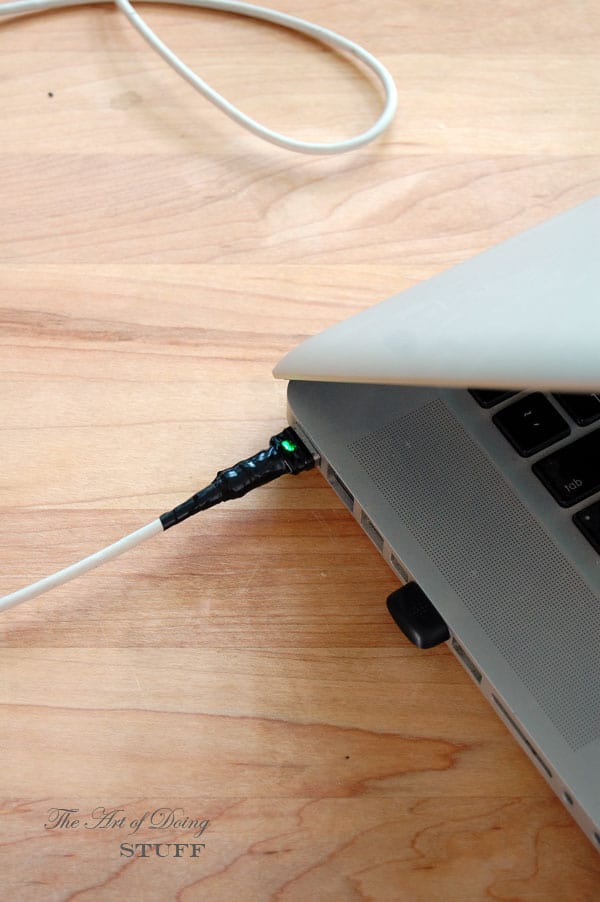 If you don’t have enough wire coming off of the terminal you’ll have to solder the wire back onto the plug.  DON’T FREAK OUT!!!  It’s easy. It’s very, very easy and you can buy a soldering iron 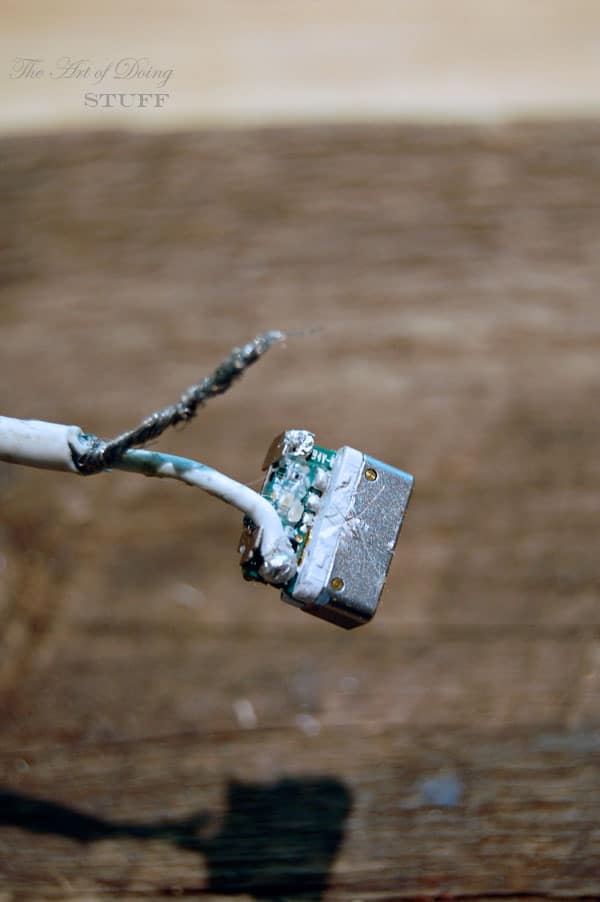 Here we go.   All you need is your soldering iron and some solder. 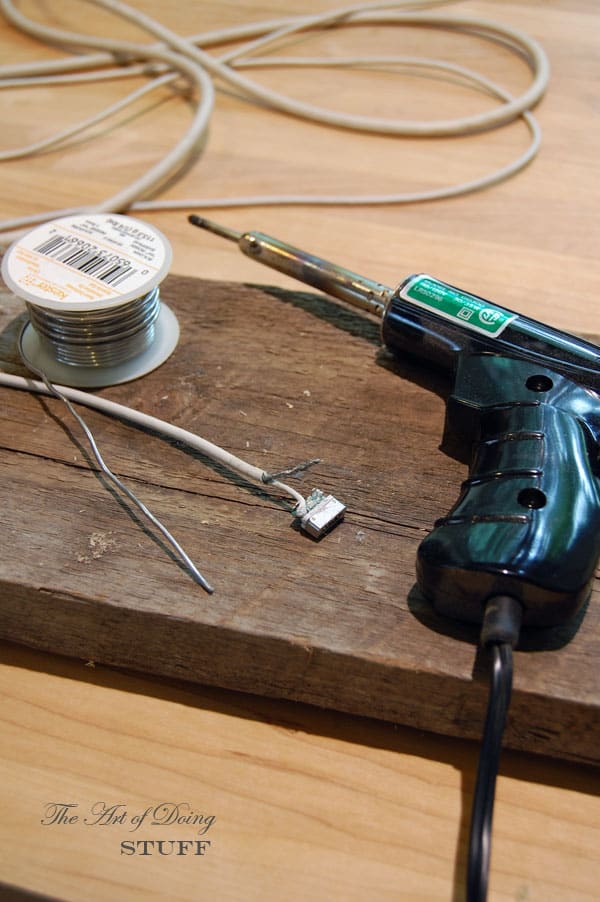 For the record I am a terrible solderer.  BUT I can solder well enough to do this, and if you have enough intelligence to use the bathroom on your own so you can you.

After heating the gun up, touch the tip of the soldering gun to the end of your solder. 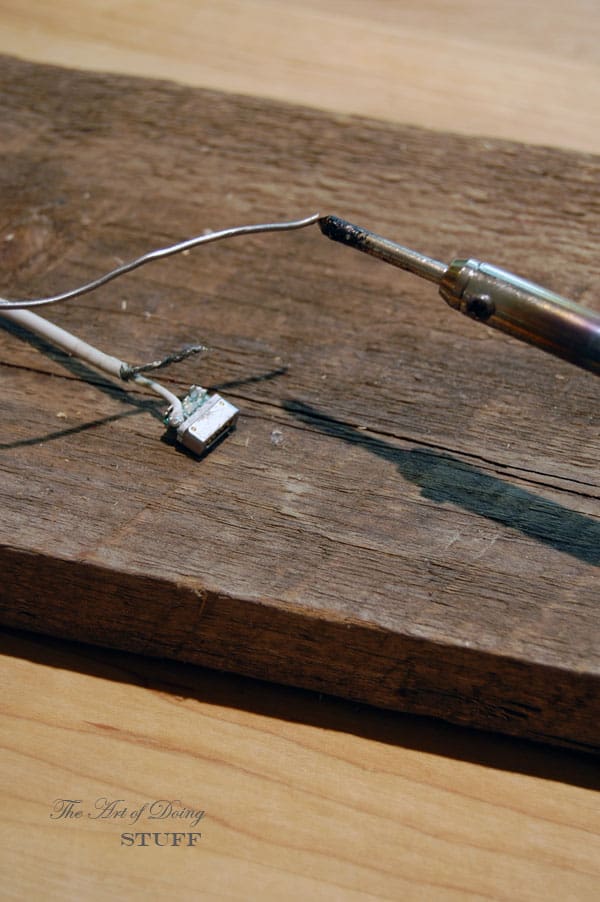 A small bead of solder will melt and attach to the soldering gun. 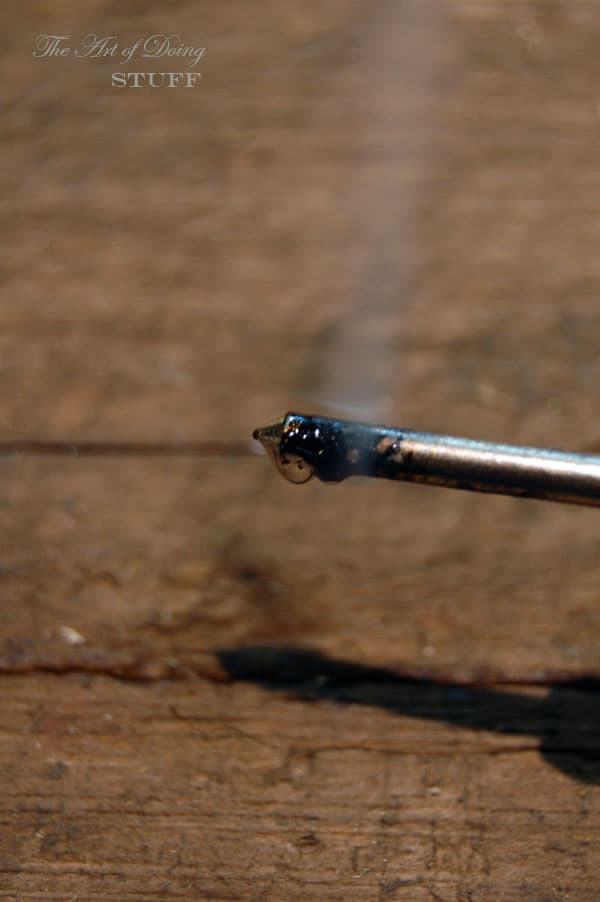 Make sure your wires are pushed onto the tiny metal spot where they were originally attached to and drop the drop of solder on top. 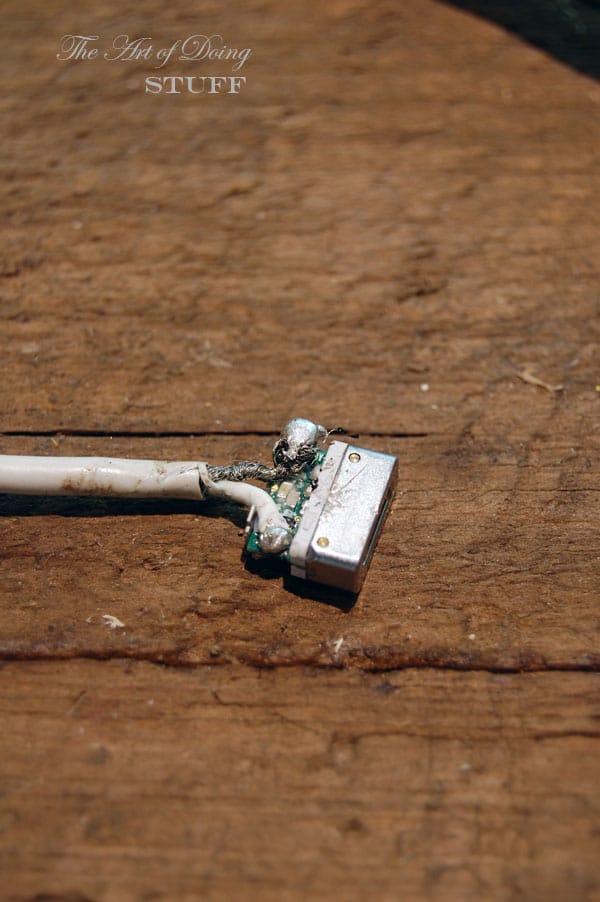 You can neaten it up with a few more drops.

Wait for the solder to harden and cool then plug it into your computer.

A glowing light means you’ve soldering properly and you could probably run for Mayor. Because you’re that good. (clearly all Mayors need to have soldering skills) 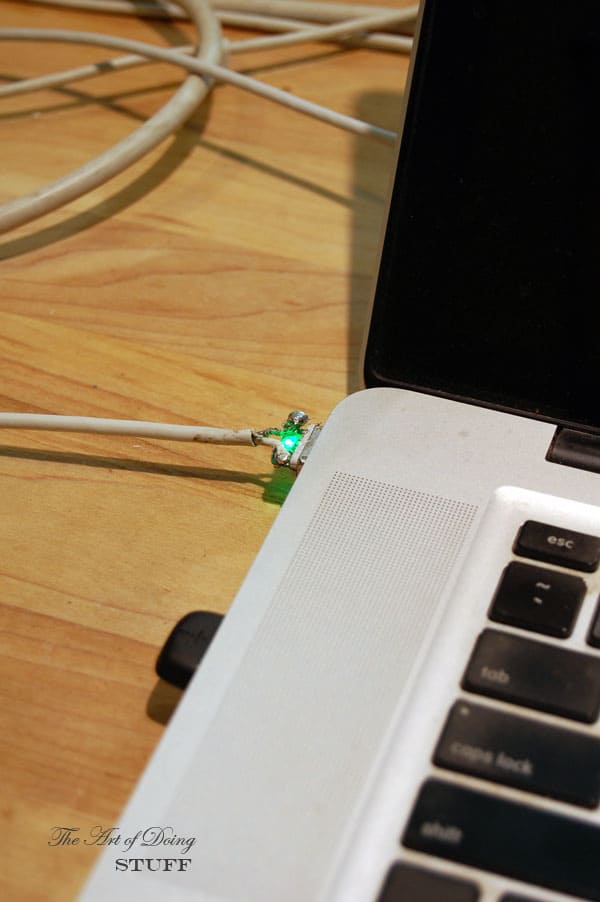 Now remove the plug the safe way I described earlier and wrap it with electrical tape. It’s ready to go and should last a long time.

This process takes anywhere between 10 minutes and 14 hours depending on how many dishes you’re trying to avoid doing.