Home » My Life » My Family » How to make friends & influence people. With pie.

How to make friends & influence people. With pie.

Have you ever met someone who you like instantly?  I’m sure you have, it happens to everyone.  For whatever reason, be it karma or looks or even the way someone  holds their head … you just like them immediately and picture yourselves being friends, laughing and crying together for as long as you both shall live.

And then you leave The Gap and realize you’ll never see Mindy again and she didn’t even give you the right change.

The opposite can, and does happen too.  I don’t care how nice a person you think you are, there’s always going to be someone whom you dislike immediately.  They don’t have to do a single thing … you just do NOT like them.  All of your friends can try to convince you how great they are, how well you should get along (always a sign you’re going to despise someone) and how they never did anything to you.  They didn’t have to.  Your gut just tells you even though they’re  supposedly a good person/funny/trustworthy/helpful/a nun/whatever … you just don’t like them.

And there is absolutely no good reason for it, but you have every reason to not like that person if you don’t want to.

But all bets are off when someone doesn’t like YOU.

You’ve been there.  You meet someone for the first time, you pleasantly say hello and the ooze of hatred coming off of them splats all over your face.  They’ve just projected hate-gob on you.  This person doesn’t like you.   THEY DON’T EVEN KNOW YOU!  You love kittens and cookies and you’re charming and funny and loveable.  But they don’t care.  They don’t like you.

I’d like to introduce you to someone who doesn’t like me. They have no idea I’m doing this and frankly I don’t care.  Sometimes you just have to call a person out on these sorts of thing.

I should preface this by saying I’ve done nothing to this person, I’ve tried everything I can think of to make her warm up to me but nothing, NOTHING has worked.

She’s just cold and distant and very, VERY suspicious of me. 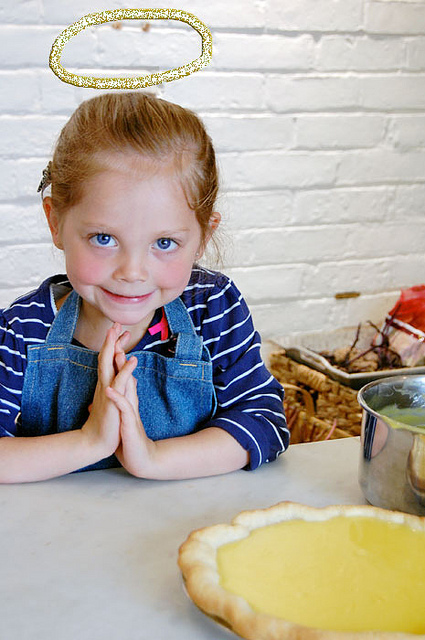 Don’t be sucked in by the whole looking like an angel thing.  She’s dangerous this one.

She’s my great niece. Or my second niece, or niece once removed.   Whatever you call her, if you meet her she has a looming presence you’ll never forget.  She’s like a cross between the cute little girl from Poltergeist and James Earl Jones.

One look and you know exactly what she’s thinking and she’s usually thinking   “I don’t need you, you need me, you’re desperate for my approval and you probably won’t get it.  I haven’t decided yet.  So keep trying. No I don’t want your stupid cookie.  Try again.”

It’s been like this since she was born.  And E’s mother (my niece) was exactly the same with me.  There’s a big age gap between myself and my older sisters so I became an aunt when I was 9.  So I’ve had several years of this whole “I don’t exactly hate you, but I’m going to scream like a lunatic whenever I’m alone with you”  thing.

I’m kind of a seasoned professional at it and just accept it for what it is.  Her mother got over it. E will get over it.  I think.  Thankfully I could just make sure I was never alone with her and therefore avoid the ear piercing screams.

Until one day last week when for the first time her mother (my niece) had a baby sitting emergency.  It coincided with a hair colouring emergency as is often the case.  I was the only one available to babysit that day.

Our family spent 2 WEEKS preparing for the event.  My sister, my niece, myself, we all came together with military precision to come up with a workable plan to trick the child into submission. .  We cajoled, plotted, planned and lied to her.  Nothing worked.  By the night before the big event, she was still refusing to cross the threshold of my house.

Hey E, heh, heh.  I sure could use some help in the kitchen tomorrow.  (inner shuddering, quite a bit of sweat coming from strange places).  Yeah. Baking.  Because I bake.  But I need a baker’s helper.  Well, an apple pie is what I was going to make actually.

Note that I had prepared the entire kitchen and laid out all the accoutrements necessary to make a true pie.  An apple pie.

Yeah, no.  She didn’t like apple pie. I could keep my apple pie.

Then her mother (who through sheer luck this tiny child happens to like) asked what kind of pie she did like.

Well, O.K.  We could change it up to a Lemon Meringue pie I guess.  Do you think you could come over and  help me make that tomorrow? I promise not to look you in the eye.

Now it was a flurry of checking for ingredients, asking her to remember to bring her apron and telling her we were going to have FUN.  She picked out her apron that night but seemed a bit cynical about the prospect of having fun with me. 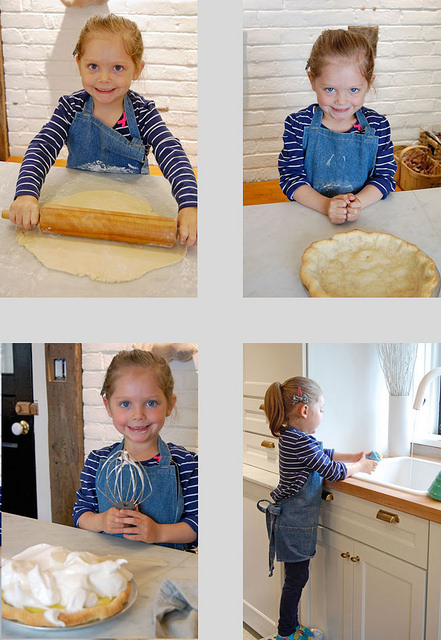 And I mean I really taught her.  She didn’t just mix the ingredients, she did it all and I let her.  I was ready to let her make all the mistakes necessary as long as it kept a smile on her face.

She made no mistakes.  This little volcano was born to bake. 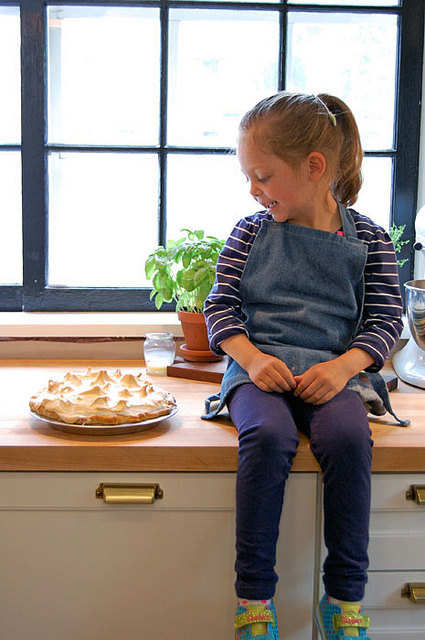 So that’s all it took to break her walls down.  A pie.

That’s E on the left and her mother (around 25 years ago) on the right. 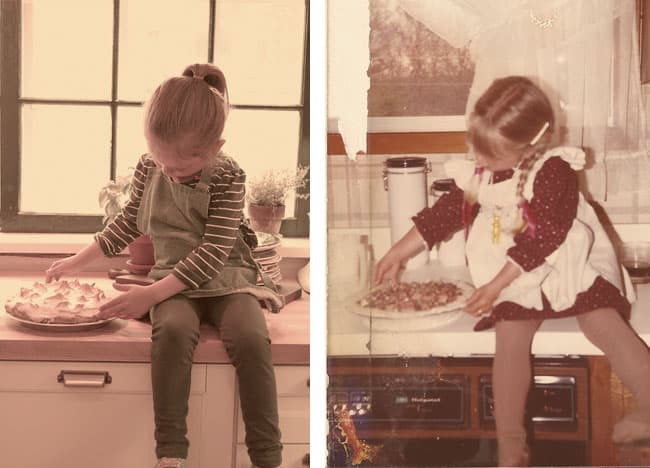 My words of wisdom here are simple. People won’t like you. It doesn’t matter how great you are. There will be some that just don’t think you’re as charming as everyone else does. You can either try to change their mind, or decide they’re not worth the effort.

Either way, you should probably bake a pie.