Home » Tips » How to Make Sure Your Amazon Prime Deal Really IS a Deal.

How to Make Sure Your Amazon Prime Deal Really IS a Deal.

Today is Amazon Prime Day (tomorrow too!).  Apparently this is an exciting thing. Here’s how to keep an eye on Amazon and know if you’re really getting the best deal possible. 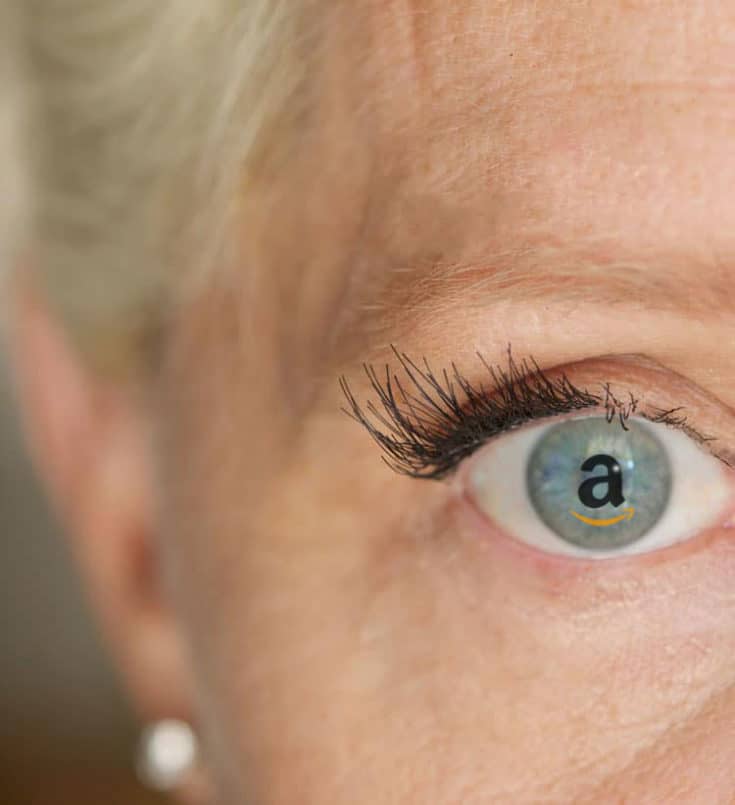 Honestly, until this year I never actually paid attention to Amazon Prime sales. Partly because – well, I’m not a member of Amazon Prime so there’s that, and partly because Amazon prices are so up and down. One day something is $15.99 and the next week it’s $10.  Or $45. Or $1, but $45 for delivery.

(Amazon Prime Day is a 24 hour sale on Amazon as a thank you to their Prime Members. This year however it’s 48 hours.)

If you aren’t constantly tracking or watching something you want to buy, it’s hard to say whether it really is a great sale or not. The trick I’m going to show you today works all the time on Amazon, not just during Prime Days.

As an example, this weekend my dryer started to sound like it was auditioning for the part of tortured ghost with a bladder infection in a B movie. So I went online and searched for pricing on a new dryer before this one tried to kill me.

One website I went to (not Amazon) had a suggested retail price of $1,500. But they were having a BIG SALE. I know this because the lettering was red and had cartoon fireworks coming off of it.  You would assume based on all the fanfare that this was a remarkable price.

But after visiting another store’s website I found the super-duper-you’re-a-troglodyte-if-you-don’t-buy-it price was actually … $200 higher than another store’s regular price.

Is Your Amazon Prime Day Deal a Real Deal?

So.  With Amazon Prime Days going on today and tomorrow (and my mother an accidental Prime member – that’s a whole other story) I wondered how could you make sure the sale was a good one?  That’s when I remembered …

This is not a sponsored post, just good old-fashioned information but if you do end up buying anything from Amazon I’ll make a commission.

Yep. Camelcamelcamel is an app or extension for your browser that will immediately tell you the history of the price of something on Amazon. It’s magical. The best part is it works on almost every Amazon site around the world (US, Canada, Germany …). It will give you a little graph that will show you all the prices that item has been over the past month, 6 months or even year.

I believe this was the first of its kind when it was developed several years ago, but now there are other options that do the same thing.  Keepa is a popular one too but it’s more involved and confusing to me than CamelCamelCamel.

I use the CamelCamelCamel Chrome extension for my laptop, but if you’re an iPad (tablet) or mobile phone user you can get the app.

I used this app a few years ago and then promptly forgot all about it until a few days ago. So I installed it and headed over to Amazon. I searched an Amazon Echo and saw that their price today is supposedly a GREAT deal. 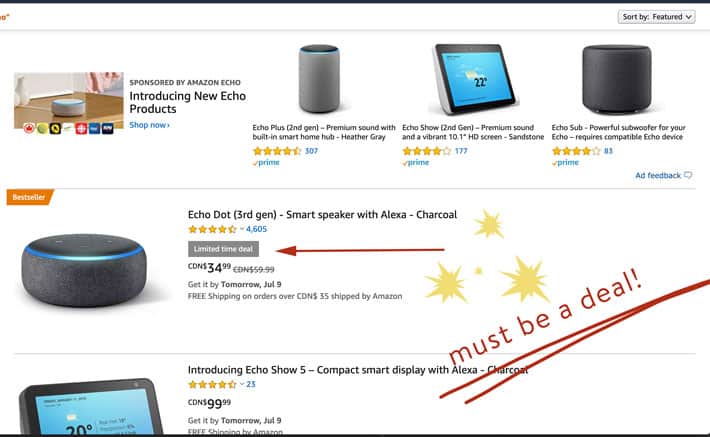 It said limited time deal and was listed at $34 compared to its normal price of $60.  Enter Camelcamelcamel to see if any of this was true.

This is what the app or extension will look like.  You just click on Camelcamelcamel to open it on whatever page you’re on and it’ll tell you the history of the price of that item. 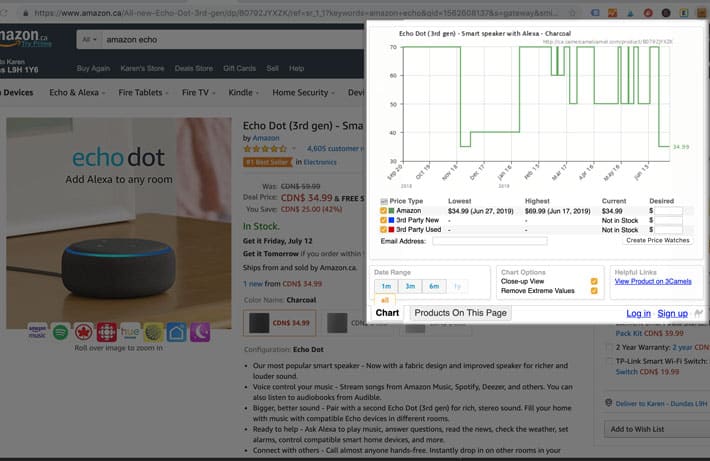 You can see the graph shows the highest this Amazon Echo Dot has been is $69.99 which was on June 17th of this year.

The graph also shows it occasionally drops down to $50 fairly regularly only to pop back up to $70.

But today’s price of $34.99 really IS the lowest it has ever been priced and WAY below the most common price of $70 for it on Amazon.

Now, I don’t actually want to buy an Amazon Echo but it’s a good example. And if you want to buy one, by all means go grab one right now at this price before it goes back up. 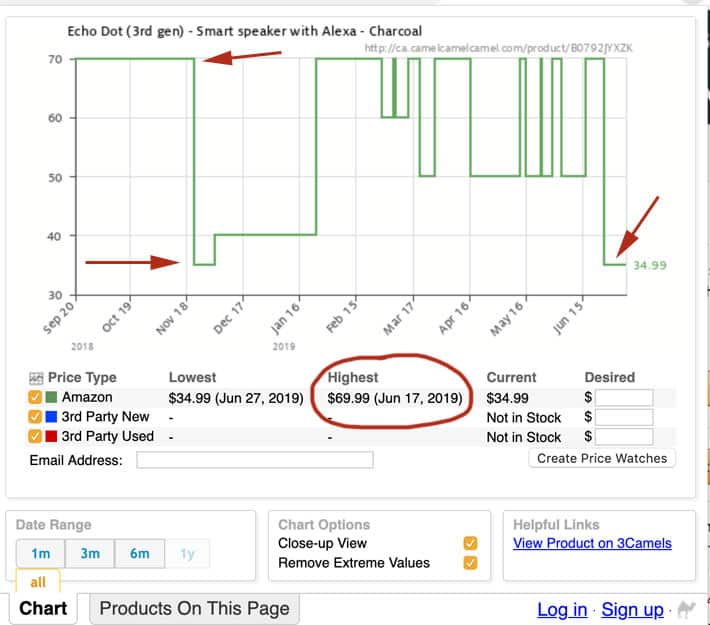 Amazon Prime days are known for good sales on most stuff, but GREAT sales on technology and electronics.  So I thought I’d list some of the techie things I own and love in case you’ve been thinking about buying any of them.  Now would be a good time to check to see if they’re on deep discount.

NOTE!  You can sign up for Prime for a free month right now and then cancel it to get all the deals today. But you have to remember to cancel your Prime membership otherwise you’ll get charged every month for it.

Arlo Wireless Security Cameras – These are the security cameras I have around my property. I used one of them to monitor and  video the robins nest in my window box earlier this year.  They images are good quality and reliable but best of all the cameras are wireless so you can literally stick them anywhere.

Kasa Smart Plugs – Turns your lights on and off with a phone app or set them up with a home device like an Amazon Echo or Google Home to turn on and off at certain times.

24″ Insignia Smart TV – I *just* bought this television for my kitchen a couple of weeks ago and I love it.

Sous Vide – I actually have the big Sous Vide Supreme (demi) machine but if I were to do it all over again I’d probably just get a Sous Vide stick. They do the same thing, are 1/4 of the price and take up 1/10th of the space.

The DJI Spark (My Drone!!) – I don’t claim to be a drone expert but I did look for one for a couple of years. I just knew I wanted one that was easy to fly, small and took really good quality photos and video. This is that drone.

Fujifilm X-T3 Mirrorless Camera – This is the camera I use for the majority of my photos. I got it in December. Note, that this is for the camera body only, not the lens.

* If you’re in Canada and the links aren’t bringing you to the right place just click here to go to Amazon Canada’s webpage and search for the item you’re looking for.

Good luck and happy Priming.  Personally I’ll be using my mother’s account (which I’m fairly certain you aren’t supposed to do) to check on whether my dream television the Samsung The Frame TV is on sale.

If it isn’t, I’ll continue to entertain myself by listening to my dryer.