How to Temper Chocolate.And form chocolates without molds.

When I was younger I fancied myself a bit of a chocolatier.  Thought I was pretty special.  Being a chocolatier and all.

Then I got into braiding polyester ribbons around wire coat hangers and chocolate was a distant memory.

I’ve learned a few things about making chocolate since then, which I am now going to share with you. 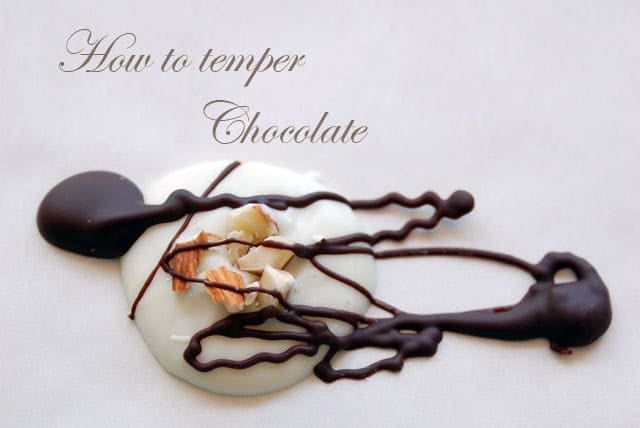 If you buy a chocolate mold there’s usually instructions on the back on how to use it.  Generally it says to melt your chocolate in a double boiler.  Once it’s melted pour it into the molds and then stick the molds in the fridge.  In 10-15 minutes you’ll have chocolate.

You just won’t have good chocolate.

Chocolate is a complex thing made up of complex thingees which I won’t get into explaining right now because it would require I open up a page on my browser to Google “organic makeup of chocolate”.  It doesn’t matter why it’s complex.  What does matter is that you respect the fact that it’s complex.

Because of this, chocolate requires a certain procedure while melting it to make it the best that it can be.

If you melt chocolate willy nilly and stick it in the fridge, what you end up with is soft, dull chocolate that will get a white coating over the top of it and possibly become grainy.

If you temper your chocolate during the melting process you will end up with smooth, shiny chocolate that cracks when you break it in two.

The untempered chocolate isn’t bad for you or rotten.  It just isn’t as nice.  It’s the sort of thing a kid would make and think they were a chocolatier.

If it isn’t in chips, chop the chocolate so it’s in small pieces.  This way it will melt quicker and more evenly. 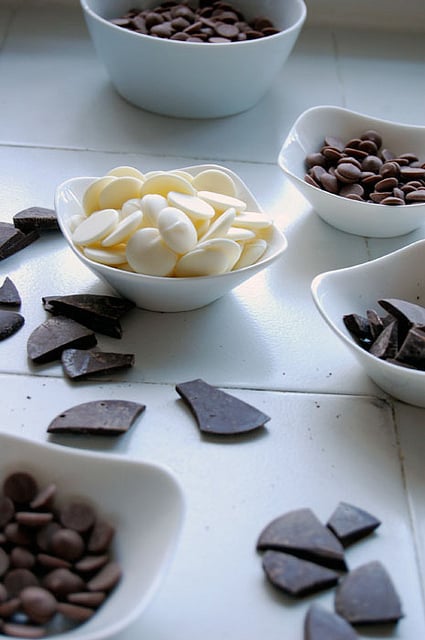 How to Temper Chocolate

Put an inch of water into the bottom of a double boiler.

Bring the water to a boil then turn off heat.

Place 2/3rds of your chocolate in top pot of double boiler and place on water filled bottom.

(reserve remaining 1/3rd of chocolate … this is your seed chocolate)

The residual heat is what will  melt the chocolate.

Keep stirring and stirring until the chocolate is melted and has reached the required temperature for tempering.

Immediately remove the pot with the chocolate, wipe the bottom of any steam or condensation.

Add your reserved seed chocolate.  This will bring down the temperature of your melted chocolate.

Stir and cool chocolate until it has lowered to:

Place pot with melted chocolate back onto double boiler and heat to:

Be VERY careful not to go over this final temperature.

Once your chocolate has reached the final temperature it’s ready to pour!

The HARD part is keeping the chocolate at its pouring temperature.

Some people put their pot on a heating pad or in a bowl with 90 degree water.  If you allow it to go above or below that temperature, you won’t get nice shiny, hard chocolate.

Be extra careful not to allow even a drop of water into the chocolate or it may seize up and you’ll be back to playing with a lemon twist. 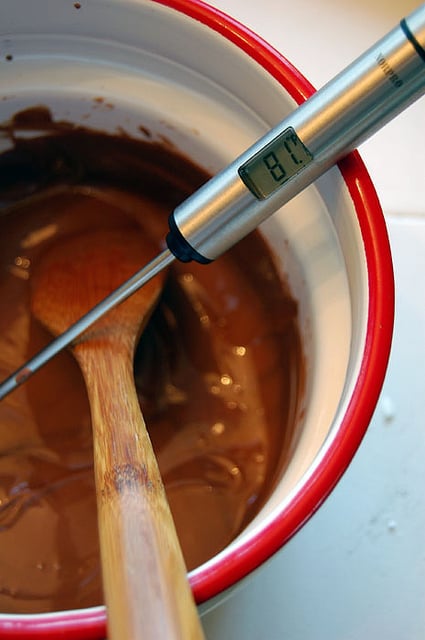 Use a  candy thermometer to gauge your temperature.

Remember.  You  need to maintain your melted chocolate at the correct temperature throughout the entire process of pouring it.

Now it’s time to have the fun.  Don’t waste your money on the plastic chocolate making molds.  They’re often difficult to remove the chocolates from and they look just like cheap store bought chocolates most of the time.  Unless they’re in the shape of a fish.  They’re they’re loads of fun.

To get a professional looking chocolate start by drizzling the chocolate onto some waxed paper so you get a lacy pattern.  Like this. 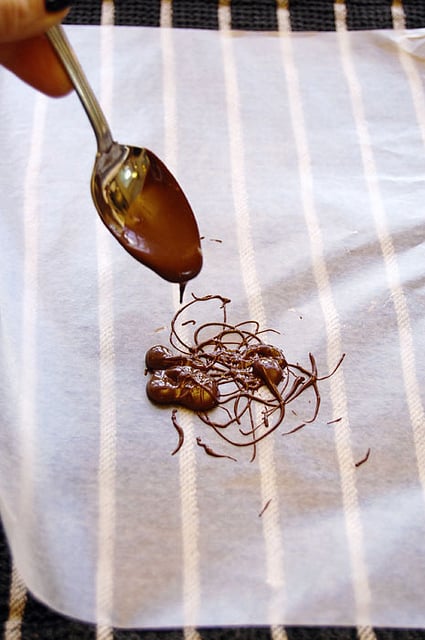 Once the chocolate has hardened you can use it as an embellishment on your other chocolates.  Because it’s tempered, it will be hard and you’ll be able to peel it right off the waxed paper and break off small pieces.

Do these fancy pieces first so they have time to harden before you add them to your other (still soft) chocolates. 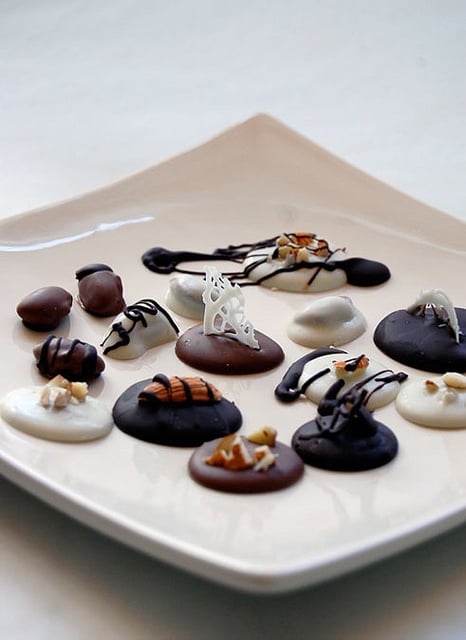 To form your chocolates just drop a small blob of chocolate onto a piece of waxed paper.  It will pretty much automatically form a circle.  Let it set for a couple of minutes, then you can add whole or chopped nuts to the top, or a piece of your lacy chocolate.

You can also drop whole nuts like almonds into the chocolate and dig them out with a spoon, allowing most of the chocolate to drain off.  Drop onto waxed paper.

Notice the nice shine on the chocolate because it’s properly tempered. 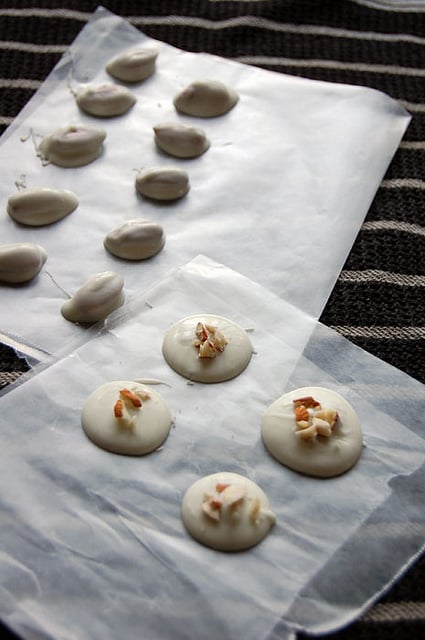 Another way to give your chocolates some personality is to drizzle another type of chocolate over top.  You can keep things neat by only drizzling on the chocolate, or you can go a bit more avant garde like I did and let the drizzle splay out from the chocolate. 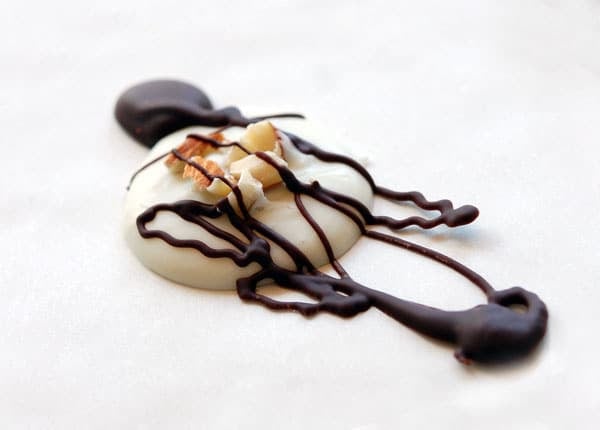 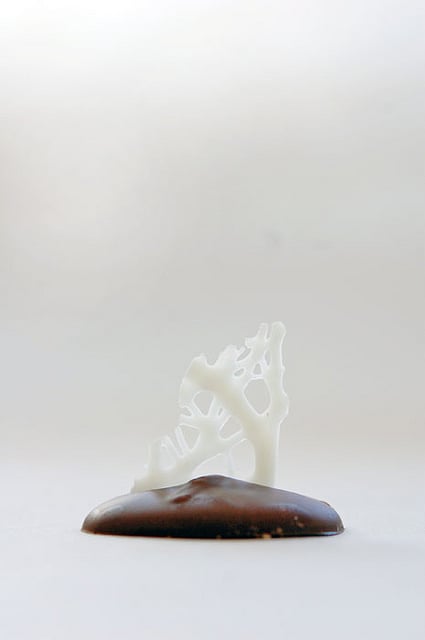 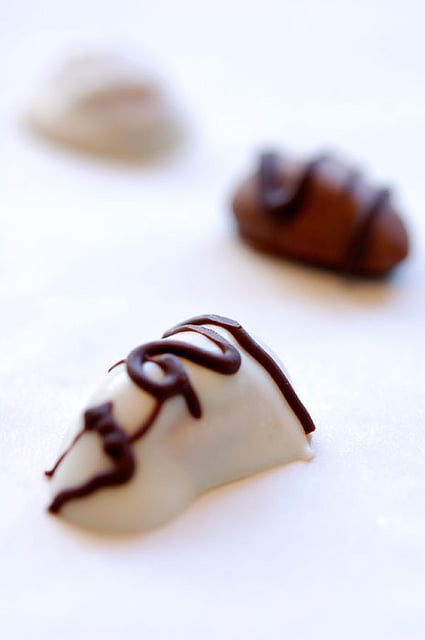 Now that you know the process, here’s a quick reference for chocolate tempering for you.

And yeah.  This post pretty much resulted in the downward spiral of all that is Paleo in this house.  I was never a big fan of chocolate.  Now? I am.