Home » DIY » DIY Tutorials » How to Toilet Train Your Cat

How to Toilet Train Your Cat 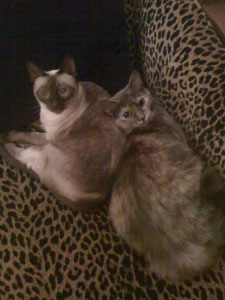 So by now you probably know about my cats Cleo and Ernie.  The cats I have because I couldn’t pick out a dog.  You also know I love my cats even though I understand all the cool kids have dogs that end in “doodle”.  Having said that, you should know my cats come when I call them, play fetch and generally act as doglike as possible.  It’s quite impressive really.

Of course, like kids, there have been some not so proud moments.  Cleo shredded my upper eyelid sending me to the ER late one Friday night.  I startled her.  Try not to startle a cat.

The late Prada used to attack people.  Usually  if he thought they were talking too loudly.   He regularly drew blood and didn’t swat like a normal cat; he opened his mouth, bared his fangs and sunk them into whatever was closest.  My boyfriend was understandably terrified of Prada.

No problems with the formerly wild Ernie yet (other than the scars left over from when I was trying to tame her).  Can’t really blame her for that though.  I mean if it wasn’t for me taming her she’d still be outside having the time of her life, living off puddle water and showing off her street cred mange to all the other cats.

The residual scars on me and my family members are bad but the worst thing about being a cat owner is the litter.  I have gone through every invention and reincarnation of litter known to catkind. 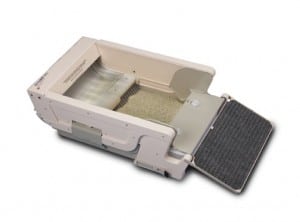 There was the  motorized litterbox.  It broke; which is just as well because it would  randomly fling poo across the room.   There was the scented litter that Cleo refused to use .  Instead, in a show of defiance, it prompted her to pee right beside the litterbox while staring straight into my eyes. And finally there was the flushable litter that kindda clumped but mainly just morphed into messy thick pee pucks that were impossible to scoop.

And then there was toilet training.  Which believe it or not actually worked.  Yes.  My cats peed on the toilet.  Or in the toilet more specifically.

Absolutely fed up with the sheer amount of stuff that comes out of a cat on any given day I thought I’d look into making them go on the toilet.  Like a civilized animal.  A few searches around the Internet confirmed  I wasn’t nuts.  It could be done.  One woman trained her cat so well that she could travel with it to hotels around the country knowing her cat would just hop onto any toilet and go to the bathroom.  No mess, no fuss.  It’d be like having a 3 year old  with fur.

Another woman even taught her cat to not only use the toilet, but to flush!  This was too much.  I mean, I KNOW the Internet lies, (see my Maple Sugar Massacre) but  if there was even a remote possibility this was going to work I was willing to try it.  Even though I only had one small bathroom which I was now going to have to share with a couple of sometimes bitchy cats.   So I read all the articles on it, took the best from all of them and formulated a plan.  Get these cats using the bathroom within 3 weeks.

I did it and I swear you can too.  Everyone involved has to be dedicated but it really does work.  Like all the other things I do that seem ridiculous at first, in the long run this’ll save you time, money and make your life easier.  And it’s certainly no more stupid than putting a Santa hat on your newly tamed, and somewhat unpredictable stray.  In fact, I can tell you right now … the Santa hat thing would be wayyyyyyyy stupider.  Uh huh.

How to Toilet Train a Cat 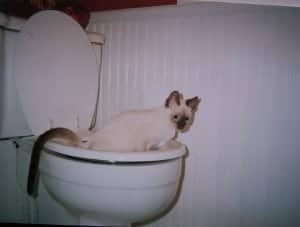 I should let you know that this is just a guide.  Your cat’ll let you know if  you’re doing things too slowly or quickly.  When I did this with my two cats several years ago  Cleo was just too small.

She was still a kitten and simply wasn’t big enough to be able to splay across the toilet the way she needed to.  So it didn’t really work with her.  And since then she’s taken to peeing in corners.  So it’s entirely possible I traumatized her. 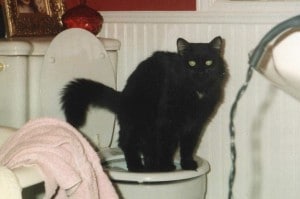 My other cat, Prada took to the toilet like a man.  He in fact let me know in no uncertain terms that I was going too slowly for his tastes.  During the later stages of the process he took matters into his own hands.  My bathroom is right off my kitchen and in a cleaning fit I removed the litter bowl from the toilet but forgot to put it back.  I moved into the kitchen to start cleaning something in there when I heard the distinct sound of a man peeing in the bathroom.  Huh?  There’s no man here.  So I peeked in the bathroom and there was Prada, ignoring the bowl full of litter on the floor, sitting on the toilet.  Peeing.  Like a man.  He got a cookie.