Home » Tips » Decorating » How your bookcase is more revealing than a thong. Plus why you shouldn’t email someone you haven’t seen for 40 years about a human skull.

How your bookcase is more revealing than a thong. Plus why you shouldn’t email someone you haven’t seen for 40 years about a human skull. 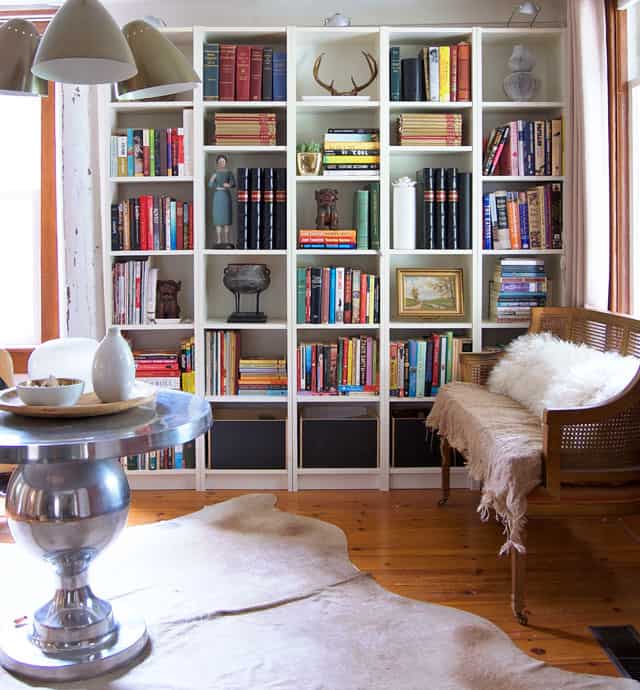 A couple of weeks ago I introduced you to the new and improved version of my bookcase which is suspiciously similar to the old and haggard version of my bookcase.  Sometimes things around your house just start to look unappealing to your eye because you’re just plain sick of looking at them.  Your eye gets bored of them.

So let’s look at the new bookcase and study it a bit.  This is the left side of it. 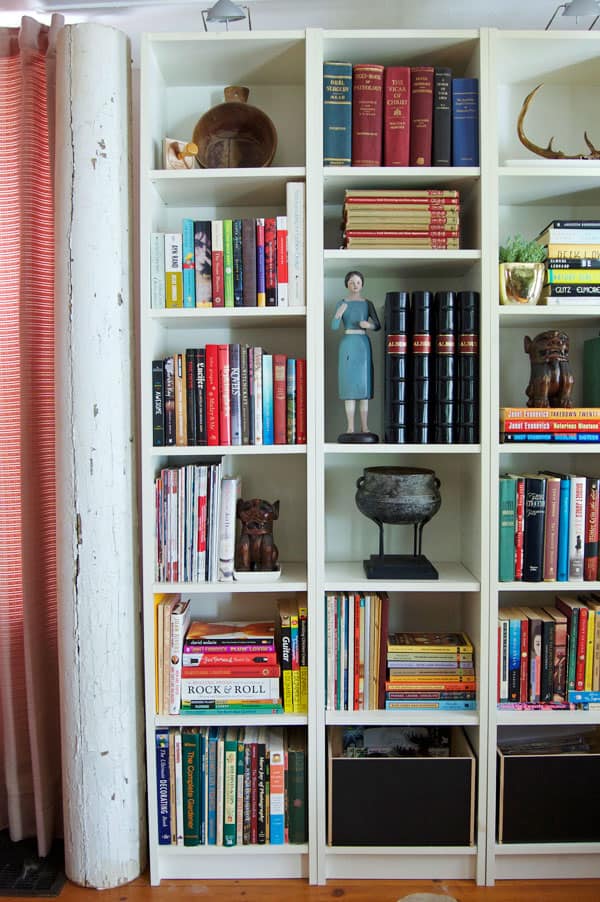 All of the things in there are things that I have bought, read or stolen.  Which makes this bookcase unique to me.  Sometimes you open up a magazine or flyer and you see a perfect bookcase.  Maybe it’s filled with all white vases. Or only blue and purple books.  They’re filled with lots of stuff but it looks like all of the stuff was bought to look perfect in the bookcase.

I spit on perfect bookcases.

To me the whole point of a bookcase is to fill it with stuff you love.  Your stuff.  Stuff you don’t have anywhere else to put.  Stuff you want to look at all the time.  NOT stuff you picked out just because it would look good on a bookshelf.  Too many magazines show perfect.  Too many blogs show perfect (totally excluding The Nester whose motto is actually It Doesn’t Have to be Perfect to be Beautiful).

Let’s take a moment shall we, you and I, to learn a bit about me through the stuff in my bookcase. 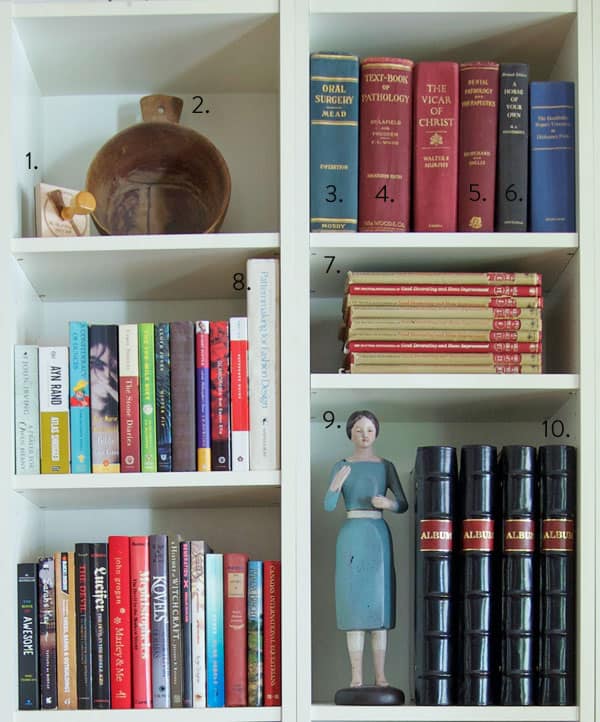 1. Rubber stamp with Art of Doing Stuff Logo.  Handy. Right near the front door so I can stamp people’s foreheads when they come in.

2. Antique Camel milking bowl that my sister brought back for me from Saudi Arabia. She was there decorating the house of a Saudi Princess. House is probably the wrong word.  Let’s go with compound instead.

3, 4 & 5.  Antique(ish) Dentistry books that belonged to Betty’s father, the dentist.

6.  A Horse of Your Own book.  From when I had a horse of my own.  I rode and competed from around grade 8 to the end of high school in hunter, eventing and dressage.  That’s jumping and the fancy stuff where the horse looks like it’s prancing for those of you non-horse type people.

7. I inherited a whole set of vintage decorating books from my friend Karen YEARS ago. They were vintage then, they’re even more vintage now but I still go through them and still get great ideas.  Which I promptly forget.

8. Pattern Making for Fashion Design.  My mom is a sewer.  Like … a sewer-sewer.  Not a pillow making sewer. I can’t remember if this is her book or my book but I know I used it when I was in highschool to make a custom pattern for a pair of suede pants with fringes all down the sides.  If I can still find them and if they still fit I’ll take a shot of me in them in the future and then never ever show you.

9.  I got this wood folk art doll at a local flea market. It’s not old. It just looks it.  Like Lindsay Lohan.

10. One winter I spent the entire season, every single night, going through boxes and boxes of family photos dating back to the early 1900’s and putting them in albums.  These are those albums. 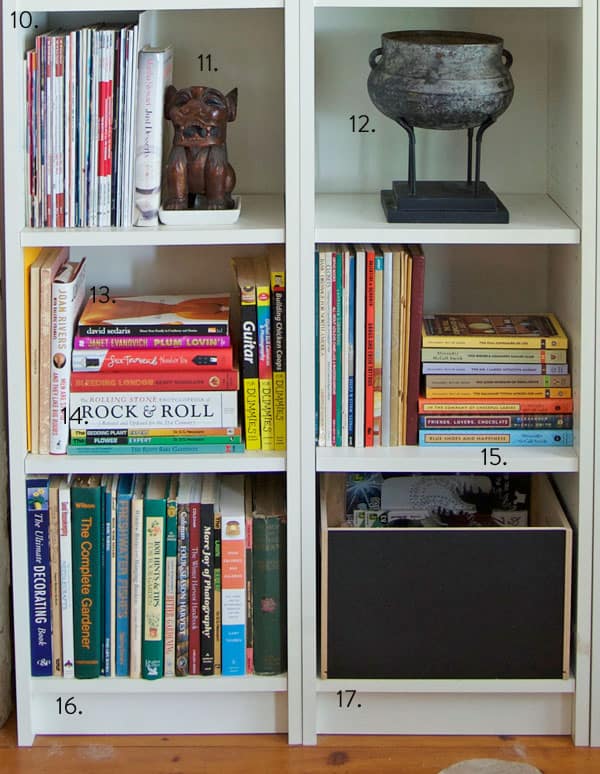 And the bottom of the bookcase …

10. (again … I accidentally used #10 twice but who cares … am I right?)  These are all the magazines that either my home or I have been featured in over the past 15 years.  First as a television host, then as a writer, then as a blogger.

11.  Wood Foo Dog.  It’s part of a pair, the other one is on the other side of the bookcase.  They’re not mine. They’re the fella’s.  He didn’t take them with him when he made his hasty escape.  He got them at a garage sale I dragged him to for about $5.

12. Antique Monk’s Begging bowl that I got on a trip to Thailand with Betty and my sisters.

13. One of my many David Sedaris books.  Love him.  Love David Sedaris. He’s a homosexual which are my favourite type of sexuals.

14. The Rolling Stone Encyclopedia of Rock & Roll.  Got this sent to me by the publisher when I was an entertainment reporter at MuchMoreMusic.

15. My stack of The Number One Ladies Detective Agency Books.  LOVE these books for an easy, relaxing read.  Just me and Ma Romatswe hanging out in Botswana.

16. This is my How-To section.  Gardening, decorating, fixing and general repair.  Like Brick Laying.  Everyone needs a good brick laying book. 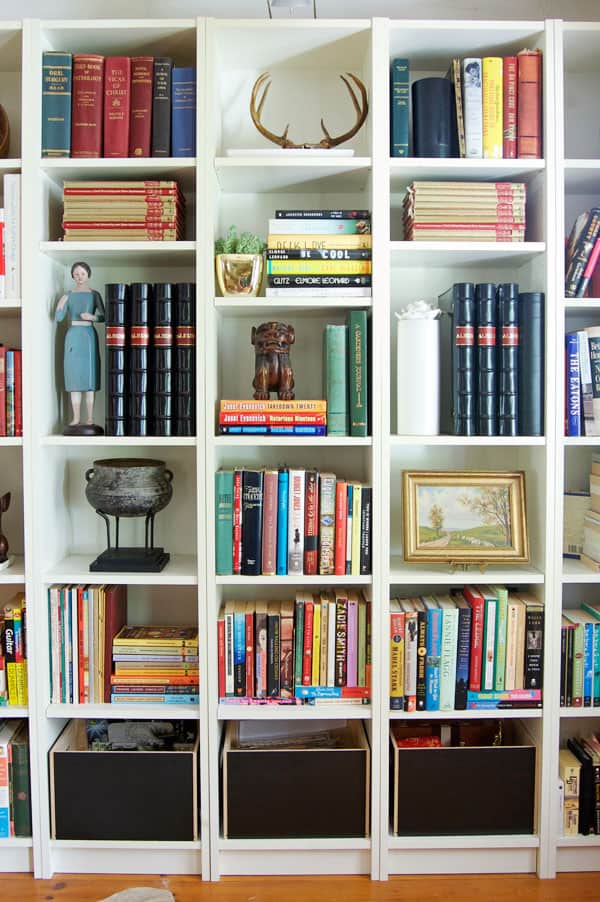 The centre of the bookcase holds one of my most favourite things.  A deer skull/antlers. 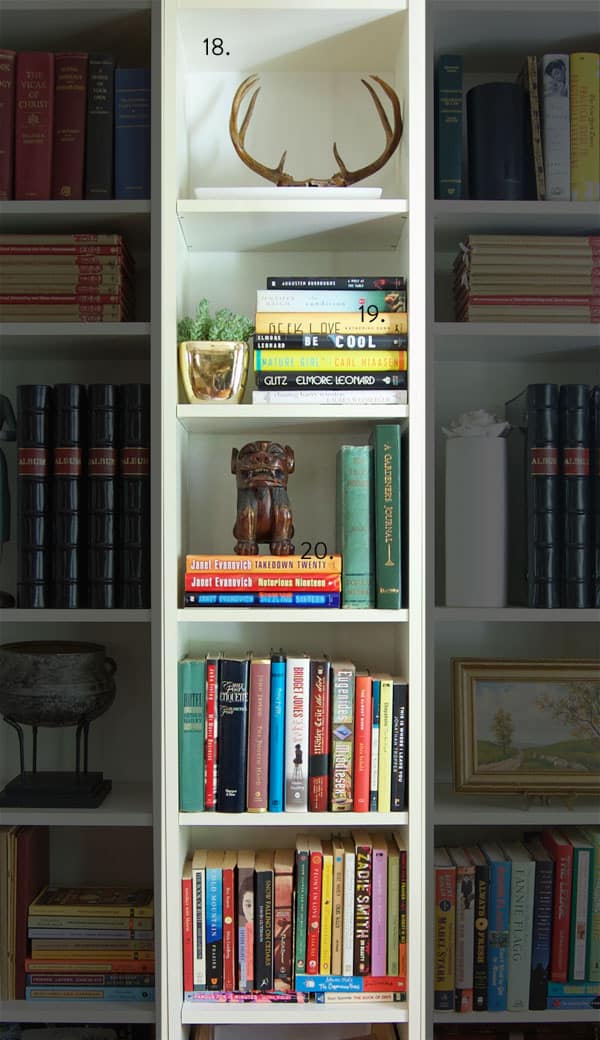 18.  This is one of two skulls I’ve owned in my lifetime.  Both came from my Grandfather (Betty’s dad).  This is the top portion of a deer skull.  The other skull was an actual human skull.  I’m not sure why my grandfather had a human skull but I can tell you it was not the most alarming thing he owned. I’m also not sure why I liked it so much, but so did Tom Crossley.  He told me so when I brought the brown, crumbling, human skull in for show and tell in grade 3.  I suspected Tom Crossley would be interested in my new deer skull so I Googled him.  And then I sent him an email.

This is Karen Bertelsen from Pleasant Valley School. I’m not entirely sure if you’re the Tom Crossley I went to school with 40 years ago or not but I hope so because I have some information you’ll probably be very interested in.
I got a new skull a few years ago.  Not like a transplant or anything, I mean a deer skull with antlers.
Anyhow, I thought you’d be interested because I remember in grade 4 you were quite impressed with the human skull I brought in for show and tell.
If you’re interested I can send you a picture.  Sorry it took so long to let you know about this new addition to my collection.
I hope you’re doing well!
Karen Bertelsen
http://www.theartofdoingstuff.com

If Google is accurate then Tom’s now a professor of Economics at the University of Essex in England.  Tom never emailed me back.

19.  Geek Love.  One of my favourite books.  NOT for everyone what with the circus people intentionally screwing up their pregnancies in the hopes of birthing a money making Geek.

20. There’s that other Foo Dog, sitting on top of my other favourite relaxing reads … Janet Evanovich. 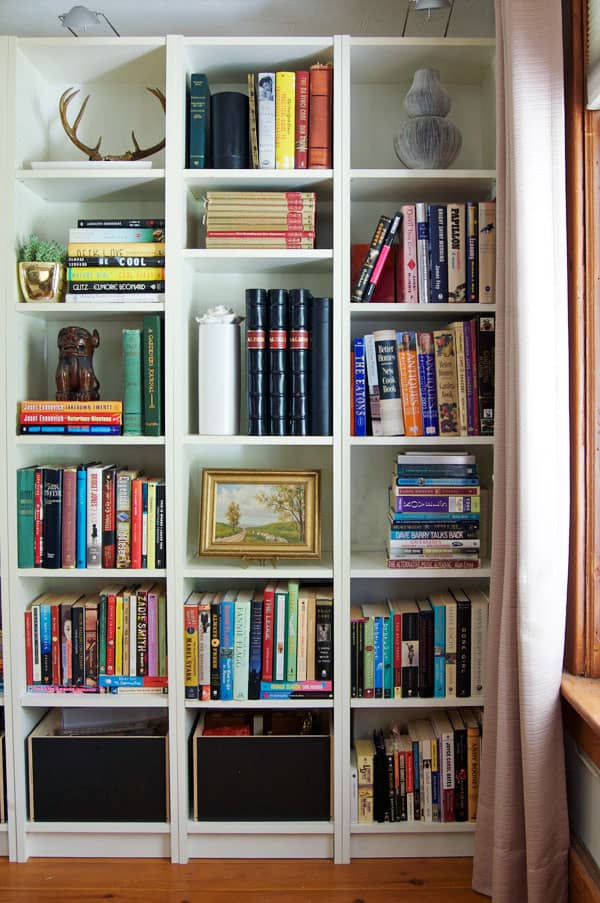 Which leaves us with the right side of the bookcase. In case you don’t know enough about me and what I’m like.  At this point you’ve learned I’m a horseback riding television host, descended from a skull hoarding freakshow of a grandfather. I also do a lot of Dollar Store crafts in Thailand in between brick laying and stamping people’s heads. 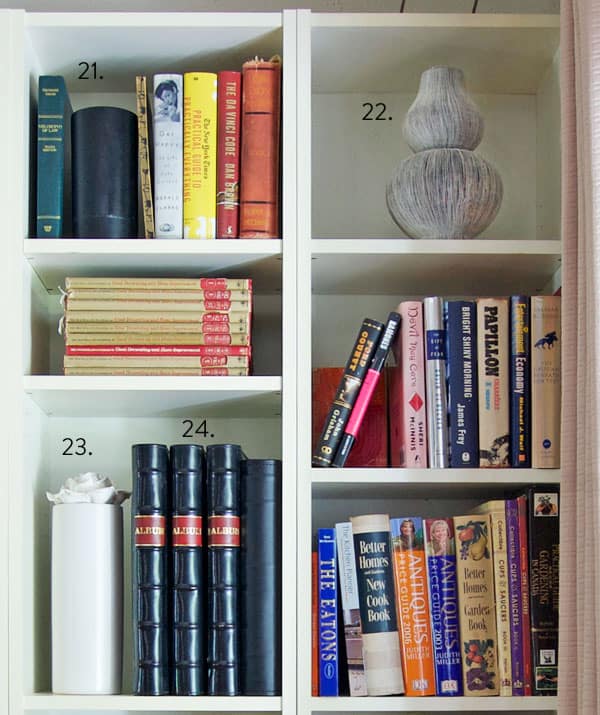 21. This is that black vase I was looking for the other day.

22. This is newspaper vase I picked up at Chapters years ago in the Wu Lou gourd shape. 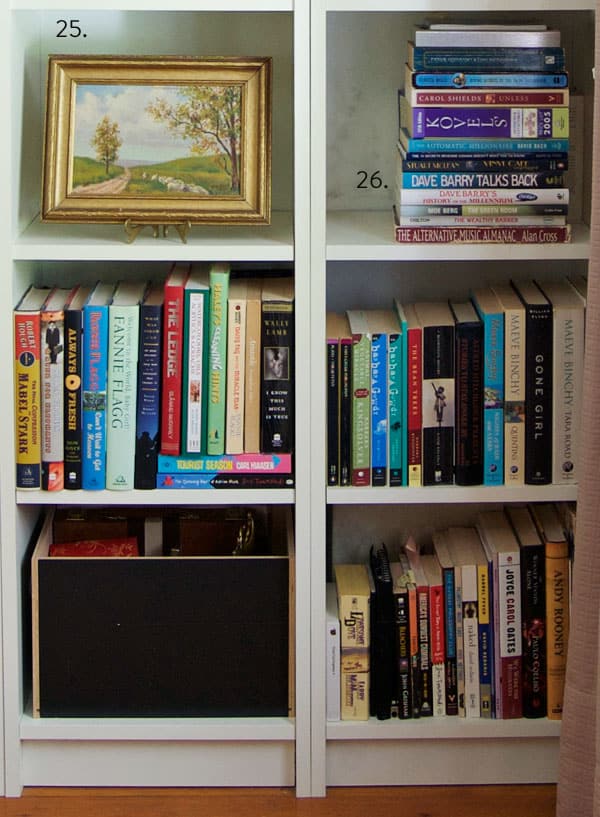 25.  The second I saw this little oil painting I loved it.  Just a little farm/field scene with sheep. I debated and debated over whether to buy it or not but I finally gave in and shelled out the $2.   I remember when you didn’t have to pay more than 50 cents for anything at a garage sale.

26. Dave Barry.  As a teenager I somehow came across Dave Barry; probably in my local newspaper.  Definitely not in the school cafeteria, although if he was in there I wouldn’t have noticed him over my daily mountain of french fries and gravy.  I don’t eat nearly enough french fries and gravy anymore.  Anyhow,  I couldn’t believe what this guy was doing. He was just talking.  His job was to sit at home and write a funny little column.

I knew everyone thought this was a pretty easy job as long they had an entertaining enough family and a six pack handy.  I had neither so I figured my life’s work would involve something that required I wear business suits with shoulder pads.  A tycoon maybe.  Something more realistic than a writer.

I made it through highschool (again I’m insisting everyone write highschool as one word so we can once and for all make sense of the English language) and went on to University getting a degree in Sociology and some sort of minors in Philosophy and Religious Studies and maybe even the history of the corn dog.  You know.  The real moneymakers.

I guess you all know how this story ends.

With me eating a plate of french fries and gravy.