I told you I was a Television Host. Here’s 22 minutes of proof.

I told you I was on television.

Last week one of my guest posters confirmed it by making reference to a show we were on together several years ago. Andrea Claire was the hair and makeup artist on Stylin’ Gypsies, a makeover show I hosted for W Network in Canada. The premise of the show was we travelled around Ontario in a big, pink, falling apart RV, giving women from small towns makeovers. 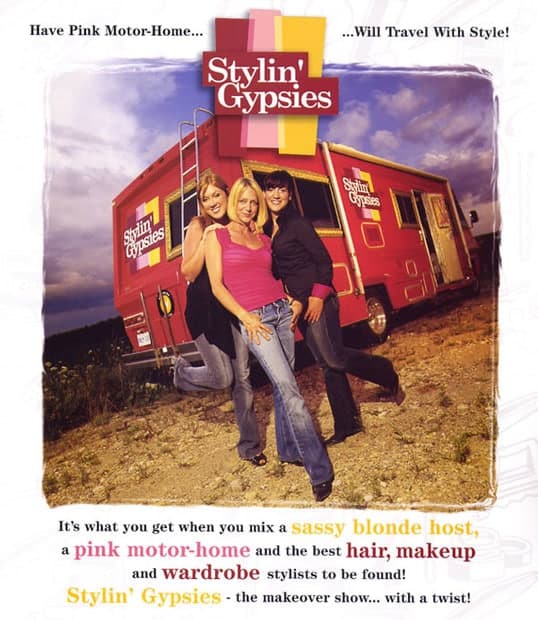 I’m sassy. The kicker was the women getting the makeover didn’t know we were coming. Their friends and family did. But the actual makeover subjects didn’t. Like … no joke. They had no idea we were showing up. The top of the show was always me surprising the person getting the makeover. When they went to get their makeover by Andrea (and Leslie the wardrobe person), I was responsible for taking over their job … whatever that may be.

Over the course of 3 seasons I had to be a highschool principal, a caretaker for snakes, a secretary, a cashier, a waitress, a babysitter, a firefighter, and more. Much more. So much more I can’t remember them.

So I thought, for this weekend I’d leave you with an episode of Stylin’ Gypsies that I have absolutely no legal right to show. So sue me. No please don’t. I have no money.

In this episode you’ll see more of Andrea Claire who provided me with a guest post all about makeup last week and of course … me.

In this particular episode of Stylin’ Gypsies the girl we were making over was … a wrestler. Which if you have any powers of deduction at all, you will realize, means I took over her job as a wrestler.

The show is a regular half hour show which means it runs for 22 minutes in real time. Watch it now, or save it for later. It’ll give you a bit more insight into what (up until 2 years ago) was my regular occupation.