If you’re read anything on this blog you’ve ascertained that I’m frugal.  Mostly out of necessity.  I make my money in batches, so when I have some in the bank I like to keep it there as long as possible in case I don’t work again for another 6 months.  Plus, I just come by being cheap naturally.

However, in a tragic twist of fate, I also like really expensive things.  Whenever I look through a magazine (be it fashion, decorating or even a Sears catalogue) my eyes always laser in on the most expensive thing.  I once looked through a Cat Fancy magazine and decided I wanted something called a Bengal cat.  Turns out they’re a rare exotic, partly wild breed made mostly of plutonium judging by their price.

So to satisfy both my cheapness and my secret desire to be a Vanderbilt, I mix and I match.  I buy a variety of expensive things and throw in some cheaper stuff to balance it out.   For instance, instead of buying a Bengal cat I painted leopard spots on my Siamese and  taught her to growl.  Buy whatever expensive thing you love and know you’ll never find anywhere else and find the rest at these stores:

As mentioned in another blog, a year ago I painted my whole house white and sold everything in it.  I kept a couple of antiques and my cats and that’s about it.  Oh and the big lug.   It’s entirely possible it was the result of a minor breakdown, but regardless … the house looks great now.  Over the next year I filled my home up again with a couple of custom made pieces, a few expensive items, and a whole lotta stuff from Homesense.

If you’re thinking … Wow, that Karen is smart … she remembers the prices of everything she buys … think again.  One of my idiosyncrasies is the fact that I stick the price tag of everything I buy on the underside of it.  I have no idea why.  But it sure came in handy for this blog.   I also have a bunch of accessories and tchotchkes from Homesense that were so cheap I can bury them in the basement when I get sick of them.  I do that with the big lug sometimes too.

I LOVE Dollarama.  For one thing every single thing in there is a dollar.  Or at least it used to be.  And they often only take cash, which makes overspending difficult.  Unless you have the keen foresight to go to the bank 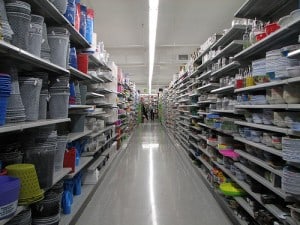 you could buy everything in this whole aisle for the price of a lame (but cute) donkey.

machine PRIOR to going to the Dollar Store and withdraw at least $50.  Maybe $100 if it’s the holiday season.    I’m getting a bit off track.

The discussion of grossly underpriced toilet brushes and stackable boxes does that to me.   Swear to you.  Go to Dollarama with an open mind.  My bathroom bins for hiding toilet paper etc. came from Dollarama as did my most beautiful, white, rectangular kitchen dinner plates.  And most of the bowls in my house.  Dollarama is GREAT for housewares.  I am familiar with most Dollaramas in Southern Ontario and in fact lined up early in the morning to go to the grand opening of one.  I got a gift of a Dollarama coffee mug.  It is not something I would have purchased, but for free … I wasn’t about to give it back or anything. Although a LOT of people in line did just that.

Yeah it’s cheap, yeah it’ll probably only last one season but it’s where you want to spend your money on T-shirts and comfortable pants.  For the best results, mix your Old Navy stuff with your not Old Navy stuff. 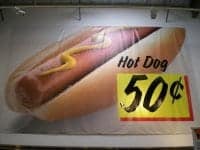 Right up there with Homesense.  And kind of like clothing from Old Navy, you have to mix the Ikea stuff with non-Ikea stuff.  There’s only one place a room filled entirely with Ikea stuff looks good and that’s in the Ikea catalogue.

OH MY GOD!  AND YOU HAVE TO GET A HOTDOG BEFORE YOU LEAVE!!!!  Because I’m a bit obsessive compulsive (self-diagnosed) I have to figure everything out.  So, if you TOO love the Ikea hotdog I can tell you exactly how to make one.  I looked in their garbage cans and behind the counters for the answers to this question.  Check out my post on the Ikea Hot Dog right now!

If you’re gonna be a fix it yourself kinda person you have to get familiar with these hardware stores.  Your local hardware stores are great too.  This is where you’re going to get your dimmer switches, power tools, and bizarro doo dads for fixing broke stuff.  Like drywall, ceramic tiles and drippy taps.   When you’re there remember you don’t have to use things for what they’re meant for.  I needed to raise up my dining room chairs by an inch and noticed some white plastic pipe for plumbing there.  Using my handy hacksaw I cut the pipe into 1” lengths and glued them onto the bottom of my chairs to raise them up to the right height.  If you were to get really creative you could create lamps or end tables or just about anything out of them.  So to reiterate, look at everything as something other than what it is.  That’s where the best things come from.  If Andy Warhol make a masterpiece by peeing on a painting, you can find another use for a piece of copper electrical wire.

Years ago I brought my friend Robby as a guest to Costco.  The minute we walked in the door he broke into a sweat and started grinning like a psychopath.  In an absolute Costco induced frenzy he bought a restaurant sized jar of olives.  I’m fairly certain this resulted in him becoming a raging alcoholic.  Only 7,238 martinis to go Robby … you can do it!  Cirrhosis be damned.

And not EVERYTHING is cheaper at Costco so know your prices.  Pop usually isn’t cheaper unless it’s on sale.  Magazines and books are ALWAYS cheaper, but not always cheaper than you can get them at Chapters.com or Amazon.ca.

The main reason you want to become a member of Costco is because it’s a great place to pick up a variety store owner.  And to buy meat.  If you read anything about meat grading they’ll tell you the quality of meat at Costco is excellent. And it is.  I buy all my chicken, ground beef, and roasts at Costco and then Foodsaver them.  For ribs, you’re probably better off at a butcher shop.  And Costco’s pork chops are large enough to be suspicious.  But my mom likes ’em.  My mom also likes the Mandarin restaurant.

Auctions, Garage Sales and yes … the side of the road

You know that feeling my friend Robby got when I brought him into Costco for the first time?  That’s the feeling I get every time I drive past a big pile of 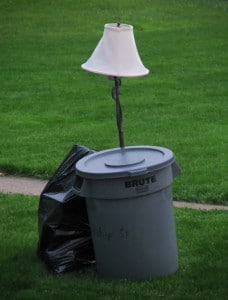 garbage at the side of the road.   If it’s a big pile of chairs I get especially lightheaded on the off chance that one of those chairs in there is an Eames.  It could happen.  It hasn’t … but it could.  Let me know if it’s happened to you!  I’d hate to believe that it really isn’t possible and I’m basically believing in the Eames fairy.

Eames chair aside, I have found a lot of great stuff at the side of the road.  A huge wood sideboard from the mid 1800’s, antique cups and saucers, fantastic plastic retro chairs, mid-century chairs, antique wood chairs and countless other things.  I get disproportionately agitated when there’s only garbage in the garbage.

Like I’ve said, for the first 10 years my house was furnished with stuff I got from auctions, garage sales and the garbage.  It served me well until one morning when I woke up and hated everything.  I’ve kept a few things but now I try to adhere to the 80/20 rule of decorating.  80% new stuff, 20% antiques.  No exceptions.  Unless I happen across a particularly good pile of junk.  Or a well stocked crackhead.  (see post on the top 10 kitchen tools)