I'm sure you've seen it.  Pictures on the Internet or in magazines of 3 cobs of Indian corn tied together like a nice little hanging package. What could be easier? And in fact many sites label their photos as "Easy fall decorating!", "So simple!", "Even an artichoke could do it!".

It's at this point I refer back to one of my favourite phrases which is "The Internet is a Big, Fat, Liar".  I was even going to start a web page called that but I was too busy looking up whether or not bananas actually have brain cells let alone opposable thumbs for tying knots.  According to the Internet bananas probably invented knots and will both cure and give you gout.

I think by now we're all aware that most of the pictures on Pinterest are about as achievable as saddling a pig.   We realize when we see a home made entirely of of crystal chandeliers and a single wood pallet that it probably isn't something we could do on our own, but it sure is pretty, albeit weird, to look at.

But when you see something like 3 cobs of corn tied together with a string you figure, now THAT'S something I could tackle. I've built my own chicken coop, installed my own heated floor, redecorated my entire home to the point that it's been featured in countless magazines.  I'm handy, I'm crafty, I do STUFF.  I'm gonna bundle the shit outta that corn. 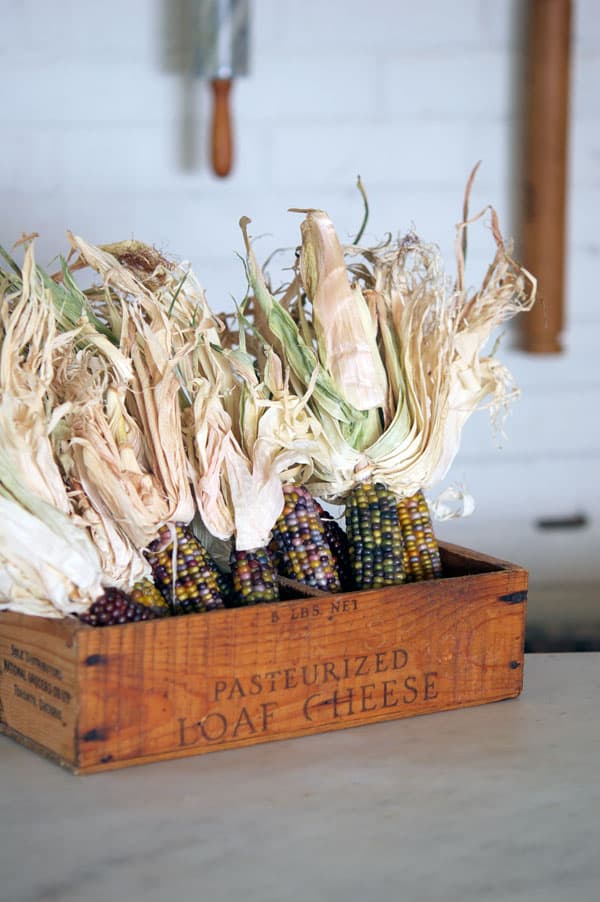 Here's my corn in a wood box because I couldn't bundle it.  Seriously. I can't tell you how many times I tried to tie 3 stalks of Indian corn together.  No matter what I did or how I did it, the bundle came out looking like it was done by someone with toilet paper stuck to their foot and dandruff on their shoulders. 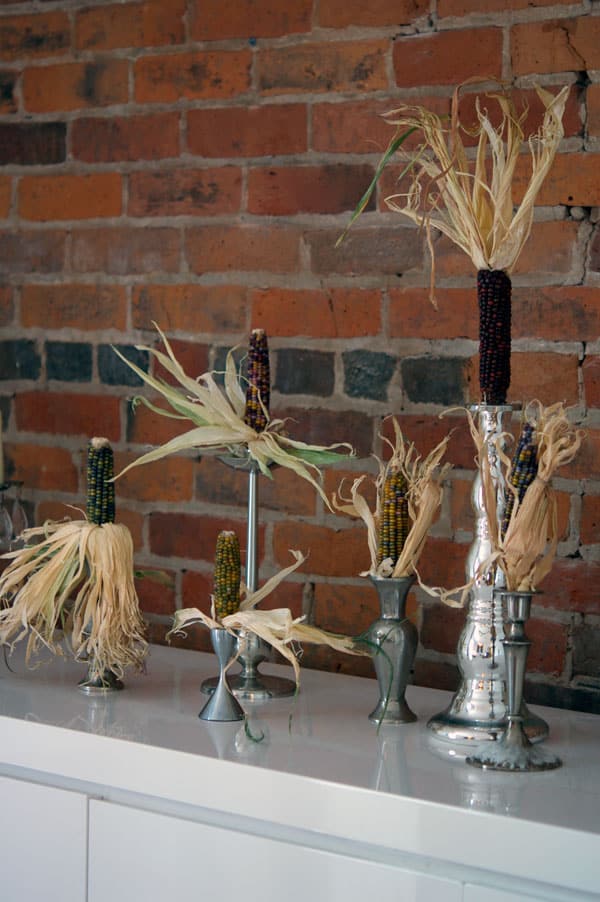 Ways to display your Indian corn number 2 is in vases or candlesticks.  I used some of the darker Glass Gem I grew this way and they look great.  Fair warning.  This method is only as successful as your vase or corn will allow.  When you're putting the corn in shove it a bit to make it stay. You may need to glue it, tape it or turn the corn around.  It will work, you just need to experiment a bit.  I like this method because you can see each individual corn. Also the one on the left looks like a tiny, little hula dancer which makes me feel like I'm in Hawaii. 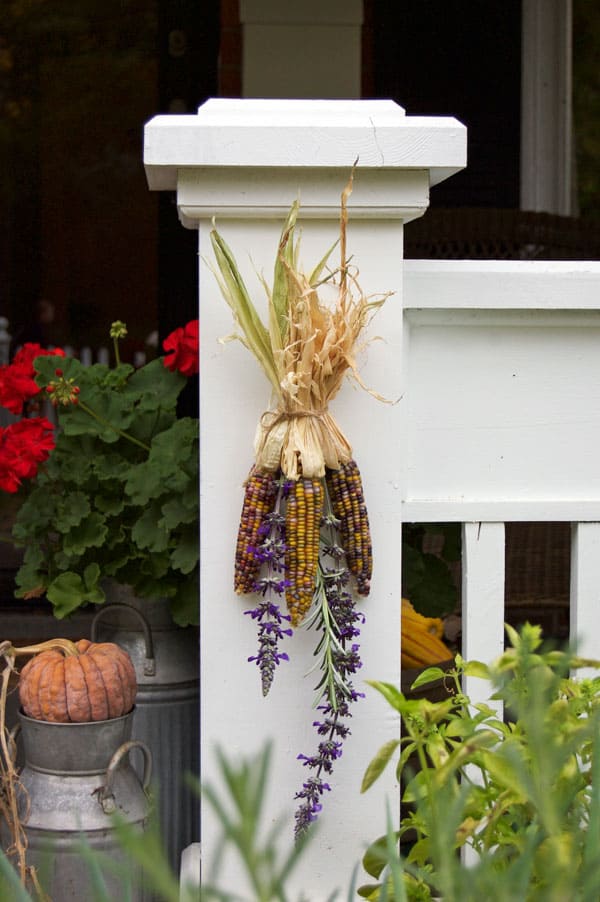 And then it happened.  Ways to display corn number 3.  The holy grail of Indian Corn display.  I managed to tie 3 pieces of Indian corn into a bunch and have it look like someone who doesn't drool did it.

To make 'em a bit more fancy just stick a few pieces of grasses or flowers in them. 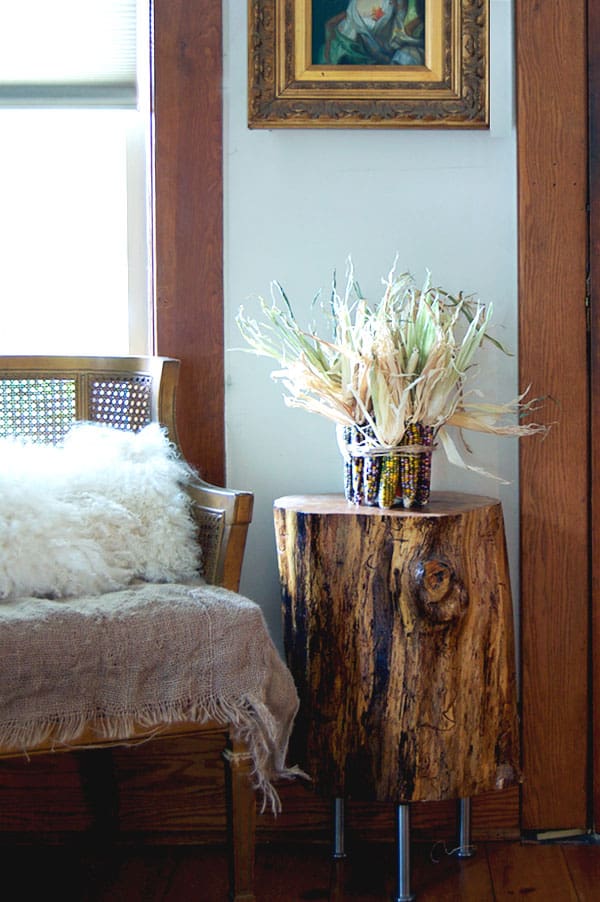 Ways to display Indian Corn number 4.  And this one was probably the trickiest but I figured it out so you don't have to.  As you may have noticed, for whatever reason, Indian Corn is expensive to buy.  I think in my grocery store it's around $10 for 3 measly cobs.  So you probably aren't going to want to buy tons of it.  It *will* last for years providing you keep the mice away from it but still ... it's  not cheap.  So to create a bundle of Indian Corn like you see above would cost about the same as buying an Indian motorcycle.

To save enough money so you can actually buy your Thanksgiving turkey this year as opposed to renting it, stack the cobs of corn around a small can.  I used a Campbell's soup can.  It's a bit finicky but you can do it.  Put your first one or two cobs on the can and tie them on by wrapping string around the can.  Then add your next two cobs. And so on.  Finish it off by wrapping string, twine or rope all around the bundle.

Note: All the corn used in this post is Glass Gem corn.  A translucent gem coloured variety discovered in 2012.  If you read about it in Monday's post (because you're awfully fantastic and read all of my posts) and tried to order some but your country had been blacklisted or shipping was outrageous, email Julia, the woman behind the Seeds Trust that has the corn seed.  She'll help you out.  Shipping to Canada will be around $5.75, NOT the $35 it says it is on the website and most countries haven't actually been blacklisted; it's just a website glitch.