Home » My Life » Me » Judging a Pie Contest.Plus the winning recipe!

Judging a Pie Contest.
Plus the winning recipe!

When I was just a small wisp of a thing, I dreamed that one day I’d have a job I loved.  A job I would wear designing clothing to, which was fulfilling, paid scads of money,  and required that I drive a Porche like that girl who was a lawyer on the TV show Sisters did. That was the show where all the girls had boys names.

Clearly, as a child, I had no idea how to dream big.  Had I known how to dream the impossible dream I’d have dreamed I’d one day grow up to be a PIE JUDGE.

I do not have, nor do I want a Porche, but I can add pie judge to my hysterically long list of jobs.  Technically it wasn’t a job since I didn’t get paid but I did have to be there at a specific time, perform a required task and leave before everyone else got drunk and fell down.  If that doesn’t scream job I don’t know what does.

The pie judging was for the Marche Nocturne event I told you about last week.

There were 19 pies in total, but somehow when we got down to judging there were only 17 pies.   I’ve never met a food that could grow a set of legs like a pie.

I, along with my fellow judges, Lisa Picone and Jeff Goodes judged each pie according to 3 bits of criteria.  We scored each criteria out of 5, then totalled the marks. 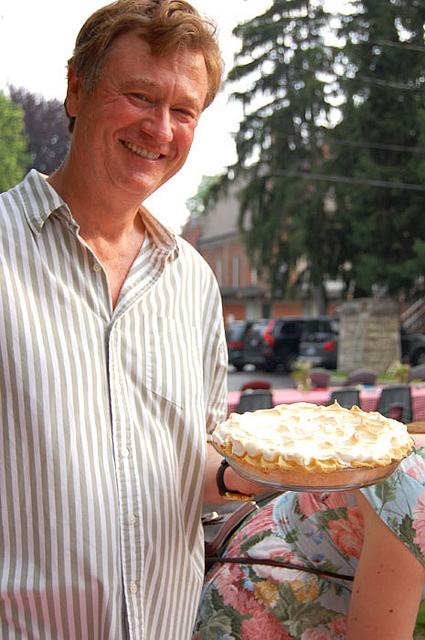 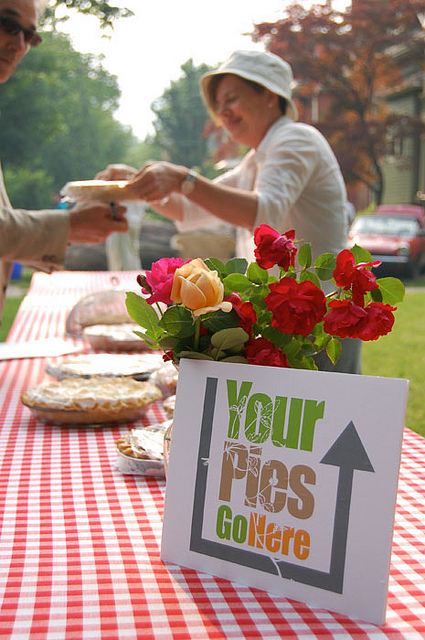 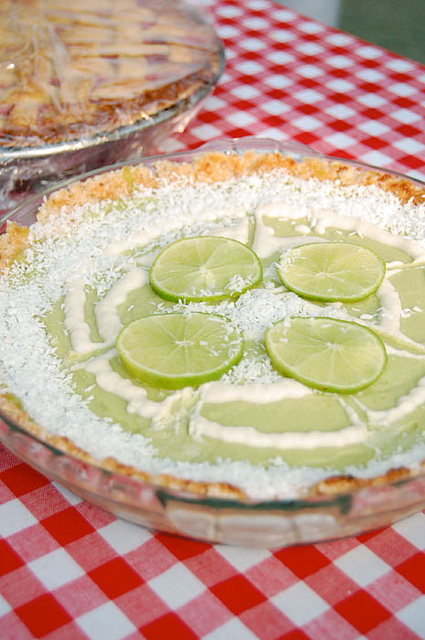 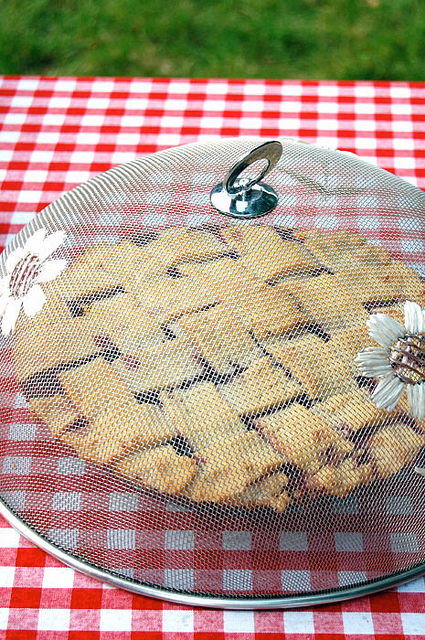 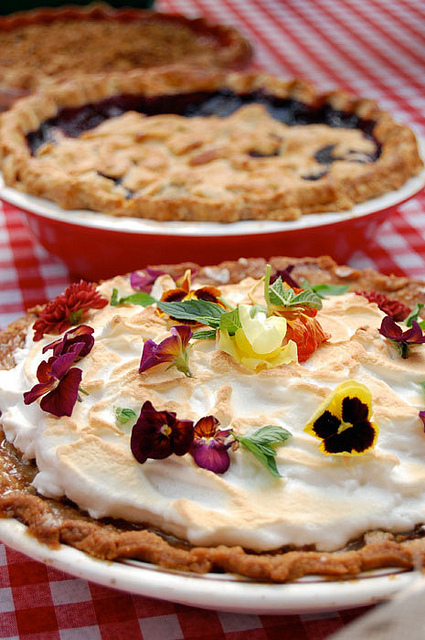 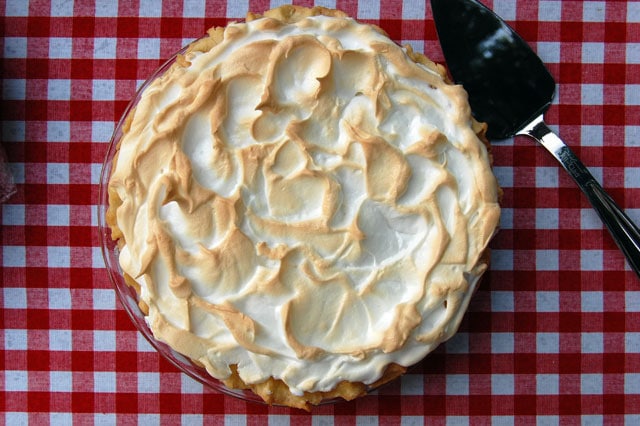 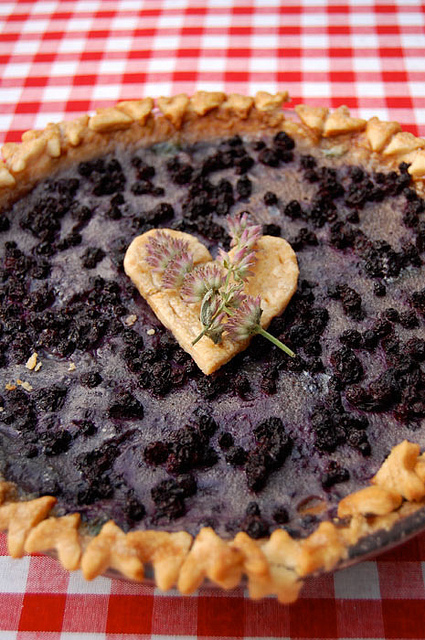 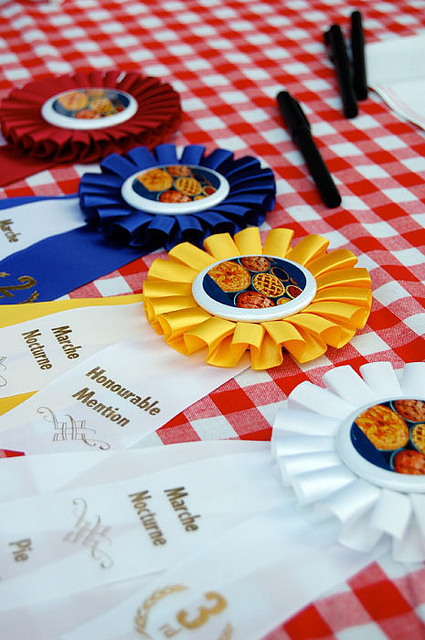 … complete with picture of pies. 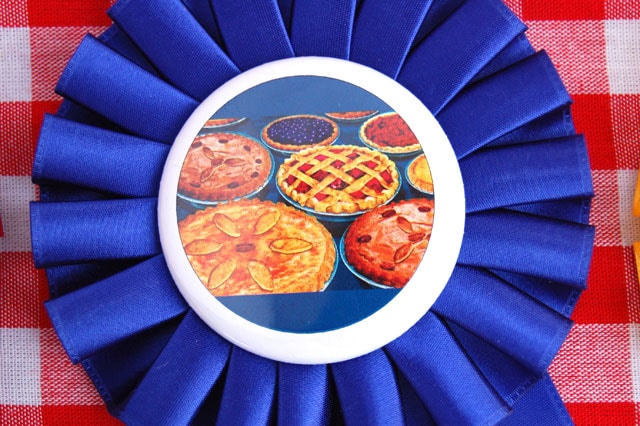 The pies.  All of the pies. That’s a lotta pie. 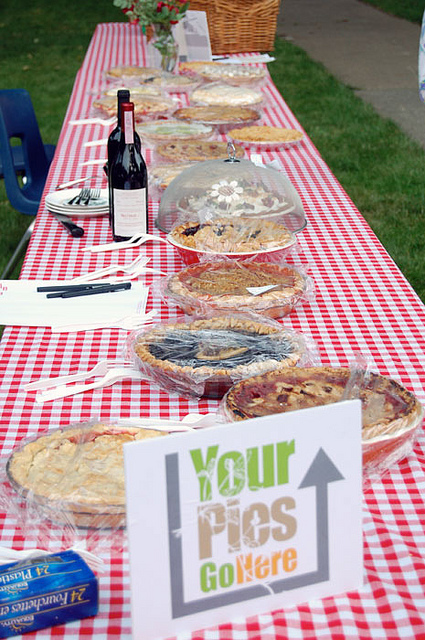 My fellow judges Lisa and Jeff. Two finer folks you never did meet.

I should mention that they were a bit less um … discriminating … when it came to judging.

They were nicer.  I was a pie nazi.  I become a raging, exacting, maniacal person once you put a pie fork in my hand. 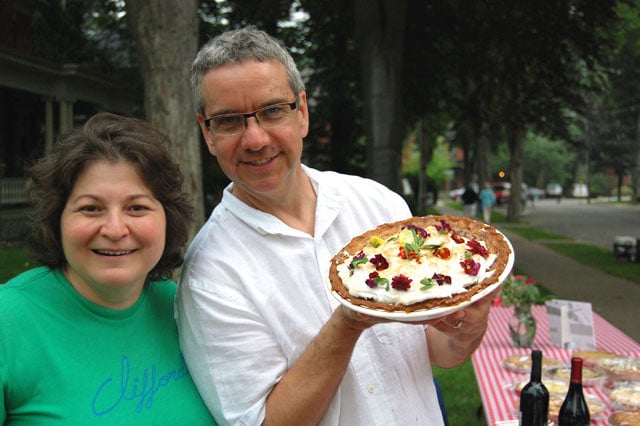 Of the 17 pies, there were probably 6 or so Strawberry Rhubarb pies. It’s very difficult to taste that many Strawberry Rhubarb pies and have any of it make sense.  But the differences between them were amazing.  Some maintained their filling shape once you cut into them, others turned oozy and runny once you took out a slice.  Some had salty crusts, some were incredibly tart.

Other pies brought a tear to the eye.  For a variety of reasons.

Other than Strawberry Rhubarb pies there were a few cream pies and some really delicious flavour combinations.  Like the classic chocolate raspberry pie, which we deemed more of a tart.  And the raw avocado lime pie!  We all said a little prayer before trying that one.

17 pies and countless plates later we came up with our winner.  A unanimous decision.

A Strawberry Rhubarb pie with a GLUTEN FREE crust! 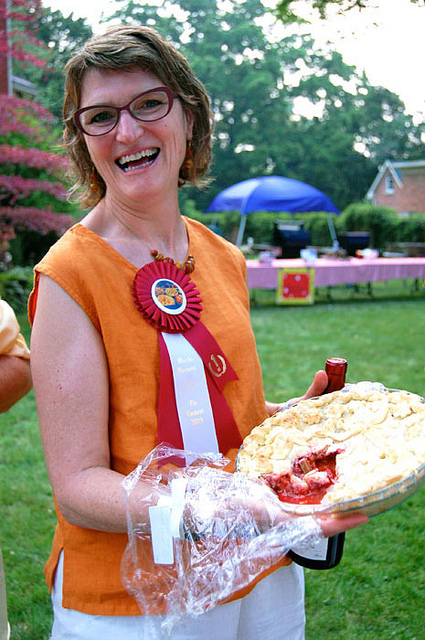 Valerie’s gluten free crust was the best crust of the whole contest!

Second place went to a most surprising pie!  .  Not only was it a BOLD choice, it was really good!  Nice crust, fantastic filling, plus a well executed appearance.  AND it was a man-pie. 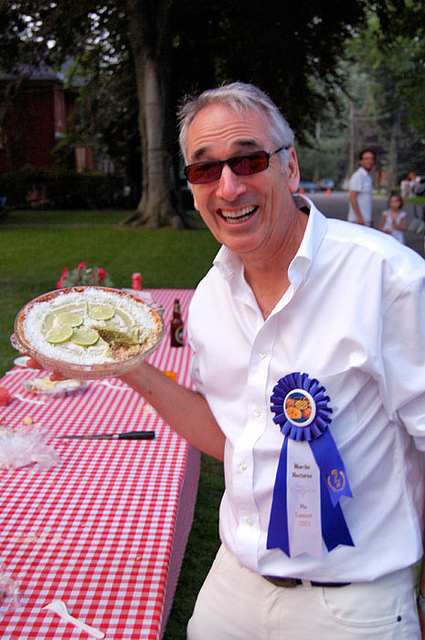 Best of all … I have the recipe for you.  As it turns out the recipe was in the local paper the week before the pie contest so it wasn’t too hard to find for you.

This dessert will keep for 10 days in the refrigerator in an airtight container or for up to 4 months in the freezer.

Flesh of 2 to 3 avocados

This will keep for 2 weeks in the refrigerator in an airtight container.

In a food processor, chop macadamia nuts into small pieces.

Add coconut, date paste, vanilla and sea salt and blend to obtain an evenly consistent mixture that can be formed into a ball.

Soak dates in water for at least 2 hours.  Apply pressure with another bowl or dish if necessary to keep dates under water.

Once dates are thoroughly softened put dates and water in food processor and combine until they form a paste.

Avocado mousse: In a food processor, combine avocados, lime juice, coconut butter, agave nectar and vanilla; blend to a smooth cream of even consistency. Pour into crust. Set aside at room temperature while preparing frosting.

Frosting: In a blender, combine water, lime juice, nuts, agave nectar, vanilla and sea salt. Blend to a smooth cream of even consistency. This can take several minutes. If needed, add 1 to 2 tbsp (15 to 30 mL) more water. While blender is running, incorporate melted coconut oil.

Before serving, garnish with lime slices and grated coconut, if desired.
[/print_this]

And no.  I know what you’re all wondering.  There wasn’t a SINGLE true pie in the entire bunch.  Not one.  It was like some sort of True Pie revolt.  Speaking of revolting, I’m not sure if you’ve ever consumed 17 different pies in one sitting but I hadn’t.  It’s quite a culinary experience. Most confusing for my belly, but a whole lotta fun.

You won’t drive a Porche and you definitely won’t make scads of money.  But you’re going to love your job.