I hope you have your sap buckets ready because today you’re going to learn how to make maple syrup at home with ONE single tree.  Yup. Even if you’re a city slicker. 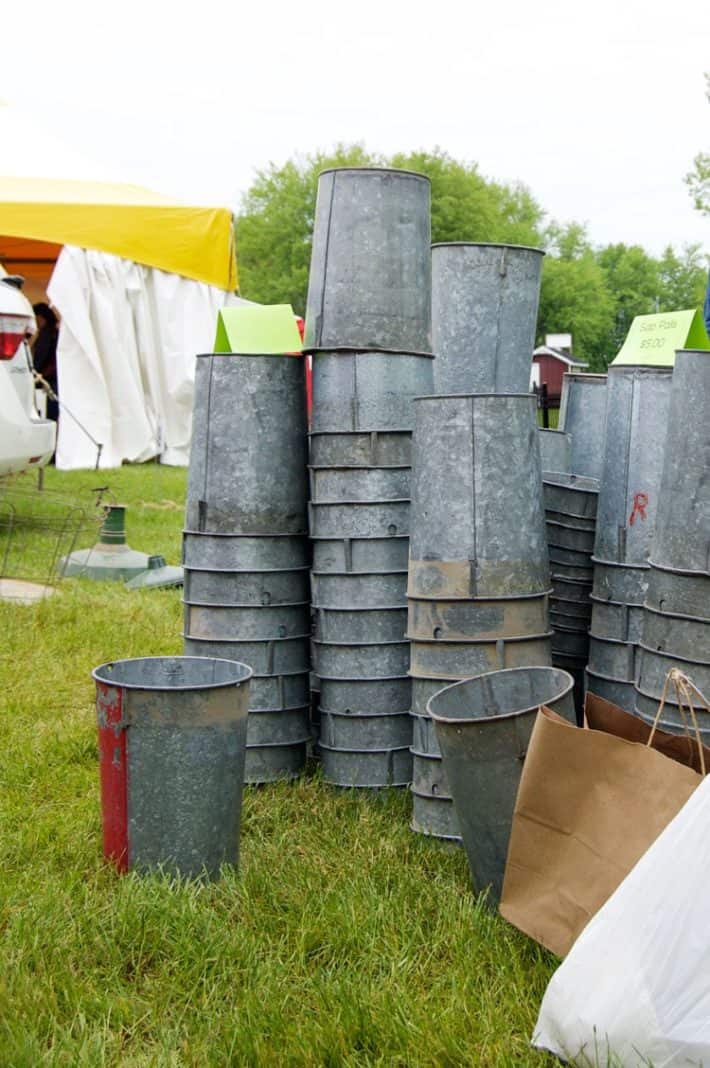 You probably also don’t have a forest of trees to create your own sugar bush for making maple syrup. But that’s O.K. because you only need ONE tree to make maple syrup.  Yep.  One. Maple. Tree.  That’s all I’ve been using to make maple syrup for the past 6 seasons. The single, big maple tree in my backyard. 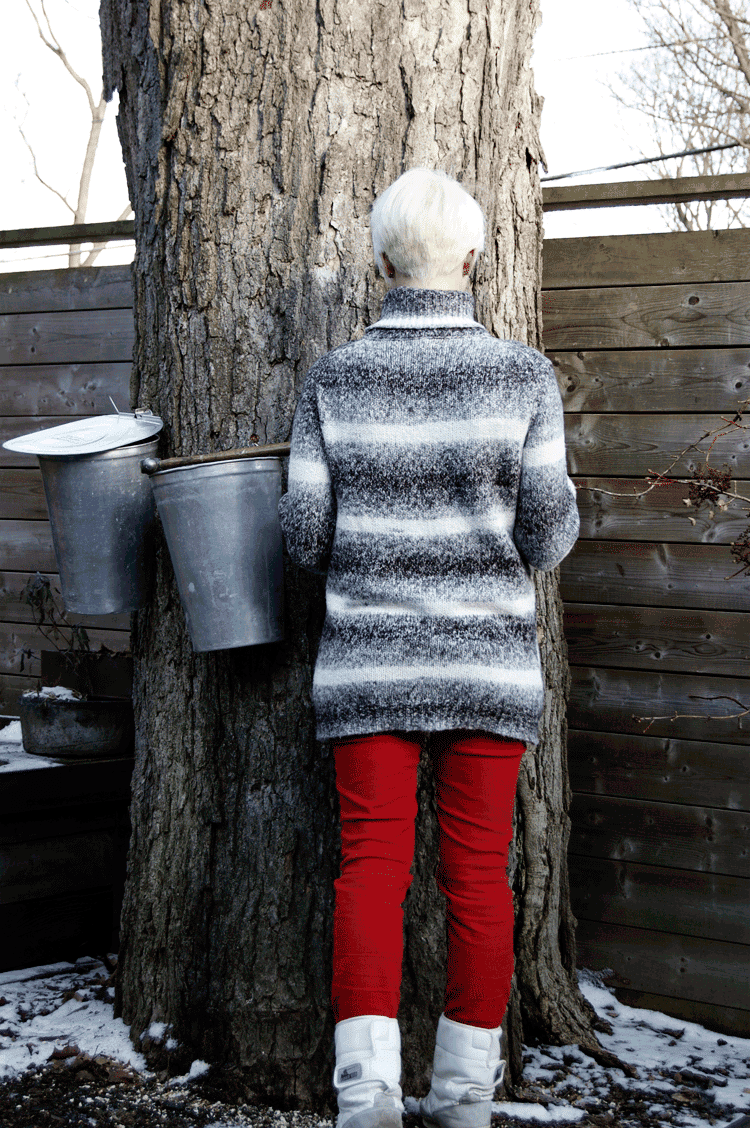 The bigger the tree the more taps you can put on it for sap.  My tree is huge so I can hang 2-3 buckets off of it.  I debated about tapping my tree at all this year since the tree seems to be on its last legs, but that ended up being what prompted me to tap it.  (You should only tap healthy trees because tapping takes some of the trees energy away from it.)

I know this tree is weak and old and should probably be in a nursery home, but I WANT MORE SYRUP.  This Spring I’m having my tree looked at to decide whether it needs to be taken down.  I have a horrible feeling it will indeed have to be cut down, which means this could be my last opportunity to make maple syrup from it.  And I’m going for it. 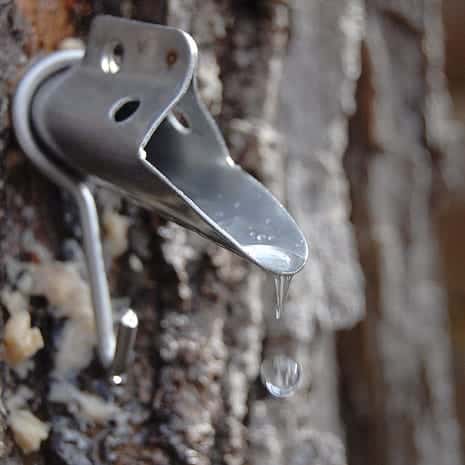 How Do You Make Maple Syrup at Home?

It’s easy really, and it make sense.  People who own sugar bushes are in the business of commercially producing maple syrup.  You’re not.  You just want enough for your family to pour the golden, sweet, elixir on French Toast throughout the year.  Maybe make some salad dressing or maple bourbon BBQ sauce.

A single tree (a large one) will produce several bottles of maple syrup for you.  The exact amount depends on how good a year it is for sap runs.  The weather plays a large part.

You’ll get a nice amount of syrup if you have a tree large enough for 2 taps.

Now all you need to do is figure out if you have the right kind of maple tree for tapping (most will work!) and how many taps you can put on it based on the size.  That’s right.  You don’t need a Sugar Maple.  I don’t have one!  I have a Black Maple.

If you’re thinking about tapping your one or two trees ….

Go to the How to Tap a Maple Tree post to find out of you have the right kind of tree and how to tap it.

When’s the time to tap a maple tree?  Sap starts to run when night time temperatures are below freezing and daytime temperatures are above freezing.  Around here that usually means the end of February.  Once the weather gets too warm and the tree starts to go into bud you have to stop collecting sap because the syrup will be bitter.  Icky.  Grossy.  You generally have about 4 weeks to collect sap before the weather stops cooperating and your drilled sap hole starts to close up.

How long does it take?  I tap my tree and then once a week I boil whatever amount of sap that I’ve gathered down to syrup.  On the weekend I pour all of the buckets of sap I have into an evaporation pan and boil it down outside.  I use a propane burner and a shallow pan that gives the sap a lot of surface area which makes boiling it down a quicker process.

Can sap go bad?  You bet it can. That’s why I make syrup every weekend instead of saving up my sap and doing a big huge batch.  Sap can be left outside in the shade while it’s still cold out and it will be fine for about a week. After that you’ll see it will become cloudy and isn’t good to use anymore. Taste it. You’ll see.  Sap CAN come out of the tree cloudy especially nearer the end of the run. This sap is fine to use as long as you taste it and there’s no sign of bitterness.

IF YOU KNOW YOU WON’T HAVE A CHANCE TO BOIL YOUR SAP WITHIN A WEEK you can freeze it until you’re ready to use. 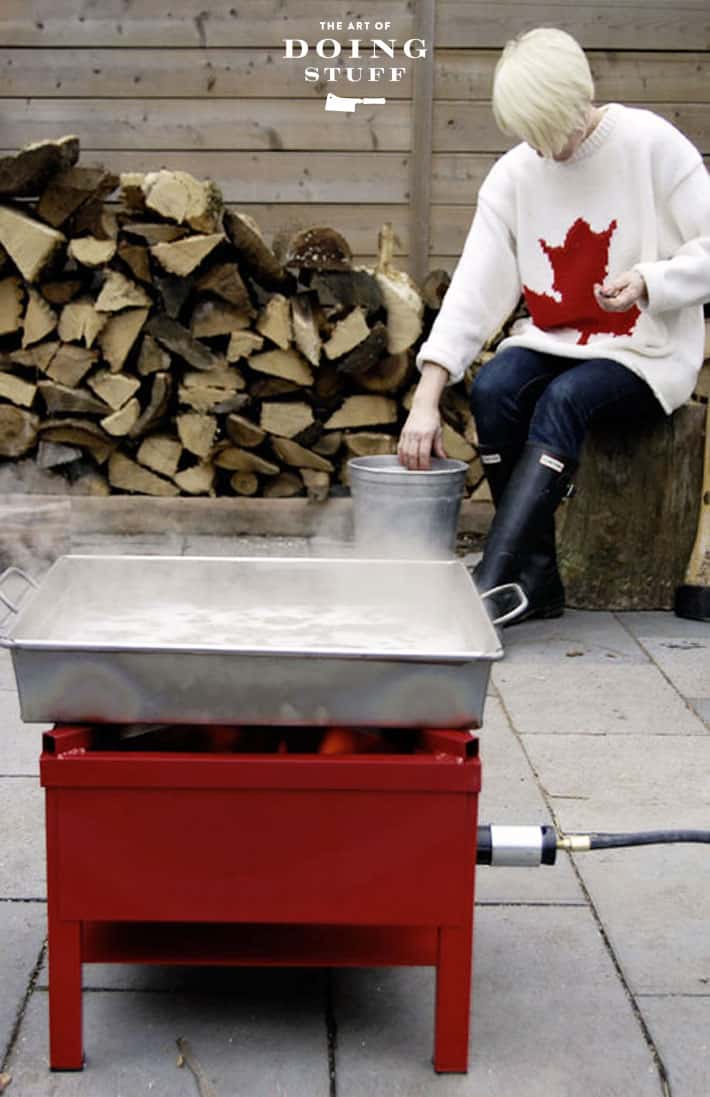 How much do you get?  In GENERAL each weekend I’ll get around 2-3 cups of syrup from this one tree.  I do this for 2 or 3 weekends in a row which means I get on average around 6-9 cups of syrup from my maple tree during any given year.

There has to be more to making syrup than boiling it down. That’s kind of true.  To make maple syrup you really are just boiling down sap and getting rid of all the water so you’re left with the sugar content.  Sap naturally has sugar in it but it’s so diluted from all the water you can’t taste it.  Boil away the water and you have sweet goodness.  But you DO need to know about when to stop boiling it and a few tools to help with this.

You’ll need things like some paper filters, a digital thermometer, and a hydrometer or refractometer.

This post covers everything you need to know about  How to Turn Sap into Syrup.

With those two posts I’ve recommended you’ll have all the information you need to make small batch maple syrup.  One tree is all you need.

If you have even one INKLING of interest in making your own maple syrup DO IT.  Do it right now before you forget about it and season has passed.  For the love of pancakes and french toast, do it!

Can’t be bothered to track all the stuff you need down?

THERE’S A MAPLE SYRUP STARTER KIT.
You can order an entire starter kit from Amazon that has 3 buckets, 3 lids, 3 spiles, a drill bit, filters and an instruction book for $104. 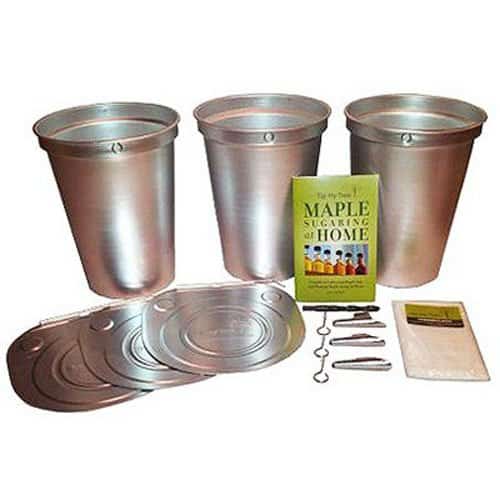