That’s right, more ideas for outdoor decorating because there is a chance that your front and backyards will be the farthest  you travel from home this holiday season. So for your own mental health, I think you should make your Covid compound as nice as possible. 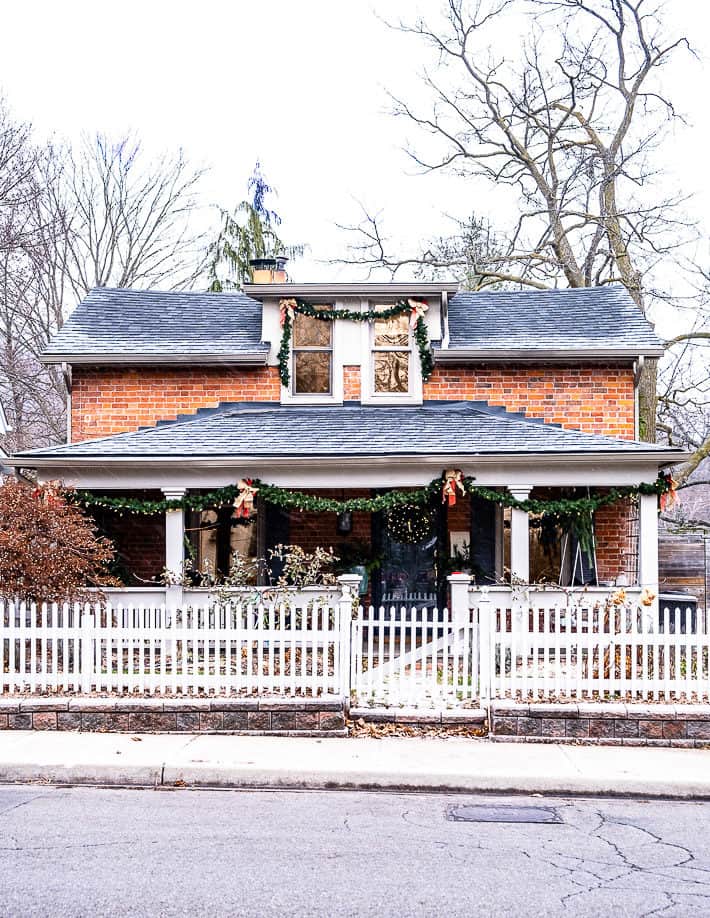 I think this post is a really good example of the difference between classic Christmas decorating and a trendier look. Or as I call it “Pinteresty”. You know the look. Everything just so, and perfectly placed. A pair of clean Hunter boots standing at attention by the front door even though everyone knows if you pulled your rubber boots off by the front door they’d go windmilling across the street and land in a tree the second the suction released.

The only reason they don’t do that when you take them off in your house is because there are walls to stop them.

Over the years I’ve dabbled in both looks, classic & Pinterest, but it’s the classic look that I always go back to.

Having said all that, these Christmas planters I’m going to show you how to make are classic, but with a bit of an update.

What makes these different than your average classic Christmas planters are the bottomless glass boxes I made to go in the centre of them. I’ve done this particular type of planter a couple of times over the years.

The glass box is just 4 panes of thin glass (thin glass is less likely to break from changes in temperature) that’s been siliconed into a square.  I outline how to do it in my post on how to make a personal tabletop fire pit. 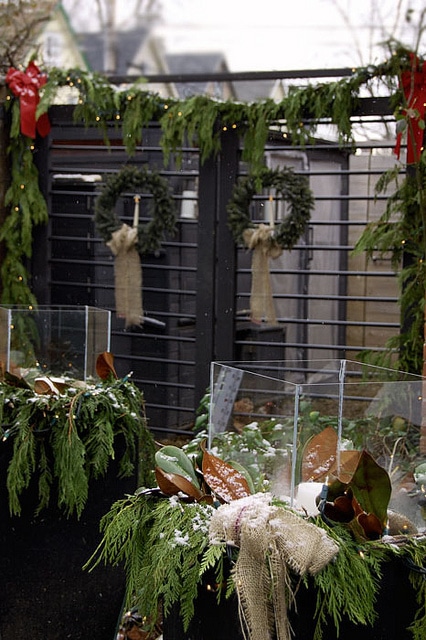 During the month of December the glass boxes hold battery operated candles that come on at dusk and go out at midnight. The glass around them reflects the light so it looks like it’s dancing around.

WE’RE GONNA HAVE TO TALK ABOUT CANDLES NOW.

If you like this idea enough that you’re already thinking you’d like to do it, take this advice about the candles: Buy candles that hold C cell batteries. Most battery operated candles require AA batteries, which aren’t as strong. This means that they’re nice and bright for the first week or so and then they quickly start to dim. By the end of the month they’ll still work, but they’ll be a lot dimmer than there were at the beginning of the month.

To combat this, use candles that work with bigger batteries.  C cells will maintain enough power to keep the candles bright for much longer.

This is one of the few C cell battery operated candles on Amazon right now. It’s also made of resin and not wax which means it won’t melt in the sun.

On Christmas Eve before my guests are about to arrive ( which is always precisely 1 hour after the time they were supposed to arrive) I swap out the candles for FIRE. 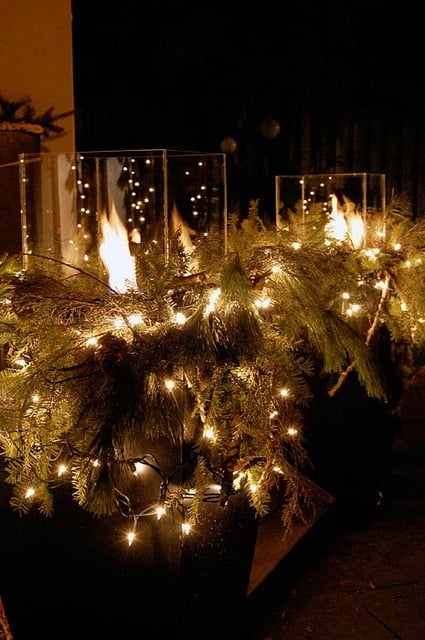 The flames are indeed real fire. I use gel cans specifically made for gel fireplaces. If you’re in Canada you can get those for around $6 each at your local Canadian Tire or here in the United States.

If you’re looking for something spectacular for your planters, you can’t get much more welcoming and spectacular than two fire pit planters flanking your door.

Just because your planter is modern doesn’t mean you have to put a modern arrangement in it. 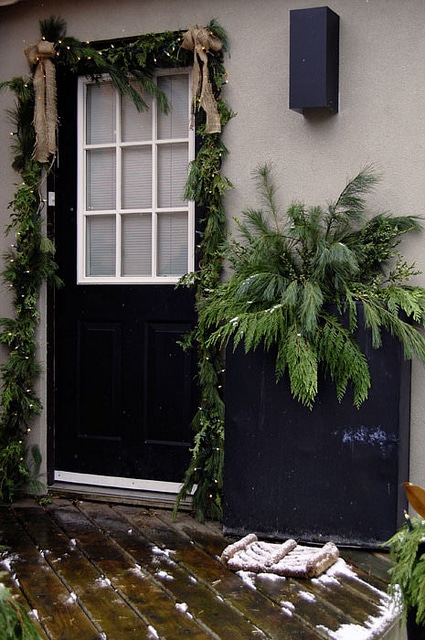 The shapes of the planter and outdoor light are modern, but the greenery is very traditional. And I like it. I’ve done more modern greenery arrangements in this planter by my back door but for my 1840 house is just feels a bit too stark. 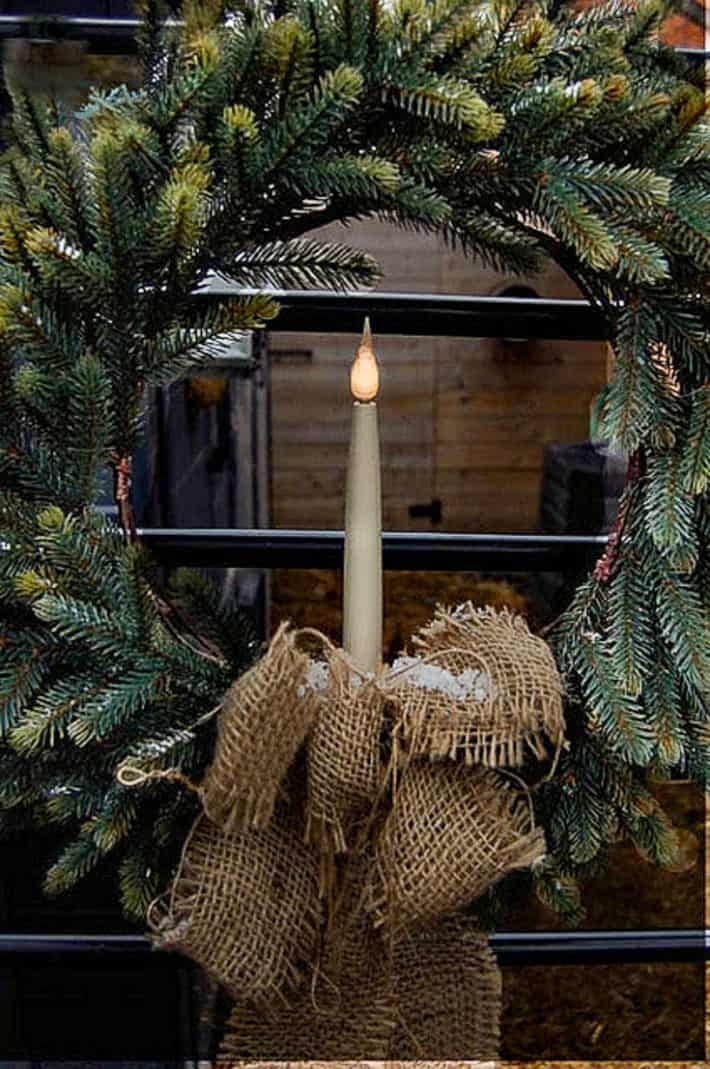 More battery operated candles, because they exist and a real candle would burn your house down. Everybody likes candlelight but nobody likes running into swarthy firefighters in their front yard while wearing their pajamas.

One of the most classic Christmas decorations is a candle inside a wreath.  It took a bit of glue and wire to get the candle to stay in place and upright but it worked.  All evidence of the bumpy mess underneath is covered up with a burlap bow.

I will be wearing a burlap bow on my ass by the end of Covid.

Now is where we’re getting into Pinterest territory. The look is still pretty classic, but with nod to your gold plated Pinterest scrolling finger. 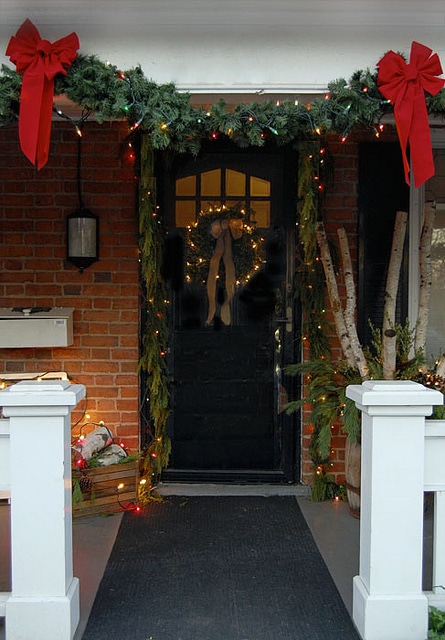 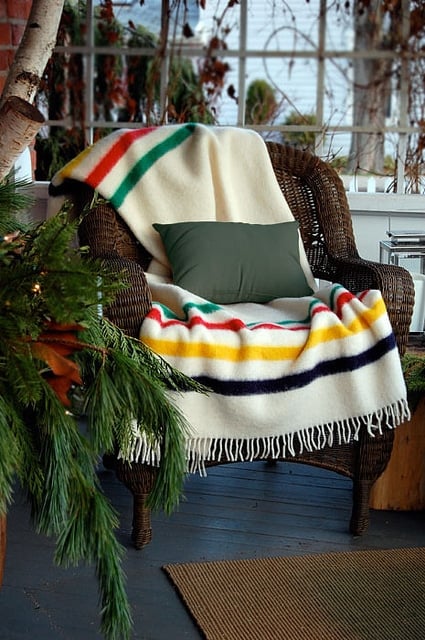 And even if I did have a blanket outside for huddling under while holding a steaming cup of (too 1990’s),  (too early 2000s),  Matcha tea, the blanket would be more rumpled.

Now looking back on it, this feels way too set up for me now. But I liked it then. If I did it again, like I said, I’d make things look more lived in. Not so perfect. Not so Pinterest. 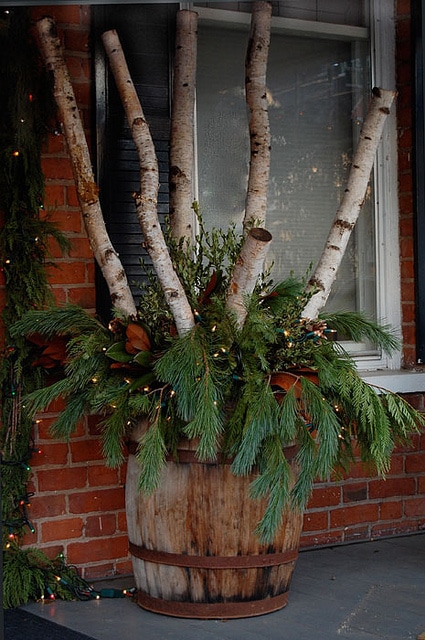 Birch branches gathered from a fallen tree at the cottage a decade ago. I’m over using any birch branches or logs for Christmas decorating but for some reason I still like it when they’re outside of businesses. Just not my house. 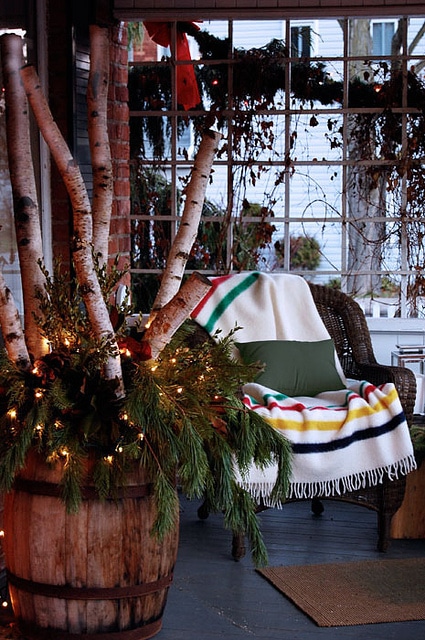 Up next is where I reallyyyyyy throw down with Pinterest. 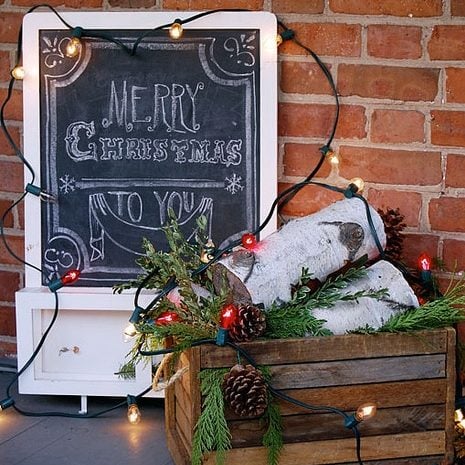 That’s the 2012 Pinterest trifecta PLUS a bonus one.  The thing is – I do think it looks cute. And maybe that’s the problem with me and Pinterest decorating.  Everything is cute. It’s appropriate and perfect and doesn’t reflect any of the down and dirty aspects of real life.

Not that classic Christmas decorating screams, Shit, I have to renew my driver’s license, drive the kids to hockey and clean up all the dog poop in the backyard, it just doesn’t give me the feeling that it denies those things exist.

And that concludes my philosophical discussion of the existence of soul in classic Christmas decorating versus Pinterest.

Wow, I bet you’re soooooo sick of reading about this topic, I mean EVERYONE is writing about it. 🙄😂 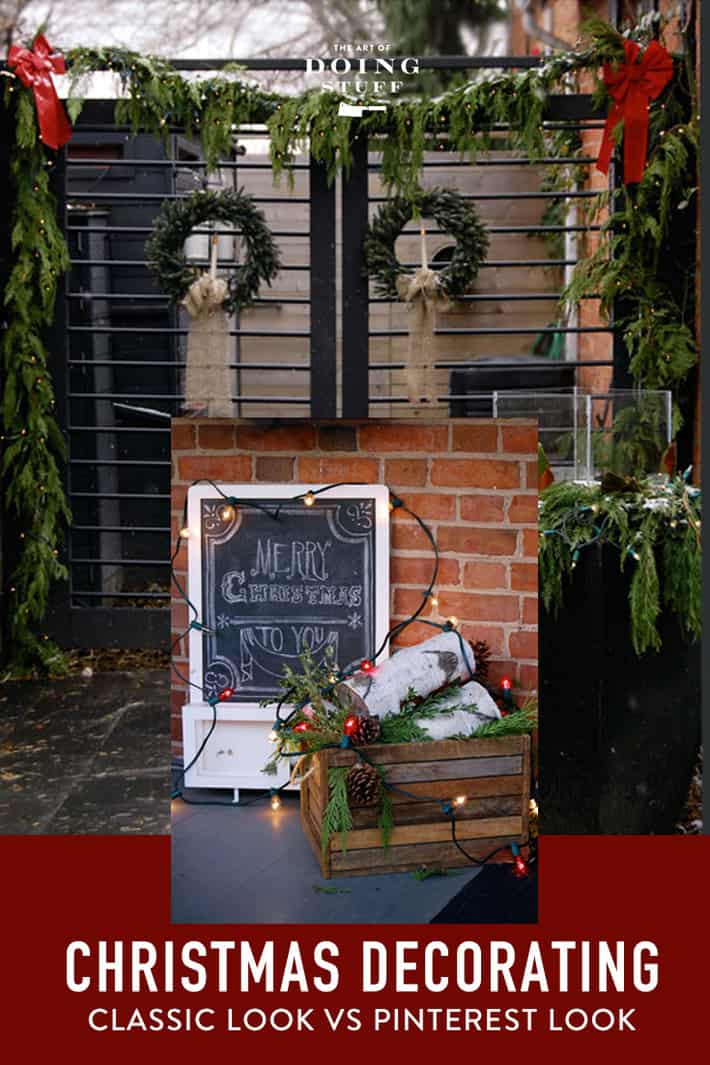