New Foods! Your photos and stories.

Scallops I’ve tried before, but only once actually. But I’ve wanted to cook them at home since every cooking competition show in the world seems to think they’re some kind of staple.

So I did. I cooked scallops.   I didn’t brine them like Joel of Well Preserved told me to because I just plain couldn’t be bothered.  These were a starter to a much larger dinner and brining the scallops would have put me over the edge.

They turned out well regardless.  I heated a non stick pan to HOT, HOT, added some oil and butter and let it get HOT, HOT.   While that was happening I dried my scallops with a paper towel and seasoned them with salt and pepper.  Then I dropped them in the pan.  I cooked them for a couple of minutes on one side and a few on the other.

I took them out of the pan, added a bit more butter to the pan so it would melt and then spooned the juices in the pan over the scallops.  Topped with salt, pepper, a squeeze of lemon and some grated lemon rind. 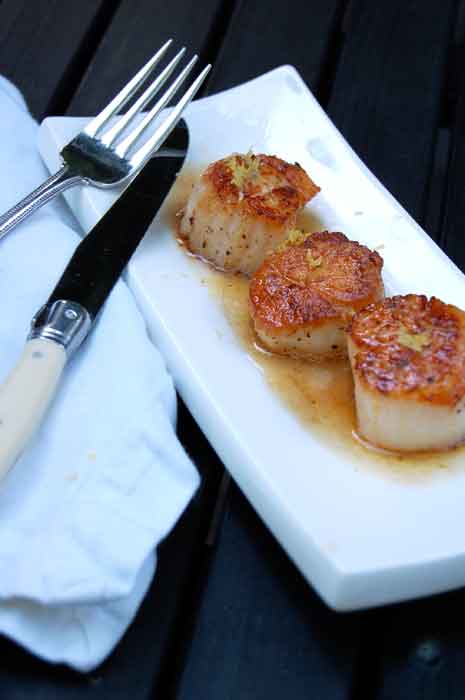 I’d still rather eat lobster or crab. But these were good and about as easy as cooking gets.

Some of you … did not go the easy route. Some of you made 7 new things last weekend!  I was SO impressed with how many people took this assignment to heart and made something new.

My sister is always stunned at how many times she comes over and I say I’m just cooking something I’ve never tried before  She says she never tries anything new.  But if you don’t try new recipes you’ll never have new things to add to your “go-to” repertoire.  There are a lot of disgusting dinners, but it’s worth if if you can find that one thing you really love.

Without further delay, here are the results of the homework assignment.

Congratulations to all. You all get an A+.